The Con Clown John Baird and the Dangerous Ukrainian Crisis 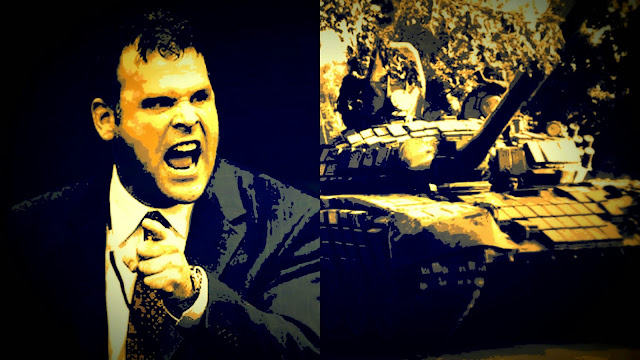 The situation in Ukraine couldn't be more ominous, with reports that some Russian troops have crossed into that country.

World leaders like Obama are calling for calm, refusing to call it an invasion, and ruling out military action.

The need for cooler heads to prevail has never been more urgent.

So what is our ghastly Con Foreign Minister John Baird  doing?

Answer: blowing hot air out of every orifice, and fanning the flames of war.

Not just by escalating the rhetoric, even as Canadian warplanes edge closer to Russian airspace.

But also by instructing his equally warlike flunkies at NATO to mock the Russians with tweets like this one:

Geography can be tough. Here’s a guide for Russian soldiers who keep getting lost & ‘accidentally’ entering #Ukraine pic.twitter.com/RF3H4IXGSp
— Canada at NATO (@CanadaNATO) August 27, 2014


And despite screwing up their Russian geography.

A sarcastic tweet from Canada’s delegation to NATO instructing Russians to be mindful of their national borders was apparently itself wrong about the geography of Eastern Europe.

The Moscow Times, an English-language daily, pointed out Thursday that this “map fail” excluded not only Crimea — which Russia controversially annexed from Ukraine in March — but also Kaliningrad, an exclave* north of Poland and west of Lithuania that has been part of Russia since the end of the Second World War when it was captured from Germany.

Although the territory’s military significance has declined since the end of the Cold War, Kaliningrad still houses the Russian Baltic Fleet at the port of Baltiysk and is very much part of the Russian Federation.

Not just refusing to back down. Or tone it down.

But actually patting himself on the back:


Kudos to @CanadaNATO for their #digitaldiplomacy work... this basic but timely #Ukraine graphic has 23000 RTs so far! pic.twitter.com/i3LL5rfUxp
— John Baird (@HonJohnBaird) August 28, 2014


And by so doing making a complete IDIOT out of himself... 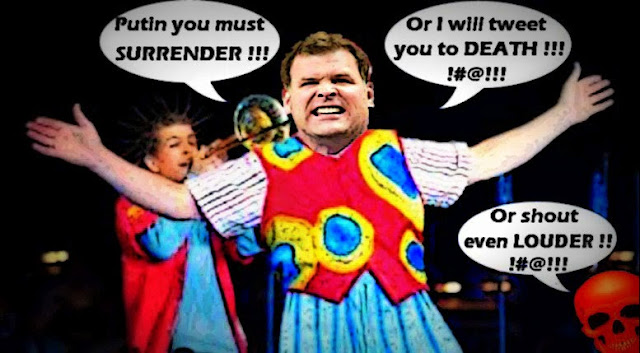 For if retweeting something like that 23,000 times, for the sole purpose of provoking the Russians, is to be considered a glorious victory, victory is cheap indeed.

And if our NATO contingent can't even come up with an accurate map of Russia, we're in trouble eh?

But then as we know, Baird's Con clown act has nothing to do with the real needs of Ukraine, or the real danger of the equally desperate Putin.

And everything to do with making Stephen Harper look like a Great Strong Leader.

You know, this monstrous piggy poseur... 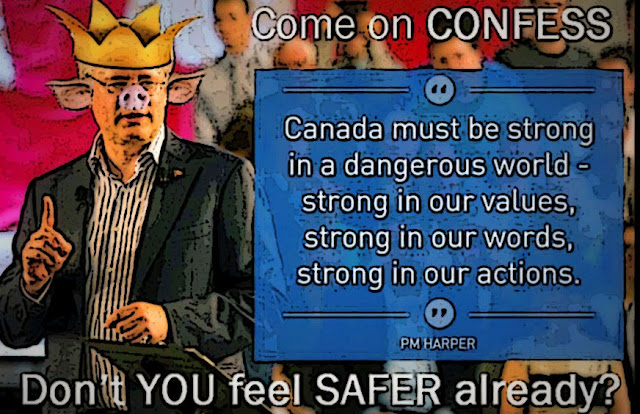 For the sole purpose of trying to win the next election by seizing the ethnic vote.

And while that pathetic effort might at some other time, and in some other place, be totally hilarious.

It's not funny when tensions are running so high, and the danger of a catastrophic superpower confrontation, even the Third World War, is so chillingly obvious.

Because while it's true that Putin's ambitions must be restrained, so must the  actions of the government in Kiev, which is also responsible for this escalating crisis.

A lack of balance or pouring fuel on the flames can only make things worse or even more dangerous.

And one really has to wonder how far the increasingly desperate Stephen Harper might go to try to boost his sagging polls.

And where all this crazy rhetoric might lead us... 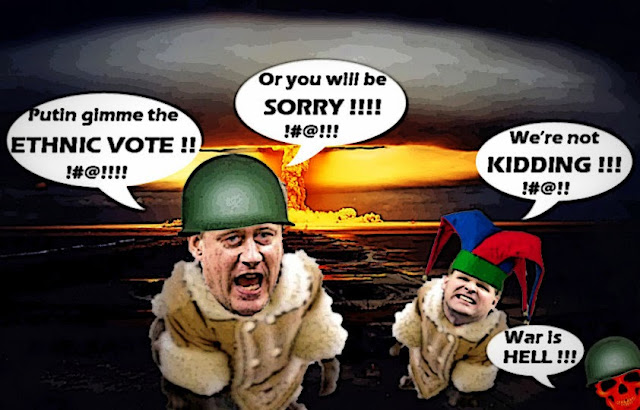 And has been for a long time.

Until the glorious day they are finally defeated...

Harper is aware Margaret Thatcher won an election by going to war. Would he put huge numbers of lives at risk to win an election? Do we really have to wonder about that?

Some things you are forgetting, Simon.
Crimea held a referendum vote that passed by a huge majority to return to the Russian Federation. O-bomb-a didn't like it so he called it a rigged and illegal election. Talk about the pot calling the kettle black!
All of the Russian relief trucks (you kow: the ones harpie called an invasionary force) that entered Ukraine were checked by Ukranian soldiers at their borders prior to entry and found to be carrying NO munitions or troops into Ukraine.
Even that idiot fucking 'murkan-invested excuse of a preznit that has even the Ukranian Kiev forcves defecting like crazy now, Porcine-schencko, admitted almost immediately that he lied about Russian troops invading Ukraine within the last couple of days.
Can't the idiots in Ottawa read and, if so, don't they process the big words easily? Wait, I think I may have just asked a totally needless question. If they could, they would but they can't, ergo they don't.
Man, I can't believe that after the way baird the bozo fucked everything he touched here at home, harpie installed him as foreign minister to represent this country. Of course it could have been to get that embarrassing clown further from the spotlight, too.
Even my friends in Lower Slobovia are laughing their asses off at us now.

The situation in Ukraine is beyond Canadian understanding. There is some kind of separation crisis going on. Democracy as bad as it is in Canada can not be compared to the democratic process in the Ukraine. Governors of provinces are appointed by the central goverment, There is no Federalism there. Putin is a KGB thug, but he straightened out Russia and stopped the theft of the kleptobeaurcarats. In a real democratic election in Russia Putin would win in a land slide. Imagine a guy 200 lbs lighter than Rob Ford who had graduated from the the finest schools with a masters degree, not merely applied and dropped out.
Putin can speak at least three languages and kill you bear handed. Rob Fords only move is to sit on you and hope the position leads to axyfiication.

Harper picks those who he can control and Baird does exactly, as Harper tells him to do. Harper has a list of degenerates, as long as his arm. Some are in prison, others are on their way. Harper's favorite degenerates are, sent to the U.K. Gordon Campbell is already there for some years now. Campbell will now have Nigel Wright for company.

There are Ukrainian fascists and as we all know, Russians detest fascists. Putin out and out called Harper a fascist. Harper was of course, trying to drive a wedge between Europe and Russia. Harper is rabid to sell Europe, his Bitumen and NG.

Harper and Baird have insulted and angered, many other countries. Other countries detest Harper for his bullying and his hissy fits when, he doesn't get his own way.

Perhaps Baird would like to spend a couple of minutes in the same room with Putin. He wouldn't last 20 seconds. Baird simply doesn't understand going to war with Russia, is no small thing and there is no guarantee, Russia wouldn't win. Obama has the right idea.

Baird might also want to consider, there won't be a big line up of Canadians willing to go fight. They saw what happened to the last batch of Veterans--neglected, underpaid, and kicked to the curb without benefits and/or support. No, if Baird, wants a war, let him get into the ring with Putin and see if he can last 20 seconds, even in a screaming match. The Russian Bear is dangerous and tough. Don't underestimate him. Baird also might want to look in the military equipment closet. There isn't much there to do any fighting with and trust me, Obama isn't going to be lending out equipment. This is Europe's problem to solve. When Germany and France decide its time to fight, that will be soon enough. Until then Baird ought to keep his mouth shut. He's fouling the air.

As much as all you delusional idiots think that Putin is a "good guy" you ignore the fact that its Russian troops pouring into the Ukraine.
Putin isnt doing this for the greater glory of Mother Russia.
He's a dictator covering his own ass.
Pure and simple. Lets look at where Putin came from. A former army officer who showed talent. The secret police formerly known as the KGB took him under their wing where he excelled. Retiring as a Major(no small feat) before the former Soviet Union fell. He knows where a lot of skeletons are buried.
His political rise was fast and unusual. He served the maximum two terms allowed under the new Russian constitution and then had to step down. He appointed one of his lickspittle lackeys as leader of his party. That man became the new president and appointed Putin Prime Minister. Putin pulled the strings. Immmediately after his puppet finished one term he resigned. Putin stepped back in as leader of the party.. He's stifled all political disssent, Russian reporters critical of his regime have been murdered . He gets elected again.He's estimated to have over 1 billion dollars in various bank accounts( not bad for a person supposedly on a salary of $400,000. per annum.
the Russian economy during his 1st two term was booming. everything is different now. The Russian economy sucks.
Whats a good way to get people to focus their attention on something else? Lets start a war with a small country that we can beat! hey, it worked for George W didnt it?

Obama doesnt want to send US troops in but if NATO, due to treaty obligations , actually pulls its head out of its ass and grows a spine. We could ALL be in the shit.

But if I had to take my choice between Putin's lies, corruption , and murders or Baird's bullshit. I'd take Bairds bullshit.

because at least under Harper your still ALLOWED to have politically critical Blogs..........