The Orlando Massacre and the Doctor's Bloody Shoes 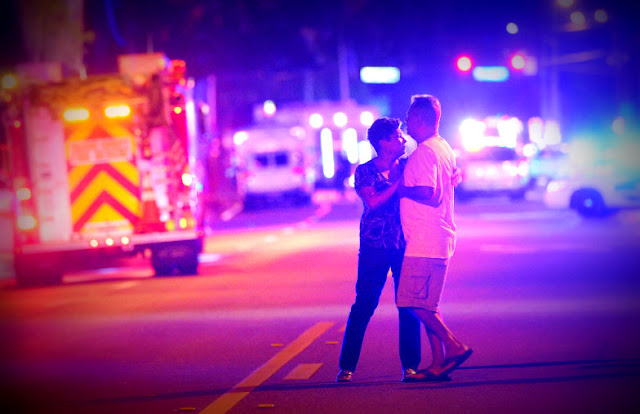 When I saw the first pictures of the Pulse nightclub shooting, and I saw the ambulances converging on the scene.

And then because there weren't enough of them, I saw the wounded being loaded onto the back of pick up trucks.

Two thoughts went through my mind. What bloodthirsty maniac did this?

And how are the hospitals going to handle the load?

And this is how they did it at the Orlando Regional Medical Center.

The first victim of the nightclub shooting arrived shortly after 2 a.m. and was relatively stable, giving doctors on the overnight shift hope that any others would not be severely wounded.

Then five more came, in much worse shape, and then more and more, until even hardened trauma surgeons and nurses were brought to tears by the sight of so many bleeding people lining up in the emergency room.

In a manner that couldn't be more heroic or more moving.

Choking up a bit, the attending trauma surgeon on call that night, Dr. Chadwick Smith, described at a news conference on Tuesday how he called for reinforcements.

And these are the bloody shoes of one of those heroes Dr Joshua Corsa.

"These are my work shoes from Saturday night. They are brand new, not even a week old," he wrote. "On these shoes, soaked between its fibers, is the blood of 54 innocent human beings. I don't know which were gay, which were straight, which were black, or which were hispanic. What I do know is that they came to us in wave upon wave of suffering, screaming,and death.And somehow, in that chaos, doctors, nurses, technicians, police, paramedics, and others, performed super human feats of compassion and care.

There is still an enormous amount of work to be done. Some of that work will never end. And while I work I will continue to wear these shoes. And when the last patient leaves our hospital, I will take them off, and I will keep them in my office. I want to see them in front of me every time I go to work. For on June 12, after the worst of humanity reared its evil head, I saw the best of humanity of come fighting right back. I never want to forget that night.

And then as if that wasn't enough, when the call for blood went out hundreds of ordinary citizen answered the call... 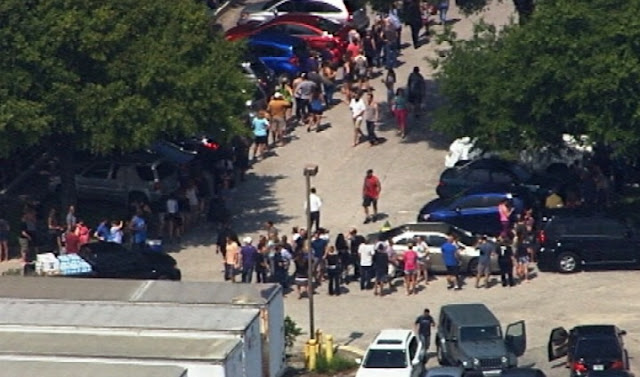 Lining up for hours on a brutally hot morning to give the gift of life.

And yes, that's why my heroes are healers not killers. And why we are going to defeat the hate mongers.

Because we choose life over death.

We belong to the human family.

And we are so much better than them...

Props to the first responders and ER workers, it's not their fault that their patients are still screwed!

Thanks to the GOP's hatred of Obamacare, Florida remains a non-expansion state. What does this mean? It means most of the surviving shooting victims are running up very large hospital bills they won't be able to pay. Assuming they aren't able to organize enough bake sales and online crowd-funding, this means many will be forced into bankruptcy. It's what they call "compassionate conservatism" - you get to live, but without a penny to your name.

hi anon...I hadn't thought about that. Although with Rick Scott Mr Private Healthcare as governor I should have remembered. But I did read about how some medical services were being provided free and one can only hope that the victims will be treated with the compassion they deserve...

Hundreds line up to give blood for people that live a lifestyle that prevents them from being able to give blood when anyone else needs it. Where are the hundreds of people lining up to give blood for our soldiers that are fighting for our freedom? Where's the constant news coverage and tears for those we don't know when it comes to our soldiers getting blown to pieces for the sake of our freedom. And where was the Christian Flag when the Christians in Charleston were gunned down for their Christian beliefs? Yet everyone is flying the rainbow flag and we are supposed to just give support to the lgbt community now. They weren't ALL gay. Some were just supporters of that lifestyle. Why not just fly the American flag since they were all american? Enjoy playing into the Obama/Clinton agenda.