The Day Stephen Harper Was Pounded By the Supreme Court 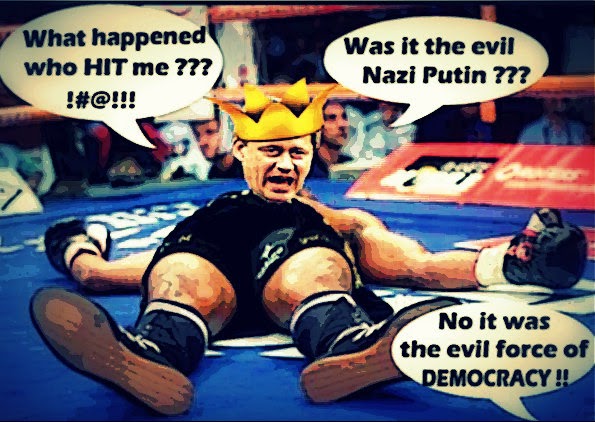 Well it's lucky he is in Ukraine challenging Vladimir Putin to  come and fight him.

Or doing whatever he can to inflame the situation and win the ethnic vote.

Because if he was in Canada, he'd be lying on the canvas after being pounded by the Supreme Court.

The Supreme Court has dealt a stunning blow to Prime Minister Stephen Harper, ruling that his latest appointee to that court, Justice Marc Nadon of Quebec, is not legally qualified for the job.

The court ruled 6-1 that the purpose of the special appointment rules for Quebec judges is “to ensure civil law expertise and the representation of Quebec’s legal traditions and social values on the Court, and to enhance the confidence of Quebec in the Court.”

For nobody should underestimate the humiliating drubbing he has just received.

Not only did the Court reject his candidate, and declare him unqualified to serve. It also slapped down Harper's attempts to go around the constitution.

And it asserted the independence of the Court, and reaffirmed its status as the last bastion of our threatened Canadian values.

William Trudell, a Toronto lawyer, said the ruling made him proud to be a member of the legal profession. "Mr Harper is not above the law, and cannot shape it or ignore proper processes to fit his political agenda. True ‘law’ and especially ‘order’ has been protected by the Supreme Court of this remarkable country.”

For let's not forget that the only reason Harper appointed Marc Nadon was because he was the only judge who agreed with the shabby way the Con regime has treated Omar Khadr... 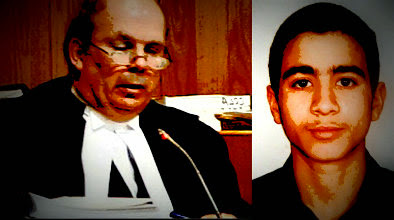 His most noteworthy ruling came in the war-crimes case of Omar Khadr, a member of al-Qaeda who was captured at 15 in Afghanistan and held at the U.S. naval base in Guantanamo Bay, Cuba, for eight years.

Canadian officials travelled to the base, interviewed the teenager without giving him access to counsel and passed on the fruits of those interrogations to the prosecution at a time he was facing a maximum of life in prison.

Of 13 judges in three Canadian courts who heard the case, only Justice Nadon refused to criticize Canada. The Supreme Court excoriated the Canadian government — unanimously.

Even though Khadr was a child soldier, his rights as a Canadian citizen have been violated in the most sickening manner.

By failing to recognize that, Nadon rendered himself morally unfit to serve on on the country's highest court, whose supreme duty it is to protect the basic rights of all Canadians.

And by trying to force Nadon upon that court, even if it played into the hands of Quebec's separatists, Stephen Harper has proven without a doubt that he is unfit to be a Canadian Prime Minister.

Paul Daly, who teaches administrative law at the University of Montreal, called the ruling “a huge day for the Canadian federation. This is a ringing declaration from the Supreme Court of Canada on the importance of Quebec’s distinct character and how important it is to protect it.”

That declaration is especially important during Quebec’s election campaign, where separation is at issue.

The ruling also means that Harper's attempts to reform the Senate without the consent of the provinces are almost certainly doomed to failure.

And all this so soon after the Supreme Court gave his Con regime another slap in the face for trying to retroactively abolish the right to early parole. 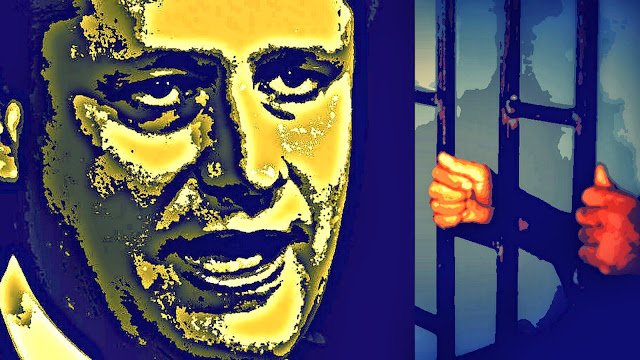 The Supreme Court of Canada has ruled a federal law passed in 2011 that retroactively abolished accelerated parole review for offenders who had already been sentenced violates a person's charter right to not be punished again.

Today's decision strikes down section 10(1) of the Abolition of Early Parole Act and means all those sentenced prior to March 28, 2011 may qualify for accelerated parole.

Which is something you would expect in a police state, not a would be democracy like Canada.

It must surely make Canadians wonder what kind of country we would be living in,if we didn't have a precious Canadian institution like the Supreme Court to uphold our most cherished values.

It leaves Harper and his Cons battered and bruised and sounding absolutely pathetic.

In a statement, the Prime Minister’s Office said it was “genuinely surprised” by the ruling, and will review its options.

Because if they were "genuinely surprised" by the ruling, they are clearly more incompetent than even their harshest critics could have imagined.

They have left the Supreme Court in a weakened state until a replacement for Nadon can be found which could take months.

The court has been operating with just eight judges since the retirement of Justice Morris Fish in August, meaning a larger workload for each judge and the prospect of tie votes.

And of course for those of us who believe in a better Canada, the implications couldn't be more obvious.

Or we remove that foul Con regime and its depraved leader from power by whatever legal means necessary, and as soon as is humanly possible.

Or he will continue to try to undermine the Supreme Court, try to turn it into his willing tool by appointing one stooge after the other.

And destroy the last bastion of our democracy... 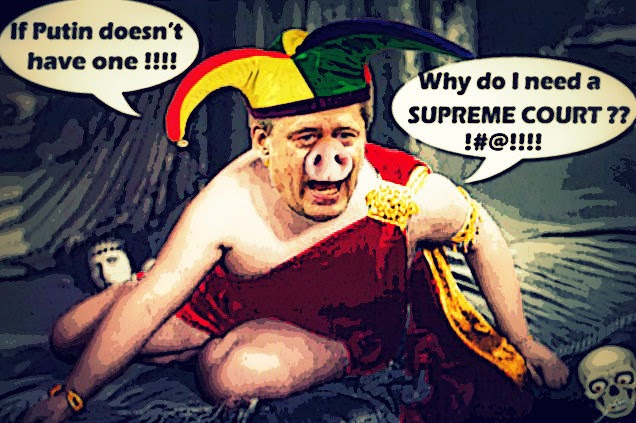 He's out of control, he's desperate, he's capable of ANYTHING.

Now more than ever, work to defeat this lawless maniac.

And make our Canada safe again...

It's a good day for Canadian citizens..and another round of eating crow (poor crow!) for Harper..waaaahhhh!!!!!
Bet Obama is wishing that his Supremes were as supportive of the US Constitution as are ours..and it's equally wonderful to realize that Harper attempted to 'stack' the Court with rightwing judges..but, who could have even fantasized that they actually decided to do the other 'right' thing and slap the PM down. Enjoy the Ukraine, Steve, we can only pray it's a one way ticket...

Who was the supreme that supported Nadon and did he have to justify his decision? that diverse decision may make interesting analysis but just to reassure me, it was not a judge named Toews, was it? Anything would not surprise me in Harpanda.

While I am happy and dancing the Supremes upheld the Law, I wonder how we could have sunk so low as to suspect they would be able to do anything else.

hi mizdarlin...It certainly is a great day for all the reasons you mention. It's also a big victory for federalism and I understand both Harper and Madame Marois are extremely disappointed. The fact that three of the judges who ruled against him were Harper appointees only makes it even better. For it shows that our Canadian values are deep rooted, they will help us survive this dark time, and sooner rather than later they will lead us to victory...

hi Steve....ah yes the Kochtopus. I have done several posts about them and I thought the last one was the most enjoyable. It was about how one of the members at a secretive Koch gathering left his or her notes behind in the hotel. And they were most revealing. They exposed a network of billionaires and climate change deniers working hard to subvert everything we believe in. Today we can only expose them, but the day will come when we will jail them...

hi Filcher...the one judge who dissented was a Harper appointee, but from what I understand his main argument was that Nadon could join the bar in Quebec, practice for one day, and become eligible the next day. I have since read it is not as simple as that, but it does give Harper a shabby way out so we will have to see what he does. No normal PM would do that of course, because it would debase the Supreme Court and render it illegitimate in the eyes of many, especially in Quebec. But Harper hates the Supreme Court so much he is capable of anything...

Nadon has been collecting a salary since he was named. It's now up to the registrar of the Supreme Court to decide whether he has to pay the money back, likely the first time the court has ever faced this question. Nadon's annual salary would have been $351,700. He was named in October, so has been receiving a pay cheque for about six months.

One option the registrar is considering is having Nadon repay the difference between the Supreme Court and Federal Court salaries.