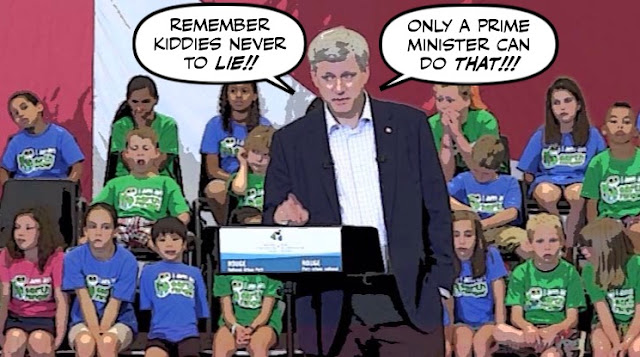 It couldn't have been a more disgraceful sight. Or one more pathetic.

Stephen Harper posing in front of a wall of fidgeting and yawning children.

Admitting for the first time that the economy is in trouble.

But somehow managing to blame others.

Prime Minister Stephen Harper says the government will react with "strong fiscal discipline" to the "downturn" in the Canadian economy, which he blamed on the recent turmoil in the global economy. "Let me just state clearly what the situation is, there has been a downturn and the reason for that has been the downturn in the global economy," Harper said in Pickering, Ont.

And even more alarmingly dismissing suggestions from leading economists that he should stimulate the sagging economy, instead of trying to smother it with his slash and burn austerity policies.

And his deranged obsession with the deficit... 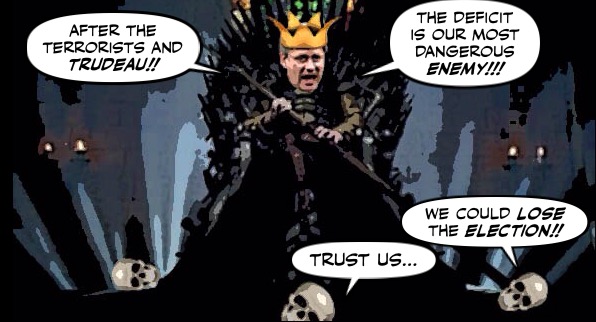 Harper added that the federal government will not "spiral ourselves into deficit" and face credit downgrades, create an "investment freeze" by hiking taxes on businesses or take away tax breaks to Canadian families.

"Those are things we don't do," he said. "What we are doing, is providing strong fiscal discipline with lower taxes and we will have very large scale investment going into the Canadian economy this month alone through the increased universal childcare benefits."

When in fact what's happening to the economy has very little to do with what's happening in Greece, China, or even the United States. Which is recovering from a  deeper recession much faster than we are.

The main reason our economy is faltering is because he ravaged our manufacturing sector with the so-called Dutch Disease, by putting all our eggs in one oily basket... 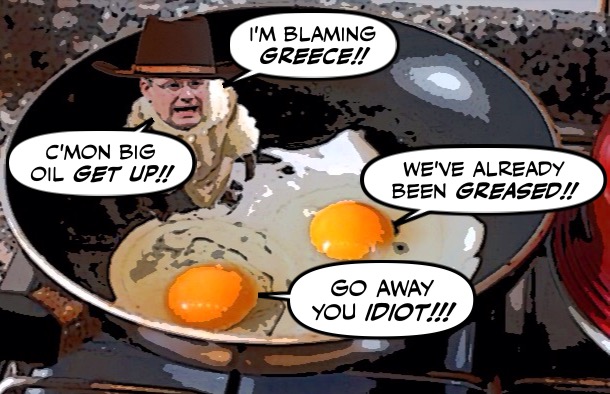 Only to end up with egg all over his face.

His puny porky childcare payments will do almost nothing to stimulate anything, except he hopes his sagging poll numbers.

And since the economy does need to be stimulated, and he's already in a deficit no matter what he says.

As Mike Moffat points out, rather than fearing it he should be embracing it.

Between four straight months of falling GDP and record trade deficits, the economic news coming out of Canada over the last few months has been rather grim. The slowing economy has all but certainly pushed the federal government into deficit position. Given the weak state of the economy, a budgetary deficit should be embraced, not feared.

The government could still hit its surplus if it so chooses, by deferring planned spending into future years. This would go against all economic logic, however, as the government should be putting additional money into a weakening economy, not taking it out. Tightening fiscal policy during a slowdown to meet an arbitrary budgetary target is completely counterproductive.

Slashing and burning to meet an arbitrary budgetary target can only damage the economy further, and lead us into the dark desert of another recession.

And as I pointed out the other day, his foul and incompetent regime's pursuit of a budgetary surplus which isn't there. 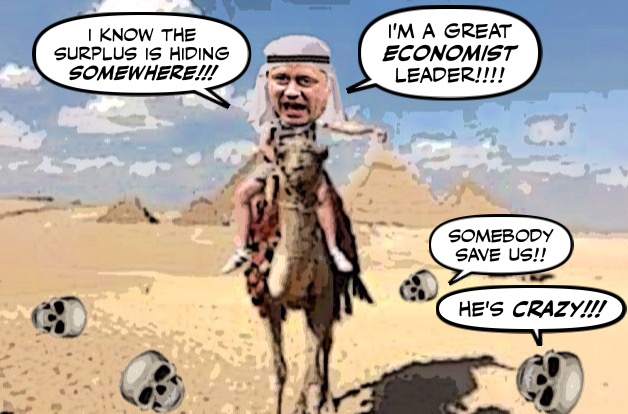 But then of course he doesn't care. All he cares about is winning the next election. And since he made deficit reduction the centrepiece of his economic platform he feels he can't back down now.

Even if he has to deny reality, or lie like a thief. Or a Con artist.

And the good news? By so doing he has trapped himself.

He can't do the right thing to save the economy and himself, for all the wrong reasons.

His incompetence will come back to haunt him... 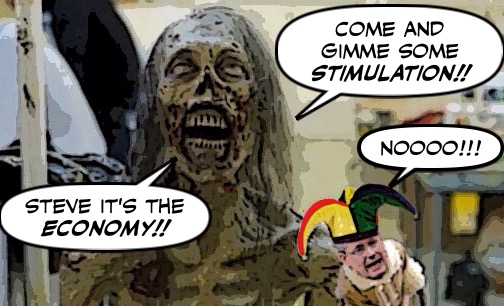 It will damage Great Economist Buffoon Leader beyond recognition.

And it will help us defeat him...

Absolutely incredible cynical use of child "Earth Rangers" as a backdrop to an speech on the dismal state of the economy.
http://www.earthrangers.org/about/
If only they could vote.
Of course nothing on the environmental file in the speech.
Current tar sand reclamation efforts still in effect.
http://www.cbc.ca/player/Shows/Shows/The+Rick+Mercer+Report/ID/2289329973/

This picture sums it all up perfectly.
http://imgur.com/wm7XAf7

discussing his piece, "How Harper Will Win The Election." Tune in from 8:30-9:30 a.m or listen online later.

"And since he made deficit reduction the centrepiece of his economic platform he feels he can't back down now."

His obsession with deficits is bazaar, Simon, as Hugh says he has had massive federal deficits every year since 2008. Given his logic he should be also be adding this conclusion to his statement that the federal government will not " spiral ourselves into deficit" and because our government has been the cause of the most and the highest deficits ever in the history of Canada, and we have spiraled ourselves into deficit I can only conclude that you should NOT vote for me in October. That is what in logic is called a syllogism. It goes like this. If Harper says to not vote for any party that causes deficits
and Harpers Party does cause deficits
then don't vote for Harper.

He is a profoundly dishonest man. He genuinely thinks that reality is what he can say it is. It is the core thinking of what drives a deceitful manipulator.

That pic of the kids there says it all.The same pic over at Ipolitics says even more.The young girl with her head down looks like she's ready to toss her last meal.And what with the guy wearing the light colored shirt,2nd row,is that sweat??...Really exciting stuff.Make no wonder he doesn't want to show his face at those other debates.
http://ipolitics.ca/

hi hinofan...yes it really was appalling how the Cons used such young children as props. Although I have to give the kids credit, they were the stars of the show. I've never seen such an amazing collection of cute children bored out of their minds, and wriggling and yawning as Great Leader droned on. They represented us well. As for Harper's speech it was simply pathetic. He's deflecting all blame for the state of the economy, and as for the environment he simply ignores it. Let us just hope that this living nightmare will soon be over....

hi Hugh....yes, the Cons are counting on the fact that many Canadians don't know the difference between the deficit and the debt. I only hope the opposition parties can make that clear, and what if means for future generations....

hi Noah...yes you're absolutely right. As I told hinofan I thought the kids were fantastic. I don't think I've ever watched a Harper newer and laughed so much. Next time, if there is a next time, they're going to have to stick a big sign on Harper's backside: "Sit still and smile or ELSE! !!!!" ;)

hi David...I've read Livesey's article a couple of times, and needless to say I found it quite a depressing experience. But while a lot of things he says are true, especially the part where he says Harper brings a gun to a knife fight and we don't, I think he underestimates the strong desire for change. For as history has proven again and again, when Canadians decide a Prime Minister has been around too long, it usually ends badly...

hi David...I don't know how you manage to come up with the right lyrics for every occasion, but it's quite a talent. But although I love Tom Petty, I feel like that guy in the box. And please don't give Harper any ideas or he'll assault our ears with that song as well... ;)

hi Pamela...yes it is bizarre. His Cons have delivered a deficit every year they have been in power, with this one being no exception, and still they would make deficit reduction a virtue and make it sound like they're doing a great job. But then he is the worst liar I have ever seen, and seems to believe that if he repeats a lie long enough people will believe him. But sadly for Great Leader polls show that most Canadians don't trust anything he says, so hopefully this is the last ghastly act....

hi anon...I took about ten screen caps of Harper and the kids, so I was able to run the one with the child on his right in the middle of a massive yawn. As I told hinofan the kids deserve a medal for reflecting the views of most Canadians so well...