Stephen Harper and the Harper Police 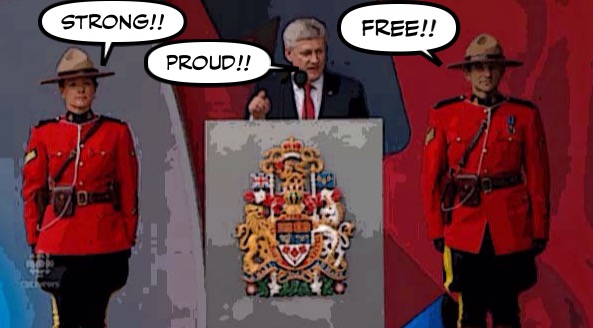 Well as you know, Stephen Harper has turned the RCMP into the Harper Police.

And sadly the Musical Ride isn't what it once was.

Is there no place now where Canadians can be spared the Conservative government’s jingoistic militaristic bleating with its conjured-up images of dangers lurking around every corner, nurturing the fear that “others” are out to rob us of our freedoms?”

But every now and then the Mounties still do get their man.

But of course, now that Bill C-51 has become law, the burning question must be:

Will he order the Mounties to arrest us for daring to defy his dictatorial ways? 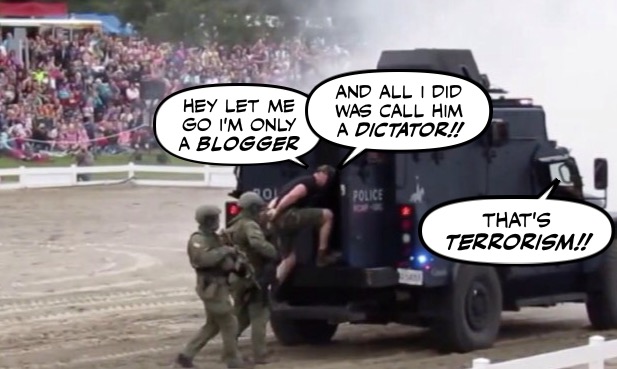 Or will we defeat the dictator before he turns us into a police state.


And order the Mounties to arrest HIM... 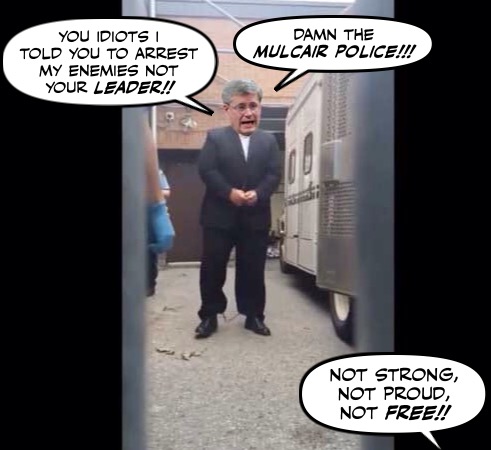 There was never a less Canadian leader. Or a crazier one.

Or one more dangerous...

The Cons last kick at the can, their anti union leg. may be the end of them. You can piss off a lot of people, but go after the Hockey players union, you have a problem.

The RCMP are simply an extension of the PMO. Will they arrest us, if Steve is re-elected. You bet they will. Harper must be happy today his good buddy Arthur Porter died in Panama. No need for a trial now and more secrets can be kept.

Out in B.C. Havey O. wrote a nice piece about it, on his blog, Keeping it Real.

That is so sick. I remember that Ride as a little girl decades ago. Beautiful horses and doggies. And smartly dressed young constables.

From 2006 to the present, Harper has gradually transformed The Royal Canadian Mounted Police into the Radical Conservative Mobilized Police.

"Lawyer Richard Dearden, representing Legault, presented affidavits, letters and email evidence showing that previous assurances from the Conservative government in 2012 were ignored as it pushed for the speedy destruction of all gun registry records outside the province of Quebec," the Montreal Gazette reported.

Legault issued a report earlier this year accusing the RCMP of breaking the Access to Information Act by destroying registry data that was still in dispute before the courts.

In return, the Conservatives rewrote the law, giving retroactive immunity to anyone who participated in the destruction of documents. That law, part of the omnibus budget bill, has already passed its final Senate vote.

It's an astounding precedent: if someone breaks the law doing our bidding, we'll just change the law so that they can't be charged.

Or suppose, as Martineau posited in court, we retroactively absolved Nazis of war crimes and backdated the law to 1940? A little over the top, but that doesn't diminish the main point.

The sponsorship program was not used by Chretien. Get your facts straight before you post. The Gomery report was hired by Paul Martin knowing full well that his leaderships as PM would come to an end. The sponsorship was used by independent people to keep Quebec in Canada. Their were fines to pay and PM Paul Martin was defeated by the Harper government over that. If he hadn't the Quebec people would of been a sovereign country by now which is not good for Canada nor for Quebec.What would there money be? What highways' could they travel on? Being independent. I for one would never want to see that happen. Irene

From Dudley Do-right to Harper's Praetorian Guard, or, perhaps, with his ties to the neo-Nazis of the Northern Foundation, Liebstandarte Stephen Harper...