Stephen Harper and the Great Con War on Pensions and Seniors 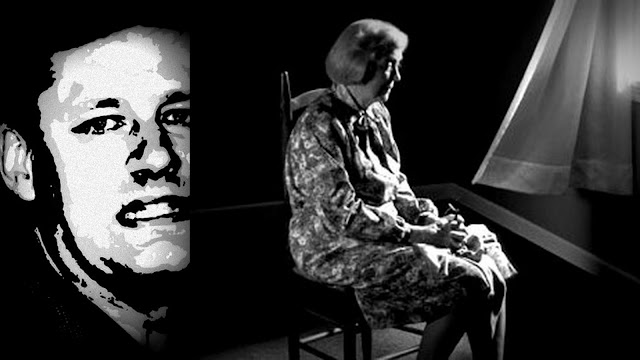 I've written a lot of posts about the Stephen Harper and his Great Con War on Pensions and Seniors for a couple of very simple reasons.

I like old people, I work and care for them all the time. I see far too many of them suffering the indignities of poverty in a country as rich as Canada. I will not remain quiet when so many are suffering in silence.

And of course I loathe and despise foul bullies like Jesus Harper with every bone in my body.

So now I'm writing another post, because as Martin Regg Cohn writes, his latest assault on pensions couldn't be more disgusting and reflexively destructive.

Stephen Harper’s pettiness in trying to sabotage Ontario’s legitimate efforts to create a public pension for middle-income workers sets a new low in gamesmanship. It will only take money out of the pockets of workers, taxpayers and employers who will be forced to pay higher fees because of the federal intransigence.

It as low as only a depraved political pervert like Harper could go.

Harper’s decision this week to stab Ontario in the back — and middle-class Ontarians in the front — may go down as one of the most offensive, retrograde and thoughtless blunders ever committed by a sitting prime minister plotting his re-election on the backs of prospective pensioners.

And Joe Oliver's letter to Ontario was bestial and contemptuous beyond all standards of human decency...

The toxic letter to Ontario penned this week by Harper’s henchman, Joe Oliver — Flaherty’s successor as finance minister, and the MP so cavalierly misrepresenting Toronto’s Eglinton-Lawrence riding — sets a new low for shabby politics and shoddy public policy ahead of an October federal election.

As only a grubby Con and shabby tool of the PMO like Oliver could be.

But what Regg Cohn fails to mention, is the main reason Harper and his morally corrupt Cons are attacking Kathleen Wynne's pension plan like a pack of rabid hyenas.

Not just because they are rigid right-wing ideologues who think pensions are communism, and want to destroy government.

Or because she's a woman, and a lesbian, and a Liberal.

But above all because, as I have pointed out before, Wynne committed the unforgivable sin in their eyes of exposing Stephen Harper's inner monster. 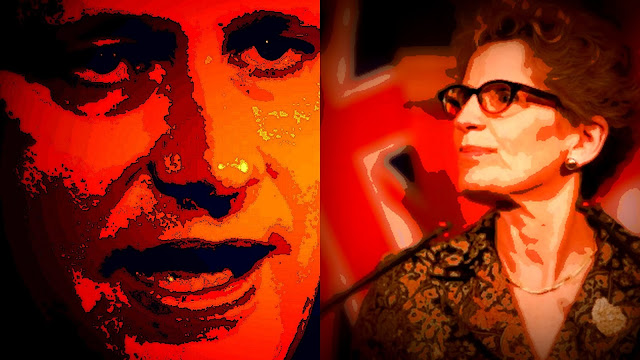 Exposed him as a man who not only doesn't believe in pensions, but one who would smirk at the misery of others... 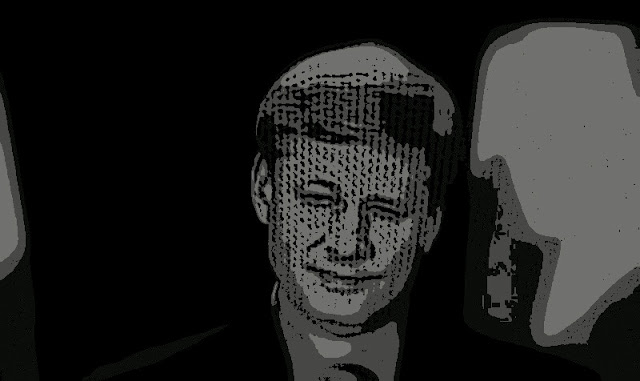 Harper never expected that Wynne would reveal what he told her in that private meeting. He was so inflamed to be in the same room with her that he forgot himself.

And now he is terrified that revelation could make him look bad in the eyes of the many seniors who support him.

Because if he loses even some of them, as you can see from this EKOS chart... 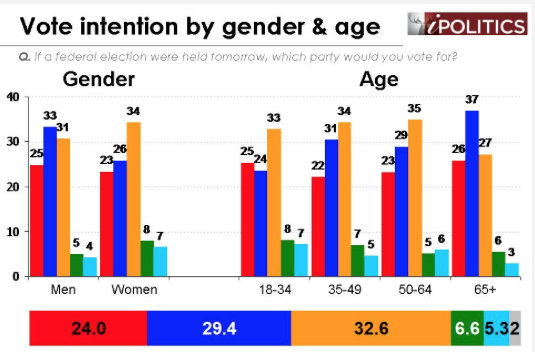 He won't have a snowball's chance in hell of winning the next election.

Which is why I keep urging the progressive parties to help spread the story of what he told Wynne at that fateful meeting.

And make it a centrepiece of their ads aimed at seniors. For nothing could say more about Harper, or better explain why they should not vote for him.

And the ads write themselves... 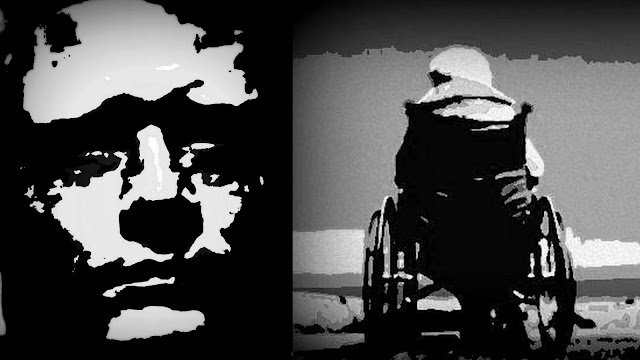 Stephen Harper is a leader who can't be trusted. A leader who doesn't believe in pensions, and and only pretends to care about seniors.

A foul bully who would condemn millions of the most vulnerable Canadians to lives of grinding poverty and humiliation.

A monster who would smirk at the misery of others. And is too cruel and too crazy to govern.

Hit him and his filthy inhuman Cons with that, over and over again, until they scream.

And we will destroy them...

Since Canadians need to save for their own retirement and it's not up to governments to look after people I expect that PMSH will not be accepting his government funded pension when he "retires". Right?

T%he comments were publicized quite a while ago, actually, I read about them at least a couple of months ago, but it's never wrong to re-inform the masses of the dastardly agenda of the ConJobs...of course, as a 'senior' I already know this and would never vote Con....

If you pay close attention to facial expressions Harper does have a nasty habit of smirking just before he says something that really pleases him or he is about to double talk an issue. For some people there is a fleeting change in facial expression when they are about to tell a lie but with Harper its more like an "I gotcha now moment". This was especially evident at the beginning of one of his speeches aimed at promoting far reaching anti terror measures. Not because of the anti terror measures but the same bill gives powers to suppress a complete range of activities that run counter to his oily vision and other objectives.
Rt

Are appearances deceiving? The evidence is mixed. DePaulo and co-author
Wendy Morris, a psychology graduate student at the University of Virginia,
conducted a meta-analysis into the possible predictors of deception for
"Deception Detection in Forensic Contexts" (forthcoming from Cambridge
University Press). They warn readers that detecting deception is an
inexact science, but note an association between lying and increased pupil
size, an indicator of tension and concentration. Second, they find that
people listening to liars think they seem more nervous than truth-tellers,
perhaps because their voices are pitched higher. And liars are more likely
than truth-tellers to press their lips together. On the other hand, they
note, liars don't appear to be more fidgety, nor do they blink more or
have less-relaxed posture. According to DePaulo and Morris, only when
liars are more highly motivated--when the stakes are higher--do they seem
unusually still and make notably less eye contact with listeners.
Also investigating bodily deception cues--particularly facial ones--are
Ekman and his associates, who in 1978 published the Facial Action Coding
System (FACS), which, when combined with voice and speech measures,
reaches detection accuracy rates of up to 90 percent, Ekman claims. He and
his colleagues are now automating the FACS for use in law enforcement.
Meanwhile, they're trying to raise the accuracy rate even higher.

When I heard about deceiving Stephen's "decision" regarding the Ontario pension plan I was appalled. Not unexpected, of course, but still appalled. How does stevie there expect people making just enough to get by to save for their retirement? I'd love to see that explanation. I would suggest another reason deceiving steven doesn't want the Ontario provincial pension plan enacted, because he expects to win the next election and doesn't want "that woman in Ontario" to make him look even worse than he is. If Wynne could actually make the pension plan viable, people will start to wonder why stevie couldn't make one work better on a national level. Good on Wynne for coming up with the idea and wanting to put it into action.

Fewer and fewer workers have employer pensions, cost of living is getting higher and income getting lower. If there isn't an improvement in a national pension plan then we are going to have a lot of very financially uncomfortable pensioners. With climate change, putting us on ice flows is not going to be an option.

hi UU4077...When I last checked harper was worth about five million bucks, so he doesn't need a pension. But you can be sure that he will take it anyway, safely stored in the trunk of his getaway car...

hi mizdarlin...since that story came out, the MSM has to my knowledge hardly mentioned it. And if you remember it it's probably because I keep writing about it over and over again. The reason they dropped the story is because the Cons have denied that Great Leader ever said that. But let's face it, who would people rather believe Kathleen Wynne or Stephen Harper?

hi RT...like a good clinical psychopath Harper can lie effortlessly. But the problem is he has lied so much, that even if he ever accidentally told the truth almost nobody believes him. But yes, he is a desperate psycho so he is capable of anything...

hi David....all of that sounds great. So when can we arrange a lie detector test for Stephen harper and his gang? I think they'd have to replace the needle after every test for it would probably be bent by going so far off the scale... ;)

hi e.a.f....yes it is appalling that Harper and his Cons could dismiss a sensible plan to enhance pensions, that has been endorsed by all kinds of experts, and do so in such a brutish manner. For one reason or other the fact is many Canadians don't save enough money for their retirement and if nothing is done it will cause mass misery. And remember Wynne first tried to get a national plan going, but the Harperites and a couple of Con premiers shot that down too. They really are blind and they really are beasts...

Pensions are only for Conservative MPs (possibly just cabinet MPs) as far as Harper is concerned. They deserve pensions! Nobody else does.
I don't understand why this level of hypocrisy is not being talked about more, especially after his sabotage work in Ontario.

hi Noah...I don't understand either why the MSM isn't exposing the Cons as hypocrites, especially since half their caucus ran squealing out of the door to make sure they don't have to wait until they're 65 to collect their juicy pensions. But there is still plenty of time to remind Canadians about that, and if the MSM doesn't do it we will...