Stephen Harper and the Final Battle for Canada 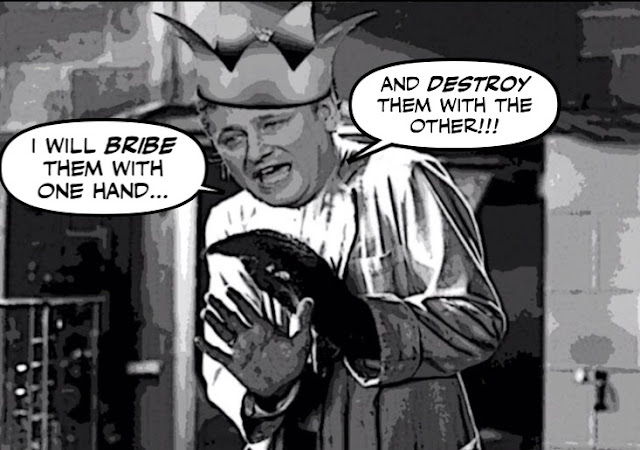 For ten long years he has schemed and plotted to destroy the Canada he hates so much, by perverting our traditions, and dismembering our democracy.

And now he's got a new plan that he hopes will do both.

Force a long and exhausting election campaign upon Canadians, so he can bombard them with ads from his well funded propaganda machine, while draining the money like blood out of the opposition.

So he can claw them to death in the final stages of the campaign.

And it seems that the Final Battle for Canada is about to begin.

Prime Minister Stephen Harper will call an election as early as this Sunday, kicking off what would be the longest federal election campaign in modern history, CBC News has confirmed.

For not content with violating our democratic traditions again, or lying and cheating, and trying to steal the last election, he has also diddled the Election Act to give himself maximum economic advantage.

Until last year, the spending limits were set no matter the length of a campaign, the minimum amount of time for which is 37 days (with voting day falling on the 37th day). But the Conservatives' Fair Elections Act provided for the parties' $25-million limits to be increased if the campaign is longer than 37 days: for each additional day the limit is increased by 1/37th, or an extra $675,000.

Even if that means screwing the taxpayers he's always claiming to defend.

It's not just political parties that will be spending money hand over fist if Stephen Harper fires the starting gun for the Oct. 19 federal election weeks earlier than necessary. Taxpayers will be shelling out big bucks, too — millions in extra administrative costs and tens of millions more in rebates to parties and candidates for their inflated election expenses.

And wasting millions and millions of dollars for crass political purposes, even as the country slides into recession.

It defies belief. It couldn't be more outrageous, or more disgusting.

And the man couldn't be more of a monster or a maniac... 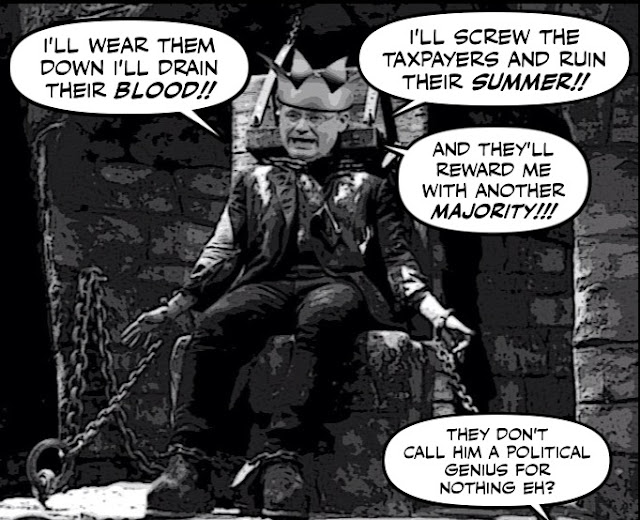 But if our mad tyrant thinks this latest sleazy move will help him win the election, I think he's in for an unpleasant surprise.

For starters I don't think Canadians will appreciate having Harper screw with their summer, when it's so short, and this early election call is so unnecessary.

And they definitely will not appreciate being bombarded with even more ghastly ads like this one... 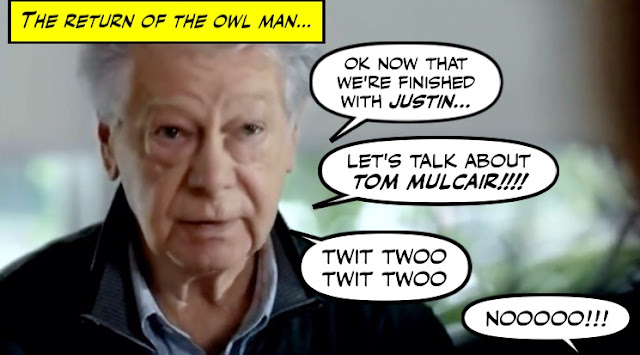 They will resent that even more than they already do, and hold it against him.

Secondly, the early call will force him to campaign in the glare of this scandal.

The campaign's timing could also mean Harper will be more available than usual to reporters and members of the public at the same time that his former chief of staff, Nigel Wright, takes the stand at the trial of Mike Duffy on Aug. 12.

And answer questions or run for cover... 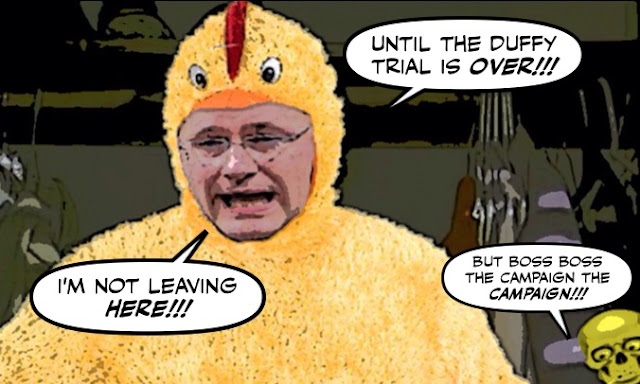 And either way it will do him great damage.

Thirdly, as I have mentioned before, our greater presence on social media will help counter his financial advantage and level the playing field... 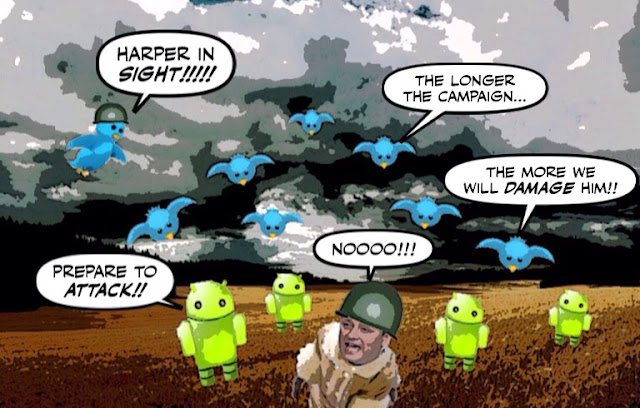 And lastly, but most importantly, the main reason Stephen Harper's sleazy plan to extend the campaign won't work, is because the winds of change are blowing so strongly.

Two out of three (66 per cent) of those polled agree it is “time for change,” while only 24 per say it is “not time for change” and 10 per cent remain unsure.

Canadians want change, and Harper's scummy move will only make them want it even more.

As for me, although I was hoping for a little more summer to rest up and prepare for the battle ahead, and I'll be in the heart of the Scottish highlands when the election call comes.... 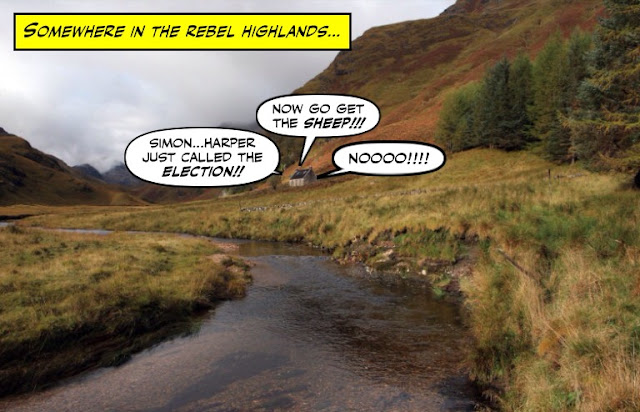 But don't worry, I'm taking my computer with me, we do have peat powered wifi.

And I couldn't be more ready.

I've waited so long for the Final Battle for Canada to begin.

So we can finally topple the tyrant... 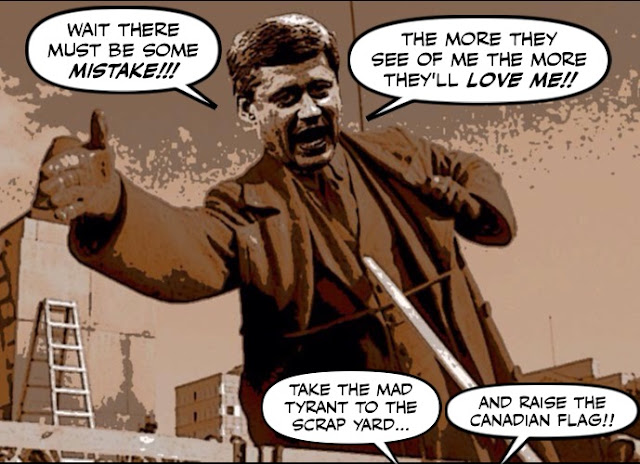 And take our country back.

For a what a glorious day that will be, when the long nightmare is finally over and we are free at last.

When we are celebrating in the streets from coast to coast to coast. When the church bells are ringing. And the fireworks are exploding over my head.

Like they did the other night at the end of the Pan Am Games...

The Final Battle for Canada is beginning.

It is funny, there was a time when we figured a long campaign would be a disadvantage to Cons because during a campaign their racism, fascism, and general stupidity would come out as time went by. The corrected this by simply not engaging in real debate and not talking to the media or answering unvetted questions. And the media, of course, has been deeply complicit in this process. If only the MSM would refuse to cover Harper until he answers questions openly.

Unfortunately, Harper and the Cons will still be here when you get back to Toronto, so please rest up and prepare for battle!

All the best,
Wendy (in Cobourg, a beautiful little town but most here are CONNED)

Why would the msm, which is conveniently owned by christofascist right wing corporations who are all on the side of heil harper turning Canada even more into a corporatocracy/theocracy than it already is, ever go against their masters and bite the hands that feed them their bloated, undeserved salaries along with all the extra lobbying perks that are handed out in the backroom deals as an extra bone for those mangy dogs? Hmmmmm?

Hi Simon! So glad you're taking your computer to Scotland. We need you more than ever now that the final battle is about to begin. Simon, is it okay for me to post some of your pics on my wall if one should be needed to emphasize something I want to say. I would, of course, give you credit for it.

Well, it'll probably come this week or next.

This article is a bit right leaning, which is interesting and different from the CBC, but I think it does a fair analysis of the financial strength of the Conservatives compared to the other parties. Tom Flannagan is correct, when he says that the Conservatives have a better, much better ground game than the left.

Now normally, this is where the left would accuse me of saying the left can't win, which isn't what I'm saying. The left can certainly win, but it will be a very difficult test indeed.

The anti-Trudeau adds seem to have worked, in that many Canadians have begun parroting the line that he's just not ready. I think that's probably a little unfair, but then, I'd cringe if he was running the country. He's not very articulate, and he isn't a very deep thinker. That doesn't make Harper deep, just deeper by comparison.

Can the Conservatives come up with a similar tag-line to throw at Mulcair? I guess we'll find out very soon indeed. At least he's more apt to be taken seriously than Trudeau.

So what if it costs taxpayers millions more, if Harper thinks it will give him the advantage he'll say up yours to all of us. If he's dumb enough to call the election this weekend and submit us to over 2 months of constant, pathetic attack ads that appeals only to his slack jawed yokels base, then so be it. He will be soundly defeated.
Stephen Harper, he never was ready.
JD

hi Kirby....I don't think Harper will get away with not answering questions during an election campaign as he does the rest of the time. And if he tries to dodge any of the Duffy trial questions he could look guilty. But yes, the MSM let him get away with murder for so long, and slowly but surely it became the new normal. But not for much longer I hope...

hi Wendy....You mean you're not going to impeach him while I'm away and give me a pleasant surprise when I come back. I'm very disappointed. ;)
But yes, Scotland and its long history of resistance moves me in ways I can't explain. So I will be ready to take him on the moment I get back...

hi anon....yes I'm lugging my laptop to Scotland and I will be writing at least a few posts when I am there. And yes you can help yourself to any pics you want. As I said in my post, I've waited a long time for this battle to begin, and we should all hit him and his grubby Cons with everything we've got....

hi anon...yes the Cons do have a good ground game, and of course more money. But the opposition has the force of change to propel it, and an anger that sometimes frightens even me. Once upon a time the comment pages in the papers were almost even;y split between those who supported him and those who didn't. But now most of the comments are negative, and that cannot be a good sign. But you're right it will probably be a very hard battle, and for the divided left it will not be easy...

hi JD...yes I know Harper is now so desperate he couldn't care less this early call will cost tax payers. But I think it can be used by the opposition to attack him. The latest Con line is that they're extending the campaign because it's good for democracy. Which of course couldn't be more hilarious....

If the majority of Canadians are really fed up with the Government, then they better get out and VOTE!