The Heroic Vote of the Long Suffering Greek People 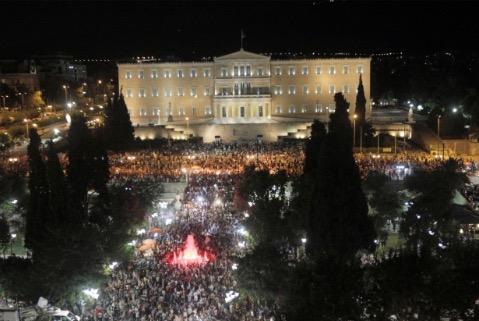 For years they have had to endure the pain of austerity. Look on helplessly as their jobs disappeared, and their pensions shrank.

But still the cruel and greedy banksters wanted to impose even more austerity upon them. And humiliate them further for daring to elect a left-wing government.

But today the Greek people finally rose up and said enough is enough.

In a referendum seen as the single biggest experiment in people power since the debt-stricken country crashed on the rocks of bankruptcy, 61% of voters rejected the terms of further financial assistance set by creditors at the European Union and International Monetary Fund. Lobbed at the heart of Europe with the force of a rocket launcher, the rejection was a cry of rage.

“Oxi, oxi, oxi [No, no, no] that was what we had to say,” said Roula Apostolou, a student, who had rushed to the headquarters of prime minister Alexis Tsipras’s radical leftwing Syriza party. “What you have heard is the voice of the people, the rage of the gods.”

The rage of the gods. The greedy banksters in shock. What a wonderful moment it was... 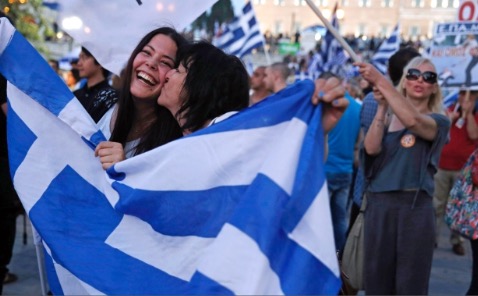 And what made it even more wonderful for me was that it was young people who helped lead the way to victory... 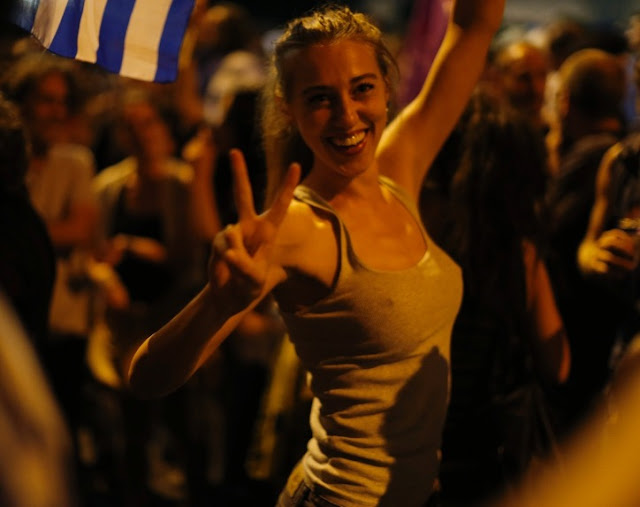 Young Greeks in particular, who have been especially hard-hit by policies that have deprived them of hope, are thought to have played a seminal role in the outcome. Joblessness among under 25s is above 55%.

Just like they are doing in Spain with the Podemos movement, that now controls six of that country's biggest cities... 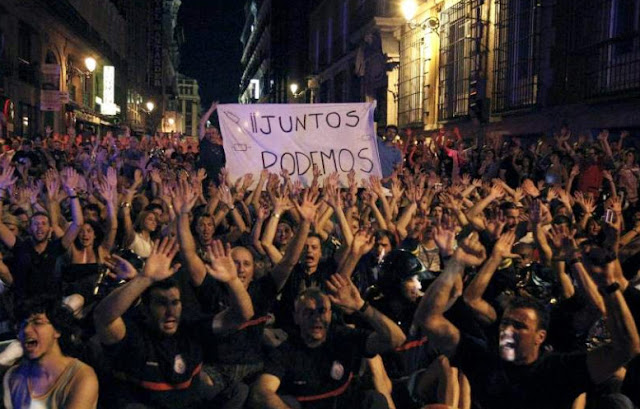 And just like they are are doing in other countries like Scotland, where they have helped the anti-austerity Scottish National Party take total control of that country. 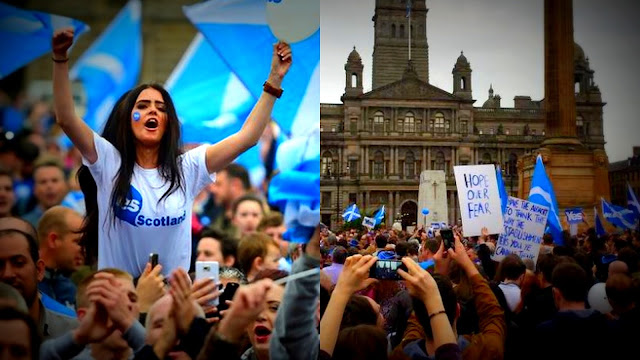 And what I hope is that they will help inspire young people in this broken country to rise up against the Harper regime that would condemn them to misery and despair.

And help liberate our Canada.

From the song Liberation by Martyn Bennett, who was born in St John's, Newfoundland, and died of cancer in Edinburgh at the age of thirty three.

"The voice of rejoicing and salvation is in the tabernacle of the righteous...it is marvellous in our eyes...

It's a liberation song tinged with sadness, as it should be. For Martyn who was an amazing artist died so young, and the road ahead for the Greek people will be a hard one.

But they rose up and chose struggle and hope, over fear, never-ending misery and despair.

As we will rise up against the Con regime, so that we too can say:

The voice of rejoicing and salvation is in the tabernacle of the righteous.

And it is marvellous in our eyes...

Isn't the current economic problems of the Greeks because there are not stable governments in Greece (too many political parties) coupled with decades of inaction by governments where the rich don't pay much tax, if at all.Tax shelters, etc. Let that be a lesson to us.

We live in a world of capitalism for the masses, socialism for the bankers.
The EU, IMF and the rest of these fraudsters who are looking for their pound of flesh from the Greeks should take heed of the first capitalist motto: buyer beware. We hear about the German lenders that are being taken by 'lazy, do nothing' Greeks.
We'll, time for them all to be cut lose and bear tell consequences.

hi anon....yes this is a story of greed, the banks got most of the bailout money, and still they wanted even more flesh from those suffering the most. The poor, the elderly, and the sick. There was no need to be so harsh, you can't squeeze blood out of a stone, and that kind of savage capitalism can only spawn a revolution, or fascism.
This mass austerity for the poor while the rich get richer and richer can't last much longer....

The present leader has commissioned a report into that debt. Among many reasons is excessive and unjustified military spending at NATO and the US bequest and the propping up of private banks and extremely high interest rates. While high public expenditures was blamed Greece's public expenditures were lower than the rest of the RU. What a put up job it all was.

The difference between the Greeks and the US after Bush is slim..and unlike the US, the Greeks were strong in the face of rightwing threats..
I hope against hope that Greece will hang tough, and show the greedmongers and banksters what humanity is really all about..and yes, the young people everywhere seem finally to have woken up and turned activist, from Quebec and Alberta to Scotland and now Greece..and hurray for them!
Let's hope that these 'new republics' hang together and offer each other hope and assistance whenever possible...

The Mound really puts the whole horror show into perspective. Its the neo cons again.
I did some trojan horsing around.