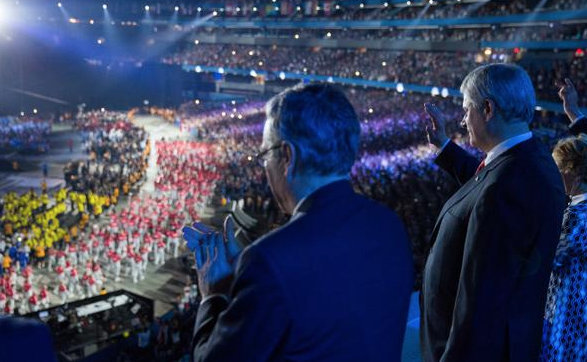 Well there was Stephen Harper last night, at the opening ceremony of the Pan Am Games with his hapless stooge Joe Oliver at his side.

Both of them trying to look like they were having a good time.

But not quite pulling it off, and with good reason.

For it was yet another day when they had nothing to celebrate.

Just another day of job losses

The Canadian economy lost 6,400 jobs in June as gains in full-time work were offset by losses of part-time jobs, Statistics Canada says. The jobless rate stayed steady at 6.8 per cent, the same level it has been at since February. the data agency reported Friday.

Just more evidence that we may be heading for a recession if we're not in one already.

Official data has shown Canada's economy has contracted every single month this year. Many economists define an official recession as two consecutive quarters of declining growth, and by that yardstick, Canada's economy is officially two-thirds of the way towards recession.

And when even Bloomberg doesn't believe Harper and Oliver's sunny forecasts, or believe that they still have a surplus, you know the Cons are in trouble.

The Conservatives have touted strong economic management as one of their main assets and balancing the budget would meet a signature promise to end seven years of deficits. However the Finance Department said in its April budget documents that a 1 percentage point cut in economic growth over a year would reduce the budget balance by C$4.1 billion.

Which helps explain their new desperate mantra: Because the economy is so fragile it would be too risky to let the opposition parties govern... 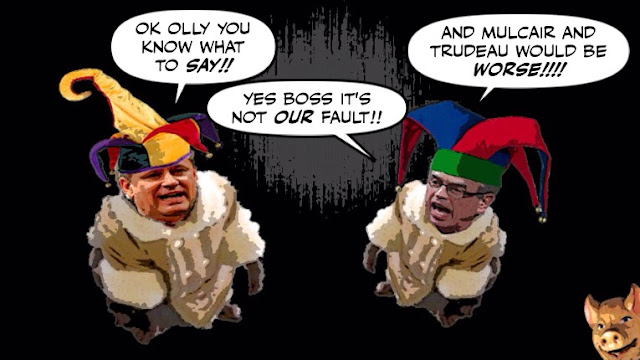 “Now is not the time for risky, high-tax schemes that will stall growth and undermine our financial stability with deficit spending,” Oliver said in a statement Thursday.

When in fact, Great Economist Buffoon Leader has kept us in a deficit situation ever since he came to power. He's almost certainly heading for another one.

And nothing, but nothing, could be as risky as letting him and his insane Con clown posse remain in office.

I mean just look at them. Have you ever seen such a shabby gang, or such criminal incompetence? 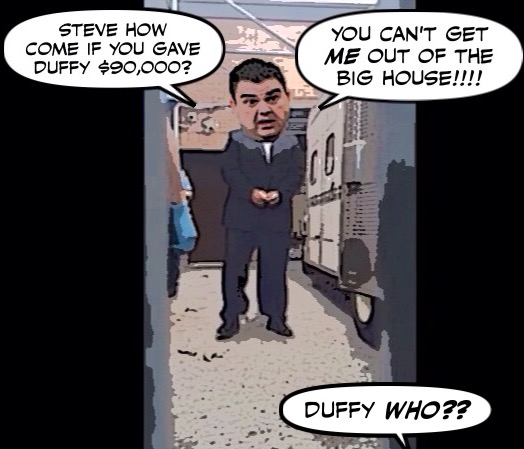 Leona Aglukkaq choosing to go boating instead of attending a climate summit. 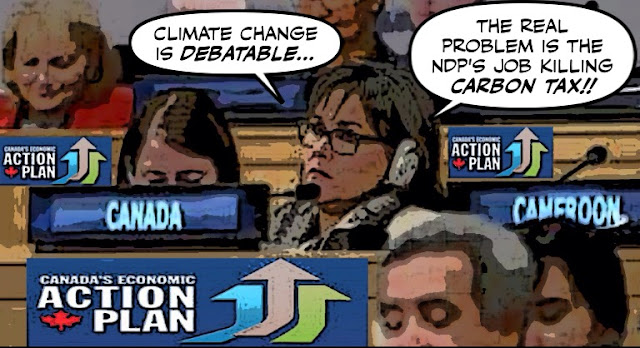 Joe Oliver apparently unable to determine the difference between a surplus and a deficit. 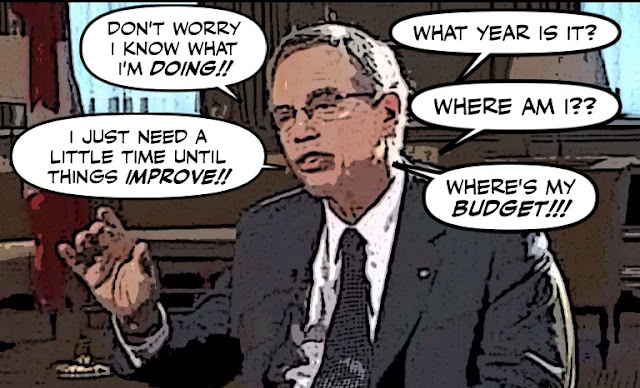 And Pierre Poilievre tweeting this about yesterday's dismal job losses...

Before deleting it two hours later. After apparently confusing the official Stats Canada site with this satirical one.

And he's the EMPLOYMENT Minister? 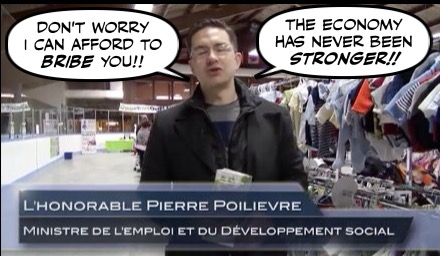 And of course what can you say about Stephen Harper who would shout "strong, proud, FREE !!!!"

While turning us into a police state.... 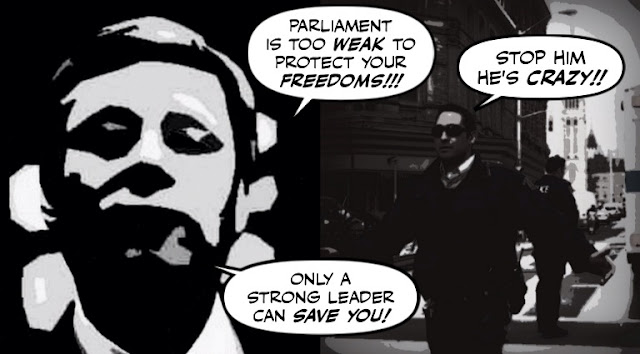 I mean is that not risky, or scary, or what?

Is it just criminal incompetence, or is it insanity? Will the election even though it's now less than 100 days away come too late to save us?

And the good news? The Cons are coming apart at the seams.

It is all going horribly wrong.

Soon NOBODY will believe that they know what they are doing... 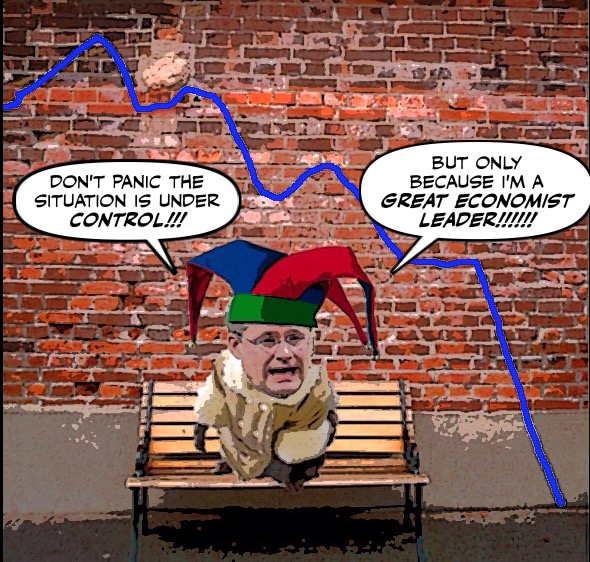 The writing is on the wall.

And they're all going down.

Now doesn't that make the weekend seem even better?

Simon, when talking about the economy Harper and his side kick Oliver are out and out right lying. This is how desperate they've become. They don't even spew propaganda they just simply Lie and not just about the economy, actually they lie about everything. Shabby is a good word to describe them. Here's a few more. Uncouth, inept,,cowardly,amateur,dishonest,, embarassing, mindless,malevolent, They do not have one redeeming feature and they are all buffoons. Enjoy the weekend.

I would buy that the economy hasn't turned a corner, whether or not the government says it is irrelevant to me. I would agree that whatever growth we've seen is mostly smoke and mirrors; what new manufacturing, or resource extraction projects have you seen? Me? I dunno, not much on that front really.

That said, how is the left going to turn things around? The government doesn't control the economy. If it did, Greece would post triple digit growth tomorrow. So how is a leftist government going to fix things?

Probably by being more open and transparent, and seeking the advice of experts in their fields...?
Cult of , ahem, personality does not seem to be cutting it.

Obviously you forgot the saying "don't put your eggs in one basket"? The Harper Government (that's what he prefers to call Canada) put their's in the petroleum basket...consequently heading Canada into becoming a a basket case.

I really think it is a tad rich with the ad against Trudeau saying budgets will balance themselves.This from dear leader who has never balanced a budget in what might be his entire life?.Took dear leader two years to blow the surplus left by the Liberals and huge deficits ever since with a historically high one of over fifty billion dollars.Not much of a balanced budget that year.

Do you notice Great Economist Leader has a similar wave to Kim Jong Un? 8-)

Ah yes the economy. In my opinion Steve and his Cons haven't done a great job of it. Lets see how many plants have closed while he has been in office?
were any really decent jobs added to the labour market? You know the type? ones with a living wage, 40 hr weeks, some benefits and a couple of weeks paid vacation every yr. ya didn't think he had.

All Steve has managed to do is export Canadian jobs to every two bit dictatorship he could and signed a 31 year trade deal with Communist China while wanting to build a monument to the victims of communism. Even stacked a committee to get it passed. Like we couldn't have used the money to aid First Nations children who were the victims of Steve and his cons?

hi Pamela...yes it's hard to believe, but we do have a government that blatantly lies about EVERYTHING.
And yes, uncouth, inept,,cowardly, amateur, dishonest,, embarassing, mindless, malevolent, are just some of the words that come to mind. And of course, won't it be wonderful when this nightmare is finally over? I'll be taking a break soon, in Scotland. But I shall consult the ferocious spirits of my ancestors, and I'll be ready when the time comes.... ;)

hi anon...1:17...A couple of things a leftist government can do is try to achieve a more balanced economy, and draw up an industrial strategy that will prepare us for the greener economy of the future.
And whatever they do, they can't do worse than the rigid ideologues of the Harper regime...

hi anon 8:17...yes, putting our eggs into one oily basket, and allowing the Dutch Disease to ravage our manufacturing sector, was the Con regime's worst mistake. They should have done something to mitigate the damage, but they just didn't care a damn....

hi Steve...yes Harper's approach has been outdated and too rigidly ideological. How anyone could reduce us to our former status as hewers of wood and drawers of water, or in this case oil, and call that a success is simply beyond belief...

hi hinofan...yes that wouldn't hurt either. Taking the advice of experts instead of posing as a Great Economist Leader with an MA degree he never used in a real job, could have saved us a lot of grief. But what do you expect when even Big Oil is calling for a carbon tax, and for crass political purposes he is still against it? After a while stubborn incompetence starts to resemble insanity....

hi anon...well of course that was just another grotesque distortion of the truth. Trudeau was right. With the size of the deficit we had, if the economy had been properly managed it would have taken care of the deficit, and the Harperites could have created jobs instead of killing so many...

Simon, et al. That doesn't provide a satisfying answer to the question. We have, "We don't like Harper, therefore, anything is better."

Once again, the government doesn't control the economy, and provincial governments in this regard matter more than Ottawa. Ontario has driven many manufacturing jobs out of the country with very expensive electricity, and a variety of socialist feel-good schemes of late. Where's the balance for Ontario? And Quebec is leading Ontario in that regard by about a decade. Our two most populated provinces are rapidly becomming financial basket cases, through no fault whatsoever of the federal government. With Alberta swinging hard-left, what little productive industry is left is very likely to take a hit.

What exactly is Ottawa supposed to do about that? That's democracy for you!

To his credit, Harper has done what he can to return towards a balanced economy - what do you think income-splitting is *actually* about? It probably won't work, but it's better than anything presently on offer by the other side.