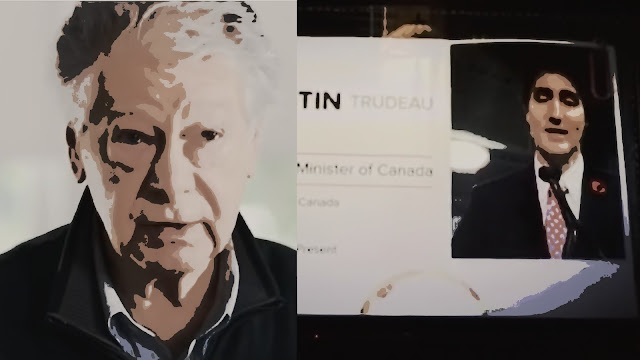 There's a new Con attack ad out there aimed at Justin Trudeau. I'd heard about it but last night I saw it for the first time, and it couldn't be more disgusting.

But also because it's so stealthy.

A popular Conservative canard — that the Liberals would end income splitting for pensioners — seems to have made its way onto a number of Canadians’ TV screens in the last few weeks.

Anecdotally, and as reported by others, a Conservative ad making that claim has been seen on BNN, CTV, and Sportsnet 360.

Oddly, however, it can’t be found online.

And the reason the Cons don't want you to be able to look it up, is because the ad is nothing less than fraudulent.

It features this older actor, who I'm sure you recognize, lying through his teeth... 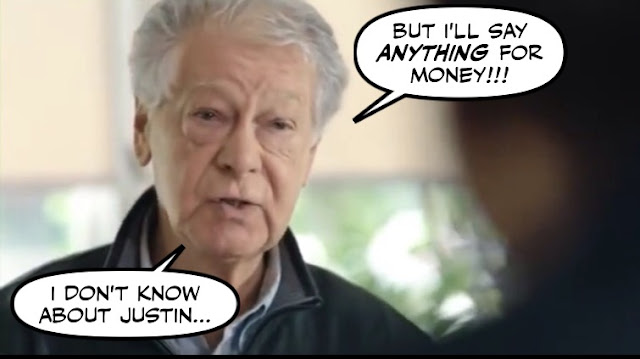 “He’s (Justin Trudeau) against income splitting for families, but without pension splitting — my wife and I would be in a bit of trouble,” he says, implying Trudeau has made some sort of commitment to do that.

It claims that Trudeau would scrap income splitting for pensioners, when he has made it clear he wouldn't.

“Let’s get this on the record once and for all: as much as the Conservatives might wish they had the power to control every piece of policy that comes out of Ottawa, they won’t be writing the Liberal party’s platform. We will not end pension income splitting for seniors.”

And as I have pointed out before, that Con claim is nothing but BALONEY.

There is no truth to the Conservative assertion that the NDP and Liberals would scrap pension income splitting should they form government. Both parties have explicitly said they would keep the measure.

For these reasons, the claim that opposition parties would do away with pension income splitting is “full of baloney.”

But since it will scare seniors if it's not challenged... 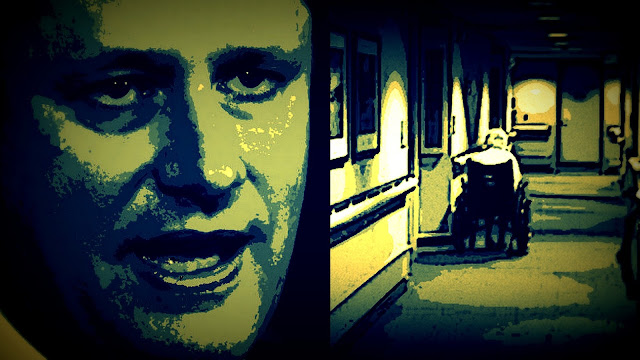 May I suggest two ways the Liberals and the NDP, and any other decent people can do that:

(1) Report it to the Advertising Standards Council and force the Cons to pull it off the air, as they once had to do with this ad.

A Harper government advertisement touting a jobs program that does not yet exist has been pulled from the airwaves and won’t be seen again, Global News has learned.

The ad I once mocked with this video...

And here's how to submit a complaint.

(2) Launch a devastating series of attack ads, that expose the Cons as liars who would terrorize seniors for crass political purposes.

Blanket the airwaves with them, like progressives have never done before.

For if that ad can be properly exposed and discredited, it will blow the Con attack machine out of the water. Make Canadians doubt anything else they say.

And expose this Con hog as the ghastly liar he is and always has been... 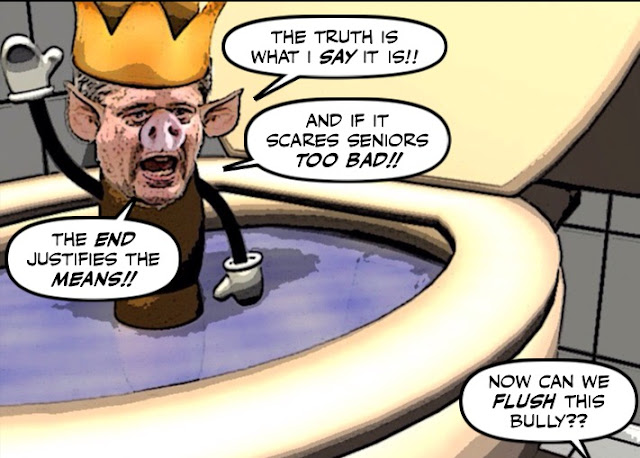 As a man too morally depraved and too cowardly to be allowed to remain in office.

Do it, do it now. I believe the Cons are so desperate they've made a fatal mistake.

We will never get a better opportunity to attack their Death Machine.

And if we destroy it, we will destroy them...

The Libs and the NDP have to fight fire with fire. There is nothing wrong with attack ads that attack and refute the fraudulent information found in Con attack ads. Don't attack the man (Harper), attack his foul and anti-democratic policies by refuting them with the truth! If the Libs and NDP don't start airing attack ads soon (like by the end of July-August) then the relentless Con attack ads airing on television NOW will have succeeded in what they have done before--define/smear the opposition leaders before they have had a chance to define themselves and present their own policies. "Bible-believer" Stevie should dust off his Bible (if he has one) and read what it says in Exodus 20:16 "You shall not bear false witness against your neighbor."

another thing people can do is write letters to the editor clarifying matters. Most small local papers will print these types of letters. I have written my local paper regarding the first attack ad on Trudeau, about his not being ready. it got printed this past Tuesday. My points were it was a good thing the cons determined he wasn't ready, given being ready in con terms was that you had to make patronage appointments to candidates who went on to defraud the government, have sex with teenage girls, etc.

I really truly believe that if the cons think Trudeau isn't ready, thank god because their leader, if he is ready, has so many crooks in his party, then who would want to be ready. when your party, the cons, have more people on trail, awaiting trial, in jail, about to go to jail, than a Hells Angel's chapter, well obviously Trudeau is the better candidate than Harper. that includes Mulcair, May, and Doucette being better candidates and more ready to be P.M. than harper. We don't really have to attack harper and his cons, just remind voters of harper and his cons "record" and in this case its their criminal record.

Writing letters to the editor of your local paper and talking to neighbours is a great way to inform people of the cons record. By speaking to a Veteran, and informing them of the cons record regarding Veterans, you can get them to look at another party.

David makes a very good point, regarding Exodus 20:16, "you shall not bear false witness against your neighbour". Of course Steve is one of those religions which believes the bible is "inerrant", so that does help. If the bible says, no false witnessing, its got to be true. His religion also believes, "the second coming is imminent". I don't know exactly what that "second coming" is but I've got a feeling its not about our sex lives.

Steve and his approx. 60 fellow travellers of the Christian and missionary alliance church seem to have missed the mark on a lot of things starting with the 10 commandments. Like did James Moore really want to spend more time with his family, or was he violating that commandment about "thou shalt not commit adultery". We know Vic toews couldn't keep it in his pants.

Lets see, there is "thou shalt not kill", but hey there is steve bombing the hell out of people who have yet to invade us. Not to mention when you do not provide adequate housing, food, medical services to people you are killing them.

The list could go on, but it would be a waste of ink. In my opinion there is nothing these cons will not do to win the upcoming election. We have only to look at the record of their actions in the past elections.

hi David....I realize the progressive parties have said they don't want to use attack ads, And I can understand some of their reasons. But lying like thieves to scare seniors for crass political purposes is really beyond the pale. I thought the ISIS ad was as low as they could go, but it seems they always find some way to plunge even lower. And because of the way they are trying to hide this ad, the Cons know it.
And if the progressive parties fail to take advantage of this opportunity to discredit the Con propaganda machine, they could live to regret it forever....

hi David...yes, with all the new information they can now gather thanks to their Bill C-51, they are probably dreaming of smearing us all, or at least anyone who dares defy them. Thank goodness all I have on my record is one speeding ticket or I might be worried... ;)

hi e.a.f....it's very important that we reassure seniors and let them know that Harper is lying. For quite a few of them have abandoned him, and that disgraceful ad could scare some of them back into his hands. Never was it so true that the truth will set us free...

I saw it Friday on MLB.com of all places. It was in banner-style at the top of the page running in some sort of repeat mode. It pissed me off to see it there. I like to go MLB.com to, you know, check scores, the standings, etc., not to be bombarded by the Harper Inc propaganda machine.

Like that scary Jesus guy feeding the multitude, as well as providing healthcare with no fee up front...

hi Omar...I've only seen it once. But then I don't watch much TV and once was enough. The whole ad was disgusting, and when that old actor looks into the camera and says : "I wish Justin Trudeau knew what it was like to live on a fixed income." I practically barfed. The Cons really are the scum of the earth...

Here's my issue: most Canadians don't realize that Stephen Harper is waging a media war.
He uses Canadian taxpayer dollars to buoy his buddies with the media companies, his buddies with the media companies keep him afloat by endorsing their sad, broken and inept platform and the cycle continues.
What's important here is that when they spend dump truck loads of Canadian cash on ads, they wind up getting 'concessions' for their own party advertising. If I'm wrong, show me the invoices and prove that they're paying the going market rate for ads.
Ooops ... no? The result? Endless attack ads at a severe discount to what the competition is paying.
Also, don't forget that this happens with the conglomerates that control print, direct mail, radio, billboards and other media formats IN ADDITION to TV ads, so the other parties don't stand a chance.
Ultimately, this explains so much of Stephen Harper's platform because the people that continue to flock to traditional media have 'traditional' values: they want low taxes, fear people of colour and different religion and want more police and scrutiny, not less.
Welcome to Stephen Harper's Media War on Canada.