Stephen Harper and the Creeping Militarization of Canada 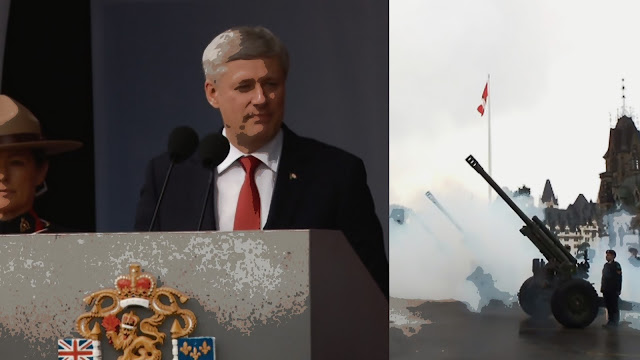 In my last post I showed you yet another example of how Stephen Harper is trying to militarize our culture.

By having such gentle and iconic Canadian traditions like the RCMP Musical Ride, compete in the same arena with a sinister SWAT show... 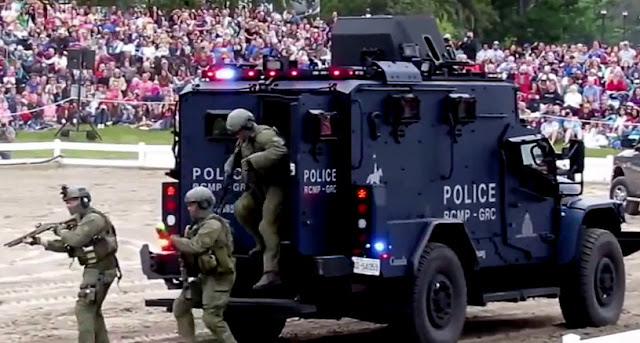 Complete with armoured cars, explosions, and even a prisoner to carry off in handcuffs.

And yesterday's Canada Day show on Parliament Hill was more of the same. With more soldiers and police officers than you could count. A twenty-one gun salute.

And this thundering message from Great Warrior Leader.

“As we saw right here in our Parliament, this threat is everywhere today,” said Harper, who took in the festivities with his wife Laureen and two children. “But we have faced great threats many times before, and we have overcome them. And we shall overcome them once more. So, let’s hear it for the brave men and women of the Canadian Armed Forces.”

Be very, very afraid, the terrorists are everywhere. And only I and MY police and MY army can save you. 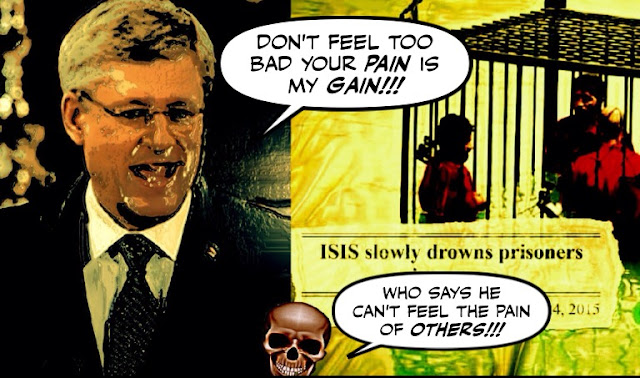 And of course keep us strong, proud, and FREE!!!

The slogan that flashes almost subliminally at the end of every Porky Economic Action Plan. And is in all his speeches, and all over his sicko propaganda.

And what I find even more disturbing is that all this militaristic brainwashing seems to be seeping like poison into the population.

For when this couple was interviewed by the CBC yesterday and asked what Canada Day meant to them... 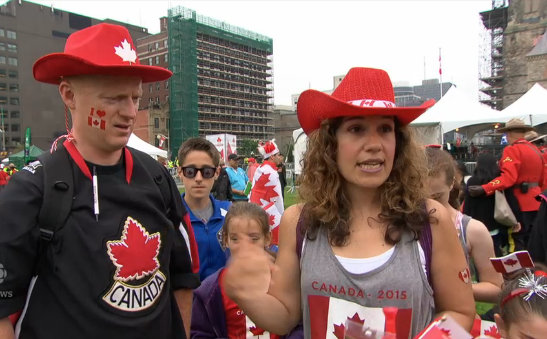 This is what they said:

It means we are free and proud and Canadian and that we are not afraid.

Which made me wonder where is this word FREE coming from?

Since when do children in this country wear it on their t-shirts? 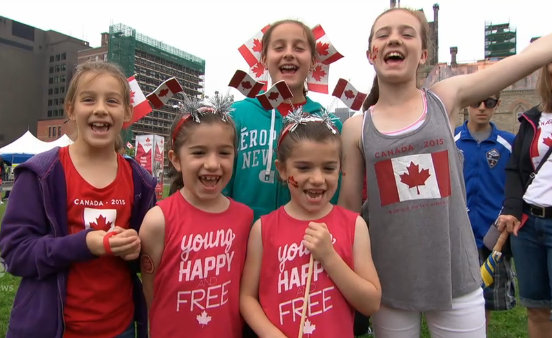 To conform with the sayings of Great Leader...

And how dare Stephen Harper use that word ? When he is trying to turn us into a police state, terrorize us into voting for him.

And that insane disconnect is only making him sound even more like a maniac. 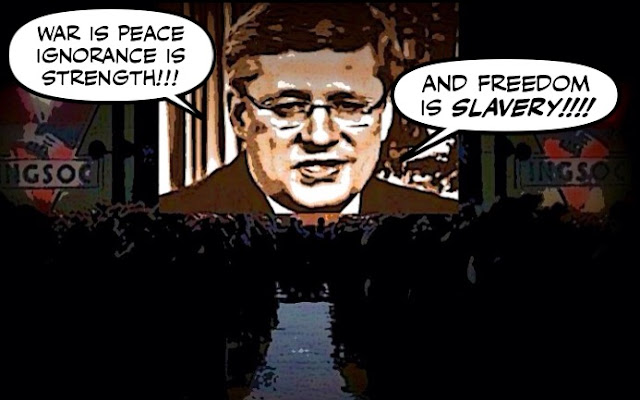 “Doublethink means the power of holding two contradictory beliefs in one’s mind simultaneously, and accepting both of them.”

So it is scary stuff.

But the good news is that Stephen Harper is now living in his own twisted fantasy world. And as Andrew Coyne points out, he couldn't be more isolated.

The Conservative Party in its current incarnation was in many ways Harper’s creation. The government he leads exists more or less as an extension of his index finger. But recent months have left the impression of a prime minister who is increasingly isolated, cut off not only from the public he rarely sees and the media he will not talk to, but from his own party.

The undying loyalists, the ones whose careers he promoted on just this basis — the Pierre Poilievres, the Chris Alexanders — will stick with him to the end. But that is pretty much all that remains, a dwindling palace guard of zealous staffers and the callower ministers. “The Harper government” used to be a branding exercise. It is now an almost literal description. 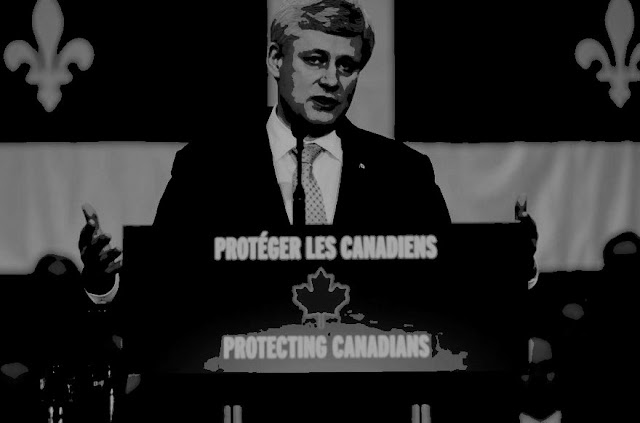 The leader on whom the Tories are betting their campaign has an approval rating, according to the EKOS polling firm, of just 32 per cent, versus a disapproval rating of 62 per cent. This is by far the worst of any party leader.

His government is falling apart like a decomposing corpse, he's going nowhere, and neither is his party.

Averaging the polls together, the ThreeHundredEight.com poll-tracking website shows the Tories sliding steadily all through the last two months, from a pallid 32 per cent at the beginning of May to a dismal 29 per cent at the end of June.

Worse, only about five to seven per cent of non-Conservative voters would consider them as their second choice. 60 per cent of voters tell EKOS the government is moving in the wrong direction, versus just 32 per cent for the contrary.

Which is great, except for one thing. That desperation, coupled with that isolation from reality, can only make him even more dangerous.

Which is why I keep urging progressives to unite in the face of that growing threat. For Coyne says he is looking tired, but I think he is looking crazy, or crazier.

And I haven't the slightest doubt that if he is not stopped he will find any excuse to subvert the election.

And he will turn us into a police state... 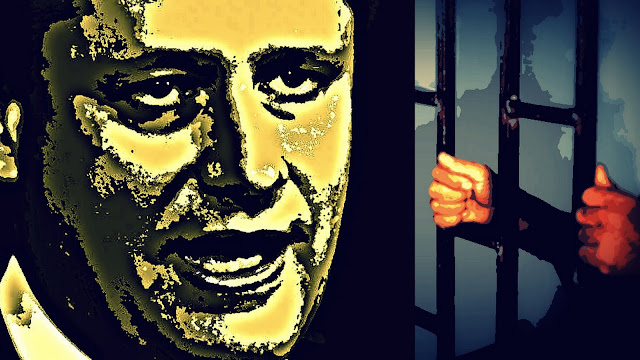 The U.N. needs to oversee the ballot counting. Otherwise heil harper will steal ANOTHER election.

Thought I read there weren't nearly as many people as expected on parliament hill yesterday. Is that right?

“Terrorism is the best political weapon for nothing drives people harder than a fear of sudden death.” Adolf Hitler

Adolf Hitler never said that. The quote is based on two invented remarks from Hermann Rauschning's mendacious book, The Voice of Destruction.

Did you hear the CBC As It Happens interview John Crosbie yesterday (2015-06-01)? I wonder how many other older former PC voters across Canada heard the interview?

He was not happy that his son was not approved by the Cons in Ottawa as a candidate. He politely used the phase "browned off". I am beginning to think the Cons (well Harper and the PMO) have a death-wish. Other Cons probably are just crying.

The reason Crosby's son didn't make it was Crosby is a Progressive Conservative not a Reformer. Only those who swear allegiance to the prince of pork will be able to run under the Con banner. Crosby ought to be happy his son was not accepted by the Cons.

Guess Mr. Crosbie did not hear the famous comment made by Nigel Wright to the Vancouver Sun in 2000. "Our aim is to drive a stake through the heart of the Tory party". It took them a while but now all that's left is to undo the damage that the Torys and Liberals did over the past 75 years.

Strong, Proud,Free in Harper speak. Strong in our biased views and strongly fearful of those that are different, Proud to be a war monger, of our great closet leader and our virtual armament of F35's and Destroyers paid for with real tax payer dollars. Free to destroy the Charter of Rights, the Supreme court and follow whatever laws our great leader dictates are necessary for our own good. Life in the land of doublespeak is good if I say it is!!
Rt

Simon: Are you implying these T-shirts are from the Con Party?

hi anon...well that would be nice. But in the absence of that organizing a good social media poll alert would be helpful.

hi anon...numbers were down but that was principally due to the rainy weather. However I think we can say it rained on Harper's parade or photo-op so thank you Mother Nature...

Regardless of the authenticity of the quote, I know nothing motivates me more than the fear of another Con majority... ;)

hi David...thanks for that link. Gawd I'm jealous. Lord Harp does have sooooo many friends....;)

hi jrkrideau...yes I saw that story. It appears the Cons are upset because Crosbie Jr wore a Harper wig during a really bad performance of Macbeth. Our Lord is very sensitive about his helmet head....

hi anon 5:45....it would be hard for the Cons to do worse than they are in Newfoundland, but still they try....

hi anon 5:56...yes I think you summed up the situation excellently. It is all doublespeak, and it is all insanity...

hi David...since I don't know where those t-shirts came from I can't imply anything. But if they were part of the official merchandising of Canada Day, I might think the Cons had something to do with it...

Well 0 from 0 = 0 so not bad. My thought about the move was more that a lot of older Canadians, (not myself of course cough,) remember John C quite fondly so if you have slightly wavering Con voters of a certain age anywhere across Canada you just might have supplied the final push. John's comments on CBC while restrained for him were not all that mild.

I once fought in a provincial by-election where we lost by one vote per poll. A vote here, a vote there, they add up.

Note: To get the right timing and pronunciation, sing "va-tive" like you sing "na-tive" (long A sound)

At the Canada Day festivities in Ottawa, Prime Minister Stephen Harper couldn’t resist engaging in fear-mongering.
This is nothing new, as Harper frames virtually all his speeches with the idea that only he can keep us safe from terrorists — with the seriously flawed Bill C-51 that puts Canadians’ civil liberties at risk.
In April, more than 100 organizations and prominent individuals signed a letter to Harper demanding dismissal of Bill C-51 (Google it).
Former prime ministers Jean Chrétien, Paul Martin, Joe Clark and John Turner, five former Supreme Court justices, seven former Liberal solicitors-general and ministers of justice, three past members of the Security and Intelligence Review Committee, two former privacy commissioners, a retired RCMP watchdog, the Canadian Bar Association, 60 business leaders in the high-tech sector and dozens of law professors across the country have also denounced the bill.
Harper said on Parliament Hill: “In the Baltic and in Eastern Europe, they (Canadian Armed Forces) are supporting our friends and allies who face Russian aggression. And, in Iraq and in Kuwait, they are fighting the terrorists there, to keep us safe here.
“Now friends, as we saw right here in our Parliament, this threat is everywhere today,” he said, referring to the October shooting outside the National War Memorial that claimed the life of Cpl. Nathan Cirillo while on honorary guard.
“But we have faced great threats before, many times, and we have overcome them. And we shall overcome them once more.”
If Harper steals the October election using the so-called Fair Elections Act, by Canada Day 2016 he will have mandated this new version of our national anthem:

O Kanada! Our Con-ser-va-tive land!
C-51 love under Stephen’s command
With glowing hearts we hear him talk
He’s careful not to speak
From far and wide, O Kanada,
Great Closet Leader’s not weak.
Stephen keep our land, strong and proud and free!
O Kanada, we will bow down to Steve;
O Kanada, we pray he’ll never leave.

Hi David....good one. Although if you keep this up, when CSIS comes to my house, I'm going to have to pretend that I've never heard of you, or claim that I know NOTHING !!!! I'm sure there's something in Bill C-51 that makes mocking Stephen Harper in song, and changing the words of our national anthem a terrorist act. So who are you? ;)