Could the Great Con War on Marijuana Be About To Backfire Badly? 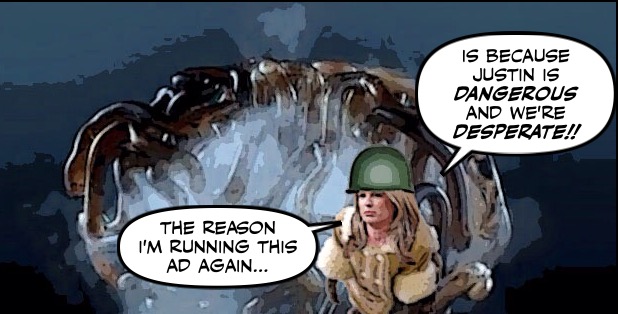 I don't know if you've noticed, but Rona Ambrose has recently stepped up the Great Con War on Marijuana.

By rerunning that old anti-marijuana ad, the one with dirty glass tubing representing the human brain on drugs.

And sticking us with the bummer bill.

Health Canada is spending $1.5 million to air recycled ads on prescription drugs and pot in the run-up to the fall federal election.

"Our government will continue to raise awareness about the harmful effects of drug abuse and encourage youth to choose a drug-free lifestyle," Ambrose said in a statement.

You know, this absurd ad...

From the campaign Canada's doctors wanted nothing to do with.

The Canadian Medical Association, the College of Family Physicians of Canada and the Royal College of Physicians and Surgeons of Canada refused to endorse the campaign, saying it had become a "political football on Canada's marijuana policy."

And like most sane people in this country the first question that comes to my mind, or flows through my glass tubing, is WHY?

With the second question being, is Rona Ambrose crazy or just REALLY dumb?

But of course we all know why she's doing it... 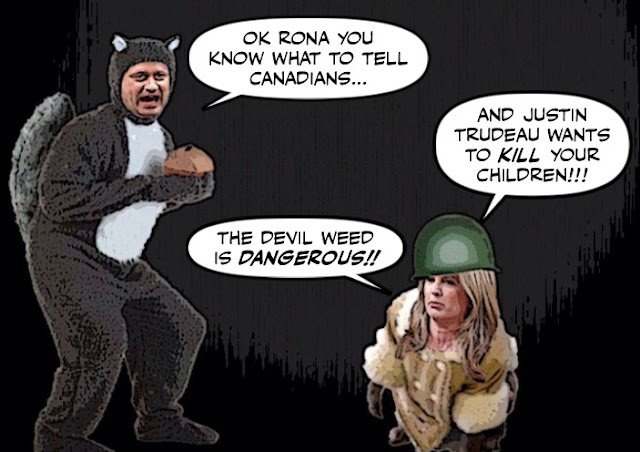 Just to pleasure the base political instincts of her depraved and deranged master.

And although like the movie Reefer Madness. that insane crusade can at times seem so absurd it's hilarious. The truth is it's not funny.

Because firstly, if the government was serious about fighting drug abuse it should be running ads warning about binge drinking, which is a far greater threat to young people in this country than is marijuana.

And secondly, because since Stephen Harper came to power possession charges for marijuana have gone up by an incredible 40 percent. At a time when other countries, are liberalizing their marijuana laws, or legalizing the drug.

So the Cons are ruining the lives of thousands and thousands of Canadians.

And sending more and more young people into our overcrowded prisons... 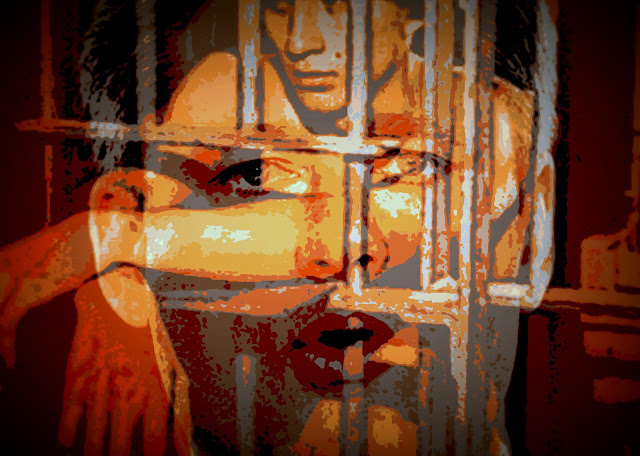 Just to satisfy Great Kinky Leader and their rabid base. Which isn't just insane it's CRIMINAL.

That monstrous campaign may actually backfire on the Cons, and increase their chances of losing the next election.

The pothead vote is real, and it's spectacular, according to an exclusive poll provided to VICE News. Forum Research contacted Canadians across the country to ask if they would be more like to cast a ballot for a pro-legalization candidate. For more than half of Canadians polled, the answer is: yes.

By not only alienating some of their own supporters, but also by motivating more young people to get out and vote.

This time around, bong-hitting youngsters may yet amble to their local school gymnasium and cast a ballot, and probably not one for Stephen Harper.

With 56 percent of those asked saying they're more likely to vote for a pro-pot leader, Justin Trudeau and Thomas Mulcair must be popping champagne (or perhaps lighting a doobie).

And wouldn't that be ironic? 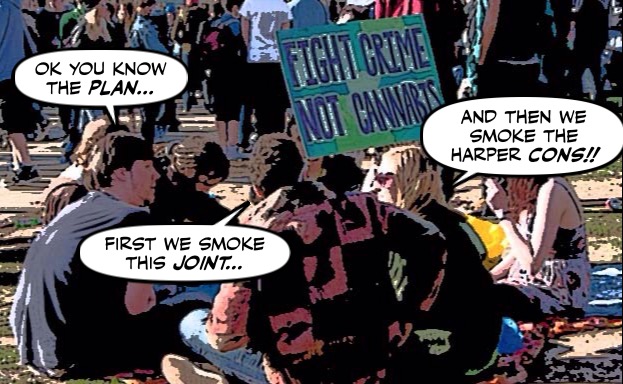 If the Cons succeeded where so many others had failed. Only to end up destroying themselves.

Which of course would be really good news. For this too must be said:

Rona Ambrose is not a real Canadian Health Minister.

Stephen Harper is not a real Canadian Prime Minister.

It is reefer madness... 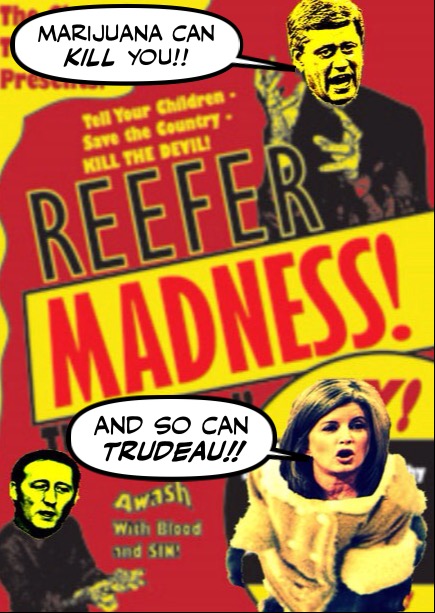 And in the name of safety, sanity and human decency.

The sooner we fire ALL of them the better...

Given that the majority of Canadians support legalisation or decriminalisation, the Cons are just again pandering to their base. They're desperate to get support up as they've fallen through the previously solid 30% threshold, which must scare the crap out of The Party.

It's clear the strategy is to solidify the base and divide and conquer. I hope they fail spectacularly.

Some of those ads are so bad and stupid, I think they will turn voters off. I have noted the new con ads passing as ads for the RCMP. Why we need these ads it beyond me. Everyone in Canada knows what the RCMP is supposed to do, but at the end of the ad its government of Canada, strong, proud, free. so here we have another e.g. of the cons running election ads and billing it to the government of Canada, so we get to pay for it. The cons need to stop wasting that money and use it to put more funding into anti child porn, fighting slavery in Canada and yes it exists just as it exists in the U.S.A. The cons might want to ensure RCMP officers have enough carbines and training along with some new vests and hand guns.

the ads may simply be out there to keep the con brand out there at tax payer's expense. of course the cons don't care about kids doing drugs. If they did care they would have gotten rid of all the drug dealers in specific sections of Surrey, B.C. The city is still short at least a 100 RCMP officers.

if the cons were really concerned about drugs they would increase funding for drug and alcohol rehab. Of course the biggest drug being sold these days is booze and its so easy to get. See the con ads on that? of course not. their corporate master would be opposed.

hi Noah...their position on marijuana is so crazy I have to believe it's about more than trying to pleasure their rabid base. It also has to have something to do with Harper's insane compulsion to destroy Justin Trudeau even though Mulcair is more of a threat these days. It's something so deeply disturbing only his shrink could explain it...

hi e.a.f...as I told Noah, only a psychiatrist could explain Stephen Harper's Great War on Marijuana. But as I pointed out in my post, it's still sending far too many Canadians to jail, so it's really got to stop....