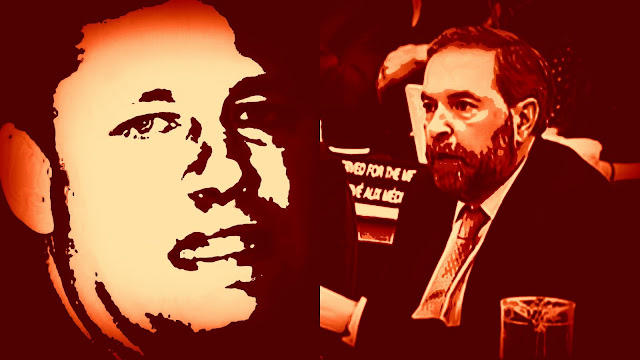 A few days ago I wrote a post defending Tom Mulcair from a Maclean's story that claimed that he once asked Stephen Harper for a chance to serve him.

And only turned down the job because he wasn't offered enough money.

Having watched Mulcair in the Quebec National Assembly long before he entered federal politics, something about that story didn't seem right.

And sure enough it seems it was just a grotesque smear.

Senior Conservatives and New Democrats are defending Thomas Mulcair’s portrayal of a period in early 2007 when the NDP leader — then poised to leave the provincial Liberals in Quebec — was in private talks with headhunters from Prime Minister Stephen Harper’s Conservatives.

Mulcair, according to NDP and Conservative sources, was interested in becoming president of the National Round Table on the Environment and the Economy, a since-disbanded arm’s-length organization that produced critical reports on the government’s environmental record.

And when Stephen Harper had other ideas... 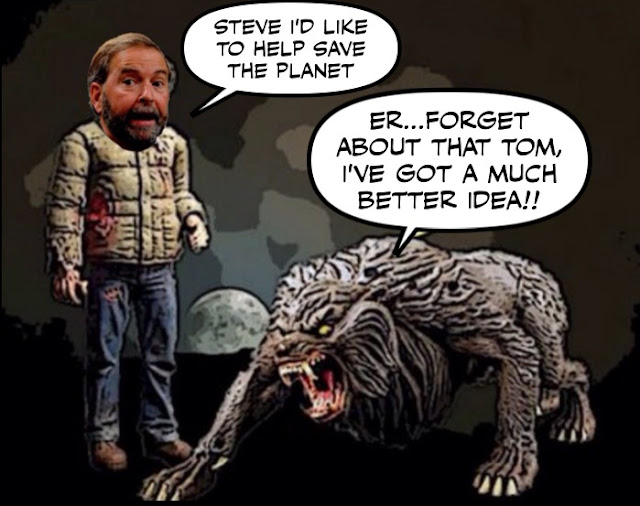 One of the Conservative sources confirmed to The Sun that the Tory goal at the start of the process was to recruit Mulcair as an adviser, then have him become a candidate. But neither Tory source recollected Mulcair ever indicating he wanted to run under the Tory banner in 2008.

He walked away from him.

And yes, just as I wrote in my post, it seems the attempted smear came from the former Harper stooge Dimitri Soudas.

The sources said the Maclean’s piece was based primarily on statements by former Harper media spokesman Dimitri Soudas, now with the Liberals due to his romantic relationship with Tory-turned-Liberal MP Eve Adams. “This looks like (it’s about) Mulcair’s rise in polls and Liberals getting angry and using this and trying to twist this,” one said.

And yes, it also must be said that Justin Trudeau should have known what he was getting when he invited Soudas and his beloved Eve Adams to join his party. 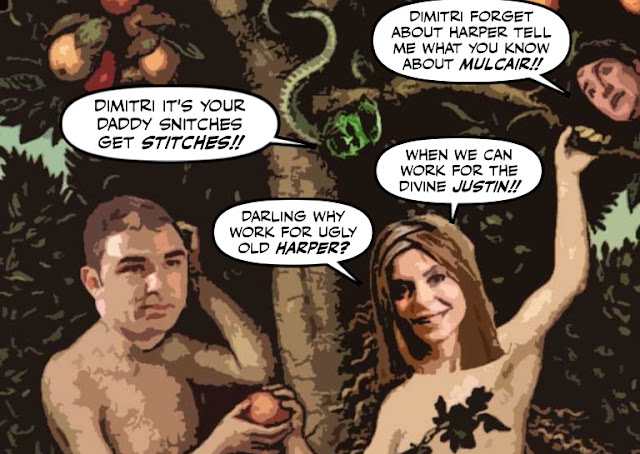 And to think that I once thought that the Liberals would use Dimitri to attack his former master, by revealing some of his secrets.

And I'm sure you know how I have always believed that our blind partisanship can only destroy us.

And how hard I have worked to try to get the progressive parties to work together, and concentrate on the REAL enemy.

How disappointed I am.

And how low have we fallen...

I said it before and I'll say it again...
If heil harper "wins" another election, it will be as a direct result from trudeau's severe case of megalomania. He has stated emphatically on a number of occasions he will never entertain working with the NDP and will not consider a consolidation of efforts to take care of the real cancer eating away at Canada. I'm sure he thinks that by doing this he can inherit the unchecked powers that C51 will give him so, rather than working for the good of Canada (again), he would rather roll the dice on the impossible chance that he will win this next election thereby becoming the next emperor of Canada and the people that follow him and support him are just as deluded and, for the most part, just as arrogantly stupid as he is.
"They voted for C51--they're not here for you..." should be the campaign motto the NDP uses to describe trudy and his bunch of watered down con-wannabes. LiberoCONS is the way I read one blogger describe them.
How much more accurate can a person be? ;-)

.. forget the bible .. keep Emily Dee close to hand ..
She does send a serious broadside at Mr Mulcair ..
Why doesn't he just hire her.. the smart move I'd say
http://pushedleft.blogspot.ca/2015/07/excuse-me-mr-mulcair-kyoto-really-is.html

Another stupid move by JT. C-51 and now this smear campaign. This to shall come back to haunt him as the orange wave continues to grow. I guess he really is "just not ready".
JD

hi anon...Justin and his Liberals have made some serious mistakes, but I refuse to lump them in with the Cons. Because I know that they share our basic Canadians values, and nothing is as evil as the Harper regime. But then that's me, I march to my own drum. My fondest dream is to help unite progressives into a mighty coalition that will destroy the Cons. So fire away if you must, and so many of my NDP and Liberal and Green friends. But please don't hit me in the crossfire... ;)

hi Alison....having followed your great blog for so long, I know that you and I would never have allowed the truly ghastly Dimitri to enter any progressive party. I must admit that when I heard the news I consoled myself by thinking that Soudas might be a useful weapon to use against the Cons. Ten years of the Harper regime have corrupted me as well.;) But now I see he hasn't changed his stripes, and that he is still as ghastly as he always was...

hi salamander...I have a lot of respect for Emily Dee. She is truly a historian of the Con's sorry record. And she does make some valid points in that post. But she is also a ferocious partisan, and her criticisms of Mulcair's environmental position isn't really fair. For Mulcair did pay a heavy price for trying to defend a park from developers, and the job he was seeking would have allowed him to criicize the Cons for their abominable record on the environment. The fact that Harper abolished that job speaks volumes in that regard. And there's one more thing. Despite my fondest wishes there can be no doubt that we don't live in a socialist paradise, so everything is relative. Which is why I am not a harsh judge of either Mulcair or Trudeau, and try to point out their strengths rather than their weaknesses. However, one day I fully expect to be perfect myself, and then I will be ruthless... ;)

hi David...thanks for that cartoon. But although we can use that against the Cons it's not really fair to Mulcair. For the job Mulcair was seeking was that of an independent environmental critic, which would have allowed him to criticize the Cons. So had he got the job, I'm sure it wouldn't have been long before he was looking for another... ;)

hi JD...I'm not sure how much Justin knew about Soudas' little plan to smear Mulcair, because Dimitri is a very shifty operator. And back in the days when some corrupt union bosses were taped in a limo calling him the King of Montreal, I had the feeling he was freelancing. However, because Justin did allow Soudas to join his party, no doubt in a misguided attempt to keep Harper honest, he must live with the consequences, an no it doesn't make him look good...