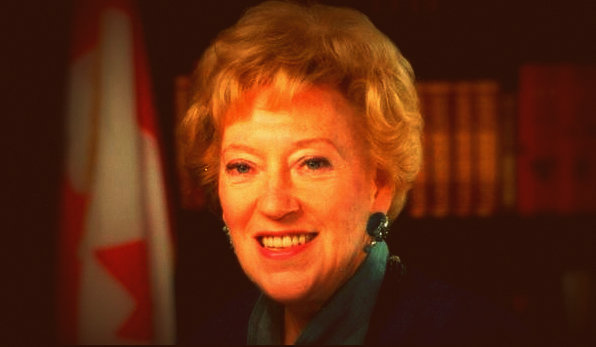 I don't believe I've ever written a tribute to a Conservative in this country. For obvious reasons.

But yesterday I retweeted this message from this decent Conservative...

To announce the death of his friend and great Canadian Flora MacDonald.

If Flora MacDonald had been born 20 years later, she might well have been Canada’s first female prime minister. As it was, the Cape Breton-born politician, who died early Sunday morning in her 90th year, broke down the invisible door that barred women from high office in Canada.

The political path she blazed led her to become the first woman in the western world to serve as foreign minister and the first to challenge for the leadership of Canada’s Progressive Conservative Party.

Who managed to prove in her long and excellent life that once you could be both: Conservative and decent. And who stood up for our precious Canadian values until the day she died.

So although it disgusts me, it doesn't surprise me, that this miserly message was all Stephen Harper managed to write or excrete to mark her passing...

I mean can you believe it? He couldn't even spell her name right.

But then of course he hated her and everything she represented.  And he surely must have known that she despised him for what he did to her party, and has done to her country.

As she made clear in this 2003 Star article, shortly after she found out that Peter MacKay had sold out her Progressive Conservatives to Stephen Harper's ghastly red neck Alliance.

My reaction to the agreement in principle, signed secretly by MacKay and Stephen Harper in October, 2003, was first of all one of incredulity, then anger that the party decisions so strongly expressed in Edmonton and endorsed by MacKay during the leadership campaign could be so easily jettisoned.

Further, the fact that he would willingly preside over the demolition of a historic 150-year-old institution that has done so much to build this country leaves me asking how he defines integrity and principle.

Made it clear what she thought of that betrayal, and let those scummy Reform Cons know that she would not be marginalized or silenced... 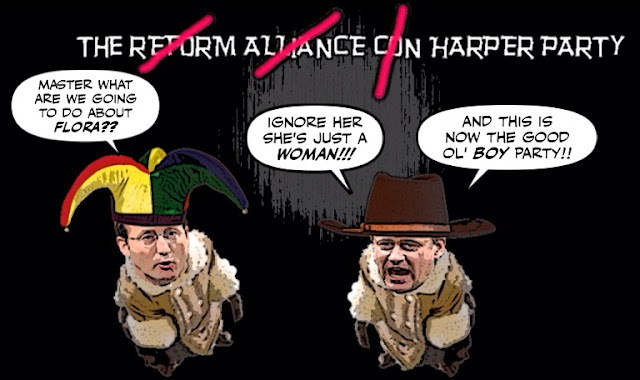 I have earned the right to speak out when the future of the Progressive Conservative party is being threatened by betrayal at its current highest levels.

The party's future lies not in some right-wing alliance that would violate the progressive and moderate traditions of its former leaders, but with a renewed emphasis on the values that the great majority of Canadians feel represent their views.

Not by them, or for that matter by ANYBODY. Not after the way she had to fight for the rights of women to be taken seriously as politicians... 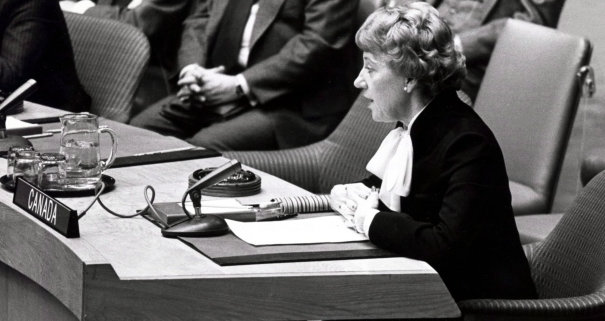 And yes, I like to think that some of that fighting spirit that allowed her to survive betrayal and disappointment, came from her Scottish heritage.

In her Ottawa apartment, overlooking the canal on which she often speed-skated to her parliamentary office, Ms. MacDonald kept a photograph of the gravestone of the woman for whom she was named: Flora MacDonald, preserver of the life of Prince Charles Edward Stewart. Her name will be mentioned in history, and if courage and fidelity be virtues, mentioned with honour.

Because while Bonnie Prince Charlie was a hopeless idiot and hardly worth saving. As a Scottish Canadian I was very proud of Flora. And she was a Canadian treasure.

So I thought I'd end this post with a song that isn't even Scottish. But when performed in the hallowed grounds of Edinburgh Castle where I'll be next week.

Sums up how I feel about her...

Amazing grace indeed. Thank you Flora MacDonald for standing up for our Canadian values, for the rights of women, and for basic human decency.

Who knows, when we destroy the Harper Cons and save our country, we might just save your old party too.

And one way or the other, we'll not forget you... 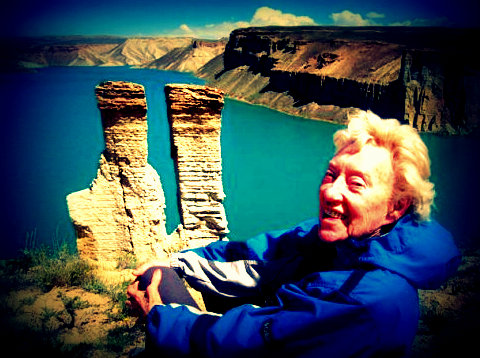 She truly was all that was decent in the conservative days of old and I'm sure she wept for the party that's been destroyed by Harper and Mackay. They should be ashamed at what they've done to obtain and retain power but there is karma, and it will seal their fates very soon.
JD

Flora MacDonald was a PROGRESSIVE Conservative with integrity. I can't think of even one female (or male) Con MP that can hold a candle to her. RIP Flora.

Thank you for this, Simon. In addition to her Scottish heritage, it must be noted that her mother was a Newfoundlander - a true Newfoundlander from pre-Confederation times. I had the great good fortune to meet Flora and give her a tour of St. John's. Such was the regard in which she was held that at the top of Signal Hill, she was approached by an older couple who wanted to shake her hand for what the was then doing for seniors in Canada. She told me of her visits to Afghanistan - barely a year after it was bombed - and I couldn't imagine having the guts to go there and do what she was doing to help rebuild schools there.

Lastly, let me use this opportunity to recommend this speech to you (assuming that you have not yet seen it, though that would surprise me): https://www.youtube.com/watch?v=lZAmhB55_-k

Have a great trip to Scotland!

Thanks for the post Simon. I did not fully appreciate her contribution to Canadian society, hopefully another will come forward to carry on the fight against the retrograde dark side of humanity so embodied by the current Con regime.
RT

Very nice tribute to a great Canadian Simon. Agree with the comments posted, she made all Canadians proud.

Your Harper cartoon bubble-speak, 'Ignore her she's just a WOMAN'... too true and too funny!

Have a fun and safe visit to Scotland and come back even more energized for the ongoing and successful 'Harperectomy.

For many of us she was an inspiration in a time when women were not so much in politics. She sent the message it was possible. Ms MacDonald made a real contribution to Canada and the party she represented.

Flora MacDonald was a progressive (aka traditional) Conservative, who are mostly extinct.

Hugh Segal:"Traditional Conservatism is about society, about how people in
society connect with each other, what are the underlying values, what are
the relationship between the law, human rights, economic freedom, social
responsibility. It's a very integrated view of society. It's a very Tory
view of society."

"Neo-conservatism, I think is really the aggrandizement of selfishness.
It's about me, only me, and after that, me. It's about investing only in
things that produce a huge profit for yourself, and it's not about society
as a whole, and it tends to be very insensitive to those people who, for
one reason or another, have fallen beneath the poverty line, and its
engaged in presumptions that those people are all poor because they are
lazy. Neoconservatives believe that fundamentally. The truth of the matter
is that the vast majority of Canadians beneath the poverty line in this
country actually work. Some of them hold down two jobs, and don't actually
get sufficient income in order to meet their basic obligations. So it's a
very different view, and I am a traditional Conservative, and I don't
apologize for that."

hi JD...yes Flora was a decent Conservative, and her reward for that was betrayal and disappointment. But as you say there is karma, and Flora will be remembered long after the Cons are forgotten...

hi David...yes she was a Progressive Conservative, she did have integrity, she was a really nice person and my kind of Canadian...

hi Martin...Well I should have known that her Scottish blood couldn't explain ALL her good qualities ;) Being a Newfoundlander would also have made her a good person, for they are warm and excellent people and I love them dearly. And yes, I have seen Mhairi Black's speech, and I was very proud of her. She is an excellent role model for young people, she is winning fans not only in Scotland, but also in the rest of Britain. And the way the SNP has been able to get the young involved in the political process should inspire our progressive parties to do the same. And thank you for your good wishes. I'm looking forward to getting away from Harperland for a while, and will use the occasion to recharge my batteries for the battle ahead...

hi RT...you're welcome, it was a pleasure to remind Canadians of the legacy of that great Canadian. Flora fought the good battle, the pictures of her in Afghanistan are really amazing, and I for one will never forget her...

hi Bill...thank you, as I said it was a pleasure, for she did make Canadians proud. She embodied all the qualities I believe in, the best qualities of this country. I understand when she talked about the Harperites she would get so angry she could hardly get the words out to describe. But isn't that a familiar feeling? And thank you for your good wishes, I will consult the fierce spirits of my ancestors, and come back ready to screen up and assist in the Harperectomy... ;)

hi e.a.f...Flora was a woman of her generation, and always totally classy. But in her way she stood up to those who would diminish the rights of women. And she was a fantastic role model for young women and did blaze a trail for them. We all owe her so much for being such a decent Canadian...

Hi David...I always keep hoping that somehow the old Progressive Conservatives will regain control of their party. But as long as Alberta keeps electing old Reform Cons in record numbers that will never happen. Which is a pity for the Conservative party and the rest of us....

She was wonderful. I wonder where they are, those old Progressive Conservatives. One of them sold us out so the others should fight for their rightful progressive party and help save this country. Were they all so caught up in the idea of being in control that they forgot their values? Come out of the woodwork and fight.

I also met Flora MacDonald; she was at the Alternatives headquarters in Montréal to discuss human rights initiatives with their team; think even in Palestine and elsewhere in the Middle East. Remember her talking about STILL commuting on skates via the Rideau Canal, which is also exemplary in terms of active transport and keeping fit in later life.

There is a small rump group of "Progressive Canadians" but they haven't won any seats. To their credit, they vehemently oppose C-51.

I hope that in Flora's honour, there will NOT be a huge ugly Mother Canada statue fouling the beautiful pink cliffs of her home province.

hi anon...yes, from a proud party that helped build this country, to a scummy cult that is slowly destroying. How low has he taken them how low have we fallen...

hi anon...I also often wonder where those Progressive Conservatives. Some sold their souls for power, but hopefully there are others who will one day get their party back after we destroy it...

hi lagatta...she was a great woman, and her tireless work for humanitarian causes was a marvellous end to a great career. Thank you for your good wishes and oh yes...Sébastien vient avec moi, j'ai besoin de quelqu'un pour porter mes bagages... ;)