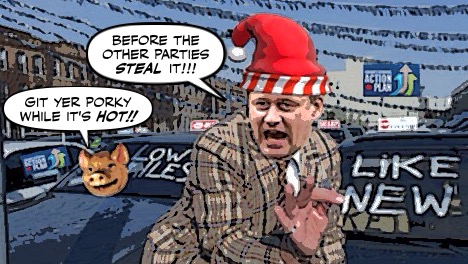 Well there was Stephen Harper yesterday, looking and sounding like a sleazy used car salesman, declaring it was Christmas in July, and feverishly trying to buy an election.

And in all the years of writing about him and his corrupt, morally depraved regime, I don't think I've ever seen a more disgusting spectacle.

Two days ago in this letter marked "confidential" he was urging his caucus to look like Con Santas, and lie like thieves.

Let me be perfectly clear: if Justin Trudeau and Tom Mulcair form the next government, they will take these benefits away from families, raise taxes, and put Canada back in a cycle of spiralling deficits. We only have to look at Greece to see where that plan leads.

And yesterday, in a what was called a "special message" by his propaganda machine, there he was in all his greasy glory...

Trying to make it sound like only he cares about families with children, and only he can protect them from big bad government, even though he is the government.

While his scummy minion Pierre Poilievre tried to make it look like those $3 billion child care dollars didn't come from government, and our taxes, they came from the Conservative Party.

Federal Employment Minister Pierre Poilievre’s office is refusing to explain why he wore a Conservative Party shirt on Monday when he hosted a government news conference trumpeting the delivery of $3-billion in child benefit payments to Canadians.

This partisanship during a government event arranged by Employment & Social Development Canada appears to contravene Ottawa’s own communications rules, which say public servants must inform Canadians about programs and policies “in an accountable, non-partisan fashion.” 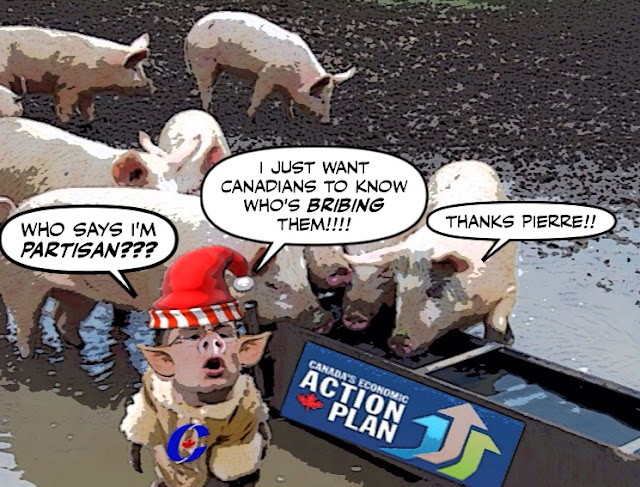 Because like his depraved leader he will flaunt the rules, he will lie, he will say or do ANYTHING to try to win the next election.

And as I said before it couldn't be a more revolting spectacle.

But the good news is that the Cons are only behaving like that because they are desperate. And that desperation will be their undoing.

Because their frantic plan to bribe Canadians is only too crass and too obvious.... 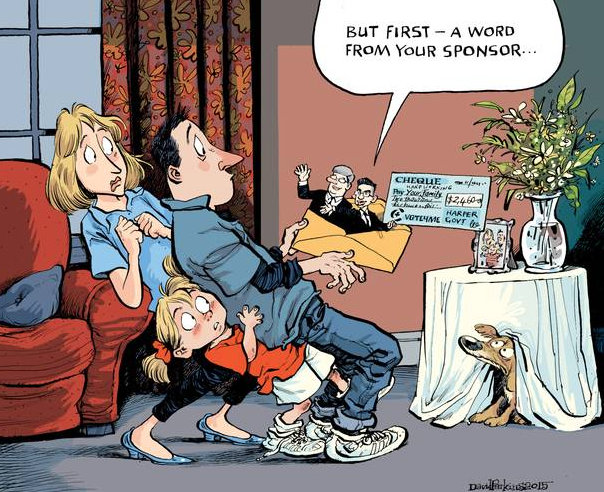 Most Canadians can see what  Stephen Harper is trying to do... 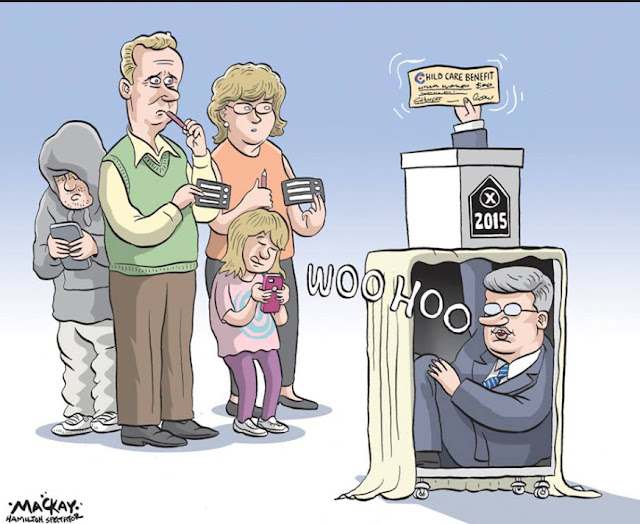 They know much of the money will be clawed back.

With the enhanced UCCB, Canadians will receive an extra $720 annually for each child under 18, including the lump-sum payments this week retroactive to the start of the year.

However, on the same day the UCCB came into effect (Jan. 1), the federal government also eliminated an existing child tax credit of $2,255, which was worth $337.50 per child annually in 2015. That change alone wipes out almost half of the UCCB increase for taxpayers.

They know a cheap bribe when they see one.

And when even Margaret Wente gets it, you know the Cons are in trouble.

Nobody ever claimed that subtlety is the Harper Government’s strong point. Its basic election strategy is as subtle as a two-by-four. Mr. Harper is relying on two emotions: greed and fear. He wants you to remember that even if you’re not that grateful for the dough, you’re going to lose it if the bad guys win.

Is anybody fooled by this sudden outburst of solicitude for our middle-class children? I doubt it. The voters are as cynical as the politicians. Most voters know there are far more efficient ways to deliver tax relief, ones that don’t require printing presses, cheques and postage stamps. But that’s not how governments behave. They want to take the credit. If Mr. Harper could figure out how to deliver you a bag of cash in person, no doubt he would.

So if the opposition can make it clear to those families with children that they don't intend to "steal" their money, which shouldn't be too difficult. The Cons will look like liars. Again.

And those families will take the Con payola, and STILL won't vote for them.

You know yesterday when I got home, I went to my favourite secluded beach on the island... 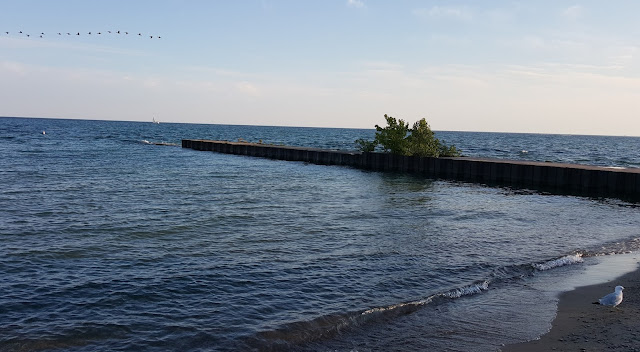 I sat on the old pier, let the cool clean breeze from the lake sweep over me, and it felt so good. Because I have to admit that the stench of Con corruption is making me feel almost physically ill.

I simply can't believe how low this country has fallen.

And what enrages me the most is that Stephen Harper and his rotting regime could believe they can bribe Canadians so blatantly, believe that a few miserable dollars can buy them their love. And that we are as low as they are.

But that only makes me more determined to help defeat them, and clean this country up.

For they really are the most corrupt government in Canadian history, they are sleazy Con artists, they are crazy desperate, and they are capable of anything... 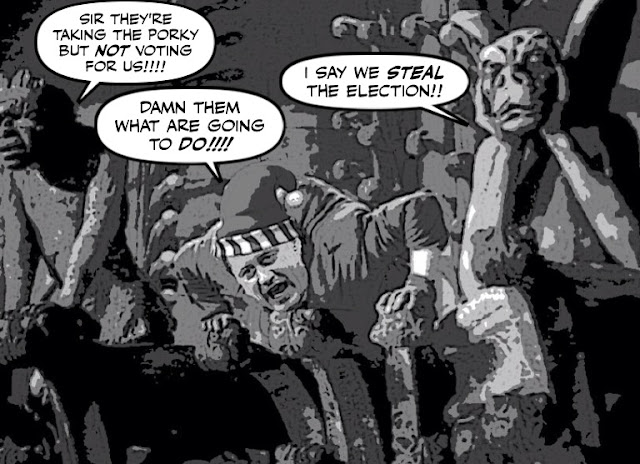 But we will use their own corruption against those monsters.

And in a country desperate for change, or something better.

It will help destroy them...

Despite your feelings of despair and 'threats' to quit blogging over the past several years, thank you for hanging in there. We need your passion and determination to see us through the next election and help rid the country of Harper and his CON government.

There is nothing I'd like better than to see the CON party decimated. It's been done before and we can do it again, but we need more Canadians to get their hands off their smartphones and their heads out of the sand. We (progressives) all need to do our part by encouraging people to get out and vote, even if it feels at times like and uphill battle.

Again Simon, thank you for being there. I read your blog daily and it means a lot to me that you take the time to share your thoughts. Gotta believe that there is hope in the very near future!

What he forgets to mention is that what he will do to pay for all the goodies is to kill our health care system.

The Cons are the most manipulative cynical politicians Canada has seen in a long time if ever. They think that dressing up the decay in bright shinny fear and greed packaging can mask out the telltale odor that people are finely attuned to. Their strategy is to keep the product cool and spray around enough perfume to keep it masked from enough people to steal the election. They certainly cant hide it from the majority but its all about winning seats by targeting people that will eat anything and never seem to suffer any ill effects and those that don't listen to their senses and do suffer but cant resist the shiny packaging. The counter strategy is too turn up the heat but they have the thermostat locked down and are about to start spraying the medial perfume showing our great closet leader in all sorts of awe inspiring settings that our tax dollars paid for over the last six months. There is still a chance we could wake up with a horrible case of food poisoning after election day.
Rt
Rt

If a week (or a few days) before the federal election, all the polls show the Cons going down to defeat, would you be surprised if the RCMP announced that one or more ISIS/al-Qaeda sympathizers were arrested "just in time" before they could detonate some bombs?

Segue: And now we see 4th place in Quebec trudy and damn-near non-existent party helping the cons win another election by attacking Mulcair on a non-issue that could easily be handled after they threw heil harper out on his ass and then into jail once the election was over but NOOO. The wannabe boy prince with terminal peter pan syndrome has to start his meaningless bullshit rhetorical points to pretend to be a leader (he's beginning to sound more like harper every day) and hoping like mad some dimwit out there is going to mistake him for a leader and vote for his tired, old, corporate lapdog party instead of for one that actually has a good chance at forming a new majority government and maybe even bringing some Canadian perspective back to Canada instead of the same corporate welfare mentality that rules supreme in the cons' and the liberocons' philosophies these days. He's nothing but a spoiler vote for the cons. That's why heil harper keeps attacking him. It's so the rubes will keep mistaking him for still being relevant. heil harper's not as stupid as joe oliver looks, by yimminy!

hi Wendy....although I occasionally have my moments of despair, and although I occasionally regret having vowed to blog until the day Harper and his Cons are defeated. I am only human, and I did think that I'd only be blogging for four years, and now I'm in my tenth year. I will keep blogging, and organizing, and doing my part to encourage others to resist that monstrous un-Canadian regime, until the day they are toppled. And at least three days after that so I can properly celebrate. ;)
So thank you for your encouragement and support. My readers are truly amazing, and they can be sure that I will never give up and never lose hope that better days are coming....

hi Bill...and thank you for your support and encouragement. As I told Wendy your support keeps me going, and trying to be a better blogger. If all I can do is cheer up and encourage other progressives during this dark time in Canadian history I will be more than satisfied....

hi anon...I am always keeping a close eye on what Stephen Harper is planning for our medicare system. As I have said many times before my heroes are healers not killers. And I can never forget that Harper was first elected with the support of a group that was founded to try to destroy our precious medicare system. So neither Harper nor his Cons can ever be trusted...

hi RT...good comment, and sadly only too true. They are the most disgraceful government in Canadian history, and the most manipulative. They lost their moral compass a long time ago, if they ever had one, and they are capable of anything. And because those who oppose them are divided, it is still possible that we could wake up the day after the election with a very bad case of food poisoning. However, I remain confident that will not happen, I will never surrender to despair, and I will keep cheering on the Canadian resistance until the day we are finally free, and we can start rebuilding our country and making it even better than it was before the Cons seized power...

hi David...I would not be surprised by anything that might happen before the election. I am deeply concerned by the activities of the upper echelon of the RCMP, I fear they have become politicized, and we should be ready for anything...

hi anon...I have seen that the Liberals are dredging up the Clarity Act and as a Canadian and a Quebecer it distresses me deeply, because it can only play into the hands of the separatists and the Con regime. But I will address this question in one of my next posts, because we need to nip this one in the bud before it stirs up some old ghosts and leads us all to disaster...