First It Was Harper's Police Now It's Harper's Army 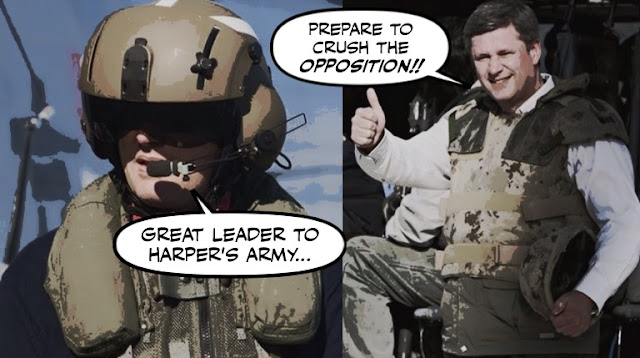 A few days ago I wrote a post about how Stephen Harper was turning the RCMP into Harper's police.

Just another tool in his campaign to try to win the next election.

Anyone receiving Department of National Defence press releases could be forgiven for thinking the only thing happening on Canadian military bases over the past two weeks has been photo ops. Since Parliament rose for the summer on June 19, the department has sent out more than a dozen press releases and held several press conferences where Conservative MPs have announced investments in infrastructure at local bases and military facilities.

Or the Department of National Con Defence doing their best to re-elect their Great Leader.

And of course, it would have to be Julian Fantino handing out all that money.


Honoured to meet with the CAF personnel in Trenton who will benefit from our Government's support pic.twitter.com/uJZzOM3Xsx
— Julian Fantino (@JulianFantino) July 3, 2015


The most recent was a photo op at CFB Trenton where Associate Defence Minister Julian Fantino and Conservative backbencher Rick Norlock announced $10 million in new construction.

Fantino has actually been the main attraction at a number of events over the past two weeks, making appearances at military facilities in Toronto, Halifax and Kitchener. At each stop, he and local Conservative MPs have posed with Canadian military personnel for photos that later show up on social media.

The Con who would try to buy an election with millions of dollars of OUR money.

And the military only to happy to help him by starring in his photo-ops... 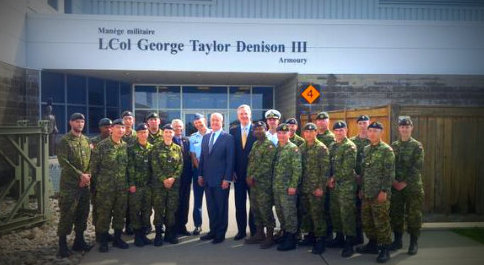 The ones who while working for their depraved leader, have all the money in the world for massive infrastructure projects.

But never enough money to help veterans or injured soldiers. 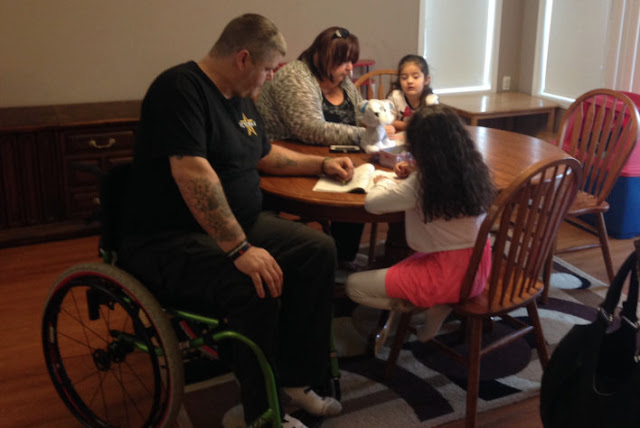 A soldier who was injured in an explosion in Afghanistan is fighting for his home. Sgt. Kevin Nanson has been in a wheelchair since being injured when an improvised explosive device went off in 2008. The military is paying to have his home renovated to accommodate his wheelchair, but Nanson says after two years, the work is far from complete and his house is uninhabitable.

Nanson says the federal government is telling him he is on his own to pay for the work to be finished, and he is also facing discharge from the military, which means no more paycheques.

But then of course this is not a new story. The generals who run Harper's Army have been helping him from the moment he came to office.

Backing up his belligerent messages, and providing him with one absurd photo-op after the other... 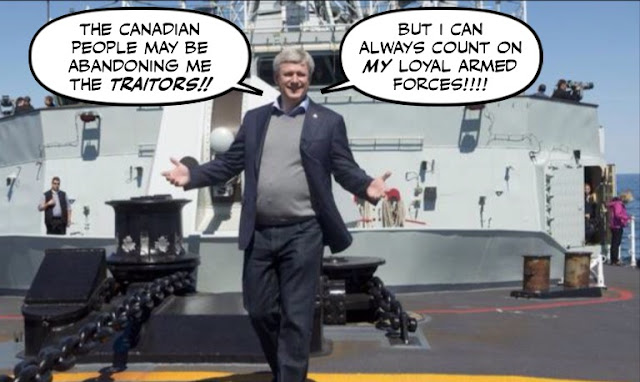 So all I'll say is what I've always said. In a democracy an army is supposed to be strictly neutral. If it's not it's not a democracy.

And it's not the CANADIAN armed forces.

And if the generals who are collaborating with the Con regime don't understand that, they will drag down the reputation of the entire military.

And when the day of justice finally arrives.

They will end up in the same place as the monstrous regime they served so well... 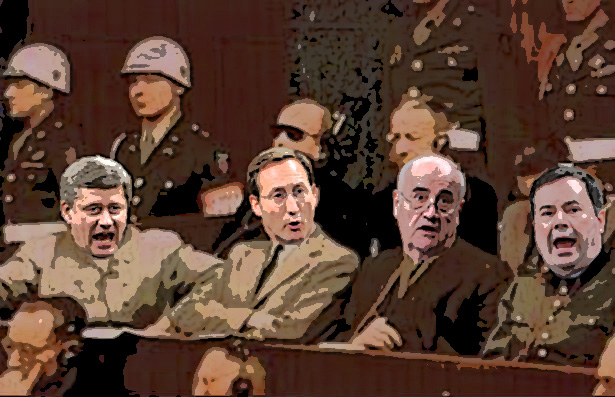 And then we'll take back our army...

“The processing is going down because there are fewer people to do the processing,” said Liberal veterans affairs critic Frank Valeriote. “They cut Veterans Affairs to have money to spend during an election year to pander for votes.”
http://ottawacitizen.com/news/politics/harper-urges-voters-to-avoid-risk-of-ndp-or-liberals-in-power

Our military has been compromised at least as far back as Randy "The Big Cod" Hillier. After talking Paul Martin into approving the Kandahar gig (Martin's aides suggest Hillier completely misled the then PM), Hillier turned all gushy when Sideshow Steve took over. That began when Hillier stood up on his hind legs and praised Harper for ending the armed forces' "ten years of darkness" under the Liberals.

And what did they get for powdering Harper's backside? Well, today's defence budget has fallen to just below 1% GDP (it was last at 2% under PET). We have a navy that can't sail a task force into any of our three oceans because all the supply ships and essential air defence destroyers are heading for the scrap heap and their replacements are nowhere on the horizon. We have an army with gear clapped out from its decade of futility in Afghanistan (the Hillier Mission). We have an air force whose personnel have to cannibalize museum displays for spare parts to keep search & rescue Hercules aircraft operational. Meanwhile Harper is gobbling up the remaining service life of our CF-18s by having jets boring holes in the skies over the Baltics and ineffective bombing of ISIS positions in Syria and Iraq.

Under the current military and political leadership we have a military that routinely and deliberately misleads Parliament with impunity, even when they're caught out by the parliamentary budget officer and the auditor general. There was a helicopter contract where DND sought purchasing authority and used the cost of a bare bones airframe, concealing from Parliament that they intended to order a far more costly aircraft all tricked out with the latest whistles and bells. They lied their asses off to Parliament about the costs of the F-35. It goes on and on and yet nobody ever gets held accountable for what are institutional attempts to defraud the nation.

Then we have a chief of defence staff telling us how his boys are "biologically wired" to mess around with the chicks. Someone should have biologically wired a couple of electrodes to his cojones and let him ride the lightning. I think that would have cured him.

It's a persistent pattern, Simon. Whether it's the public service or the armed forces or the state police, Harper has very successfully sequestered them from the Canadian people and quietly transformed them into his partisan personal agencies. And, with the exception of some brave voices in the public service, they've gone along with it in what is nothing less than a betrayal of their duty to the country.

It part of the job to show up for these photo ops. when your commanding officer tells you to smile, you smile. What the military and Vets do in a private voting booth may well be very different. They know its all a joke. there are so many stories of Vets not being able to access funds and services to not vote against the cons would be voting for them to continue to treat the military and vets like dirt.

hi anon...yes you're right, they did cut the money they should have spent on veterans to help get them to their "balanced" budget, and have more money to try to bribe voters. And it couldn't be more disgraceful. But the good news is that veterans have long memories, and they will make the Cons pay for that on the campaign trail. I have promised the vets my complete support, and somebody sent me a very nice action poster that I hope to run soon...

hi Mound...thanks for that excellent and very comprehensive comment. And yes you're right it did start with that blowhard Hillier. I clearly remember how he got us into the heart of Taliban country without the proper equipment to defend against IEDs because it cost me a dear friend, as well as costing so many other lives. So I can never forgive him. And yes, the Harperites have politicized every government department, who now have their commissars, and all act like stooges.
And what shocks me the most is that nobody as far as I can recall has come forward to denounce that blatant politicization. So yes Harper does corrupt everything he touches...

hi e.a.f....I'm not blaming the ordinary soldiers, who as you point out, must follow orders. I know several very decent members of our Canadian Forces, who are as idealistic as I am. I blame the high command that is ruining the reputation of our army by pandering to the Cons so shamefully...