Stephen Harper and the Growing Anger of Canadians 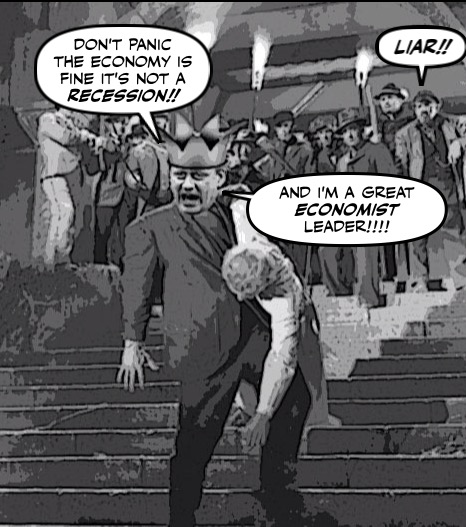 I don't know why it's taken so long for many Canadians to be angered by Stephen Harper, considering what he has done to Canada.

But a new EKOS poll shows that anger is growing.

And it has a lot to do with the state of the economy.

Two days after the Bank of Canada predicted a second consecutive quarter of negative growth, the newest EKOS poll shows the economy to be Canadians’ number-one policy concern.

With 40 per cent of Canadians saying the economy is their primary concern, this development is bad news for the Tories — ironically, as they have made their purported strength on economic issues a central point in their pitch for re-election.

For Harper who has spent almost a billion dollars trying to portray himself as a Great Economist Leader the news couldn't be worse.

And this couldn't be more devastating.

After months of bad news on the economy, more voters are now ‘angry’ (31 per cent) than ‘discouraged’ (29 per cent), ‘hopeful’ (20 per cent) or ‘happy’ (12 per cent) with the prime minister. This is the first time EKOS’s data have shown ‘anger’ as the leading emotion for Stephen Harper; for most of 2015, ‘anger’ has trailed ‘discouraged’ but has been in a dogfight with ‘hopeful’.

For nobody believes the economy will improve before the election, so that anger can only grow.

He will not be able to blame it on others... 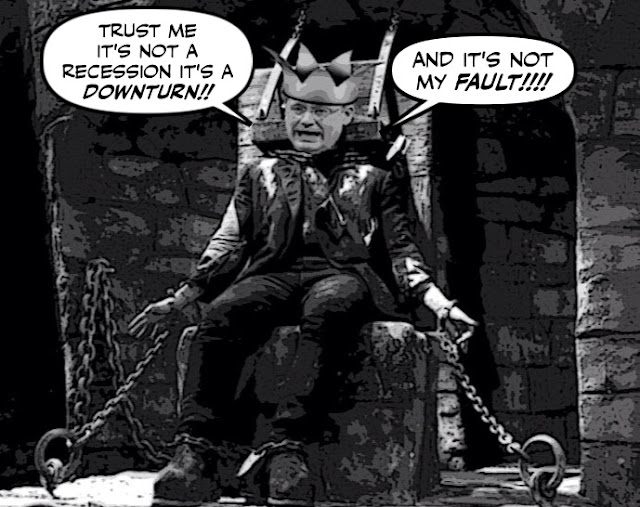 The Conservatives have tried to blame the recent economic downturn on external factors — Greece and China — while casting themselves as Canadians’ best choice to navigate the choppy waters.

But the Conservatives’ strategy might be missing the point, suggests Graves. “Canadians have not felt a significant improvement in their standing of living (since 2011),” he said. “Instead, the economy is seen as being in recession and the vast majority of Canadians actually see themselves as stagnant or as worse off.”

So he must be as desperate as he has ever been.

And when he can deny reality no longer, won't he look ridiculous? 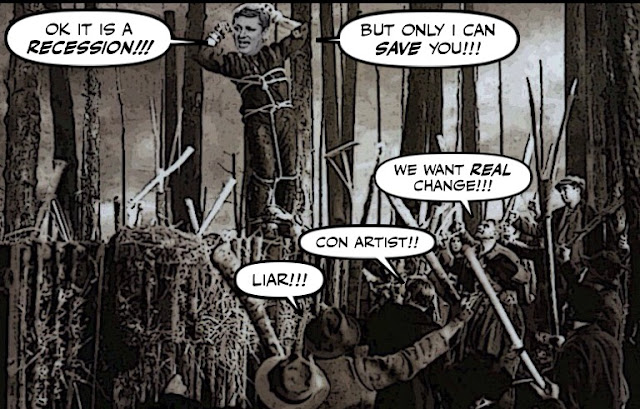 Canadians know a recession, and a fraud when they see them.

Their righteous anger is growing.

And it will destroy him...

He tried to take credit in 2008 (before the "crash") for a good economy which, after only 2 years in power, he had nothing to do with. Now, after 9 years during which his policies have definitely impacted Canada's economy, he blames others. PMSH is nothing but a bully and a coward.

Harper's total economic strategy was to sell more oil while developing a cottage industry of arms manufacture. The oily vision is in the toilet and the fledgling arms (defense) industry is not yet fully developed as Canadians are still rather sensitive to the prospect. Seems the legacy Tories might have adopted the strategy of fingering Harper for all of the current ills making it much easier to rebuild confidence in the party once he and his closest associates are gone. Once the stage is set with negative public opinion perhaps another scandal will emerge to clinch the deal. We can only hope for such a fitting end.

Be aware Harper has bought up thousands and thousands of ethnic votes. There are more of then, than there are of us. One example is China. Harper sold us out to China with his FIPA deal. This is for a minimimu of 31 years and locked in, no matter who is PM. Harper's Omnibus-Bull-S-Bill permits China to sue if, anyone tries to block China's takeover. There were 413,000 Chinese in Vancouver alone. 45,000 more were suing to get into BC. That province is pretty much all owned by China. The BC Liberals work for Harper and Harper runs BC, not Ditzy Christy Clark. She campaigned on 100,000 LNG jobs for BC. Big whopper election lie. Nexen of China paid for 800 hectares near Prince Rupert, to build their own LNG plant. Another Asian country, will also build their own plant. There are no jobs, for BC people. Same with Christies thousands of six figure wage mine jobs. Another whopper election lie.

There is also India. Thousands of them are pouring in over here as well, taking our Canadian resource jobs. There are over one million Ukrainians in Canada. There are also the Jewish people. Polish, Poland was given the ship building contract. There are other smaller grous of ethnic voters as well.

We all know Harper will use every dirty tactic in the book to cheat to win, as he has done to win all of his elections. It is very hard to belive Harper isn't in prison, for all of the crimes his henchmen have pulled to cheat for Harper. Companies have now also admitted, they helped Penashue to cheat to win. Sona in prison for the robo-call election fraud. Del Mastro and his cheating. On and on this criminal PM goes and I would like to know why?

"It is very hard to belive Harper isn't in prison, for all of the crimes his henchmen have pulled to cheat for Harper."

To all the Cons who may now be reluctant to do his dirty work.

The only reason Canada didn't have a "meltdown" in 2008/9 was because the federal liberals had ensured we had a safe banking system and done a reasonable job on the economy. Steve the not so great economist has done nothing to improve the economy since he came to office. I'd suggest most Canadians are in worse shape now than they were in the early 2000s. We have only to look at the ever increasing number of bankruptcies by seniors. Not a good thing. there hasn't been a great increase in full time employment for young people, which pay a "living wage" so what has stevie done for the Canadian economy? not much. he has done better by China and their economy.

Stevie didn't understand that for a country to grow they actually have to manufacture something. manufacturing has been going down the toilet for longer than stevie has been in office, but it got worse, since he has come into office. we ought to get out of a lot of these trade deals, especially with countries who do not have the same standard of living as we do.

The Libs or NDP need to steal Ronald Reagan's 1981 campaign question and use it against the Harpercons in attack ads and speeches:

"Are you better off than you were four years ago?"

"Are You Better Off?"
https://www.youtube.com/watch?v=8EvFQLhqWPQ

There are two secrets to political marketing: First, you have to frame the ballot question. That is the overriding question designed to linger in the air when people are in the voting booth. When President Ronald Reagan asked voters in 1981 if they were better off four years ago than there were now, that question lingered in the voting booths like a cologne - and the majority of voters put an X beside his name.

The second thing political campaigns have to do is get out the vote. Very few people are actually undecided, and it's pretty difficult to get voters to switch parties. What often wins elections is the ability to convince your supporters to actually get out and vote.

But the biggest way political advertising differs from product advertising is that a large bulk of it is negative. It bashes the competition. I never liked that strategy, and never enjoyed doing it when asked.

hi UU4077...yes, as others have pointed out, Harper took credit for the actions of others, and had his boat lifted by a rise in oil prices, and other external factors. Which he took credit for, only to blame others when the economy went south...

hi anon...yes, we ca only hope for such a fitting end. What I especially hold against the Cons is their failure to come up with an original idea, and prepare this country for the greener future that is so obviously looming. In short their abominable mediocrity. The sad thing is that they fooled so many for so long, and now we're all going to pay for that...

hi anon...yes the Cons, especially Harper and Jason Kenney have spent an enormous amount of time wooing the ethnic vote. And in the case of the Ukrainian and Jewish vote they have even compromised our foreign policy in order to win votes. It is appalling and is the long list of Con scandals. But if you ask me why they were able to get away with it for so long I don't know the answer. I'm afraid too many people were suckered by their propaganda, and let's be frank were corrupted by their promises. Historians are going to have a hard time explaining what happened. But it was a nightmare and the Cons should never have been allowed to win a majority...

hi e.a.f ...yes you're right, they inherited a surplus and they they were prevented from de-regulating the banking system as Harper once wanted. He has done so many other bad things to our country and our democracy, but his economic record seems to be the only thing that has made Canadians finally wake up. It is deeply disturbing but better late than never...

hi David...I think it's OK to attack the Cons as strongly as possible, but you also have to offer a vision of something better at the same time. I feel that so far we've failed on both counts. Luckily voter fatigue with the Cons is so strong that we might be able to get away with it. But as you point out, getting out the vote is crucial, and will mean the difference between success and disaster....

Harper has turned a 21st century star, into a 18th century indentured servant.