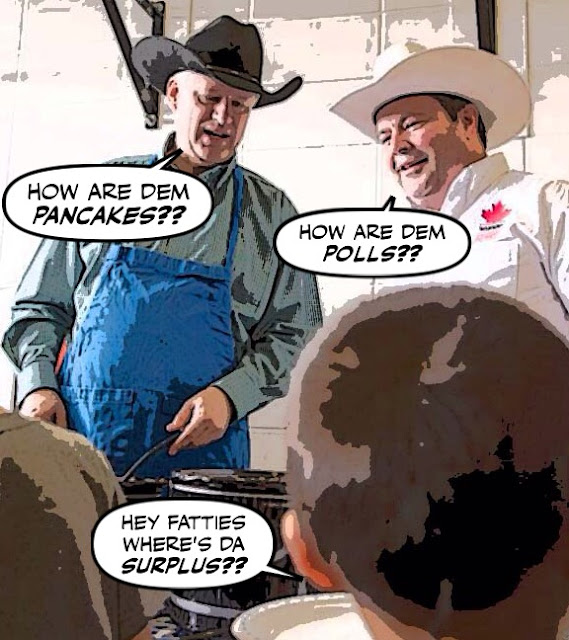 Well he's still out there with his trusty sidekick the rhinestone Cowboy Jason Kenney, trying to put a brave face on the situation.

Still serving pancakes to the faithful, and judging from this photo, no doubt scoffing back a few of them himself.

But it's clear that the stress is getting to him. For it seems that every day brings more bad news, and yesterday was no exception. 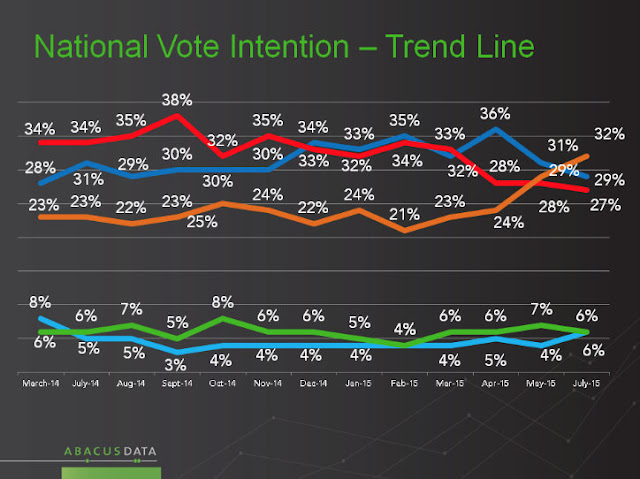 For while this one by Abacus shows that it's still a tight race.

Harper's Cons are still trending downwards, and approaching their lowest level of support since the Second World War.

While the NDP is still climbing, and to make matters worse stealing some of their voters.

The NDP is currently competitive among segments of the population where they have lagged in the past, including among men, older voters, and homeowners.

And this new Nanos poll is more bad news. 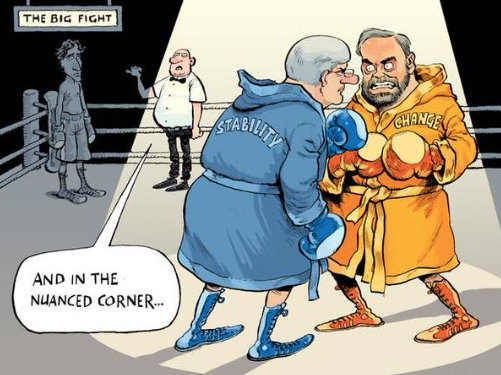 The NDP is seen as the party that offers the best-defined alternative to the Conservative government before an election in which Canadians will be asked to choose between political stability and renewal, a Globe and Mail/Nanos Research poll has found.

Fifty-two per cent of respondents said the NDP “represents the clearest change from the current Stephen Harper government.” The Liberal Party was far behind at 19 per cent, with the Green Party at 10 per cent.

Not just because at a time when the desire for change is so strong Mulcair now has the wind in his sails. But also because the more progressives flock to one candidate the less the chance they will split the vote.

And as for wearing the word MR STABILITY on his back, Harper can forget about that, now that the economy is either in, or teetering on the verge of a recession.

And he's teetering on the verge of being called MR DEFICIT.

For while as I pointed out yesterday, him and his hapless stooge Joe Oliver are still claiming that they did balance the budget, and will still deliver a surplus... 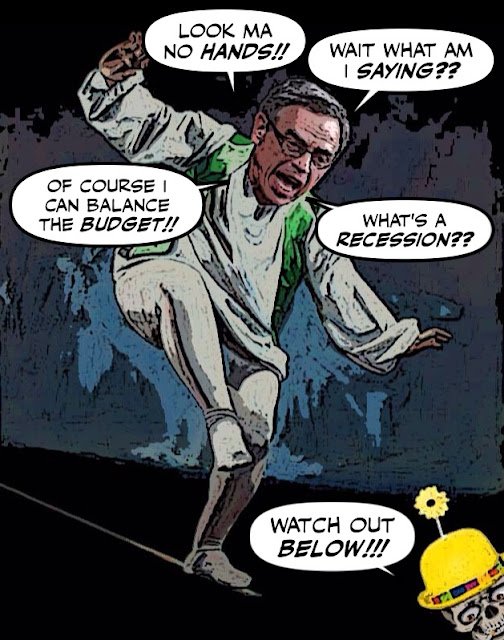 Their own budget documents make them look like fools or Con artists.

Joe Oliver insists that Canada’s economic downturn (just try to get him to say “recession”) hasn’t derailed his plans for a budget surplus this fiscal year. His own budget suggests otherwise.

The budget’s financial calculations were based on the average private-sector forecast of 2-per-cent growth in gross domestic product. With GDP having declined in the first quarter, and a growing number of private-sector economists now saying it probably shrank again in the second quarter, the economy will have to do more than simply reverse that in the second half of the year to meet that budget assumption. It will have to be positively booming – something in the order of a 4-per-cent annualized pace.

Make their shiny budget surplus look more like a mirage... 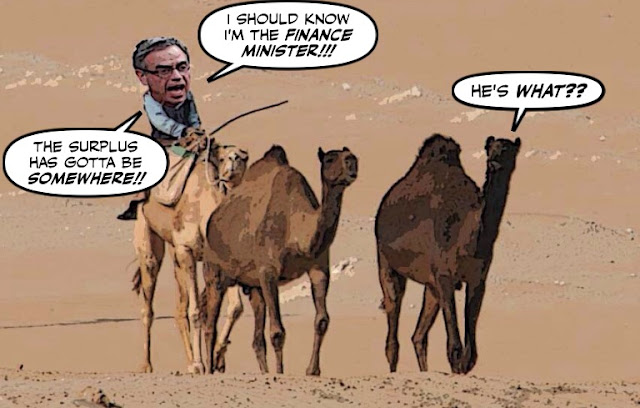 What would growth a full percentage point below the budget assumption do to Ottawa’s finances? Well, conveniently, the budget documents tell us that, too. In a section outlining the “sensitivities” of the budget estimates to changes in key underlying economic conditions, the government estimated that a one-percentage-point drop in real GDP growth would translate to a $4.1-billion hit to the budget.

That would eat up not only the $1.4-billion projected surplus but also the $1-billion set aside for “contingencies,” with room to spare. Unless the second half of the year is much better than almost anyone expects, the government’s own calculations suggest that this surplus is well on its way to becoming a deficit.

And of course make Harper and Oliver look like idiots... 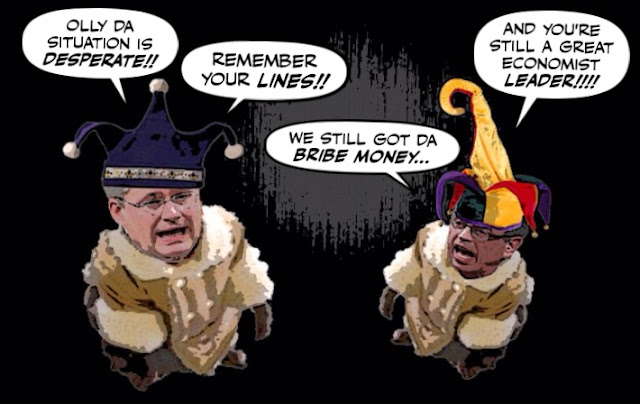 Who as Michael Harris helpfully suggests, should hire a comedian to write their speeches.

Oh boy. Isn't it nice to know with the election now only 100 days away, that Stephen Harper must be desperate?

Staring into the mirror of his future.

And not liking what he's seeing or hearing.... 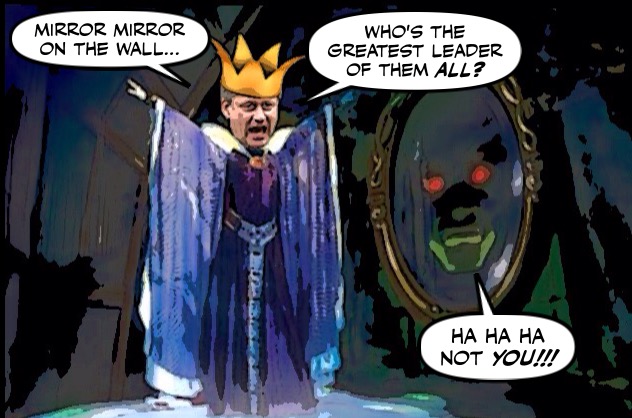 You know when so many Canadians hate Stephen Harper and his foul regime, it's bad enough.

But when they start laughing at them, while clutching their wallets.

You know it's almost over...

It certainly doesn't surprise me that the staid and mostly conservative people of Canada view Mulcair as the viable alternative to Harper. Old, fat, grumpy, silver-tongued, talking point addled. A one-man show leadership style that will likely be little different than that of the one it would replace. But whatever. The NDP could never win doing it by being, you know, to the left and actually progressive so I suppose a shift to the centre-right with a leader like Thomas Mulcair was inevitable. Will they become the new naturally governing party? My bet is they'll get one term just like the NDP here in Nova Scotia did. And *that* will not be much to write home about.

ps ...have at me NDP partisans lol

The Franklin Expedition is a metaphor for the Harper Goverment, with the exception their Arctic ice floe is melting.

I'm planning to compile a list of reasons to vote Conservative. Can you assist with more reasons?

2. you don't think Canada's waterways should be protected

3. you think muzzling of Canadian scientists and gutting of research libraries is a good thing

hi Omar... when I read your comment this image flashed into my mind. There you were running into an empty bullring waving a big red flag, when suddenly the gate opened, and out bounced a big black lab ;)
There aren't too many fierce partisans who drop by here. Most of them belong to the Anyone But Harper party, and like me only want to liberate this country. But you never know you might be lucky, and needless to say partisans like you are always welcome here...

hi Steve...yes, I remember how he said during the search that he hoped to find Franklin still clutching the wheel. One can only hope that he will one day be found in the same position... ;)

Hi David....I certainly will. However due to the length of the list, and prevailing summer conditions, that might take a while... ;)

more bad news for the Cons. Last evening the news reported there seems to be a bit of a difference of opinion in the military on such things as sexual assault, harassment, rape, etc. Now who did appoint Lawson? Who kept him on this long? Then there was that lovely piece about some newspaper firing a reporter who "dared" to want to report some news which might have been at odds with the Stevie adventure tour of the artic.

Oh, those cons are looking ever so good.

p.s. loved the picture of Joe in the desert with his camels"!

10 reasons why Stephen Harper is the one who is too "risky" for Canada
http://www.pressprogress.ca/10_reasons_why_stephen_harper_is_the_one_who_is_too_risky_for_canada

I'm not at all partisan. What I am is someone who has changed his mind about Tom Mulcair. But that's ok because you never know, I may change my mind again. ;-)

4. You think agreements allowing foreign investors and corporation to sue Canada over laws they don't like is a good idea (ie CETA, China-FIPA, TPP, etc).

hi Omar....oh you think you can get off THAT easy. Forget it, I'm ordering that vicious lab to lick you to death... ;)

hi e.a.f...yes that story on the Franklin expedition should be icing on the cake. I've been doing quite a bit of research on that story. And it all boils down to this: One of Harper's friends, and his flunkies at Parks Canada contrived to make it look like Harper played a big role in the expedition. And hid the news of the discovery so Great Leader could announce it himself and insert himself into the centre of the story. And of course all of this gigantic photo-op was paid for with OUR money....

hi e.a.f...I'm glad you liked it. I have had little time to make graphics, so I have been digging into my archives....

[snip]
Will Canadians in enough numbers actually call Harper’s bluff in October and demand, instead of his phony security against unlikely terrorist attacks, the economic security that Harper’s policies are destroying? We can how hope that will be the case as the reckless policy of balanced budgets in the midst of recession will savage the economy by October’s election day.

The Greek/EU stand-off should highlight the actual struggle behind the debt crisis. This is not primarily about numbers and assigning blame — it is about nation-building versus globalization, democracy versus austerity and general prosperity versus crushing inequality.