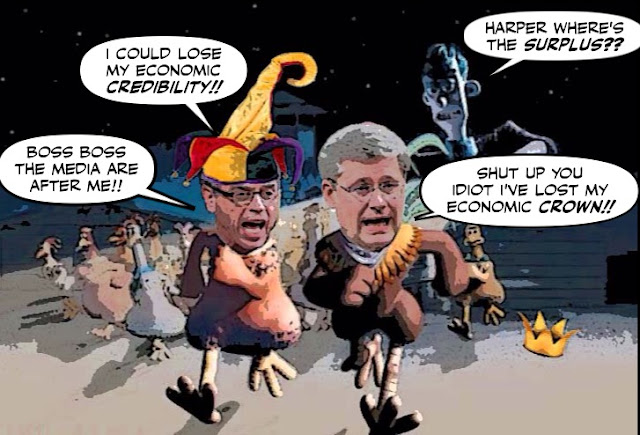 The other day I ran a video of Joe Oliver literally running for cover, so he didn't have to answer questions from reporters about the state of the economy.

And now I'm sorry to report that Oily Joe is STILL running, so is Stephen Harper.

And the Cons are trying their best to make sure they never have to answer that burning question.

A Conservative-dominated parliamentary committee voted against a process Monday that would have likely called on Finance Minister Joe Oliver to testify in public about the state of Canada's finances amid a troubled economy.

Before Monday's closed-door meeting, opposition members of the finance committee had been urging the Harper government to study a recent report that said Ottawa was on track to run a budget deficit this year.

But then who blame them?

When the Con ship has had an unfortunate collision with reality... 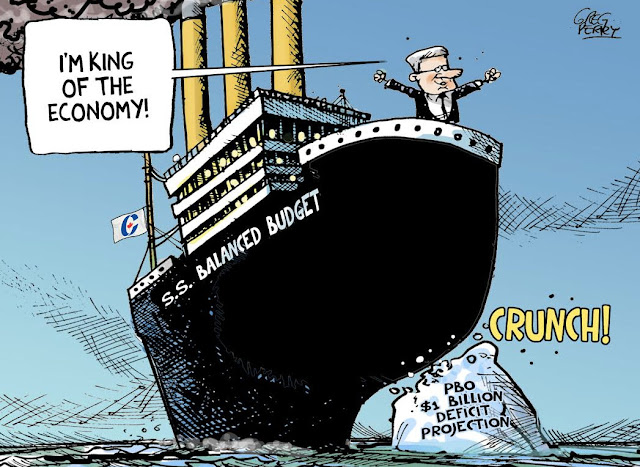 And is sinking along with the price of oil.

The loonie is nosediving... 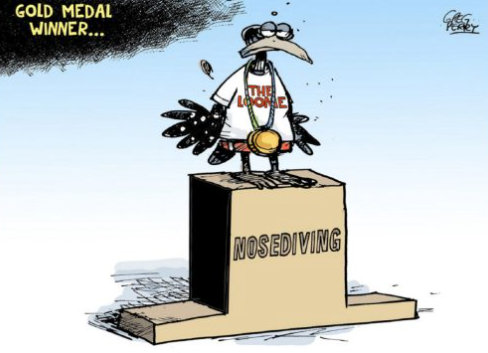 The stock market is tanking... 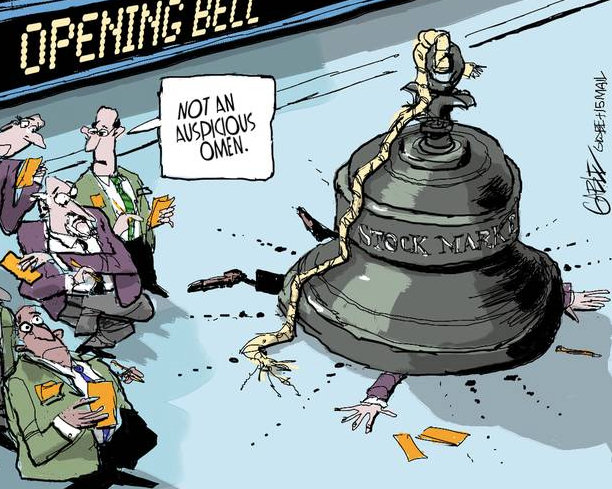 Or having its bell rung.

But still Oliver and Harper are in a state of denial... 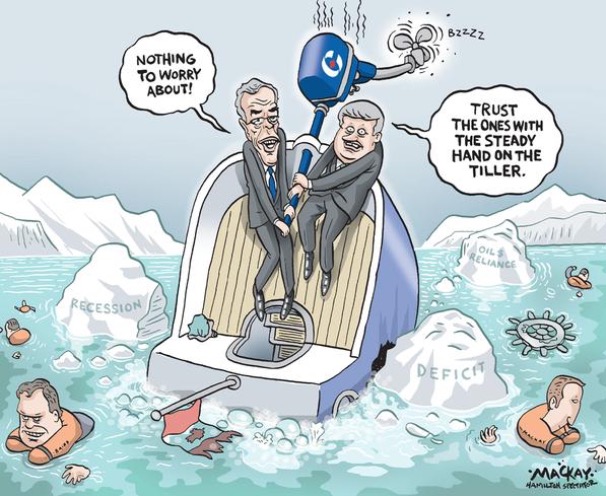 Last week, Prime Minister Stephen Harper said his government was "well ahead" of its own forecast for a balanced budget this year — despite Canada's economic struggles to start 2015.

And the good news? Canadians have finally noticed that throbbing pain in their wallets.

And they no longer think Stephen Harper is a Great Economist Leader.

A Globe and Mail/Nanos Research poll asked 1,000 Canadians last week how the election of each of the three main party leaders would affect the economy. And 47 per cent said a Mulcair victory would have a “positive” or “somewhat positive” impact. That was well ahead of Conservative Prime Minister Stephen Harper’s 31.7-per-cent positive result. Liberal Leader Justin Trudeau garnered 41.4 per cent.

Which of course couldn't be more devastating for Stephen Harper's chances of winning the next election. For his phony economic credentials were the only thing he had going for him. And now he's got NOTHING.

He can deny reality, he can lie like a thief, or a Con artist.

But the king has lost his cardboard crown.

He led the economy into a black hole, and now he's going down with it... 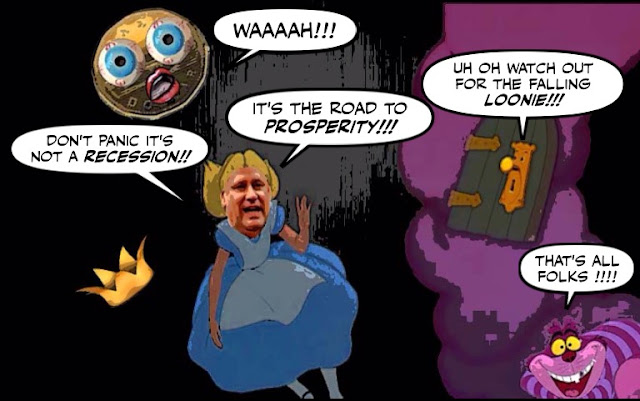 The economy helped build him up.

And now it will help destroy him...

Simom I hope for one of your eviserations about CISIS and the madman at the helm. Spying on Obama, is he nuts.

Hey stacked Senate: Thanks for the new crown.

some of the financial news is not exactly looking good for Canada right now. If oil falls lower, then there goes the neighborhood.

The Americans maybe raising their interest rates in the next 12 months, while Canada just lowered theirs. That does not bode well for Canada. even Canadians will move their money south for higher interest rates.

Housing costs in Canada a high but if the Chinese economy tanks, some areas in Canada will be in real trouble. In Greater Vancouver, houses start at a million, and even if lots are owned by off shore interests, lots of Canadians who live in their homes will be stuck with houses which won't be worth what they paid for them. Many might just walk away. We will look like many American cities did when their housing bubble burst.

Steve spent too much on linking our economy to tar/oil and China. A country which does not manufacture things does not grow. In B.C. the forest industry has tanked and the income is half of what it was in the 1990s but the amount of logs leaving the country has just about doubled. There are few value added jobs. The LNG jobs which her photo opess keeps talking about, just aren't going to be there. Most will most likely go to off shore workers because when Steve and his Cons terminated the TFW program then brought in others which permits "trained trades" people to come into Canada within 10 days of the employer requesting them. So much for jobs, jobs, jobs.

People may see Mulcair as a better leader because if the economy tanks, they hope the NDP will provide a social safety net, something they know Steve and is Cons won't. For federal Liberals, they too would provide better safety net than Steve. It was Trudeau Sr. who gave this country the closest thing to a guaranteed income back in the 1970s. when he introduced the U.I. Act of 1971. It provided benefits which kept more than one community going and forcing people on to welfare when they lost their jobs. The Green Party would have better plans than the Cons when it comes to Canadians and income. Steve and his cons didn't provide better jobs for Canadians these past 10 yrs People need to ask themselves are the better off now or under the the federal Liberals? or will they be better off with the NDP or Greens. ABC

Storm TV Ad | The Harper Conservatives won't be there for you
https://www.youtube.com/watch?v=7ettqrDjWDQ

hi Steve...I'm waiting for more details before I write anything on that one. Although some of the revelations are already astounding...

hi anon...yes I'm sure Harper is looking for a new crown or a new helmet. But he is running out of time, his government is a mess, and with the state of the economy his horoscope or should I say horrorscope couldn't look more bleak...

hi e.a.f. ...as you now I have always been a member of the ABC Party. I have friends in both the NDP and Liberals ranks, and I like them a lot. But right now the situation is too desperate not to put country before party...