Does Stephen Harper Have a Plan To Ruin Our Summer? 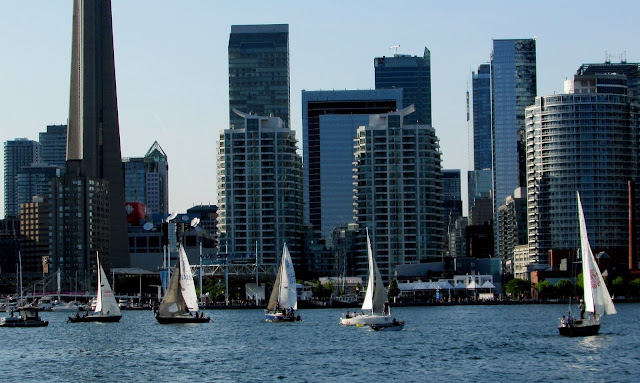 I've been trying to soak up every precious minute of summer I can. Trying to escape the city by heading out on the lake, to feel the wind in my face or the sun beating down on me.

Or just lying in my hammock, with my cell phone turned off, reading a book, or watching the flowers bloom... 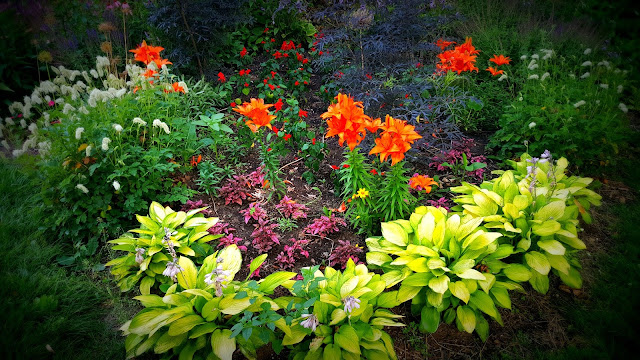 Not just because the summer took a long time to arrive, or because our Canadian summers are so tragically short.

But because for weeks I've been hearing rumours that Stephen Harper has a monstrous plan to make this one even shorter.

A plan, that as John Ivison reports, he hopes will cripple the opposition.

Fixed election dates may have taken the uncertainty out of polling day but we are still none the wiser about when the 42nd Canadian general election will formally commence. This is important because there are indications that the Conservatives will drop the writ early in an attempt to drain the resources of their relatively impoverished opponents.

By firing the starting gun for the official start of the election sometime in August rather than mid-September. And making the campaign longer so the Cons can take full advantage of their bigger war chest.

The typical 36-day campaign would limit the amount parties are able to spend to $24-million — a level of expenditure the three main parties can afford with a degree of comfort. But every day the campaign is extended, that limit is raised by $676,000.

The Liberals and New Democrats are in something of a funk because they are hearing rumours that Prime Minister Stephen Harper will visit the governor general on Aug. 9, which would raise spending limits to $45-million. Conservative MPs say they are betting the call comes closer to Aug. 20, which would raise limits to around $40-million.

And can bombard us with ads from their massive propaganda machine, while the progressive parties are forced to hold their fire... 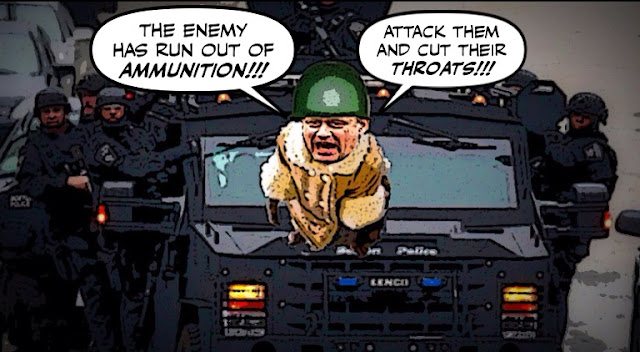 “They’re trying to bankrupt the other parties,” said one senior Liberal. “The first month of the campaign will exist only in advertising — which is exactly how they’d like it.”

But while the idea of leaving my boat or my hammock to help organize in my riding a month earlier than expected is a shocking one. I think that Ivison overestimates the impact Harper's move could have on the outcome of the election, for at least two good reasons:

(1) The Con propaganda machine has been bombarding us with so many ads for so long, polls show many Canadians have come to resent them, or learned to ignore them.

So stepping up that bombardment until it's impossible to ignore them, could backfire badly... 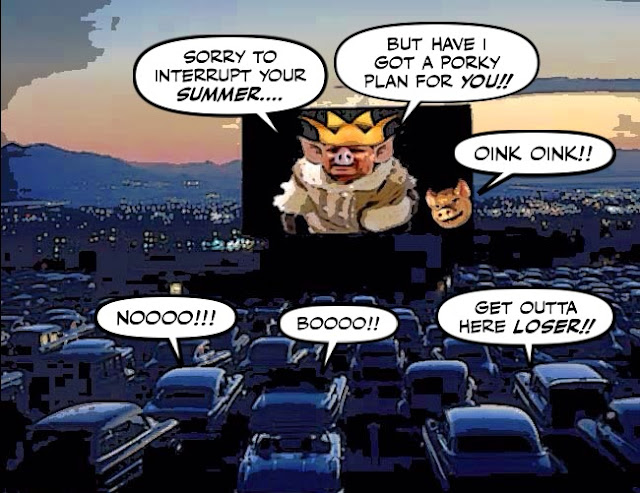 And make many hate the Cons even more than they already do.

(2) This election will be fought on social media more than any other election has ever been in the past. And in a country which has the highest rates of internet use in the world.

Canadians are among the biggest online addicts in the world, visiting more sites and spending more time on the internet than anyone else in the world, according to comScore Canada.

On that front at least, progressives have a clear advantage.

We are more than them, we are better and more creative. So we can neutralize their financial advantage with good old people power.

And use social media to attack the Cons like they have never been attacked before... 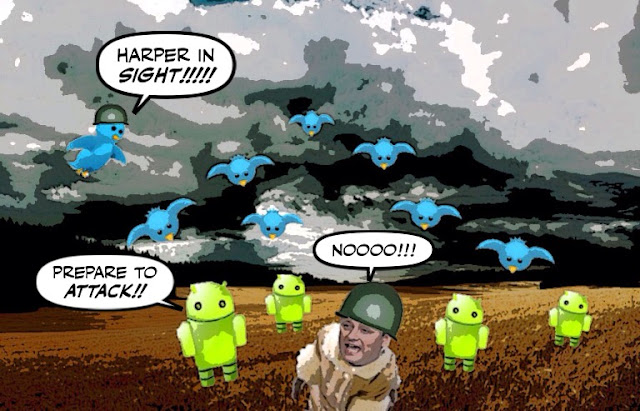 Finally, there's that other more intangible factor, but one that could turn out to be Stephen Harper's biggest mistake.

By calling an election in August rather than September, at a time when most Canadians are more interested in barbecues than politics, he will be seen by many to have ruined what's left of that tragically short Canadian summer. 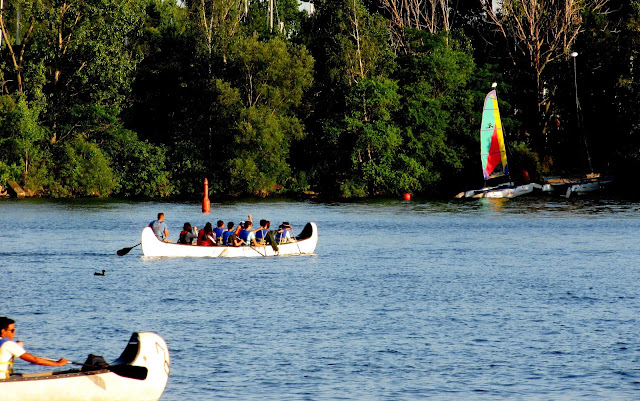 And if we constantly remind Canadians that he did it for crass political purposes he will be made to pay for it.

Yup. Enjoy your summer, rest up for the battle ahead.

The dictator and his ghastly gang think that money is everything.

But we are going to teach them a lesson they will never forget...

My response to Con attack ads on television is to turn off the tv or switch to another channel for the duration of the ad block which also penalizes other advertisers. A "switch off" campaign involving only 10 to 20% of the viewers could have a significant impact on ad revenue as none of the other advertisers would want to run ads in the same time slot as the con ads. A Con backlash targeting ads by other parties would only help kill all attack ads which would be a good thing. We could do the same thing for newspapers, one attack add today means no paper purchased tomorrow. We have the power in a closely monitored commercial world where a few percentage points means the difference between success and failure. Money equals power is a core element of their value system and they are terrified of commercial protests which is the reason they view the Israeli commercial boycott as a hate crime and insist on maintaining sanctions against Iraq while our allies are moving to eliminate them. Cons can deal with street protests as they further polarize the public but commercial protests are a completely different matter.
RT

Simon: We do not know whether there is any truth as to whether the GG will have a visitation from Jesus (not the real one but the CPC version) on Aug. 9, but have you ever wondered how Ivison seems to be privy to so many "leaks" (or should we call them "visions" ?) from the Cons?

And you must have noticed that many of his "visions" later turn out to be apparently only his overworked imaginations. Just one example relevant to the topic today: recall that earlier this year, Ivison had told us that Harper would be calling an early Spring election. There were even a few who then jumped on the bandwagon and confirmed that they had heard the same thing too.

The most obvious explanation for Ivison's stories is that they are trial balloons being set up by the Cons machine. The former would suggest that Ivison, the Con friendly journalist, is either genuinely unaware that he is being made use of (alright, you can stop laughing now and read what I really think), or, more likely in my opinion, is helping to create a situation that will benefit his apparent masters. Why? Perhaps he wants to be Senator Ivison, eh?

As you pointed out, if it does turn out that Ivison spoke the truth this time, it could well backfire. Especially when Alice Funke, who admitted to once working in the office down the hall from CPCJesus (a former CPCJesus disciple?), is calling an extended writ period with the intention of bankrupting the opposition finances as "cowardly", you can see why I think Ivison was given the mission of setting off the trial balloon, eh?

Meant Iran not Iraq which is a mess of a different colour.
Rt

A visit with my friendly google ( not to be confused with a friendly poodle ) reveals the numbers of candidates nominated by the big 3. The liberals have nominated the most and the NDP the least . The reformatories have yet to name candidates in 83 ridings ~ 20%.

When is the cutoff date for nominations? I searched online and couldn't find it. In my riding of West Nova neither the NDP or Conservatives have nominated candidates.

hi RT....That's an interesting proposal. There should be some way to let the TV stations know what we think of those Con ads. But I'm sure some Canadians are already doing that. I know that as soon as any Con ad comes on I practically fly through the air to get my hands on the remote control and change the channel. And as I have pointed out before, polls show most Canadians are sick of them, so every time they run one they only do themselves more damage...

hi anon...you're right, John Ivison is far too Con friendly, that's why the PMO uses him to leak the stories they want leaked. And you're right, the fact that they are feeding him this stuff tells us that it is a trial balloon. So they are at least thinking of calling an early election. As they were thinking of calling an early election in the Spring, but chickened out at the last moment, and no doubt deeply regret that now.
And yes I think what Alice Funke says does bear repeating, over and over again...

hi rumleyfips...that's a good point. I thought the Cons had nominated more than that, and if we see them in a wild rush in the next few weeks we'll know that an election call is imminent...

They take their army of trolls and go see what is brewing on social media after Ivison unleashed his 'story' and then plot some more depending how they read it.