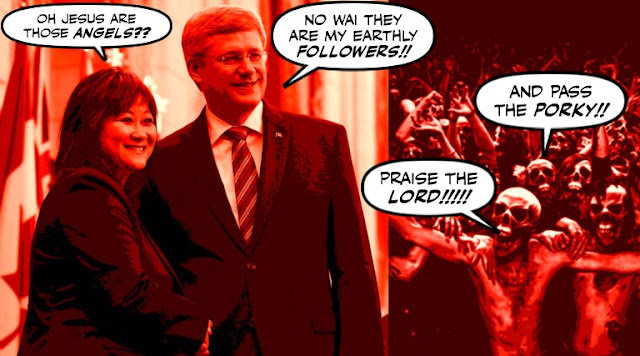 When I first read the story about the Con MP who compared Stephen Harper to Jesus I must admit I was greatly amused.

As were so many others.

I wondered whether Wai Young was a religious fanatic, and whether she really believed what she was saying.

Or was just trying to please Jesus Harper.

The deranged leader of the Con cult. 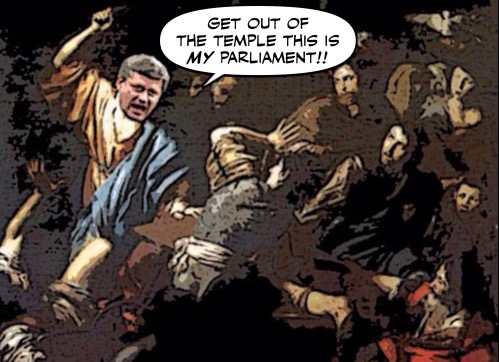 But then I read what she had to say about the Air India bombing, and suddenly it wasn't so funny.

Because then I really had to wonder whether she was out of her mind...

Or whether, since she can't get her facts straight, and she doesn't read newspapers, she is just really, really ignorant. 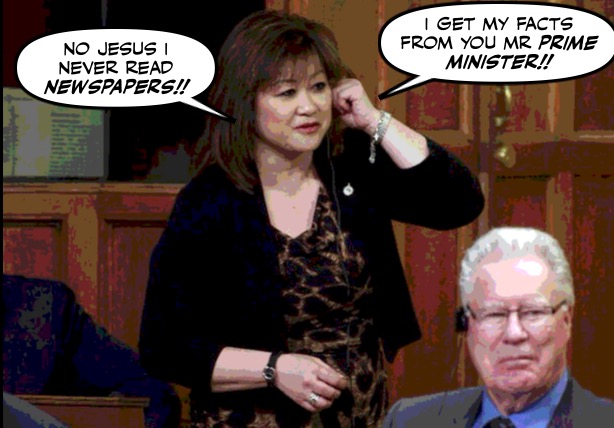 But then I read this story.

And realized that Wai Young was just another grubby Con trying to buy the election with OUR money.

Here they come! Millions of cheques for every family with a kid will be arriving in mailboxes across the country in just seven days. The money is from the Government of Canada or, as that government likes to call itself, the Harper Government.

Because that's what it is and it couldn't be more blatant.

And here’s the real beauty of it, if you’re a Conservative supporter. Parents have been earning these cheques since January 1. But for whatever reason, the Harper Government decided not to issue the first cheques until now. So, just in time for summer vacations for every parent in the country, here comes a whopper of a cheque totalling six months worth of benefits.

And that's when it hit me, that we're really in trouble.

Because what we're dealing with here isn't just the cult of Jesus Harper.

A man growing more desperate by the day... 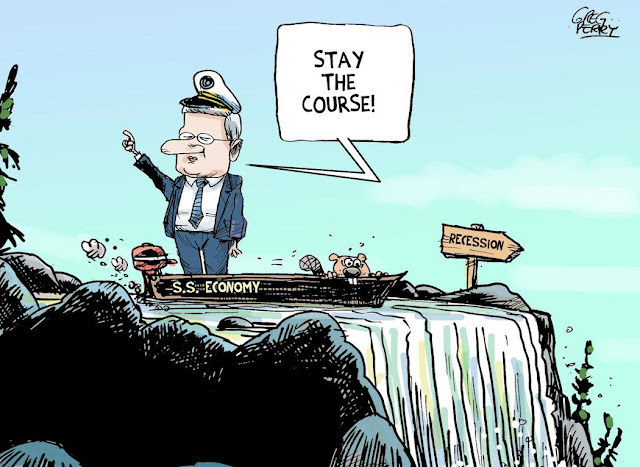 It's a criminal conspiracy...


Or as I tweeted myself, a cult crossed with a mob...


Now I know why the Cons are always saying our Godfather who art in heaven http://t.co/Z0wzLtQJ4T #CPCJesus #cdnpoli pic.twitter.com/gje9f1LsrK
— Simon (@montrealsimon) July 15, 2015


Who will do ANYTHING to win or steal the election.

And all I can say is we have been warned. We can harbour no illusions.

And either we destroy that satanic cult and their depraved leader. 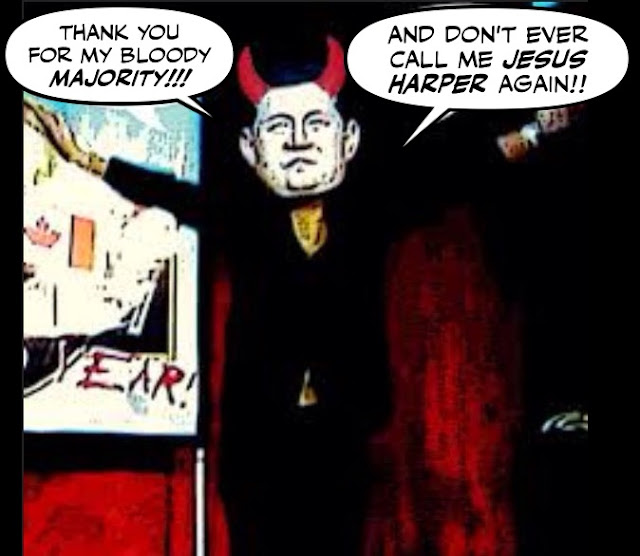 And the good news? We are going to have so much fun with Jesus/Satan Harper.

That when the election or the Day of Deliverance finally arrives.

We shall bury them all in the hell of their own making...

Why do reporters continue to use the word "Tory" to describe people such as Wai Young? The word "Tory" used to refer to more moderate and progressive Conservatives, such as ex-senator Hugh Segal and former PM Joe Clark.

Of course she back-tracks, the damage is done and the base pandered to. Now the soundbite is out and that's what people hear, not her saying she "misspoke" or whatever, the whole thing is quite intentional. Lie, then apologise; easier to beg forgiveness than ask permission. It's the selfish, brutish, way of Conservative politics.

And yes, the Tory thing bothers me as well. The Tories are dead in Canada and the UK, it is a political perspective that lays in the past. What we have now need a different term (perhaps Cons, Liars, Assholes...). Current Conservatives are not conservative at all - they are neo-liberal autocrats and oligarchs with a fetish for fascism.

Wai Young, at one time was neither stupid nor ignorant or particularly religious. My conclusion would be she said all of what she did to impress voters and to ensure she is re-elected along with her "glorious leader" deceiving Stephen.

What she really came off looking was ignorant.

hi David...I agree completely for me the word Tory died the day the Reform Party took over the Progressive Conservative Party...

hi e.a.f...since I've only heard the tape I don't know if she was winging it, or reading from some PMO songbook. But whatever the case she did end up looking clueless...

Hopefully that is Steve's last supper as PM oh and I see Bev Oda in there like a dirty shirt doing the honors of lighting the doobie...