How the State of the Economy Could Kill the Harper Cons 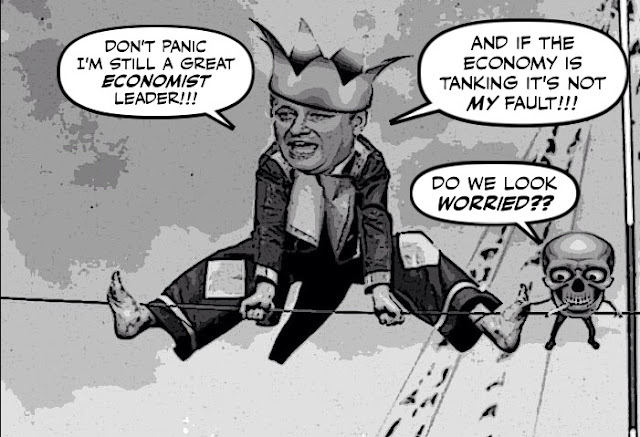 As you know Stephen Harper is now engaged in a delicate balancing act, or caught in a compromising position.

He's trying to claim that when the economy was doing well it was because he's a Great Economist Leader.

But now that it isn't doing well it's not his fault.

But sadly for him it's just not working.

For as even John Ivison points out, by blaming external factors Harper is undermining his own message that it would be too risky to allow the opposition to govern.

Voters might buy the line that the problems with the economy are imported but, consequently, they don’t seem to think things would be any worse under a different shade of government.

Having decoupled the economy from government performance, the Conservatives have, inadvertently, taken the sting out of historic fears of NDP competence. At a time when three in four voters say they are interested in changing the government, that is not good news for a ruling party.

And as Alan Freeman points out that could be fatal.

Recession or not, Stephen Harper has lost the argument on the economy. The consequences for his future as prime minister may be dire.

For seven years, the spin docs at the PMO have been instructing the lobotomized members of the cabinet and caucus to repeat the following message, over and over: The world economy may be in trouble but, thanks to Harper government policy, Canada is doing better than everybody else and you should be thankful.

For not only does his message now ring hollow.

But by claiming that the world economy is dragging Canada down, he is only making it more obvious that it was that economy that lifted Canada's boat, not him.

The reason Canada did better in the last recession than the rest of the world — particularly the U.S. — had little to do with Tory policies. The Liberals had bequeathed them a sound fiscal position and a strong banking system. And then resource prices, particularly oil, bounced back and interest rates dove, fuelling the residential housing boom and real estate bubble in places like Toronto and Vancouver that helped keep the economy humming.

And that whatever Harper and his stumbling bumbling stooge Joe Oliver might claim, their record couldn't be more mediocre... 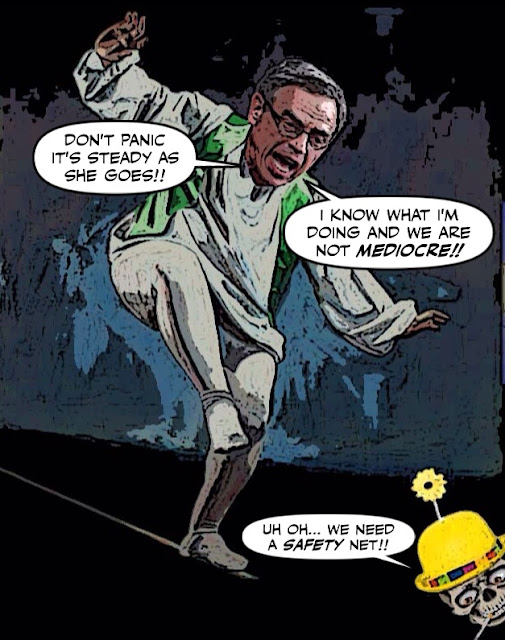 In his July 4 appearance on CBC’s The House, Finance Minister Joe Oliver insisted Canada would not be in recession this year and predicted “solid growth”. He admitted that things weren’t going so well, what with low oil prices and a raft of other factors clearly out of his control. The world economic outlook was mediocre, Oliver conceded, but “we’re an exception to that and we’re going to do better than mediocre.”

But Canada isn’t the lucky outlier any more. Our economy is very mediocre right now — and it shows.

For years Harper was able to fool many Canadians into thinking he was a Great Economist Leader, but not any longer.

What Harper forgot to mention — something Canadians increasingly recognize — is that international factors are what caused the Canadian economy to grow in recent years, just as they’re putting it under stress now. High oil prices — and the strong domestic economic performance that came from them — had nothing at all to do with Stephen Harper. He just happened to be the guy at 24 Sussex at the time.

He may not be so lucky after October 19.

Now he's looking more like a Great Buffoon Leader, or a sleazy crook trying to buy an election.

The federal government has funnelled 83 per cent of the projects under its signature infrastructure fund to Conservative-held ridings, according to an analysis by The Globe and Mail of the announcements made to date.

Which when Canadians find out what he's doing with OUR money, will definitely not improve his chance of winning the next election.

But will make many of them even more determined to drive him and his criminal posse from office. And if possible send them to prison.

Yup. He rode the economy to victory in one election after the other. But now that it's in for a hard landing.

So is Stephen Harper... 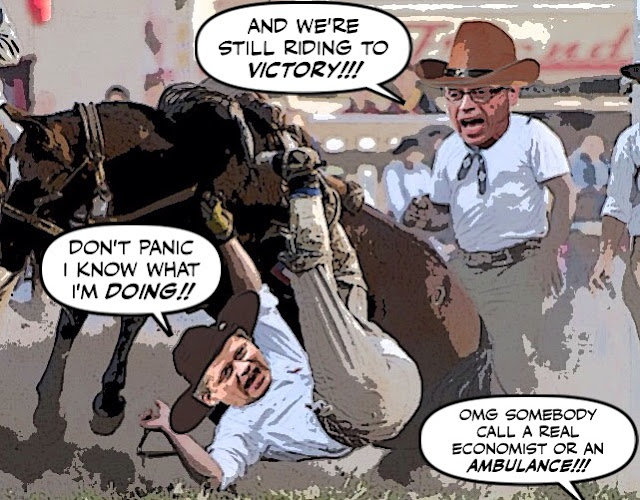 He will be exposed as a fraud, or a Con artist.

I'm surprised the Globe & Mail would make that analysis public, since I thought they are cozy with Harper and only pretend to be an objective paper. At least with the Toronto Star you realize they want the Cons gone. Can you imagine if the Globe & Mail, and even the Sun News syndicate eg. Calgary Sun decided to call for an end to the Harper regime in editorials just prior to the election? Could it happen? 8-)

hi David...I can't imagine how the Globe editorial board could ever endorse the Cons again. But knowing them I'm sure they'll find a reason.i.e. Justin is too young, and Tom is too communist... ;)

Harper wanted very much to strip regulations out of the banking industry, regulations that the previous Liberal government strengthened. And then the recession hit, and the reason Canada didn't suffer as badly as the USA was directly due to those regulations, a system which Harper then took credit for, without the slightest appearance of shame. Interestingly though he never made a peep about deregulation afterwards.

When things go well, Harper takes the credit, when things go bad, it's someone else's fault, external global problems that no-one can control. And how can anyone take Oily Joe seriously as a finance minister when he says things like our economy isn't doing well because the price of oil isn't something we can control? No, we can't control that but what we did have a choice on was to NOT put our entire economical system in one greasy basket!

If we can't control the price of oil, tell us, Joe, why our government put the nation's financial security in complete dependence on the resource? How does that make the slightest bit of economical sense and how can the Oily Brothers pretend to be Great Economists?

Harper is not a great economist, not even a mediocre one, but he hides it well enough. Oily Joe, though, is so obviously, grossly, incompetent that it boggles the mind how anyone can take anything he says seriously.

The two of them vacillating between credit and blame and reasons and excuses is practically slapstick comedy, it could be a Punch and Judy puppetshow routine.

I really, really hope that Canadians are not as stupid as the Conservatives think we are and come election time we destroy The Party and show them they are not welcome in Canada.

On Wednesday, Bank of Canada governor Stephen Poloz would NOT say Canada is in a recession, but called it a "mild contraction." Riiiiiiiiight!