The Day Stephen Harper Was Exposed As a Con Artist 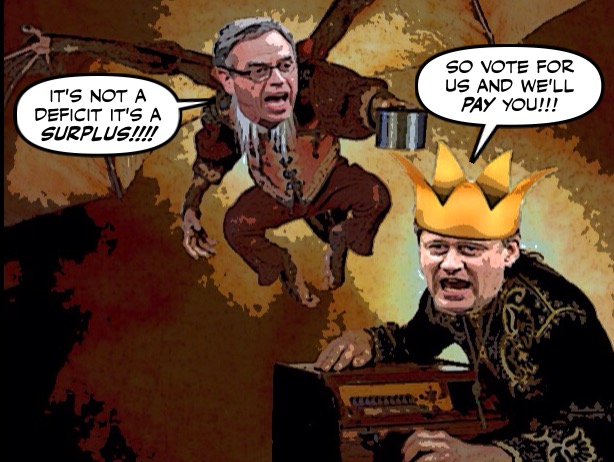 For weeks Stephen Harper and his grubby flying monkey Joe Oliver, have been trying to fool Canadians into thinking that they had balanced the budget for the first time in eight years.

Harper has been travelling around claiming that the economic shock waves that are rocking this country are just a "downturn" not a recession. And that he still has the money to bribe them.

While the senile simian Oliver has been claiming that he has a surplus not a deficit.

But yesterday all those claims came tumbling down, and both men were exposed as shameless Con artists.

The federal Conservatives will fail to accomplish their key promise of balancing Ottawa’s books this year, instead running a $1-billion budget deficit in 2015, the parliamentary budget officer says.

So what did Joe Oliver do when asked by reporters for an explanation?

But then who came blame him eh? 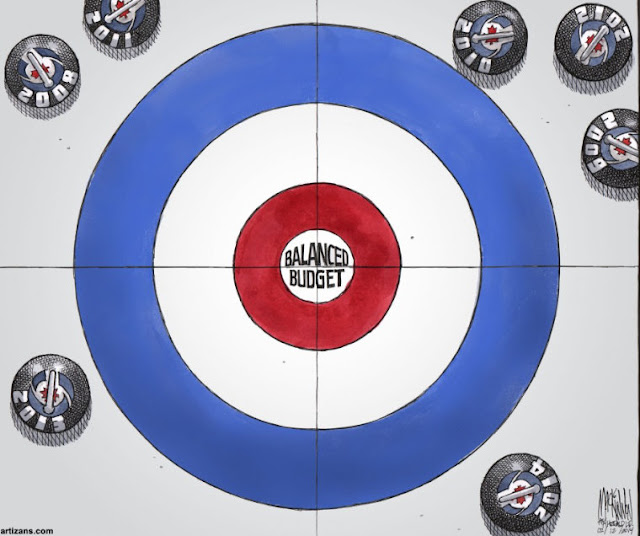 And then of course there is the delicate matter of FRAUD.

The billions of dollars worth of increased support payments for parents and tax breaks for families had been contingent on balancing Ottawa’s books. These goodies were announced last fall by Harper, who said at the time that Ottawa would soon be leaving budget deficits behind.

The Cons promised they wouldn't try to bribe Canadians, or try to buy the election unless they had a surplus. But now that they have a deficit they're still going ahead with their three billion dollar porky child care payments.

Even though that can only make the deficit worse, and as the former Con Brent Rathgeber points out, it is just vote buying.

And the payments are so much less than advertised.

The cheques might appear large — $520 for children under six, $420 for children under 18. But this is not “Christmas in July” for parents. In the last omnibus budget bill, the government eliminated the Child Tax Credit. The new Universal Child Care Benefit is taxable income.

So although you get to cash the cheque before the election, you’ll be taxed on it come April. With the elimination of the Child Tax Credit, a family earning $90,000 per year will only be able to keep an extra $7.50 per month after the tax clawback.

So it's not going to buy them many votes, if any. For even Canadians can't be bribed THAT easily.

And you can imagine what all this is going to do to Stephen Harper's election campaign.

Or his chances of winning the next election.


He must be feeling like an extra in the new movie Sharknado... 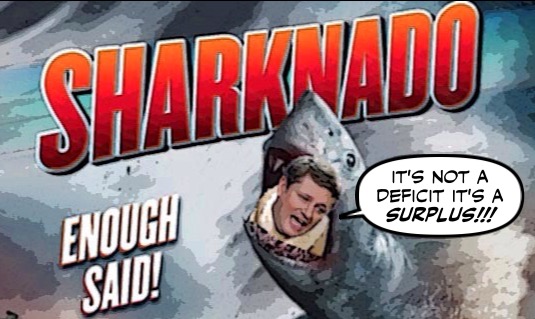 Looking on helplessly, and growing more desperate by the hour, as all his dreams of winning another bloody majority get ripped to pieces.

And of course the Con monkey Joe Oliver must be feeling even worse... 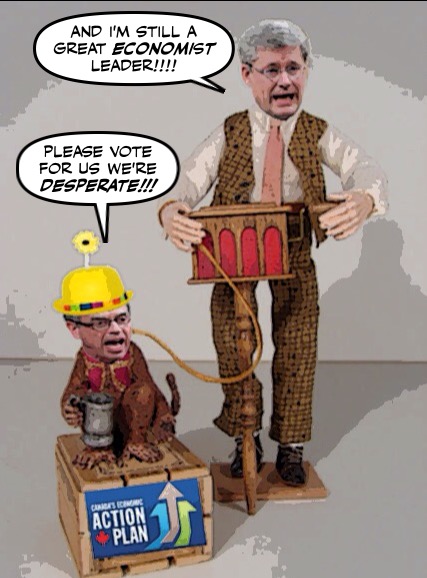 Having been exposed as a hapless stooge, a hopeless incompetent, and a shameless liar.

Let's give them both a round of applause...

And the best part? We're not just going to defeat the Cons, we're going to HUMILIATE them.

By the time we're finished attacking their miserable economic record they'll be screaming like banshees.

It has been a long and hideous nightmare.

Is anyone surprised?!
The only concern I have left about this pathetic party is that something will conveniently happen before the election that will enable them to convince their supporters and unsure voters that they're "keeping us safe."

Recession ? What recession ? Here at Canadian Cosy Closets, business couldn't be better. We have orders for 338 Cosy Closets to be built all across Canada. And all before Labour Day !

Cost is no object . Apparently there's an infrastructure programme for that. We took so many cheques to the bank yesterday that we busted a rear spring in the pickup. The only criteria are that the closets must have dark corners and a inside door lock.

Email us at Canadian Cosy Closets@kissmyass.ca for all your closet needs.

I just got a brown paper envelope with this week's press releases.

CBC is clearly not on the Con's side these days. Guess they did not take kindly to the planned budget cuts and scheme to neuter its journalistic content in favor of the performing arts. Who needs even mildly independent news when the Cons can provide all we need to know. The attached link summarizes what the UN has to say about the Con track record on human rights http://www.msn.com/en-ca/news/canada/un-human-rights-committee-slams-canada-for-record-on-women/ar-AAdngDn
RT

Simon: You mean he was confirmed to be a Con artist, not exposed, eh? :)

Jim Stanford, a real Economist, in his blog today explains, with economic arguments, why he thinks the economy is already in a big funk.

However, what really struck me was the sheer political stupidity of putting all his eggs in the "I have balanced the budget" basket strategy. He could easily have claimed he had balanced the budget last year and justified his giving away our money to his wealthy friends. Would have made Jimbo look good too instead of dying without having really balanced a budget without the rainy day fund of $13B from Paul Martin.

Of course, he and Ollie would now likely still claim they have balanced the budget (Ollie would likely be as good, if not better, in cooking the books than Jimbo did in Ontario), the only problem is that too many people would no longer believe them.

And here is the guy that we have been told was a master strategist, trapping his political opponents by thinking several steps ahead, and then checkmating them. Instead, once again, Great Closet Leader has apparently painted himself into a corner.

Now we can only expect to hear more about his only card left to play, the terrorists' threats: http://www.cbc.ca/news/politics/bureaucrats-told-to-provide-rob-nicholson-3-terrorism-related-statements-a-week-1.3163333 The bureaucrats had better be filling their quotas if they want their Dec. Christmas bonus, eh? :)

For a man his age, Oily Joe sure can hustle when he's run out of bullshit to spew. You can run Joe but you can't hide. As for Stevie, he must be having fits of white hot rage as Rome is crumbling around him. Soon we will be free of this hideous regime and a great weight lifted from us all. Cheers!
JD

Its amazing how fast their attack ads can change. Rather than talk about balanced budgets and the great economic leader versus "Just not ready" they are saying the next economic "Big One" could be just around the corner and you don't want an amateur at the helm. One day thanks to our noble leader everything is rosy to be VERY AFRAID as its a dangerous economic world out there and you don't want to trust an inexperienced yuppie to save us. Wow! Think anyone will notice?
RT

Is Oliver a harpy

Just when you think the Cons can't get any sleazier...

hi Christine...I share that fear. I really do believe the Cons are now so desperate, they are capable of anything. And being in the middle of the Pan Am games and all the security, I'm praying that nothing happens. We will not be safe until we get rid of that filthy regime...

hi Hugh...yes I saw that, and it couldn't be more pathetic. The Cons are still trying to scare people into voting for them, but luckily for us still failing miserably...

hi rumleyfips....yes isn't it the absolute limit? Or absolute insanity. One day people will ask us what was it like to live through the Harper years. And all we'll be able to say is it was so bad, it can't be described. You really had to be there...

hi anon...yes I see the Con Senate has come up with another way to kill the CBC, and try to contribute another wedge issue for the upcoming campaign. And yes, the Cons are still shaming us in the eyes of the world. I think it's safe to say I live for the day we can finally get rid of them...

hi anon...yes you're right, I should have said CONFIRMED as a Con artist. Goodness knows his record in that regard is a long and a foul one. On the other hand many Canadians have somehow either managed to ignore that record, or shrug their shoulders at it. So hopefully now that it's burning a hole in their wallets they will wake up and pay attention. And yes you're right he has painted himself into a corner with his absurd insistence on balancing he budget come hell or high water. And yes all he has left now is the Great Terrorist Menace. It couldn't be more pathetic, and he couldn't be more dangerous...

hi JD....yes I hope you enjoyed that video of Olly running for cover, I sure did. In fact I intend to use it in a video along with the one of Dean del Mastro shuffling along. As for Harper, I keep hearing rumours that he is in one of his blue states that Strangelove Flanagan warned us about. His many trips have apparently exhausted him, and one really has to wonder whether he is still fit to remain in office. Too tired to even fiddle as his Rome goes up in flames. And yes, we are now only about ninety days from what I desperately hope will be the end of this nightmare....

hi RT...yes that is the ultimate outrage or delusion. The one who created the problem is now the only one who can save us from the costly consequences. The MSM has been peddling that absurdity, but I don't think too many Canadians will swallow it. It is outrageous and it is insanity....

hi anon...no a harpy is a female monster with a bird's body and a human face. Oliver is a flying monkey with a bird's brain, and he doesn't have an ounce of humanity in him. I never thought anyone could make poor old Jimbo Flaherty look half human, but Olly has managed the impossible...

If you keep using White on black backgrounds I'm going to stop reading your work... It hurts the eyes... Cause's headaches. Like what I am reading but man stop with the white on black please....

False flag (or black flag) describes covert operations designed to deceive in such a way that the operations appear as though they are being carried out by entities, groups, or nations other than those who actually planned and executed them. Operations carried out during peace-time by civilian organizations, as well as covert government agencies, may by extension be called false flag operations if they seek to hide the real organization behind an operation. Geraint Hughes uses the term to refer to those acts carried out by "military or security force personnel, which are then blamed on terrorists."[1]

Hi anon...I hear you, others have said the same. I will be playing with the template in the next few days...