Donald Trump and the Wonderful Destruction of the Republican Party 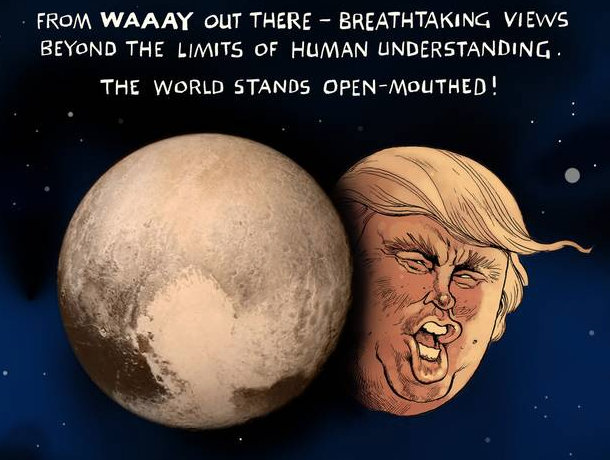 I hope you're enjoying the spectacle of Donald Trump destroying the Republican Party,  because I sure am.

It's better than the pictures from Pluto eh?

Every day it just gets more spectacular.

Every day that Con clown circus just spins more out of control. And now they're ALL freaking out !!!

And today that old southern "gentleman" retaliated like this...

And made himself look as crazy as Trump.

Oh boy. Why did so many cell-phones have to die?

When he could have used The Donald's insult generator.

Because I know it works.

I fed Stephen Harper's name into it and this was the result... 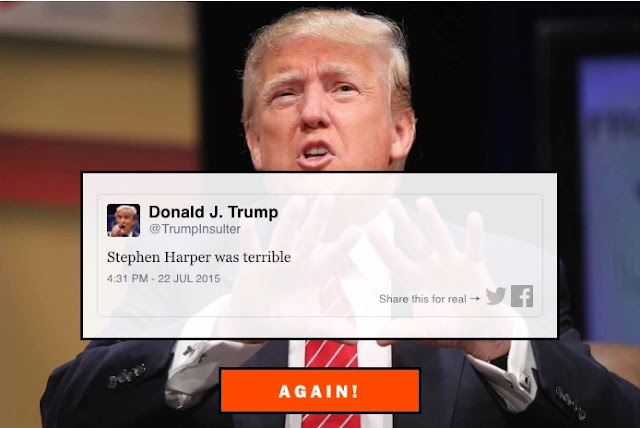 Which reminds me, have you seen how the Harper Cons are destroying themselves?

But believe me it's even funnier.

Con is becoming just another word for desperate LOSER.

And it couldn't be more enjoyable...

Ha ha. I love it when the Right turns on itself, Simon. Mind you, what does the fact that Trump is able to generate all of this publicity say about the state of the media?

Some say Trump is actually a Democrat mole out to destroy the Republican party. If only we had a Trump for Stevie but unfortunately its Canada and we only have the Duff which is a poor imitation at best.... too many ethics ha ha. Its scary that the media has so much power and can be so easily manipulated. Canada is even worse as the major networks also produce the content whereas in the US content production and broadcasting tend to be separate entities. Its a one stop shop in Canada and mostly under Con rule although every once in a while they break out and report that we are actually in recession or the government will claw back a significant amount of the child tax benefits in income tax and elimination of the day care supplement. Possibly they sense the winds of change and are getting ready to jump ship but they will have to swim as all the life boats are filled with Cons going home to spend more time with their families or jail which ever comes first.
Rt

hi Lorne...yes it is a wonderful spectacle isn't it? As for Trump I don't blame the media for covering him, he is hard to ignore. But what is disturbing is that such a low creature should do so well in Republican polls. I can only blame it on racism. But the good news is that even in the unlikely case that he wins there nomination, he will take the GOP nowhere. It;s becoming the party of angry mostly old white people, and every demographic is working against it....

hi RT...I don't think Trump is a Democratic mole, but he might as well be for the way he is throwing the Reublicans into chaos. As I told Lorne I think he's coasting on a racist wave, as well as profiting from the celebrity culture that corrupts all our lives in North America. As for our situation here, I still think that the desire for change will prove to be Harper's undoing. I think a lot of things that are happening are mere distractions, and the underlying forces are working against him, The fact that so many people are looking at the NDP for the first time ever only reinforces that. Whichever Progressive candidate looks more likely to defeat Harper will be the one that garners the most support. When Justin looked like that candidate his numbers ballooned, and now that Mulcair is head I wouldn't be surprised to see his balloon as well. At least that's how it works in my province of Quebec. The orange wave only happened when Quebecers realized that Ignatieff was heading for disaster, and in that province it will probably happen again, because like me, most Quebecers despise the Cons and will vote for anyone who can defeat them...

All I can say is "That Hair" Enough said LOL

His hairpiece is way more flamboyant than harpers