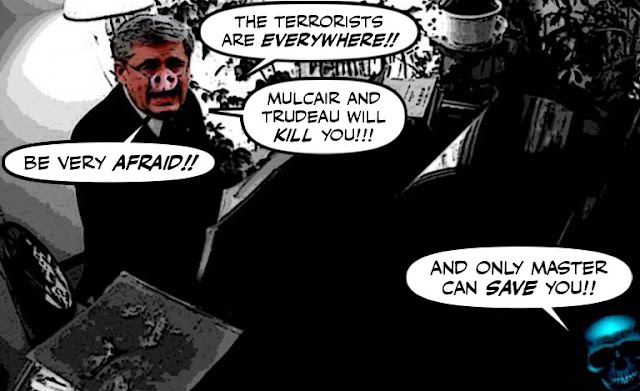 The other night I wrote about Stephen Harper's disgusting attack on Tom Mulcair and Justin Trudeau at a Con BBQ at the Calgary Stampede.

Where he accused both leaders of being terrorist stooges, claimed they were out of it, that we were all in terrible danger of being beheaded in our beds or drowned in cages. And that only he could save us.

Which needless to say was simply appalling, and made me question his sanity again. And whether he's still fit to remain in office.

But what I didn't know was that ghastly performance was followed by another.

For shortly after finishing that foaming diatribe, and no doubt after attacking the buffet table like he dreams of attacking Putin, he sat down at the keyboards and started wailing away.

With Harper on piano and vocals, the band, whose name is a play on the French vingt-quatre, as in 24 Sussex Drive, played three songs with the media present: The Monkees’ “I’m a Believer,” Neil Diamond’s “Sweet Caroline” and Johnny Cash’s “Jackson,” where he duetted with drummer Mary Gellner. As reporters left, Harper could be heard singing Elvis Presley’s “I Can’t help Falling in Love with You.”

And as one who has followed his "musical" career closely, and has made a couple of videos mocking it, I was struck by how melancholic Stephen Harper appeared...

As if he was feeling sorry for himself, or remembering better days.

And I thought that of all those songs, appropriately enough, the Monkeys Monkees song I'm a Believer seemed particularly poignant.

I thought love was only true in fairy tales
Meant for someone else, but not for me.
Love was out to get me
That's the way it seemed
Disappointment haunted all my dreams.

Because it seemed to sum up his life. His lonely teenage years when he spent so much time brooding, and planning his takeover of Canada, or whatever... 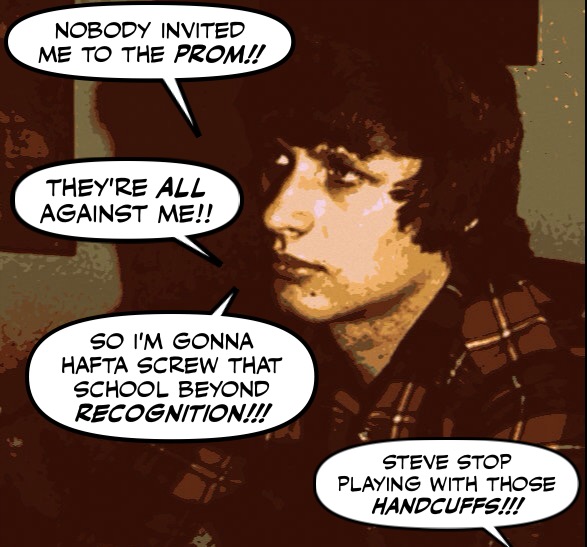 The paranoia and the feeling that even love was out to get him. As well as all his other enemies real or imagined. And of course, his present disappointment.

The brutal psychological blow that Alberta is now orange not blue. And no doubt the sinking feeling that the West isn't HIS anymore. The NDP is threatening to take seats away from him in BC, and even a few in Alberta.

Which as David Akin points out, could be absolutely fatal.

Now no one is predicting that the West is about to be swamped by an Orange Wave — or, for that matter, a Red Tide. This is still solid blue territory. The vast stretch of Canada from southeastern Manitoba to British Columbia’s most northwestern corner was represented in the last House of Commons by 92 ridings, 70 of which were held by Conservatives.

But Harper’s 2011 majority win was built not by simply winning western seats, it was built on being absolutely dominant west of Ontario. Because of Conservative weakness east of Ontario, in Quebec and Atlantic Canada, Harper’s party risks losing government, let alone its majority, if it cannot repeat its dominant performance in Western Canada.

And since this kind of news isn't going to help him in Alberta.

Or improve his sagging reputation as a Great Economist Leader in the rest of Canada.

And this cloud of smoke from burning forest fires which has been turning the sky red in places like Vancouver, isn't going to help him in British Columbia... 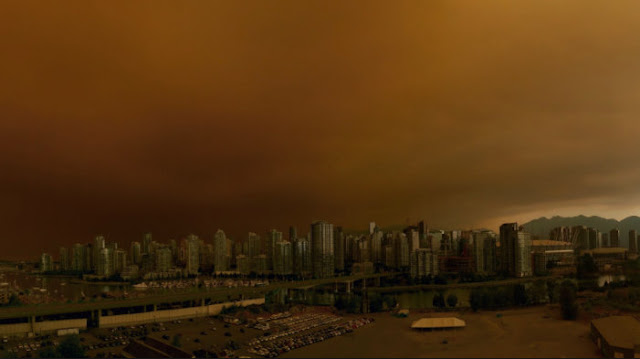 For it can only remind people there, as well as those in Saskatchewan where massive fires are also burning, of the dangers of global warming.

And how he has done NOTHING to fight it

So no wonder he's looking so melancholic.

Or sounding so desperate... 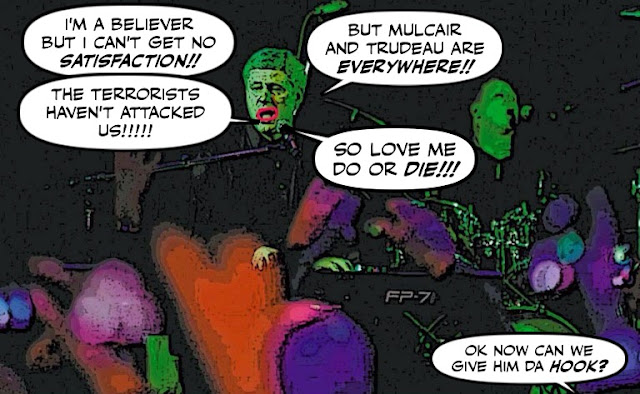 I think it's starting to sink in that his long and monstrous act may be almost over. That he's just been around too long, and that people are sick and tired of him.

And that it won't be long before the MC comes out on stage, addresses the almost empty house, and says:

Stephen Harper has left the building, and he won't be coming back...

Unlike a progressive the problem with being a snake Oil Salesman is that you cannot change your story as conditions change. If you do the people you have duped will realize they have been had and will become very angry so you are forced to keep the delusion alive and hope conditions will change back in your favor. Good oil prices, rampant terrorism either real or imagined and aggressive war like acts are good fodder for the delusion. Unfortunately for Stevie his delusional issues have reached a lull which hopefully will remain stuck in the doldrums until after the election so we elect a government that has a more balanced sane approach to these challenges as well as the many others that have been totally ignored.
Rt

Great post and I am happy to say that although I clicked on the link to view Harper "tinkling the ivories", my curiosities, much like a moth drawn to a flame, I was prepared to be sickened. As luck would have it, there was something wrong with the sound so my day wasn't ruined and I got to see the visuals in a truer perspective. I recommend everyone view the video with the sound off to better see his pain without the distraction of his pathetic vocal performance.

This swan song performance pretty much sums up his tenure as PM, brutal(on the ears) and pathetic.
JD

On June 25, Dean Del Mastro--Harper's former parliamentary secretary--was sentenced to a month in jail after being convicted of cheating during the 2008 federal election and covering up his crime. He was granted bail, but not before spending a night in jail after being marched to a waiting police van wearing handcuffs and leg shackles.

NDP ethics critic Charlie Angus noted that Del Mastro was picked out of the Conservative caucus "to stand up and speak for the prime minister on issues of ethics and accountability."

"The fact that Dean Del Mastro is being sent to the crowbar hotel sends a message," he said in an interview with CBC News.

Here's some new lyrics for Sweet Caroline, titled Dean Del Mastro. Hopefully Harper will add it to his song repertoire on the summer barbecue circuit.

The photo of teenage Harper is one of very few I've seen of him online. Are there others of Harper as a child, teen, or adult prior to 2005/2006? For all we know the Harper of today is really a Terminator from the future tasked with destroying Canada over several years. His helmet hair with the ability to change colour is a give-a-way.

What may well be steve's undoing is First Nations. If First Nations people go out and vote in mass and not for the Cons, the Cons may find themselves out of a job. I would suggest Harper and his herd know it. It maybe one of the reasons they want all that I.D. before people vote. Many who live in remote areas don't have the I.D. we "southerners" have. We can only hope First Nations ensure all members have I.D. and go out and vote in mass. it will send a message the Cons and other political parties won't forget for some time.

The Cons like to "pander to the ethnic vote". they forget the First Nations each and every time and they do it at their own peril.