Hog Harper's Absurd and Desperate Assault on the NDP 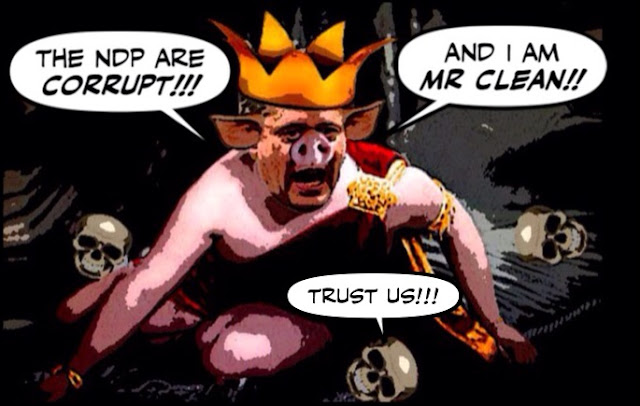 After smearing his own excrement all over this country, the lowlife political hog Stephen Harper is now accusing the NDP of being corrupt.

By firing this attack ad at them out of his rear orifice.

Can you believe it? As if that ad wasn't ridiculous enough, or confusing enough, or fraudulent enough.

Boss Harper is now suggesting that his depraved Cons and HIMSELF are the real forces of change.

Are the Conservatives finally feeling the heat from the NDP? Or did some staff at CPC headquarters just have some extra time on their hands?

On Tuesday the party launched its first attack in quite some time against Tom Mulcair’s party, rolling out an ad and a website with a petition — www.payitbackndp.ca — that calls on 68 official opposition MPs to repay taxpayers $2.7 million spent to “hire partisan campaign staff”.

“Is the kind of change you want the NDP to bring to Ottawa the NDP?” the ad asks.

Even though this whole controversy is contrived, and the product of a kangaroo court.

The issue, in a nutshell, is whether NDP staffers working in satellite offices were doing parliamentary work or party work. The NDP says the latter, but a parliamentary committee in which they were the minority — the Board of Internal Economy (BOIE) — ruled against them and ordered the money paid back.

Even though it's clear that the NDP, outside of an election period, were using the money to provide services to their constituents in the places where they live, rather than in Ottawa where they don't.

Even though the Cons have spent almost a BILLION dollars of taxpayer's money on porky action ads that are riddled with lies, the lowest kind of propaganda.

And in at least one case, as I pointed out in this video, demonstrably FRAUDULENT...

And even though, as everybody knows, there is no more criminal and sleazy gang than Hog Harper and his lowlife Cons...

The gang who are trying to buy an election with money they don't have. Because there is no surplus.

The gang who tried to steal an election. And have made it easier to steal the next one.

The ones who are always attacking Justin Trudeau in the most disgusting manner.

They're trying to pose as the clean Cons?

But then of course they are desperate. The Del Mastro affair is giving them all nightmares... The Duffy trial resumes in two weeks time which will only make Stephen Harper look even more corrupt. If that's possible.

And if a cover-up is shown to have happened, it could land Great Smelly Leader in the hog pen where he belongs... 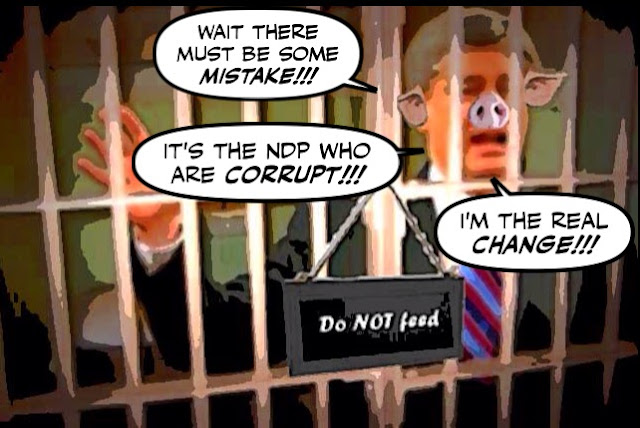 But yes, they are the Harper Cons, the filthiest government this country has ever known. The ones who are always trying to smear others, or trying to prove that others are as bad as them.

Only to end up smearing even more of their own porky excrement all over THEMSELVES.

Hog Harper a force for change?

Honky, honk, oinky, oink. Good luck with that one.

Polls and forum comments indicate that people west of Alberta and east of Ontario have judged and decided that Harper and the Cons have to go! Aside from a real or imaginary major terrorist attack no amount of attack ads or porky treasures will change that. The western provinces still think that Harper can get their oil to market and the pipelines built but some may come to realize that with the denial of climate change and massive lobbying he is viewed as untrustworthy and has done more harm than good. The Keystone rejection ( likely but not a forgone conclusion) may be a wake up call and hopefully convince some of the west that there are smarter more honest political alternatives. Assuming that the west is unlikely to budge barring a major epiphany such as Keystone rejection that leaves Ontario as the battle ground. They are likely to resemble nuked zombies on election day. Papers are already rife with news stories of Trudeau's arrogance and "jail,deport of kill the ba....ds" are still common themes in the comment columns. Its obvious that Harper's vision of selling massive amounts of oil and importing manufactured products in return does not help the average Ontarian nor does trampling on civil rights but this seems to have eluded a significant number of the population for now. Perhaps all of the smoke and lies have rendered people comatose but even if they don't wake up until after the election current polls indicate Harper does not get a majority which is marginally better than nothing. Hopefully the opposition will be able to shine some light of truth through the dense smoke on the economic and humanitarian disaster this party has been and will continue to be if they get another term in power.
Rt

As many of the political pundits have said for months, once the Cons start airing attack ads against the NDP (instead of attacking Justin and the Libs), then you know the Cons are actually fearful the NDP could win the election. Ha! I love it!

The Del Mastro affair is giving them all nightmares...

"The NDP says the latter, but a parliamentary committee..." should probably change latter to former.

Well, I think this Ad is only appearing online. When they start attacking the NDP on TV, that's when the real attack begins.

hi RT...yes it seems that Alberta and Saskatchewan are now the only obstacles to a progressive victory. I don't know if they realize it, but if they persist in blindly following the Cons, and torpedo our chances of bringing down the tyrant, they will fracture this country beyond recognition for we will never forgive them.
And neither will Canada. Still, the winds of change are picking up, Mulcair and the NDP are becoming more and more popular, and I'm still confident of victory...

hi David....I sometimes wonder if Harper knows he can't win, but is determined to go down in history as the man who destroyed the Liberal Party. The man is a maniac and his madness may be blinding him...

hi anon 1:20...yes that's true, the ad is only online, and it isn't a very good one. But as I've pointed out before the Cons have to watch how they attack Mulcair because like they did in the beginning with Trudeau they might only make him more popular....

hi David...nope you are NOT going to make me listen to Harper sing... ;)