The Gentle Spanking of the Con Clown Brad Butt 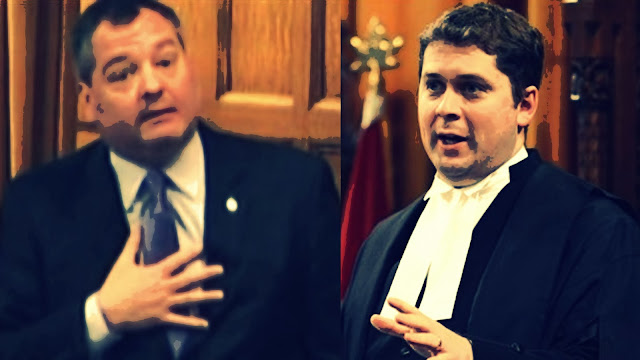 Golly. Can you believe it eh?

The Con clown Brad Butt has finally got his ass spanked. Sort of.

By the Speaker of the House of Commons.

Mississauga Conservative MP Brad Butt may have misled the House of Commons when he said he personally witnessed electoral fraud, according to Speaker Andrew Scheer.

Scheer left it up to MPs to decide whether Butt must appear before a Commons committee to explain comments he made in a debate last month — later retracted — that he had personally witnessed voter fraud in his riding.

And the only thing that shocks me is why the Speaker would only rule that Butt MAY have misled the House.

“The fact remains that the House continues to be seized by completely contradictory statements,” Scheer wrote in his ruling. “This is a difficult position in which to leave members who must be able to depend on the integrity of the information with which they are provided to perform their parliamentary duties.”

When his Big Lie was so OBVIOUS...

And why did Andrew Scheer forget to mention that what makes Butt's disgraceful performance even more egregious, is that he's on the committee studying the so-called Fair Elections Act.

The MP for Mississauga-Streetsville made the comments during debate on Bill C-23, the Conservatives’ sweeping electoral reform bill that would prevent voters from using the voter identification cards as proof of identity at the polls.

Democratic Reform Minister Pierre Poilievre has repeatedly suggested that the use of ID cards has lead to irregularities, although critics have pointed out that the vast majority of those irregularities are administrative in nature.

And it's only too obvious that when Butt cried wolf or fraud, he was doing it to promote that bill.

And could only have been talking about his fellow Cons.

If the problem is fraud, as the Conservatives suggest, who are the fraudsters? They’re not ordinary voters; they’re the very Conservatives who pretend to be so concerned about fairness.

It’s the Conservatives who paid fines for their inappropriate campaign financing in the in-and-out scheme. The Conservatives made the fraudulent robo-calls that are now before the courts.

It’s Conservatives like Dean Del Mastro and Peter Penashue who overspent campaign limits. And it’s the Conservatives who were accused of vote-suppression tactics aimed at supporters of other parties.

But then I should have known the fix is in. And that Peter "Tubby" Van Loan would make sure of that. 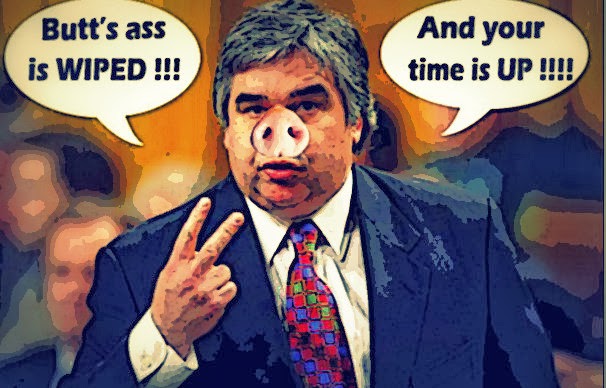 According to the statement just delivered in the House by Government House Leader Peter Van Loan, he's apparently heard enough on this matter, and is now officially giving notice that at some point tomorrow, his party will move to impose closure -- not time allocation, flat-out closure -- on the debate.

Because Tubby is Tubby, and as grubby as they come.

And everything the Cons touch, stinks of corruption or FRAUD...

Which is of course the good news eh?

The stench is even greater today than it was yesterday.

And you know to which sausage factory those Con hogs are going... 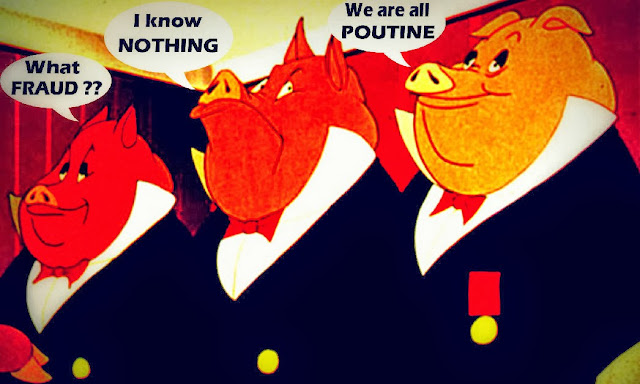 Lest we forget.
Back bench harpercons like Beavis Butt never speak their own thoughts in the house.
They spin the script given them by the short panters in the pmo and Butthead was just puppeting his marching orders.
Butt will soon join the horde under the tory bus but the real culprit in the pmo will once again slither away into the shadows.

Oh yeah. Butt's initial statement (lie) cam direct from the corrupt PMO boys in short pants and the odious Jenni Byrne. The piece of shit Butt read it off as instructed. Now it's, as usual for Harper's thugs, in cover up mode.

Yesterday and today, after Question Period, a motion is being debated whether or not to refer Butt's February comments to a committee that could lead to a charge of contempt of Parliament. Of course the Cons are saying it's a waste of time because Butt apologized!

Reference to Standing Committee on Procedure and House Affairs

Mr. Nathan Cullen (Skeena—Bulkley Valley, NDP):
Mr. Speaker, I move:
That the question of privilege related to the statements made in the House of Commons by the member for Mississauga—Streetsville be referred to the Standing Committee on Procedure and House Affairs.
Mr. Speaker, thank you for the ruling you just delivered to the House of Commons. I will read it in detail later, but I wanted to make some introductory comments based on what I have heard today and the debate
that preceded this.
We have just now moved the motion of contempt that has been found in the House against the member for Mississauga—Streetsville. As you noted in your ruling, the criteria or threshold that we use in the House of Commons to find a prima facie case of contempt is a very high one. It is in fact not easy to do. Canadians might be surprised by this, but the rules that govern the House, as pointed out by the Conservatives and you, is to give members the benefit of the doubt. In many instances, and it is in the nature of healthy debate, that there
are differences of opinion and differences of interpretation of fact, and if every time a member of Parliament were called out in contempt for a variation of evidence, then we would be here all day.

You can watch the video of the March 3 debate at:

The same Jenni Byrne who had in the past been romantically linked to Pierre Poilievre?

If Butt received the talking points from the PMO, what would have been the payoff for him to do so? A brochette platter delivered by Harper himself?

hi Ron...yes of course you're right, that is the big question. Was Butt ad-libbing or ad-fibbing, or was he just delivering a script written for him by the PMO? It seems too outrageous even for the, especially since Butt is on the committee "examining" the bill. But they are a criminal regime, they are desperate, so anything is possible. And what bugs me is that you almost have to think like a criminal to figure out what they are doing. I pine for the day of decency...

hi wazz...it certainly would explain why they are going to such lengths to make sure Butt doesn't get punished. Because if he was, he might spill the beans, and that wouldn't do would it? Honestly, as i told Ron, sometimes I feel I'm suffocating in their filthy fumes,..

hi David...yes it was a decent move and a good try by the NDP. But of course it was doomed. We are not dealing with a Canadian Parliament anymore we're dealing with a fascist circus.It's absolutely unbelievable, and it couldn't be more disgusting...

hi David...I detect Byrne's hidden hand, or paw, all the time these days. There's something out of control in the PMO and it's got to be her. And the good news? She's a ruthless fanatic, but not smart enough for her own good, and sooner or later she will get them all into big trouble. I'll have to stop by on my way to Montreal, and visit her at the Women's Prison in Kingston....;)

Mississauga Conservative MP Brad Butt may have misled the House of Commons when he said he personally witnessed electoral fraud, according to Speaker Andrew Scheer. Check status of Voter ID Card