The Putin Games and the Fascist Circus 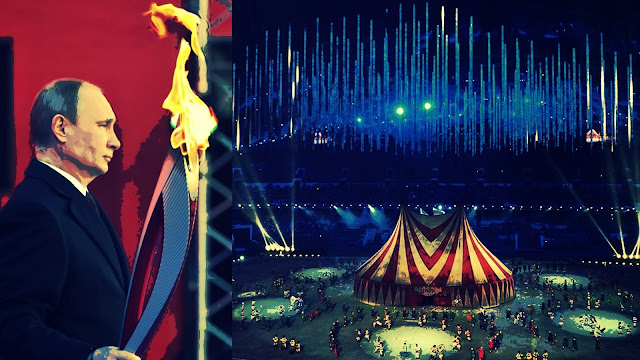 Like millions of others I was dazzled by the closing of the Sochi Games, for it was a spectacular display of the best that Russia has to offer.

And I was happy to see the smiles on the faces of our athletes after such a successful Olympics.

But I have to admit I really didn't feel like celebrating, not when the biggest winner of those games was the sinister thug Vladimir Putin.
Putin did not speak at the closing ceremony – host country leaders never do at such events – but Dmitry Chernyshenko, president of the Sochi Organizing Committee, seemed to take the words out of Putin’s mouth. “This is the new face of Russia,” he said.

Who would boast that his games are the new face of Russia.

When in fact this is the real face of his fascist country...

And in the face of that brutality. 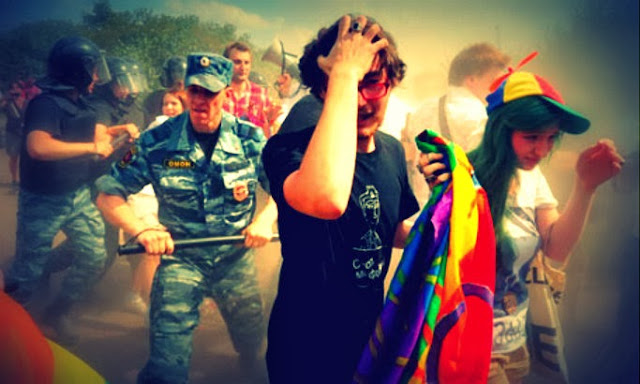 I have to admit I found the silence of the athletes deeply disappointing.

Before the Sochi Games, a number of Olympic athletes pointedly spoke out against Russia's controversial gay 'propaganda' laws. The law mandates fines for speaking in defense of gay rights or saying gay relationships are equal to heterosexual ones in front of minors.

Once the Games got under way, the public criticism all but went quiet.

For there wasn't a single gesture of defiance, a single sign of solidarity with Putin's many victims, gay or straight.

And at worse there was this... 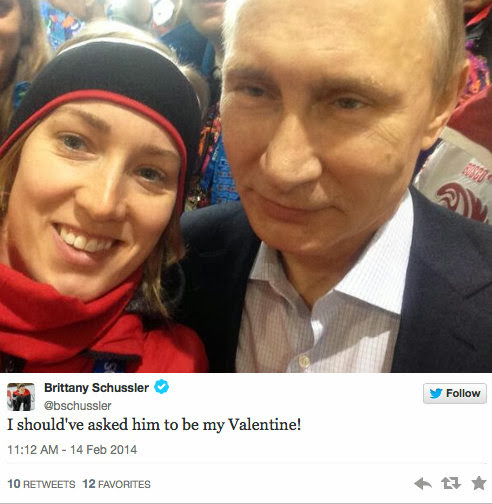 Which made me shake my head in disbelief, or feel like vomiting.

But then maybe I was expecting too much, because I was also reminded how easy it is for all of us to be distracted by these kind of sporting events.

To get caught up in the excitement, and forget everything else, even when what we're really witnessing is a fascist circus.

Just like people did during the Nazi Games, where Adolf Hitler was the big winner... 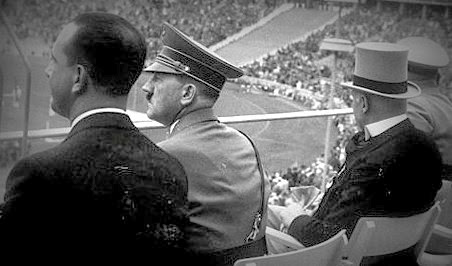 And where when the games were over, Germany's Jews asked the world not to forget them. But everybody did, until it was too late.

So I'd like to think that some good will come out of the Sochi Games.

If the Olympics hadn’t come to Sochi, there wouldn’t have been such a tough but needed dialogue over whether the International Olympic Committee needs to stop awarding the Games to countries that commit human rights violations.

I'd like to think they will help the Russians head for the light instead of further into the darkness.

But when I saw how the ghastly I.O.C. boss Thomas Bach was slobbering all over Putin... 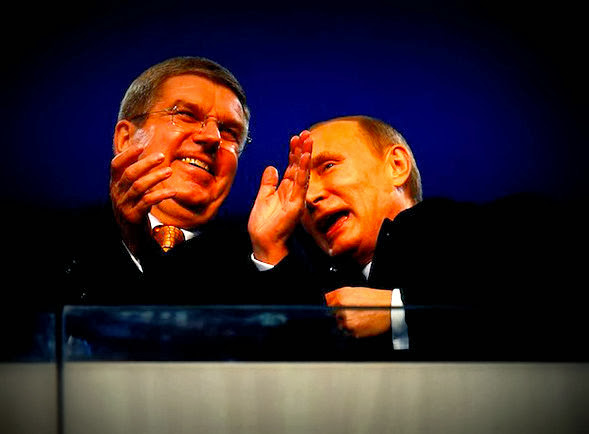 Like his predecessors slobbered over Hitler at the Nazi Games. I doubt that anything will save the Olympic movement.

And when I read what 17-year-old, Vladislav Slavskiy, the only openly gay teenager in Sochi told Billie Jean King:

King: “If we could do one thing for you, what would it be? How can I help you?”

Slavskiy: “I don’t know how you can help me.”

I doubt that things will improve in Russia. I can only see them getting worse. Especially now that the games have made Putin more popular than ever.

So yeah, it was a dazzling spectacle, a great sporting event, a monumental circus.

But I can only think of those who were forgotten.

So I'm giving the Sochi Games and Putin's Russia, a big thumbs down...

But I will remember that horrible silence. 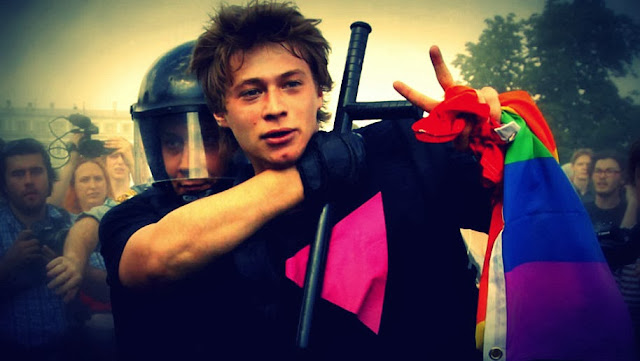 Hitler and his games (despite the stunning victories of Jesse Owens, they remained successful fascist propaganda), but also that contemporary of his, that other mass-murdering tyrant, Stalin. The Soviet revolution swept away all the old repressive laws on sexual matters, which decriminalised homosexuality and struck a blow against patriarchy in general, but Stalin recriminalised homosexual relations in 1933.

Despite the beauty of the athletics, the lack of any meaningful protest made me not even want to watch the games.

Now I'm listening to the crap going on in the US, with Arizona planning to "allow" discrimination against LGBT people on so-called religious grounds. Will leave this on a positive note, though:

The Os prior to WW II did make Hitler look good. However, the Jews were never going to be remembered by anyone. when they tried to leave Germany to go to North America or England, etc. they were not welcomed. . Some were returned to Germany and eventually went to the death camps. it won't be any different for the gays, lesbians, etc. When they start applying for political asylum in other countries, do not expect them to be excepted. Their governments will be no different from the fat ugly cats at the IOC, who never met a thug they didn't like as long as they were going to give them everything they wanted.

Yes, the games showed the New Face of Russia, but it actually wasn't the new face, its the old face of Russia, its just out in the open now and they are proud of it. Leaders exploit the ugliness of humanity to detract from the real issues in a country. I'm just wondering what oil can will try. The republican thugs have already chosen theirs. they first tried Latinos but that didn't work, so now its gays. You really have to wonder why a state leg. would spend as much time as they are to suppress gay rights when there so much else which needs to be done in their country. those thug politicians simply took a page out of Hitler's play book and going for it.

The world as sat around while countries killed millions of their citizens and nothing much was ever done about it. Not much will change now.

hi Lagatta...yeah it's a great time to be gay eh? Or just as good as usual. I did watch a bit of the games hoping for some sign of solidarity, so I was disappointed. And as for Arizona, it's also disgusting a racist and a homophobic place, and the asshole of Amerika. But it only makes me want to fight the bigots even harder than I already do, so it's OK. And thanks for the video. Gilbert Bécaud may or may not be spinning in his grave, but I loved it ... ;)

hi e.a.f....good comment and so true. As I told Lagatta it is very depressing, but it only makes me want to fight the bigots even harder so out of bad comes good. As for Russia, as I've said before, when I was a boy I felt a kinship for that country, and I have always admired their great fight against the Nazis, so I'm even more disappointed about what's happening there. As I said, maybe the games and all the criticism they have received will help them become a better country. But right now I'm not feeling too optimistic...

You can also access the video and "the making of" at www.nathalieenrussie.com . The royalties all go to human rights lawyers in Russia, defending LGBT protestors or targets of the homophobic law, artists like the Pussy Riot, but less well-known, and far too many other victims of this latest version of good old Russian authoritarianism...

Read "Le projet - The Project" at that site for the motivation behind the new version, and the original one 50 years ago.

We can also think of Elton John's 80s hit "Nikita". The video shows a doomed het relationship across the Berlin wall, but of course John, who is of the age to remember Nikita Krushchev, would know that it is usually a male given name in Russian, and indicated that he did in an interview. He seemed to assent to the straightwashing.