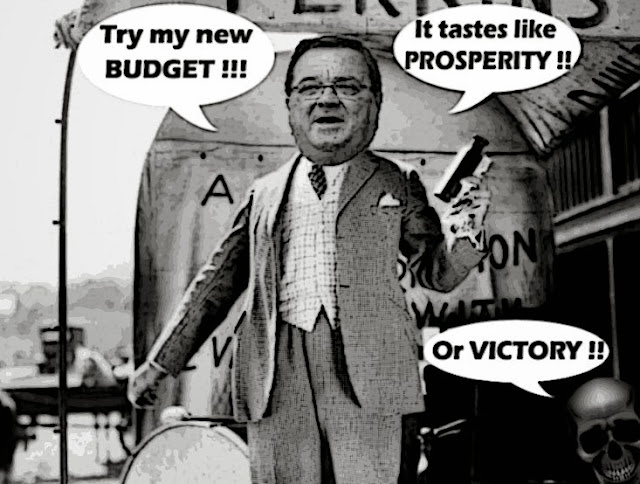 I like to think that Jim Flaherty's recent illness has made him a better human being, because I'm a firm believer in the power of redemption.

And he has come a long way from the days when he was calling for the homeless to be jailed.

But unfortunately he's still a Con, he still works for Stephen Harper, and his latest budget is nothing more than the product of a snake oil salesman.

If misleading advertising were an Olympic sport, Finance Minister Jim Flaherty would win gold. His latest budget is a masterpiece of hype and obfuscation. The 419-page document is entitled “creating jobs and opportunities.” But it does neither.

It's all hype, no substance, and entirely political.

All budgets are political. But Prime Minister Stephen Harper’s Conservatives have become masters of this art form. The new spending tidbits are carefully aimed, either at demographic groups who might vote Conservative or at issues that have received a lot of media attention.

It sprinkles a few dollars here and there to pleasure the Con base, and make the dumb feel good.

But when you pop those tiny balloons it's just another austerity budget that does nothing to lift an economy that could be heading for a crash landing. 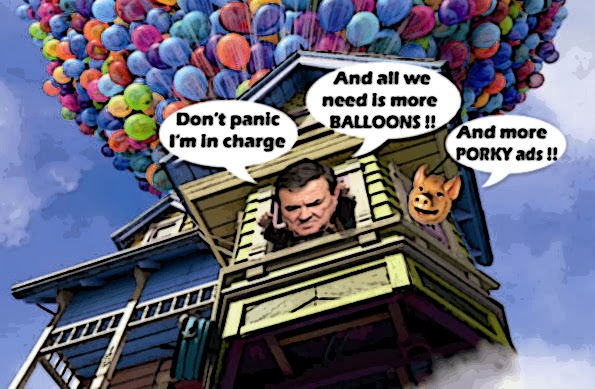 A budget that kills jobs instead of creating them.

And paves the way for an all-out assault on the public service unions.

Perhaps not surprisingly for a government so antagonistic to collective bargaining rights, these drastic cuts which target health plans and benefits are being proposed before any deal has been struck with the unions that represent public sector workers.

Which of course is the final stage of the Con regime's plan to turn us into a low-wage economy.

And cut government to the bleeding bone... 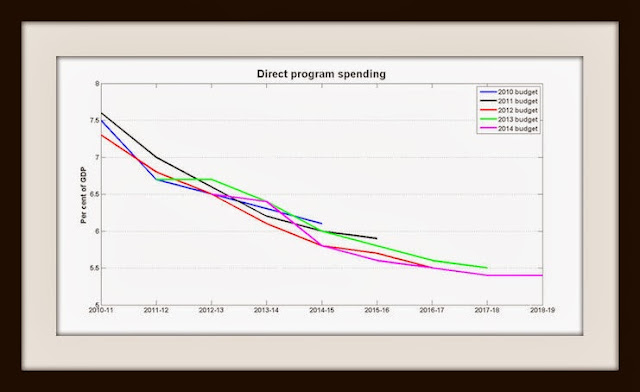 Because just one look at that graph is all you need to know about where these rabid right-wing ideologues are taking us. To a society that looks like a JUNGLE.

You know, although I live comfortably myself, I interact almost every every day with some of the country's poorest and most vulnerable citizens. Poor seniors pinching pennies to survive, struggling to hold on to their dignity. Poor young people rendered hopeless by unemployment, or exhausted by lousy jobs with no money, no security, and no future. Poor children with hunger in their eyes, but too proud to admit it.

And I'll never accept or even understand how this can happen in a place as rich as Canada. Where once, because of our harsh climate, we used to take pride in helping each other.

But of course the Cons don't care about any of that. Their goal is to shrink government until, as their Republican friends like to say, they can drown it in a bathtub.

All Jim Flaherty and his sinister leader Boss Harper are focused on, is getting a stash of cash together so they can bribe wealthy voters in the next election... 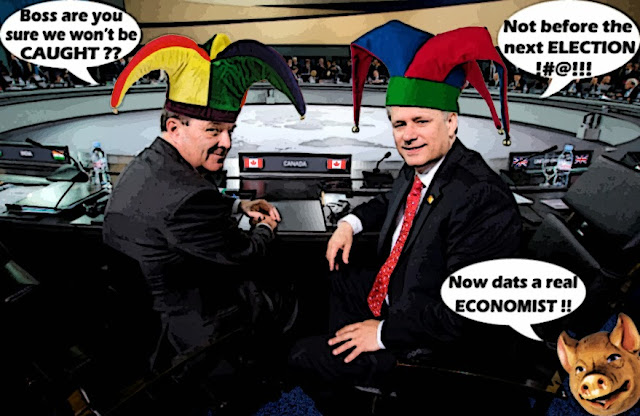 And we won't know the real impact of this latest budget before that election, because even the Parliamentary Budget Officer is still trying to figure out the impact of the 2012 budget.

Nearly two years after a 2012 federal budget that announced $5.2 billion in cuts and eliminated 19,000 jobs, the Conservative government continues to stonewall the parliamentary budget officer’s efforts to obtain information on how the cuts are affecting programs and services.

Only in Harperland eh? Where transparency is the enemy, and you can be almost sure that what we don't know will hurt the poor and the vulnerable. And leave us living in a meaner more miserable country.

And the good news? More and more real economists are finally coming forward to tell the Cons to stop putting their narrow interests before the interests of the economy.

Hours before Jim Flaherty tabled his stay-the-course budget, 74 worried economists finally found their voices. “We, the undersigned, strongly urge the federal government to stop implementing fiscal austerity measures just to achieve its goal of budgetary balance,” they wrote in a collective statement to the finance minister.

And we can use the weight of that opinion to challenge the slash and burn Con mantra that they have brainwashed so many Canadians into believing.

The good news, the day after Flaherty’s budget, is that credible economic challengers are finally stepping forward. Canadians are no longer content to move in lock-step to an ideological goal they accepted unthinkingly. The opposition leaders are on notice that the nation is tired of hunkering down, waiting for the market to provide deliverance.

Use it to take the gloss off this budget, strip the Cons of their phony economic credentials.

Defeat them in the next election.

And send those snake oil salesmen and Con artists.

To the place they rightfully belong... 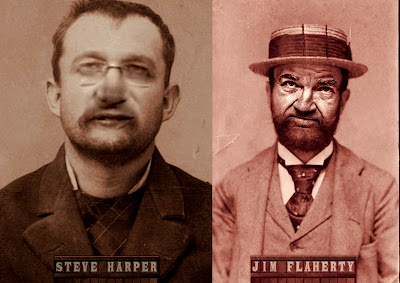 Snake oil salesman is an apt description Simon. Whenever I look at Flaherty, I think of a run-down used car lot with him in a shiny green tie with a cigarette hanging out of his mouth, selling junk cars to unsuspecting people. Really that's exactly what he does over and over again to the Canadian public. The old adage putting lipstick on a pig should wipe that phoney title creating jobs and opportunities off a budget that seeks to squeeze every last once of spending power out of a dumbed down public. These guys are far from having any kind of credibility in regards to the economy.

Harper and Co. are supposedly Keynesian Economists. but in practice they are following Friedman's and the Chicago boys techniques (not surprising as Harper's idols, Tatcher and Reagan where both followers of Friedman). For a real world example of where Canada is heading, and what these type of economic ideology takes us, simply take a look at Chile under Pinochet.

I've thought of him the same way since he was the Ontario Finance Minister under Harris and Eaves. He scammed the province and for his deception was awarded the top Finance job in federal government. Normally in business people that do that are charged and tend to go to jail, but in HarperLand, he's given a huge reward.

When he gets up there and delivers his budgets, he's telling us how he's going to screw us over relentlessly and how much we're going to love him and Harper for it. It's a sociopathic tendency of believing the abuser is doing their victims a service.

I heard something on the radio about a budgetary measure to help older workers. Being over 55 myself, I thought there was some glimmer of a positive measure for me, but no, it seems restricted to communities of 200,000 or fewer. Talk about targeting! Guess they think older workers from smaller towns are more likely to vote Con, even if they suffer economic hardship.

Anonymous 8:59 am, I've never heard the harperites referred to as Keynesians; they are very much in the Friedman line.

Hello Simon...Here is one way to fight back, get on board and spread the word..Democracy depends on it.

hi bcwaterboy...I'm glad you like Jimbo as a snake oil salesman, I didn't have time to give him a suitable hat, but you can't have everything. ;) But yes his has been a long and sorry act. I can never forget that his special visitor in Parliament on the day he released his first budget was no other than our oleaginous friend Charles McVety. And although he is showing some signs of humanity, he remains an extremely partisan and dangerous Con...

hi Noah...yes who can forget his years in the grubby Harris regime, or how he left the province mired in debt. And of course I can never forgive him for creating a legion of the homeless, and then threatening to jail them. He is of course still very active in Ontario politics, as his wife is the deputy leader of the Hudak party, and he is willing to do anything to try to damage the Liberal government. But my guess is that he's just about done like dinner and will be leaving very soon...

hi anon...I don't think they are Keynesian economists, his name would have been considered a bad word at the three-person Ayn Rand club Harper used to frequent. Definitely more in line with the Friedman gang, and a groupie of Leo Strauss. In addition to being yet another Thatcherite stooge, and our would-be Pinochet...

hi lagatta...I'm sorry to hear that there was nothing in Jimbo's tiny bag of tricks to help you. But what do you expect every measure in this budget is micro-targeted at a group that either supports them, or could be bribed to vote for them. And they've given up on you. In these dark times I would consider that a badge of honour... ;)

hi Grant...thanks for the link. That is a very good letter to send to universities. Personally, I'd like to see a similar letter sent to all high schools as well. We clearly have a major problem making young people understand why it is so important to be politically aware, and above all vote. it's one of my main concerns. I personally herded six younger Canadians to the polls during the last election. When I'm not blogging I am organizing in my community, and I hope to deliver dozens next time. If everybody could deliver at least two young people in their neighbourhood to the polls we will crush the Cons in the next election. I'm hoping to share my ideas about how to do that in the next couple of months...

Re: Petition supporting Economists Against Austerity

Recently a group of progressive economists spoke out against current government austerity policies.

In order to support them, I have started an on-line public petition.

Would you take a minute to read it and if you agree, add your name?

Many thanks for your help!