Stephen Harper and the Con Klown Tour of Mexico

When I saw this picture of Stephen Harper in Mexico City, and saw all those soldiers firing their guns in his general direction, for a moment I thought his Three Amigos Summit was going to be even more disastrous than I had imagined.

But no it wasn't a firing squad. It was the only 21-gun salute the Mexicans were willing to give Lord Harper, so little respect do they have for him.

And it's all downhill from here eh? Because the trip is shaping as an unmitigated disaster.

Prime Minister Stephen Harper won’t be bringing the news his Mexican host wants to hear, nor hearing any himself from U.S. President Barack Obama, as North America’s beleaguered Three Amigos converge on Mexico this week.

He's alienated the Mexicans by refusing to lift a heavy handed visa requirement, which is not only bad for business.

But also makes it harder for Mexicans to escape the horror of their country's drug war. 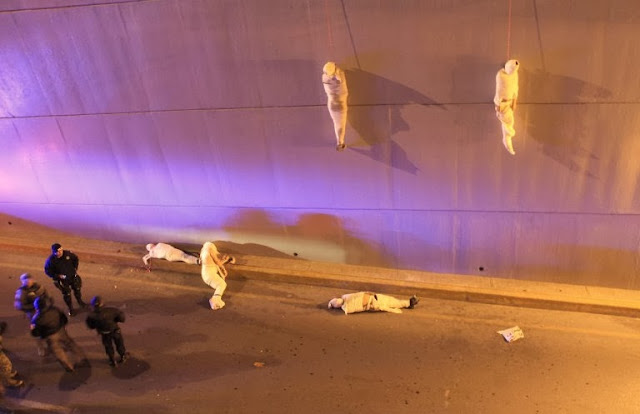 Escape the murderous cartels that scatter bodies around like dolls.

And he's also irritated the Obama administration so much they've just about told him to go jump into Lake Titicaca. With the emphasis on CACA.

Obama's unwavering message, according to White House officials? We'll let you know when we've made up our minds.

But then what do we expect from a man who until he became Prime Minister at the age of forty-seven, had hardly travelled abroad.

And is so ignorant and incompetent when it comes to foreign policy he has turned us into a pariah nation and shamed us in the eyes of the world.

A Con clown who would take a tiny delegation to Mexico, to meet with the two big countries on our continent.

But take a gigantic delegation of religious fanatics, Con hacks, honkers, homophobes, and shills on his Grand Tour of Israel... 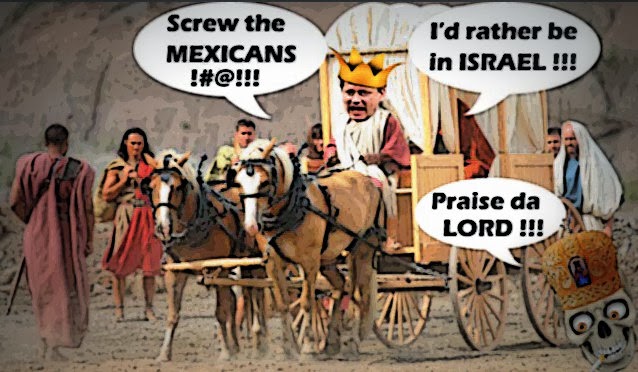 Even though as Jeffrey Simpson points out Mexico deserves better.

The contrast could not be clearer. Total bilateral trade between Canada and Mexico is about $30-billion; with Israel, it’s about $1.4-billion. Mexico is Canada’s fifth-largest export market, Israel is Canada’s 44th. Two million Canadians visit Mexico each year. The government’s new trade strategy document identified Mexico as a priority market.

It's absolute insanity. And for his disastrous foreign policy alone Stephen Harper should have been fired long ago.

But of course he soon will be. Canadians are sick and tired of him and his corrupt and hopelessly incompetent Con regime.

And having to wear paper bags over their heads when they travel abroad is the absolute limit... 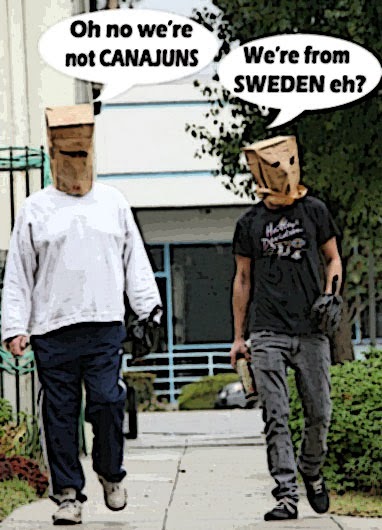 Yup. It's going to take us years to repair the damage the Cons have done.

But the sooner we defeat them and start the reconstruction process the better.

And in the meantime stay tuned for Stephen Harper's not so grand Con Klown Tour of Mexico.

It may be humiliating.

But it should also be HILARIOUS.... 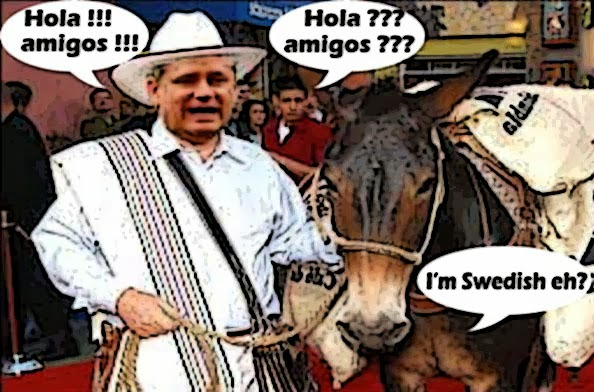 The Liberals used to make me cringe with their foreign policies, but you're right; harper is a complete and total failure. He's an international disgrace.

Looks like the squad needs a little more practice....

Thanks for the informative blog post on Harper's visit. It led to other articles and it was interesting to read other people's comments. It's nice to know that so many people are tired of Harper and his gang of psychos. I have been told that morale is very low in certain work places. Canadians feel insecure and depressed because of Harper! Anyways, Heather, we can all talk until we're blue in the face. Harper is Prime Minister of Canada and unless we can find a way to get YOUNG PEOPLE to the polls, he has a very good chance of winning the next election. And then, hello serfdom for Canadians. He has already taken away one of the things we most cherish which is our health care.

loved the picture. for a minute there I thought they were the firing squad and things might improve. ah, well hope springs eternal. at the rate things are going in Canada, some of us may wind up asking for political refugee status in Mexico.

At the rate things are going Obama may simply say no to Keystone to spit oil can stevie. As to the visa requirements for people from Mexico, those coming here as refugees were trying to escape the drug cartel violence in Mexico. The 3 amigos might have spent some real time deal with the violence, as it does spill over into other countries. Perhaps if all 3 countries simply stopped this "war on drugs".

oil can stevie is there simply because he "has to be". Perhaps the 3 amigos ought to have spent the time figuring out how to deal with the white collar crime in the 3 countries and work from there. of course oil can stevie will sleep through it all. the president of Mexico will get nothing done and Obama will wonder how fast he can get home.