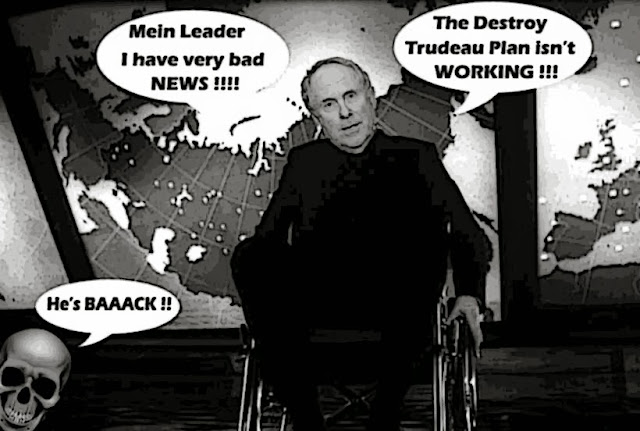 Oh. Mein. Gott. I see Tom Flanagan, the Dr Strangelove of Canadian politics, is back with a new book.

And a warning for his former master Stephen Harper.

His all-out assault on Justin Trudeau is just not working.

Prime Minister Stephen Harper’s former campaign manager says the governing Conservatives are falling short in their personal attacks on Liberal leader Justin Trudeau and will have to shift their emphasis to his policies.

“Justin has proved very hard to attack personally,” said Flanagan. “The ‘in-over-his-head’ theme doesn’t seem to be having much of an impact with voters. It may some day, but thus far it doesn’t seem to have worked that much.”

And the reason? Stephen Harper is just too unpopular.

“It’s difficult to attack somebody who is held in higher esteem than you are. Often, the attacks just fall harmlessly.”

As a result, he said, the personal contrast between Harper and Trudeau is deeply ingrained. “He’s the anti-Harper,” Flanagan said of Trudeau.

Which isn't particularly insightful, but coming from Harper's former mentor who knows him better than most, is probably good advice.

But luckily for us it's advice Great Ugly Leader probably won't follow.

Judging by the way he was staring at Justin Trudeau in Question Period today... 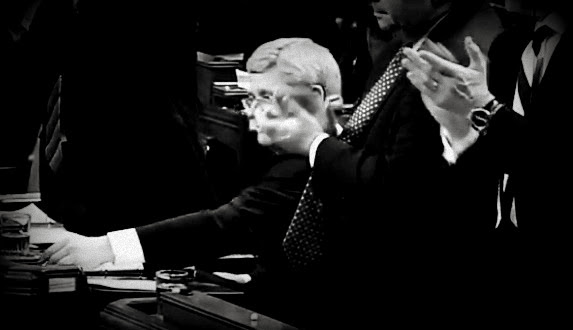 Because it IS personal. The thought of being the Prime Minister who revived the Liberal Party and brought another Trudeau to power must be just KILLING Harper.

And I predict that he will take his entire government down in his effort to destroy him... 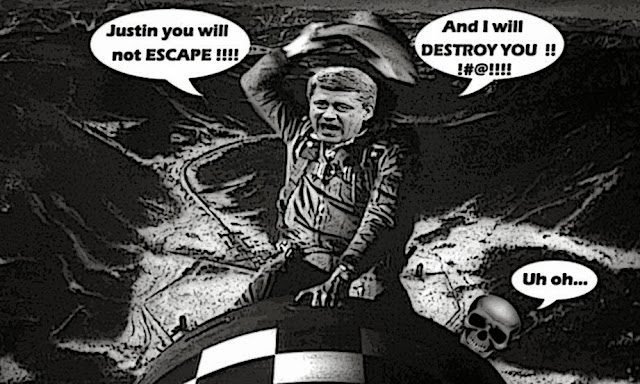 And as for Strangelove's prediction that the politics of hope and optimism won't work...

Flanagan has written a new book, Winning Power, in which he writes of how fear has become the most “powerful political emotion” in Canadian election campaigns.

“Canada really hasn’t had a federal election inspired by hope since Pierre Trudeau campaigned on the theme of the Just Society in 1968, and that mood lasted precisely for one campaign,” he writes.

Well let's just say that Flanagan doesn't seem to understand that's exactly why so many Canadians want something new and different.

Because it's about time eh?

And of course the last time Strangelove came up with a PLAN.

You know, hope IS a powerful weapon. And not just for Justin Trudeau.

The NDP should try it too.

Because it's something the Cons can't offer up on a porky plate.

And it WILL help destroy them...

Just curious what you think about the fact that Mulcair is open to a coalition, but Trudeau is opposed to it. This means a vote for Trudeau is a vote for Harper because he won't work with Mulcair.

Indeed, Simon, I love you dearly, but simply don't get your infatuation with that bourgeois twit. He isn't opposed to ecocidal petrocracy, or the other main thrusts (yep, intended) of Canadian rulling-class policy.

I don't like that Trudeau does not want to vote with Mulcair! That is a very bad sign! We need to get rid of Harper. Doesn't Trudeau get that!

hi Ryan...I saw the story and I'll write something about it soon. All I'll say for now is that if the NDP and the Liberals end up with the choice of another Harper government or a coalition, the choice will be made for them...

hi lagatta...I you know the feeling is mutual. So how can you accuse me of being infatuated with Justin Trudeau? I don't support a growing number of his positions, and as I said the other night along with the rest of my riding I'll probably vote for Olivia Chow again, or whoever replaces her. But I hate to see anybody bullied by the Cons, it gets my back up no matter who it is. And I found it amusing that Strangelove Flanagan would counsel Harper to stop his personal attacks on Trudeau, when the good Dr once talked about salting the Liberal's fields. But of course that was my mistake. What with the winter we're having, the state of the population, and the state of my inspiration, and attempt to be funny was doomed to fail... ;)

hi anon...don't worry, if the time comes, he will. But I will need a whole post to explain why *sigh* ;)

Yes, I know they will work together if the time comes.
I'm just worried about a similar scenario the last time the 3 opposing parties agreed to a coalition - that was the first time Harper prorogued parliament and ended the wave of optimistic coalition.
Good to keep it clear to Harper so he can't use it against us.

when the ballots are counted and the choice is co-operate or oil can is the P.M. for another 4 yrs, trust me, they'll swallow the ego and get on with business. If they don't their own caucuses may dumb them. At this point in time each of them want to appear like they are going to win a majority. they need to present to the electorate they will win a majority or they won't get anywhere. later, they will be more "reasonable"

I'm not put off by the idea of an NDP/Liberal coalition as I think it might cancel out some of their more conflicting or unworkable positions. And I don't think most people are buying the Con BS bugaboo over coalition governments anymore as I think a growing number are prepared to try one rather than face the unpalatable choice of another Harper majority. I think he has become increasingly untrustworthy, unpleasant, and un-Canadian in a good many eyes.

What does bother me - and I say this at the risk of offending anyone here, so I'll apologize if I do in advance - is that Mulcair and whatever policy steering committees exist within the NDP have drunk the same neo-Liberal Kool-Aid the the Liberal Party drank some twenty or thirty years ago. We've seen all parties in Canada move to the right over the years: the Cons abandoned the general decency and tolerance and moderate adoption of progressivism for the whackaloon, bible-belt, anti-knowledge, election rigging ways of the Rovian GOP and the Tea Party. Under Turner, Chretien, and Martin the Liberals openly embraced the "kinder, gentler" corporatism of Milton Friedmann, and in the NDP we've seen Mulcair try to disavow the party of any hint of democratic socialism to make things more palatable to the great mass of Canadians who wouldn't recognize socialism if it stared them in the face.

Trudeau has done little to carve out his position on several issues and made some bad choices on the ones he has (Tarsands, Keystone XL, and Northern Gateway). Mulcair, while putting on a stellar performance in QP over the Senate debacle, has done little policy-wise either. Neither has presented Canadians with a clear, positive, progressive choice for Canadians other than not being that treasonous ratbastard sitting in the PMO, and without that clear alternative position, Canadians ,ay end up choosing the Devil they know. Worse for Mulcair, he has squandered almost, if not all, of the massive momentum the NDP gained in the last election...