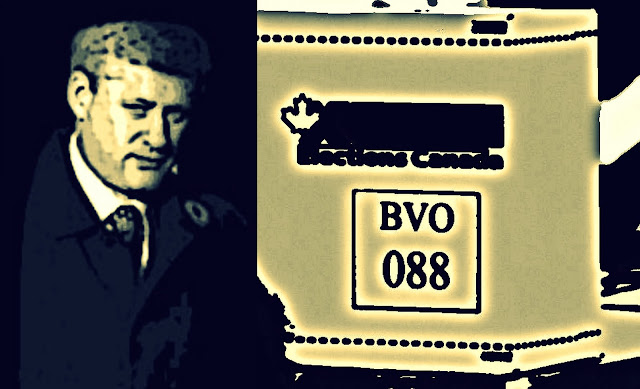 Last night I pointed out something about the Con regime's so-called Fair Elections Act, that to my knowledge the entire MSM somehow managed to miss.

And that is that this truly sinister bill is not just about satiating Stephen Harper's deranged hatred for Elections Canada, or increasing the Con fundraising advantage.

It's also about suppressing the vote.

And how did I manage that incredible feat?

Noticing this strange amendment and that totalitarian ONLY...

Section 18 of the Act is replaced by the following: 18. (1) The Chief Electoral Officer may provide the public, both inside and outside Canada, with information on the following topics only:

Comparing it to the original Act:

And realizing the changes are obviously intended to prevent Elections Canada from running campaigns to encourage Canadians to vote. Even though voter apathy is an enormous problem in Canada.

So I'm glad to see today that the Globe has finally seen through the smokescreen.

Elections Canada will be prohibited from encouraging Canadians to vote in federal ballots under changes the Conservative government are making to the agency’s mandate.

I'm really enjoying watching the stooge Pierre Poilievre's stooge trying to defend the indefensible in such an idiot manner.

A spokeswoman for Pierre Poilievre, the Tory minister for democratic reform, said the government doesn’t believe Elections Canada has a role to play in trying to boost turnout.

“Parties and candidates should inspire Canadians to take part in democracy,” said Gabrielle Renaud-Mattey, director of communications for Mr. Poilievre.

As only Mr Dick Head himself could... 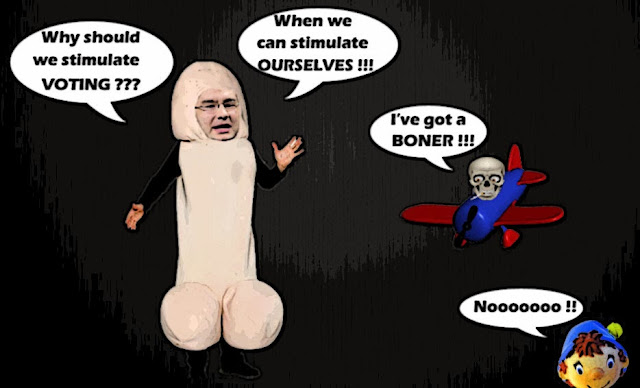 When in fact governments in every modern democracy run ads to encourage their citizens to vote.

This bill is designed to do exactly the opposite, as Chantale Hebert also points out today.

One does not need to read between the lines of the bill to come to the conclusion that the Harper government is more inclined to see a higher voter turnout as a threat than as an ideal outcome. At a time when most comparable jurisdictions are looking for ways to reverse a decline in turnout the legislation put forward on Tuesday nudges Canada in the opposite direction.

And to make it even more democratically diseased or perverted, it is also specifically aimed at discouraging younger Canadians from voting. For obvious reasons:

There are all kinds of models that purport to project how a higher turnout among younger Canadians would impact the outcome of federal elections. But they all concur on one finding and it is that the Conservative party would lose from such a development.

Can you believe that? Corrupting the present AND the future of our democracy, for crass partisan purposes. How low can they go?

But then why should anyone be surprised? When voter suppression is the dark heart of the Con strategy to win elections. The only way they can win with a core support of only about THIRTY percent.

That's what the robocalls were all about... 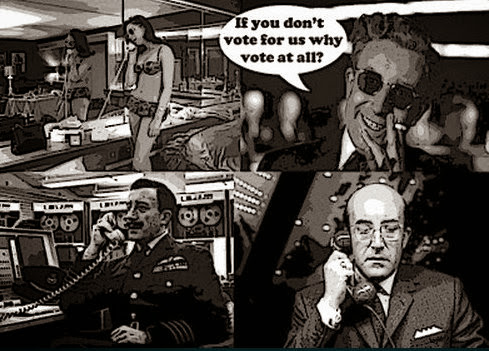 That's why they turn our Parliament into a Roman Circus. Where a rookie female MP can be silenced by a mob of howling Con jackals.

That's why the corrupt Cons are always claiming that all politicians are the same... 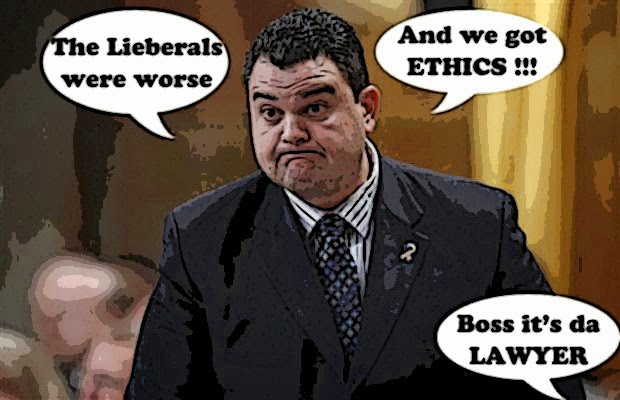 So decent people are disgusted by the political process, turn away from it, and don't bother to vote.

And the sad thing is that sometimes even progressives are guilty of doing the same thing to ourselves. By going on and on about how we're all doomed, or how there is no difference between Mulcair, Trudeau, and Harper. Or how we should have The Revolution BEFORE we seize power.

And by so doing reduce ourselves to a state of depression, hopelessness and paralysis, which is just what the Cons want.

Instead of stepping up our attacks on the Con regime and its deranged leader, mobilizing Canadians, encouraging ourselves, and joining ranks to crush the filthy Harperites in the next election, before they destroy what's left our country.

Which is why I'm relentlessly optimistic when I blog. Not because I'm stupid or naive, but because I want to cheer up progressives, try to make them laugh in the darkness, and encourage them to fight harder and smarter than ever.

Because I'm absolutely convinced that if we don't let the bastards grind us down, we WILL defeat them.

At least that's what I tell Jack who helped inspire me never to give up HOPE... 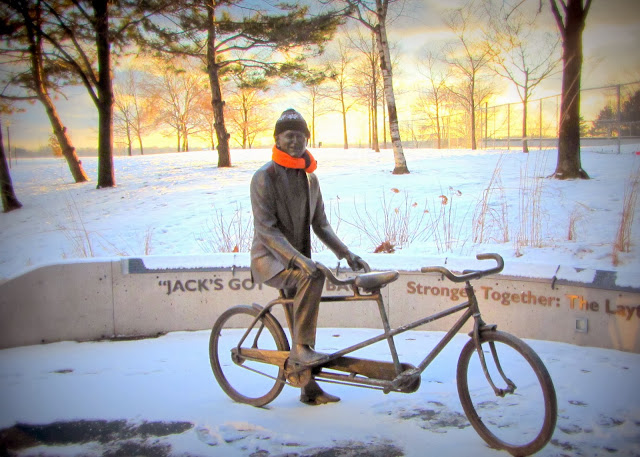 Even in the midst of this seemingly never-ending Canadian winter.

But of course, I don't want to sound TOO brilliant eh? Just because I beat the entire MSM to the voter suppression story. Ahem.

Because I do have a couple of natural advantages. I know bullies, I have fought them before, and I know you can DESTROY them.

And of course being of the rowdy rebel Scottish persuasion, all I need when I'm feeling down is to hear the sound of pipes and drums and I'm ready to fight the WORLD.

And the Cons are mice at my feet.

So my message to you tonight is this one:

Can you believe those bastard Harperites who would produce excrete a so-called Fair Elections Act which is really a plan to DISCOURAGE people from voting? 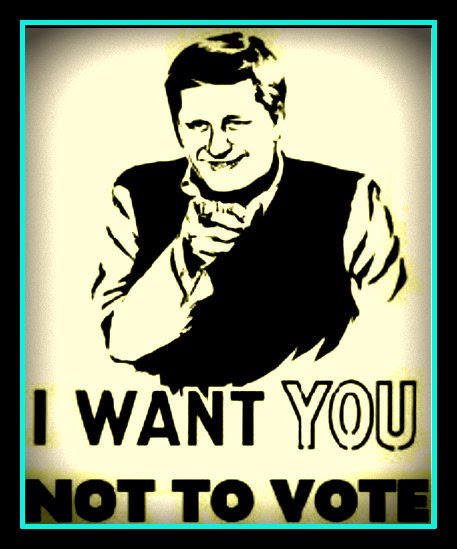 Is he CRAZY EVIL or what?

Is that not MADNESS?

Excellent work, Simon. My sincere hope is that the exact opposite of what the cons want happens and 10,000,000 young people, fed up with the con crime cabal, show up to vote anti-con in the next federal election.
Cheers

250 pages Simon of complete and utter bullshit. For about 90 years Elections Canada managed elections just fine, with voter fraud about as common as unicorn sightings, UNTIL it began to investigate Harper CON election fraud and vote suppression by way of robo calls sending non Conservatives to fake voting stations, THEN it becomes a problem because the 'law and order tough on crime and punishment CONS ironically got all up in arms about Elections Canada following the law. So tired of obstructing the robo fraud investigation into calls that lead directly back to the CON data base, these corrupt assholes virtually take Elections Canada over, instead, making it accountable NOT to parliament but to whatever or whoever CON puppet Canada's dumbest Justice Minister ever Peter Copter Mackay decides upon, so they can whitewash all investigations into their repeated election fraud offences letting them get away with corruption with inpunity and in perpetuity.

And as you say while rigging the deck to make union contribution support illegal while opening the door to widespread corporate donor corruption.

While using the extremely rare if ever 'voter fraud excuse' as reason to Karl Rove the ID rules to suppress the vote of the young, students, infirm, marginalized, disabled, the poor and the elderly poor; the people who do not traditionally vote CON, when in reality voter fraud is not the problem - CON election fraud is the problem.

Nothing but a contemptible fascist move to steal the 2015 election, period, brought to you by Putin Poilievre who represents Alberta firewall séparatistes and the Tom Flanagan Calgary school Reform bible based on extremist right wing American Republican politics. It bodes not well for Canada at all and it normally might not have a chance of getting royal assent until after 2015 election, but since the Gov Gen is a Harper plant, we're also fucked for that.

What is happening with JP Kingsley? I was surprised that he had apparently given the Cons Election Act an "A- " (i.e. A minus). Either the guy is losing it, or he must have read a different version of the act, or was he basing his comments on the claims of Pollievre without actually reading the document? Kingley's approval would put him in the same company as the Sun Media people who, as expected, have enthusiastically given this a thumbs up.

For a start, placing the investigative arm of EC under the DPP who is appointed by the Justice Minister obviously puts the former under the control of the government (specifically, Dear Leader) instead of Parliament as it now stands. How could Kingsley find this acceptable? In addition, several MSM journalists have summarized the other contentious parts of the proposed changes very well (Maher and McGregor at Postmedia and McIlveen at Chronical Herald), including the point you highlighted in this post about making it more difficult for some people to vote. Again, how could Kingsley be OK with this, knowing as he must have, that voter turnout has been declining?

Too bad that someone like Kingsley could have sent a very clear message about the contentious changes being proposed but instead his comments will now be used by the Cons to claim that their changes are good for democracy.

Yup, sometimes it is sad to see that people like Kingsley for whatever reasons either fail to call it as it is or

So, Simon, I just watched the voting in Parliament to limit the time to discuss the above Election Bill. Our gallant reformer, Michael Chong, voted with his party to pass the above. Does not surprise me of course. Chong voted to pass the Omnibus bills as well. A Con is a Con is a Con.

you read it? my kilt off to ya

If you want to Stop Harper, your best bet is to start calling and e-mailing Senators.

There is no way that this monstrosity is not going to pass the House. Harper'll ram it down our throat.

But the Senators... well... they are looking for a reason to become relevant in the eyes of Canadians... and what better way than giving the Senate the chance to be the champion of the people on this bill.

The Senate can stall it, study it to death, make amendments, and send it back.. making sure that this does not pass before the next election.

This... or Elections Canada going to court to get an injunction to stop this... are about the ONLY plays we have.

I encourage everyone to sign up and next election make sure you damm well vote!!!
http://you.leadnow.ca/petitions/stop-us-style-voter-suppression-from-becoming-law-in-canada

A day with three outrages, a slow day in Harperland
http://www.huffingtonpost.ca/2014/02/07/canada-revenue-audit-green-charities_n_4742151.html