Why the CBC Should Fire Rex Murphy Immediately I recently found out that in addition to his gigs at CBC Television, CBC Radio, and the National Post, he also moonlights as a shill for Big Oil.

A words-weary audience jumped to its feet with an enthusiastic ovation for broadcaster Rex Murphy after he urged pipeline builders Friday to stop being ashamed of the multibillion-dollar projects they are trying to build.

But who knew that being an oily prophet, could be so profitable?

If you Google the heck out of Murphy's name, you'll discover that he's Newfoundland's most eligible keynote speaker at oil, gas and mining industry events all across the country. Since 2009, Murphy has been spotted or booked at the podium as a keynote speaker not once, not twice, but at least 25 times.

It's impossible to know how much Murphy has collected in fees at these speaking engagements, but fees for high-profile speakers can range in the many thousands of dollars (plus expenses) a pop.

What we do know is organizers and sponsors of these events include major corporations and industry groups with investments in oil and gas projects across Canada. 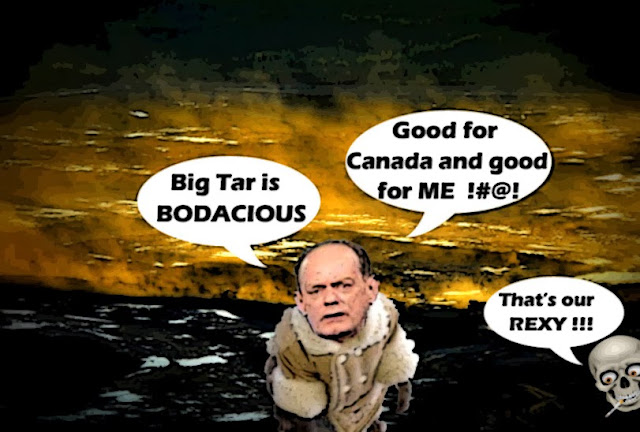 And of course what I want to know now is why is he still the editorial voice of the CBC's flagship news program The National? And why hasn't he been FIRED?

No respectable news operation in the world would accept such a shill, and denying climate change at a time like this is practically criminal. I mean they might as well hire a PR flak from Exxon to comment on the news. It would be more honest.

And if that wasn't bad enough I recently found out that the shabby Con stooge has a long and shameful record as a nasty little homophobe.

For here he is, in the Globe and Mail in January 2005. Arguing that the government should invoke the notwithstanding clause to deny gay people their human rights.

When I read of Cardinal Aloysius Ambrozic's argument to the Prime Minister that the notwithstanding clause should be invoked to stay the enactment of same-sex marriages, I recognized his position as being within that circle of moderation and calm that is almost ritualistically held out as a model of the Canadian way After all, an urging to use the not-withstanding clause to allow for a period of study and to gauge the social impact of same sex in the other jurisdictions that have enacted it, is neither radical nor incendiary.

We're in an age when, on social issues, some people feel a constraint, by no means healthy in a democracy, when ranging themselves against what looks to be "advanced" or "progressive" positions. Political correctness is sometimes a subtle censor, and sometimes a cudgel.

Making religious institutions sound like victims, when if you were a gay Canadian at that time you were the victim, and Murphy was using his bully pulpit as a cudgel to bludgeon YOUR human rights.

And here he is as recently as last year, defending "the truth" of Bill Whatcott, the ghastly anti-gay bigot and anti-choice fanatic.

You know this freaky weirdo, who once sent a turd to the Governor General. 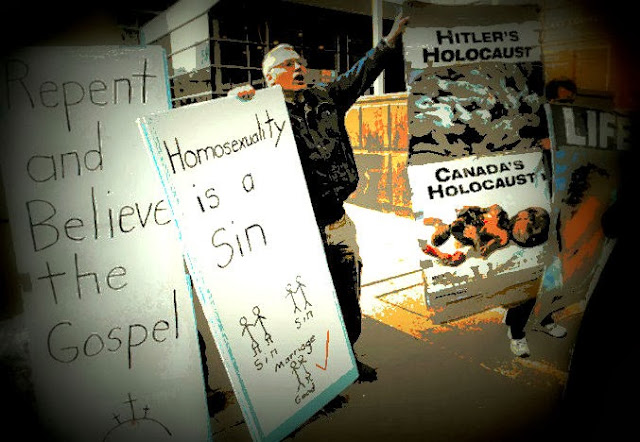 Canada, land of never-speaking-ill-of-a-marginalized-group free-ish speech. You can say what you like in Canada — to yourself, in a low voice. According to our Supreme Court, free speech is secondary to the right not to feel offended.

The term “self-esteem” might have been foreign to Montaigne and Bacon. But they would have lamented how self-esteem — or its group equivalent — now gets more play than truth. There’s a fair dollop of therapeutic chatter in the Whatcott ruling, a resort to vague nostrums, such as the idea that “hate speech” might “oppose the targeted group’s ability to find self- fulfillment?”

So might bad weather, or bunions. What, really, is that phrase supposed to encompass? Moreover, how can group “self-fulfillment” be measured? Is self-fulfillment a legal right?

When in fact "self esteem" and "self fulfillment" in this case meant the right of gay kids not to be subjected to that horrible man's filthy hatred. The Supreme Court upheld Whatcott's conviction.

And what it shows is that Rex Murphy has never changed his stripes. And is still attacking the Supreme Court for having the nerve to grant gay people their human rights. 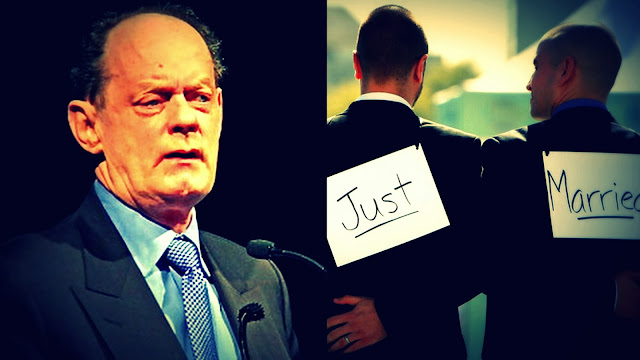 Then there was his recent assault on atheist soldiers which once again revealed him to be not a commentator, but a crackpot.

Let's be clear. Rex Murphy is arguing that if you are a soldier who does not believe in God that you do not deserve access to a counselor as you risk your life to preserve his liberty. You simply ought not to need a sympathetic ear or calming word from someone trained in providing them as you lay wounded or dying -- and if you do, well, isn't that just proof that your atheism wasn't as strong as you'd claimed?

Where once there was depth, now there is demagoguery. Where once there were thoughtful attempts to get at the truth for its own sake, now there are easy, loosely related lines strung together into articles with no discernible overall point. This decline is not dignified.

And all of this to me is the absolute limit. For it's bad enough that my tax dollars are subsidizing a climate change denier, a shrunken shill for Big Oil. A grubby oil pimp who recently went after Neil Young in such an appalling manner, without revealing his oily connections.

But subsidizing an unrepentant homophobe and a religious fanatic as well is simply intolerable.

Especially coming from a network like the CBC that employs other ghastly right-wingers like Kevin O'Leary and Don Cherry.

What is the incompetent cabal running the CBC thinking? Why are they pandering to the right so blatantly? Why is Rex Murphy still the editorial voice of The National? Is Peter Mansbridge, who doesn't have a single left-wing voice on his "Most Watched Panel," protecting him?

Is the CBC trying to drill for Big Oil dollars like Postmedia is doing?

Or as I wondered the other day, is it now the Con Broadcasting Corporation?

Or the Stephen Harper Network...

And when will the CBC finally understand that if progressives abandon it, it will be done like dinner?

For nothing they do to pleasure the Cons will stop them from trying to MURDER it.

Yup. This shabby farce has gone on long enough.

The CBC must start acting like a responsible public broadcaster.

And Rex Murphy must be fired immediately... 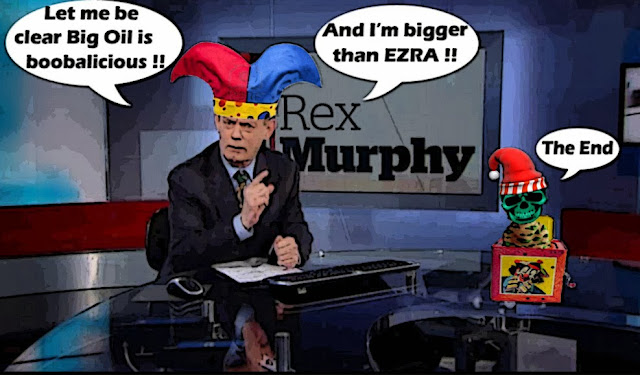 Hi Simon The board at the CBC has been stocked by Harper with those who will do his bidding. What their mission is, is to set the conditions for privatisation,

So we'll see much more of the likes of Murphy O'Leary and Cherry in an effort to drive away the CBC's traditional support.

They are very effective at driving people away. They're repulsive.

Simon: I agree that CBC should fire Rex because of conflict of interest (apparently shilling for big Oil while appearing to give his comments as an objective commenter).

Unfortunately, it ain't gonna happen. In fact, CBC has apparently already been taken over by the Harper Party. Have you noticed that they have either disallowed comments or closed commenting really fast on stories that are really critical of Harper or his party? From personal experience, they have disallowed even my comments that have asked what is happening to the commenting policy on CBC.

Sad, but the other commenter who suggested that the CBC has been stocked with people who will Harper's bidding likely has a point.

hi Kev...I never thought of it that way. But if their plan is to drive viewers like me away it certainly is working, because I can stand any of them. Just the sight of them is enough to make me fly through the air to retrieve the remote control and turn them off. But I am a big supporter of public broadcasting, so I am disappointed. And the more I read the CBC President's message to the troops, that I mentioned in a recent post, the more I fear a corporate takeover. And I'll never forgive the Cons for cutting the budget of the CBC and my beloved NFB. As far as I'm concerned we can't spend enough money promoting our own culture....

hi Thwap...I tried to think which one of those three repulses me the most, but in the end I couldn't. They all disgust me equally. Every one of them is a perfect example of the worst this country has to offer.How low we have fallen...

hi anon...I hadn't noticed that they were shutting off comments on critical stories about the Harper gang. But sadly I wouldn't be surprised. It's clear to me that they are pandering to the Cons in the vain hope that they will be spared further budget cuts. And Kev is right, they have taken over the the CBC board, and the ghastly Bill C-60 gives them even more control over the corporation. The CBC has become hideously flawed but it's still one of our greatest cultural institutions, I wish them only the best, and I'm still hoping we can save them by defeating the Cons in the next election...

I haven't watched TV for years, and don't miss it a bit. Been a big fan of CBC radio all my life, but less so recently. Listening to Murphy host Cross Country Checkup is beyond infuriating. He is rude, interuptive and will not tolerate any criticism of the Harper government.

I too was censored by CBC for commenting on their comment policy. Now I am allowed again but there seems suddenly to be abundance of just plain stupid commentary on those stories where it is allowed. Maybe they have made a deal with Pierre Putin.

You can deffinitely see Rex's Right Wing bias on Cross Country Check Up. Those who state progressive views will find themselves arguing with Rex while Right Wingers are left to pursue their thoughts.

CBC cannot get rid of this Newfie jokes because he's unionized.
It's even worst when you think that you save his butt with your hard earned taxes money.

Your argument is deficient in so many ways. The CBC needs to be diverse. I suspect you would say likewise but I suspect it’s a bit on the one-note side. But cheer up the CBC is now much more diverse then it used to be and probably in a way that you like.