The Day Rob Ford Was Exposed as a Bestial Bigot 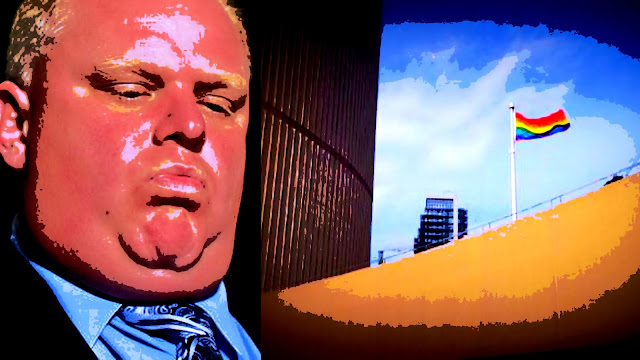 When I went past Toronto's City Hall today I was happy to see the beautiful rainbow flag flying, like it is in so many other Canadian cities from St John's to Vancouver.

As a gesture of solidarity with the brutally oppressed LGBT people of Russia.

So you can imagine how angry I felt when I learned that the Con hog Rob Ford had tried to take it down.

Toronto Mayor Rob Ford is being called homophobic after he took exception to the flying of the rainbow flag at city hall during the Olympics, saying the games are about “being patriotic to your country” and not about “sexual preference.”

And had caused an unseemly ruckus by shooting his big crack mouth off.

And strangely enough all I could think about, was if I had waited a day I could have saved myself the trouble of writing this post. 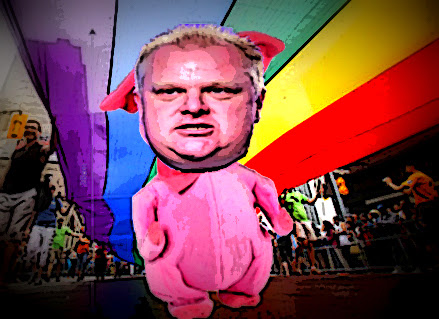 Where I attempted to prove once again, that Rob Ford is a disgusting anti-gay bigot no matter what him or his brother Doug say.

Because today he proved it HIMSELF, beyond all doubt, as councillor Kristyn Wong-Tam pointed out this afternoon:

“I believe Rob Ford is letting it all hang loose,” Ms.Wong-Tam said. “I think he is clearly demonstrating that he is homophobic, that he is bigoted.”

Ms. Wong-Tam said cities from Vancouver to St. John’s are flying the rainbow flag during the Olympics. “It doesn’t take anything away from Canada. It dovetails into the Canadian values we already know, which is standing up for human rights,” she said.

So tonight I don't have anything more to say. I'm too tired after a brutal week to write another long post on the same subject.

Except to thank all the good Canadians who even in the excitement of the Olympics, haven't forgotten those brave LGBT people who are fighting for their lives in Putin's Russia.

Including these who were arrested today...

And who after being beaten and threatened with sexual assault, were reported to be still singing in their cages.

I also want to give special thanks to the mayors of St John's and Vancouver for leading the charge.

And to Ottawa mayor Jim Watson for showing how a real Canadian mayor behaves...

And as for the ghastly bigot Rob Ford all I want to say to him is, thanks for proving me right.

Thanks for revealing your inner hog... 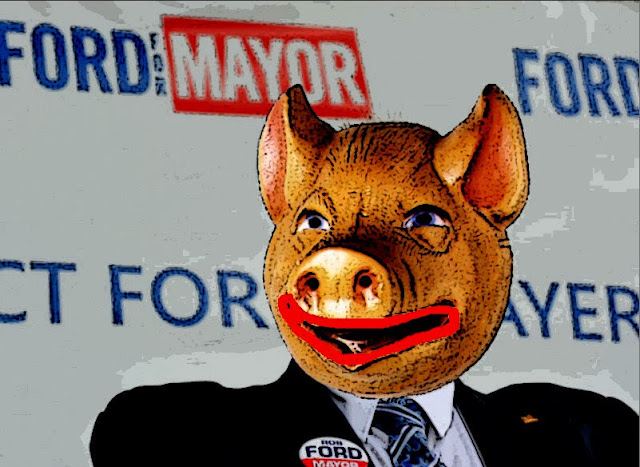 The one I always knew was there from the day you were ELECTED.

And thanks for motivating me to work even harder to defeat you, and your buddy the stealthy homophobe Stephen Harper.

Who will wear you like a bra or a shroud... 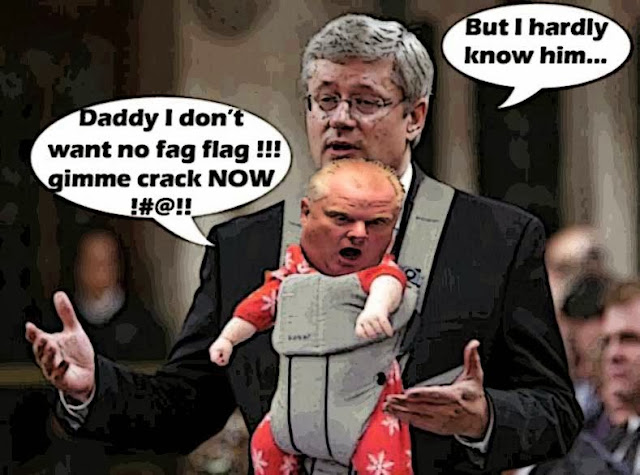 Until the end of his term in office.

The force of the rainbow is with us now, so we can't lose eh?

And sooner rather than later.

You will BOTH go down together... 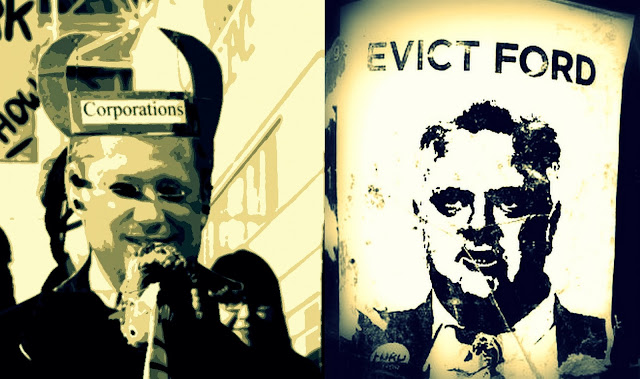 He is trying to keep his name out there by playing the fool. This can't be for real?

I'm just enraged, not so much at this sorry turd, as by all his enablers. Of course he's a bigot and a bully. Hope this clip from the Guardian about a Geordie artist's solidarity will brighten your day a bit: http://www.theguardian.com/world/video/2014/feb/07/sochi-winter-olympics-street-art-protest-russia-anti-gay-laws-video

hi Kev...thanks for the clarification, but really how many people these days talk about "sexual preference." As if you choose to be gay. The right word is orientation, and the man is a homophobic beast. I'd be harsher on him if I didn't see him as a man with a very serious drug problem who should seek help immediately. And who I wonder will help us get rid of him? Where are the police when we need them ???? ;)

hi anon...yes he is doing everything to try to stay in the public eye. Just about all he does these days is turn up at any event where there might be a camera. I also understand that his brother Dougie has hired an ad agency to try to make the two of them look good, and that the ads look suspiciously like the ones the Harper Cons bombard us with. Good luck with that one...

hi lagatta...thanks for the link, I really like that mural. The one good thing to come out of these Olympics is all the support it has gathered for the LGBT people in Russia. Every small act of solidarity moves me enormously. Hopefully the Russians will understand if they want to be seen as a modern advanced nation they have to get those hairy religious fanatics out of politics. Because that's the real problem. Putin is catering to them, and his small man insecurities, and the outrageous decision to let neo-nazis roam freely in a country where 20 million were killed by the Hitlerites is taking the country down the toilet. Or should I say TWO toilets... ;)

When I saw Ford on t.v. giving his "opinion" on the lovely multi coloured flag, I just laughed and laughed and laughed. he looks like a complete idiot. It couldn't even be taken seriously. Like how stupid is this guy? How out of touch is this person?

While other Mayors, and some provincial governments. were putting up the flag , he wanted it down and then put a Canadian flag in his window. Guess he doesn't know that there are a lot of LGBT people who are patriotic Canadians who not only are politicians but give the ultimate patriotic gift by fighting and dying in wars for Canada.

I cut him slack for his addiction issues having been there myself but that does not mitigate his bigotry one iota. Even absent the addictions he would still be a bigot

The only contemporary flags I find as pretty as the LGBTQ rainbow flag are the "rainbow country" South African flag... and the Italian PACE rainbow flag (the colours are slightly different from the LGBTQ one, and I've seen people waving both in demos there).

I know someone who got serious death threats from neo-Nazis when in Russia. Can't provide more info here... But they terrorize anyone who isn't a straight, Orthodox, ethnically Russian person.