It's hard to imagine a more outrageous performance in a Canadian parliament, or any parliament, than the one the Con MP Brad Butt offered up the other day.

By first announcing that he had "personally witnessed" people picking voter cards out of the garbage, and using them to commit electoral fraud.

And a few days later admitting he LIED.

But unfortunately for our democracy there is more than one Con clown. And the latest Con clown show stars Peter Van Loan.... 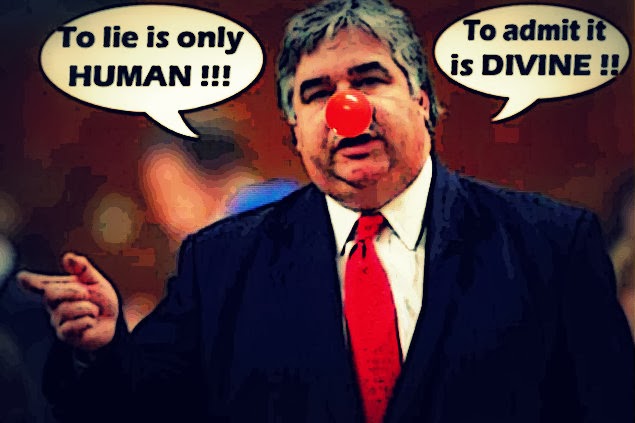 Who would dare claim, as only he could, that Butt shouldn't be held in contempt of Parliament for blatantly lying, as the opposition is demanding.

He should be PRAISED for correcting the record.

As everyone is, I am sure, aware, the presumption in this House is that we are all taken at our word, that the statements we make are truthful and correct. That we are given the benefit of that doubt brings with it a strong obligation on us, in the cases where a member misspeaks, to correct the record so that nobody is left with inaccurate perceptions.

In this particular instance, the member for Mississauga—Streetsville, has done exactly that. Having misspoken in this House and having realized his comments were in error, he has come to this House and corrected the record.

Without mentioning that the only reason Butt fessed up was because he was busted.

A Conservative MP’s retraction of a claim he witnessed voting fraud came after a formal complaint to Elections Canada.

Or even hinting that the reason Butt lied so blatantly, was to make it sound like voter fraud is so widespread we need the voter suppression bill aka the Fair Elections Act, that the Cons are ramming through Parliament.

Just like that other Con clown Pierre Poilievre has been trying to do... 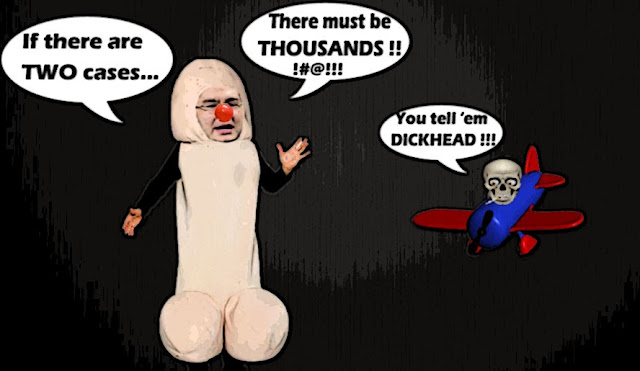 By claiming there were THOUSANDS of cases.

Even though after extensive research by the Con Ministry of Democratic Reform aka The House of Poutine, he was only able to come up with the sorry case of these two clowns.

Two Montrealers have been given a slap on the wrist for taking part in a voting hoax that was featured on a popular French-language comedy show. Laura-Emmanuelle Gagne and Simon Poulin each received an extra voter information card prior to the 2011 federal election.

One was for their own electoral district and another was for a neighbouring district. They cast a ballot at two different polling stations to prove a point, with both spoiling their second ballot.

Which normally would have won Poilievre the Con Klown Award of the Month, had it not been for Tubby Van Loan's even more ridiculous performance.

Which I'm sorry to say you really must see to believe...

For have you ever seen anything more oily or outrageous?

But of course, they may be Con clowns, but they are trying to steal the next election, like they tried to steal the last one.

They are the enemies of democracy. We must do whatever we can to stop them.

Tony Clement and his con-generated 'evidence', that told us we didn't need stats canada information, 'cause that would mean, like, knowing who needs help and why...must be too close to "sociology"...truly representative ot the way cons roll. Nigel was honourable too, people!!

.. the buffoonery of the Butt/Van Loan/Poilievre flaming lie is etched permanently into the tapestry of Parliamentary history. A stunning sample of how The Harper Party 'values' have never been, nor ever will be.. the values of real Canadians

Poilievre keeps repeating the mantra: "there are errors with one in six cases of voter information cards that are sent out". He implies that 1 in 6 errors = 1 in 6 are fraudulent voters.

What exactly does his statement mean? How is "error" being defined? If a person's first name is Alan and the voter card says Allan, that would be an error. But would it follow that this person doesn't exist? Of course not!

Poilievre: Mr. Speaker, the fact that a comedy show could execute this kind of fraud is evidence of how easy it is to carry it out. He makes a joke out of the whole process when he refuses to acknowledge what Elections Canada said, that there are errors with one in six cases of voter information cards that are sent out, which are allowing people to vote more than once or in ridings in which they do not live. There have been documented cases of violations in this regard. We are putting an end to it.

Fuck you simon you useless piece of communist shit.as for the ukrane, its about time Russia took back whats theirs.