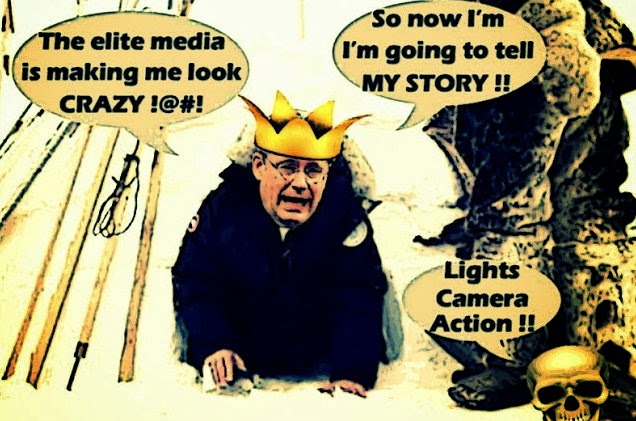 I'm sure you remember how just over a month ago Stephen Harper set out to make his own propaganda movies.

By making us pay to make him look good.

With a weekly round-up of Great Leader's activities that resembles something you might encounter in a state like North Korea.

Well I'm happy to report that the Harper Show is an absolute and total BUST.

The debut gained enough attention to draw over 10,000 viewers of the English-language version, which dipped to under 8,000 in the second week, under 3,500 in week three — which featured Harper’s high-profile delegation to Israel, which also had its own special edition, with roughly the same viewership — 2,220 for the fourth round and just over 1,000 for the fifth.

So, the interest among Canadians to see the PM’s version of events is on trend to drop about half from one installment to the next.

A dog if ever there was one, that is barking like a chihuahua.

And falling to earth faster than a speeding meteorite. 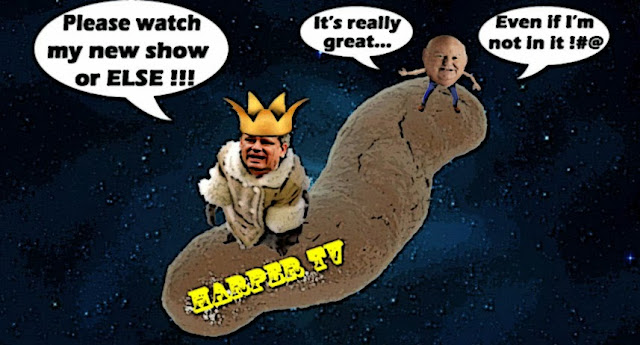 A show so stinky it makes Sun TV look good.

A walking talking catastrophe, a tacky production even Bonhomme can't save... 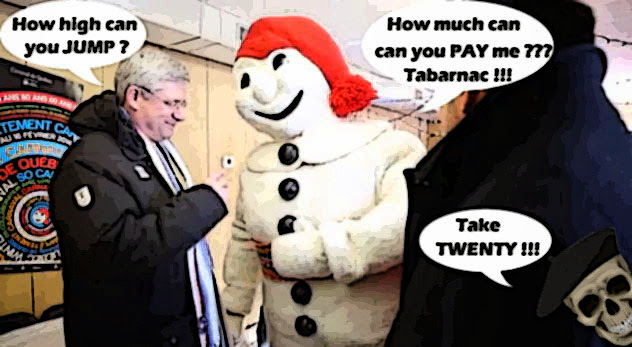 No matter how high he jumps.

A show that should just about run out of viewers by the end of next month... 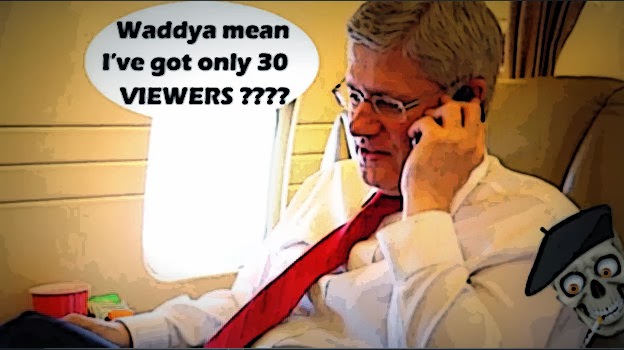 And leave most Canadians angrily demanding to know when will it be CANCELLED?

And how much are we paying for that shameless propaganda show?

Which no doubt explains why they are now giving Laureen Harper a starring role... 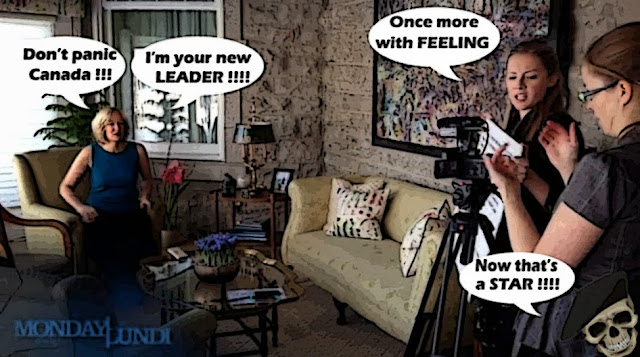 Just like that leaked secret memo Dimitri Soudas prepared said they would.

Even though it won't work, and all it shows is how DESPERATE they are.

Yup. It really is getting close to the end of this bad movie called Harperland.

And I can hardly wait for the final scene, when the crazed Stephen Harper comes down the stairs.

Like the crazed character played by Gloria Swanson does in the classic movie Sunset Boulevard.... 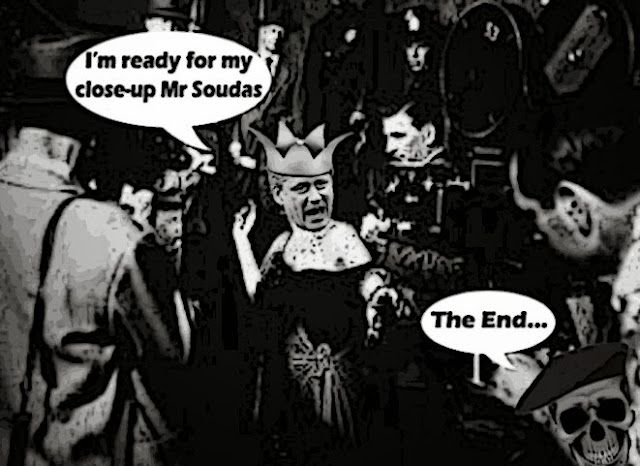 Before the lights go out for the last time.

The police move in.

And that ghastly show is finally OVER...

I haven't watched any of this sillyness but I have wondered how much camera time the wife is getting.

Nothing I have seen in the past decade makes me think that she has either a comfortable media presence or much affection from Canadians. The backroom boys choosing her face ( unelected and unaccountable) to sell their neocon agenda surprises.

now that was funny! It's not funny that they would use thousands of tax dollars to do this.

Harper is the one and only Canadian PM ever, to be held in contempt of Parliament. Harper behavior is so bizarre at times, I wonder his sanity. Harper is so repulsive and has not one saving grace, how can any of his team support him? They are just as bad as he is

Keep an ear on the meeting of the 3 Amigo's.

10,000 people watched the first one! Considering how many of those were curious harpercon MPs, and PMO staffers checking-in again and again, even the first installment was a dud.

I know that I'll be working hard to get stupid dumb-fuck John Carmichael defeated. Hopefully, even fraud won't save them this time.

hi peacekeeping veteran....the Harper Ford show? I like it, sort of like a modern Laurel and Hardy show. With Ford getting drunk all the time and Harper wringing his hands and saying "Oh Ollie...I mean Robbie."
But yes, the 24/7 show is just another Porky Action Plan, paid for with OUR money...

P.S. I'd like to take the opportunity to thank you and all the other peacekeeping veterans for upholding the best principles of this country, and making me proud to be a Canadian. The way the Harperites have disrespected your legacy is something that makes my blood boil...

hi rumleyfips....I watch that crap so you don't have to, but yes there is no doubt that Laureen Harper is being groomed to play a big role in the next election campaign. She has always maintained a dignified distance from politics but not any longer. I suspect she is being pressured into her new role, but she seems a strong enough woman to say no, so there is no excuse...

hi Ricky...I'm glad you found it funny, I do my best to mock them, it's my weapon of choice. But you're the amount of money they are spending on that outrageous propaganda effort isn't funny. Taking a video crew with them wherever they go, and I notice paying for Olympic footage in the latest one, must have cost them at least a couple of hundred thousand dollars so far. They really are shameless...

hi anon...I wonder how many Canadians remember that he was found guilty of contempt of Parliament. If they had made him pay for that at the time, we could have avoided so much damage. And don't worry I will be watching the Three Amigos. I see it's shaping up as a real disaster, and I already have a sombrero for Harper... ;)

hi thwap...I have to believe the first numbers came almost exclusively from the PMO watching the video over and over again, which I must say is their just punishment. I think the Cons were hoping that small TV stations would run that crappy propaganda, but it's so bad I doubt anyone has used it. And yes please get rid of that wretched car salesman Carmichael. If I recall he only won by a few hundred votes, so hopefully you will be successful....

Is this a competition with the Trudeau family? While Mrs Mulcair turns out to be the most interesting woman.

Vid ~~> I strung 2gether all of Harper’s most awkward moments arriving to meet Bibi in Israel http://youtu.be/yZxL1vsd4Q0 #cdnpoli 2min #waddle

Vid ~~> Harper rounds a corner (Israel Jan 2014). When he spies the cameras, he jumps to grab Laureen’s hand http://youtu.be/EkpROGLFUr0 #cdnpoli

she'll go along with the plan because if her husband is not re-elected she is stuck with him 24/7. Not a pleasant thought for any one. she will have to give up the lovely large home,in which she can mostly avoid him. she won't have him traveling else where, so she can be home alone. She would have to look at him for all 3 meals. now wouldn't that take care of the appetite. then there is the personal loss of the status of P.M.'s wife. Right now that gets you a few perks. Having to work on the campaign and get him re-elected or not working on the campaign and having him home full time, what would you do?