Stephen Harper and the Insane War on Unions 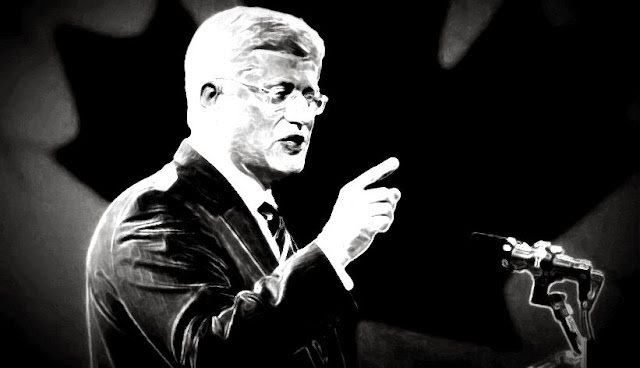 When I think about what historians will say about the rule of the mad king Harper and the lost years of The Great Darkness, I think it will probably be something like this:

Canadians had never seen anything like him, so they didn't recognize the danger, and by the time they did it was too late. He had numbed them, or muzzled them, into a state of paralysis.

For although he was totally insane, there was method to his madness.

And it was contagious.

For there was the lamentable bully Julian Fantino today, blaming his problems with Canada's veterans, not on himself but the unions.

"It all goes back to a huge amount of misinformation, miscommunication and also mischief-making that I attribute to very directly to the Public Service Alliance of Canada," he told Newstalk 1010.

"I would be agitated too if I heard some of these lines that they've been putting out," Fantino added. "I feel badly for the veterans. They've served their country; they don't need this added aggravation."

As if the veterans were children.

The union, which does have a stake in all this, paid for veterans travel and accommodation in Ottawa for a meeting with Fantino, which the minister missed, then, with cameras rolling, left an acrimonious discussion with them, turning his back on men proudly wearing medals on their chest.

To suggest they are merely dancing to their union puppet masters just heaps more insults on the veterans.

And he hadn't treated them so monstrously... 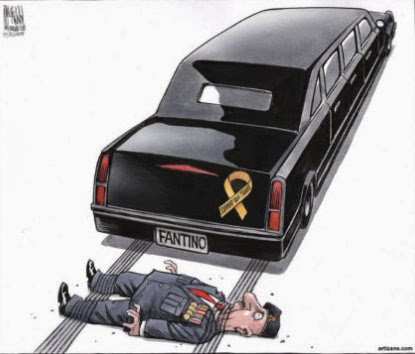 And if you thought that was a cruel farce, then there was the scary spectacle of Pierre Poilievre today announcing what the Cons are calling the Fair Elections Act.

The Conservative government will introduce changes to the Elections Act this week that caucus members expect to restructure the office in charge of investigating violations.

Poilievre did not respond to requests for more information on the weekend, but he sent several tweets about the bill. “We will make it easier to vote and harder to break the law,” said one. 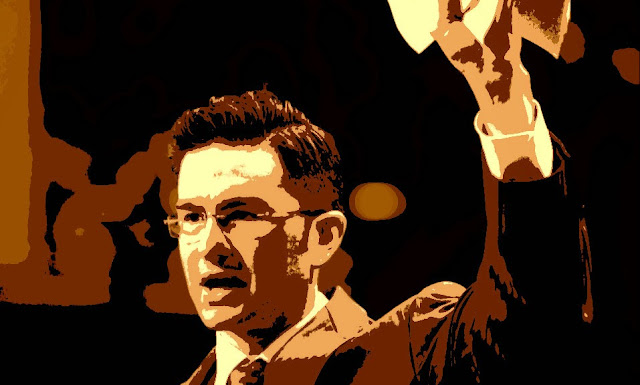 From the man who once ran a robocall company, from the Cons who brought us the robocall scandal, a plan to "strengthen" the enforcement powers of the Chief Electoral Officer Marc Mayrand, by taking them away from him.

Under the Elections Act as it now constituted, Mayrand appoints the Commissioner of Canada Elections, the official in charge of investigating and prosecuting Elections Act violations. Any reorganization that would give the government more control over the enforcement branch may raise objections from opposition MPs.

And placing them under THEIR total control.

In a "Fair Elections Act" which judging by this ominous tweet also includes plans to go after unions.


We will close loopholes to big money, and give law enforcement sharper teeth, a longer reach and a freer hand.
— Pierre Poilievre (@PierrePoilievre) February 2, 2014


Because that's what Big Money means to them eh?

Not the money of Big Business, who as the King of Muskoka, Tony "Gazebo" Clement  made clear today, the Cons will do ANYTHING to pleasure.

I am pleased to announce that today the Government of Canada has introduced new legislation to enshrine the One-for-One Rule in law. 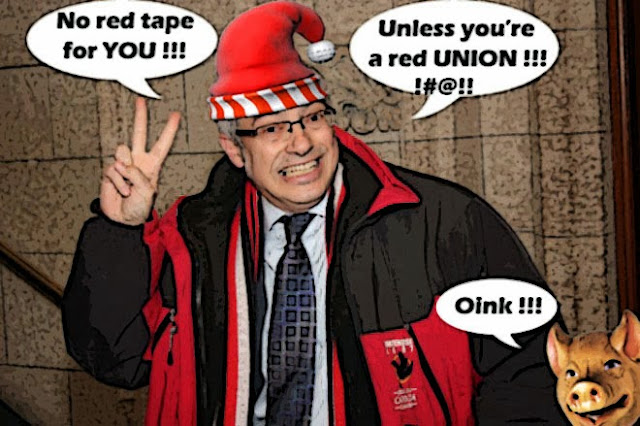 By arbitrarily eliminating government regulation of business, while increasing the regulation of unions with their infamous anti-union bill C-525.

And to understand where all this is coming from all you have to do is look at who is in SIXTH position on Stephen Harper's porky list of most active lobbyists. 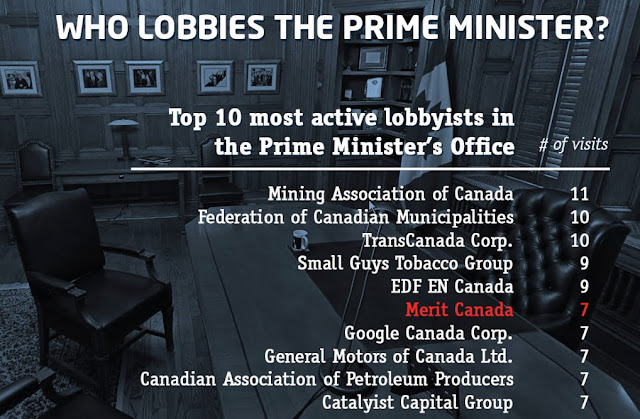 And what does Merit Canada want?

Oh boy. You know I don't expect most Canadians to watch the Cons as closely as I have for eight long years.

But historians will never be able to understand why so few could see the Big Picture, and so many were so blind for so long.

But it WAS The Great Darkness. 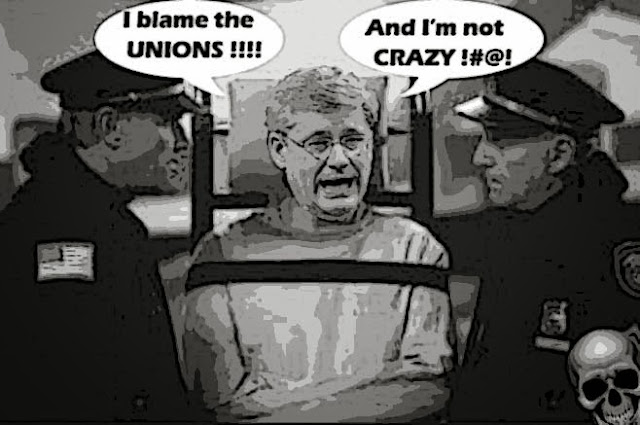 The Cons WERE monsters or munsters... 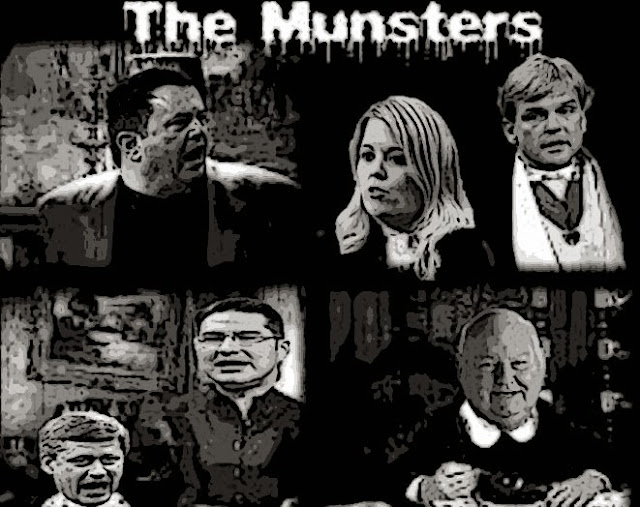 And it WAS madness...

Regulations are put in place for good reasons, in the interests of Canadians. They can't just be removed arbitrarily.

Hugh, I've got a news flash for you, yes they can be removed arbitrarily. Just watch the Cons do it. They have a majority government.
,
Fatino's decison to attack the PSAC was a good move. it takes the heat off of him, and some may actually believe him. Its called move the ball out of your own court.

They want rid of the unions so they don't have national organizations to oppose the Cons. Unions have money, organizers, communication networks, fund some social groups, provide scholarships, etcl. This is very dangerous to the Cons. In their opinion, to attain their own goals, unions need to go and the PSAC is one that really needs to go, in their minds. they want all government works to be loyal Consters.

If a regulation is removed by the gov't it is for one of two reasons.
1) The regulation was unnecessary.
2) The gov't is removing valid regulation and are thus practising bad governance.

If 1 is true, the regulation should have been gone regardless. If 2 is true, what the hell are they doing? The one-for-one rule is jingoistic and assinine, designed to appeal to all those idiots who see any regulation as an intrusion on their FREEDOM.

It will take a few more Fantino like moves for Steve to see an erosion in his moron base of support. Oh, that and Steve giving another of his inimitable Hey Jude performance. We can only hope...

hi Hugh...you're absolutely right. Can you believe those Cons trying to make a virtue out of killing government? Never has this country seen a worse government or a more rabid group of right-wing extremists....

hi e.a.f....I think Hugh is saying that they shouldn't remove the regulations in such an arbitrary manner. But yes the Cons are spoiling for a fight with the unions, and hopefully it will be one they will lose....