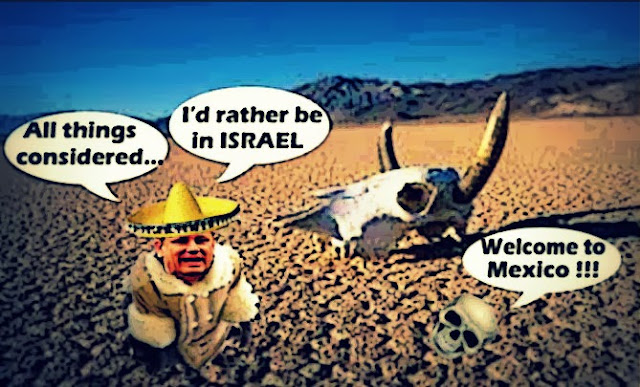 Well I think it's safe to say that Stephen Harper's Great Tiny Tour of Mexico is shaping up to be the most pathetic foreign trip ever by a Canadian Prime Minister.

And he has so little to offer or receive, that he has been forced to resort to desperate measures to occupy his time.

Like hastily organizing his own mini summit with Big Oil. 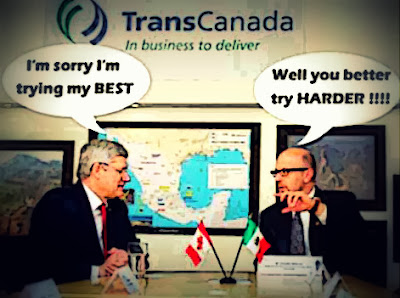 Where he no doubt assured his sponsors he was still their faithful servant.

And that he was STILL going to tell Obama that he won't take NO for an answer.

As he has been doing for months... 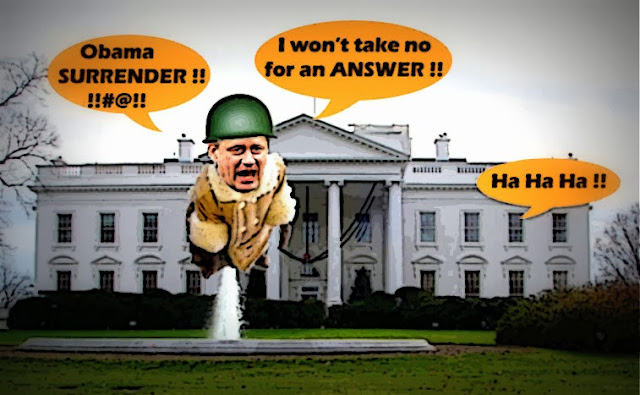 But sadly for Great Pipeline Leader his latest clumsy move to pressure Obama failed like all the others.

Because when the Three Amigos finally met it was quickly apparent that two's company. 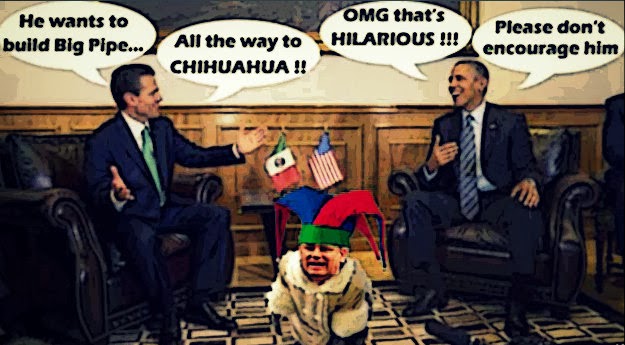 For although Obama was able to put on a cordial front, and restrain his desire to drone Harper, there was no pipeline.

Prime Minister Stephen Harper was again rebuffed in his bid to press U.S. President Barack Obama to approve the controversial Keystone XL pipeline when he raised the issue during a North American leaders’ summit in Toluca, Mexico.

Mr. Obama said he has no plans to hasten the process for making a decision. “Keystone will proceed along the path that’s already been set for it,” he said during a press conference Wednesday evening.

Not in Mexico City. And not in Nebraska.

The hurdles standing before the Keystone XL pipeline project grew ever taller Wednesday as a Nebraska court dealt the long-delayed project another significant setback.

A district judge ripped up a state law that might have been used to force landowners to allow the pipeline on their property.

Which must have left Harper and his tiny tour of oil pimps reeling, or praying up a storm back at the hotel.

Because they are in a desperate hurry to get the pipeline approved, before the signs of the impending climate change apocalypse bury it forever.

And they surely must know that if this apocalypse is as bad as it looks. 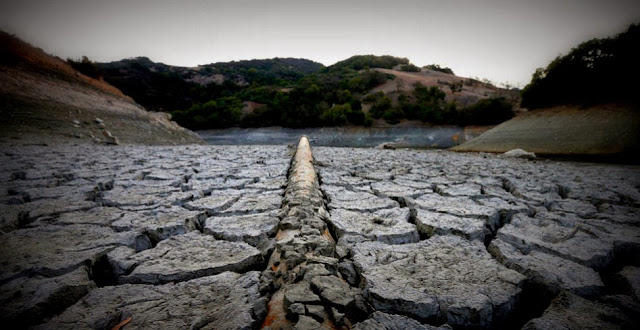 Obama will be able to kill the Keystone project in the name of national security.

Which at the end of the day left our not so Great Leader looking like this... 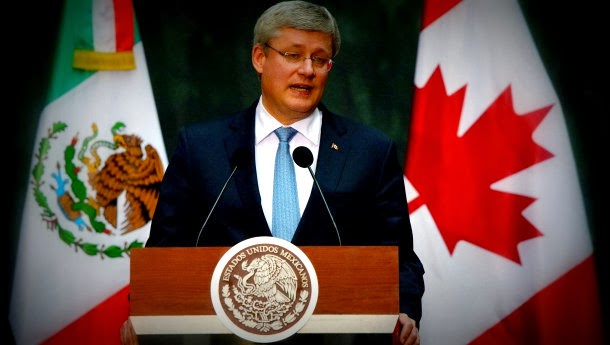 Or as desperate as I have ever seen him.

Getting some friendly advise from a Mexican Senator... 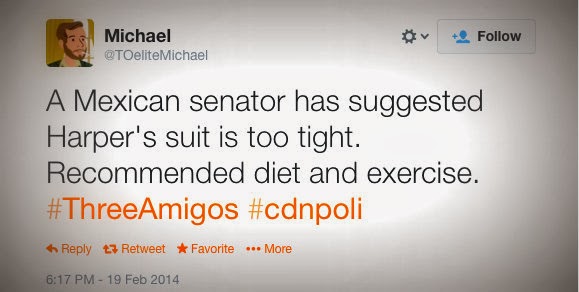 While back home one of his own senators reminded Canadians of Great Leader's total lack of judgment.

Which I think you'll agree was a suitably sordid end to Harper's horrible day in Mexico.

And must have left him shattered, looking back at his record of eight years, like one of those sappy Facebook look backs.

And seeing the writing on the wall...

Or the big thumbs down that will condemn him.

The Day of Judgement is coming.

And his day is almost done...

Simon: As I write this, the shares of TransCanada Corp are down some 2% on high volume despite their just announcing this morning of a significant quarterly increase in earnings of about 30% and an increase in dividend of 4%.

The good financial results, and dividend increase, should have lifted the share price. Therefore, the fall in price suggests that the market must have disliked the double barrel barrage that Keystone took yesterday, the Nebraska court ruling and the public putdown, again, of Great Pipeline Leader by the Big O. The market must have felt this morning that the probability of Keystone being approved looked a little bleaker after yesterday's events.

Putting climate change issues aside, I cannot understand how Big Oil does not tell Great Pipeline Leader to STFU and let the American review process to play itself out (for whatever reasons, political or otherwise).

Harris in a hard hitting article yesterday (http://www.ipolitics.ca/2014/02/17/talk-of-trudeaus-inexperience-little-more-the-conservative-pulp-fiction/) said that Great Leader has an emotional intelligence of "zero". It is very difficult to disagree with Harris on this score since only someone with an emotional intelligence of a child would fail to realize that nothing will be achieved by irritated the POTUS when he has signaled repeatedly that he does not want to hear about Keystone.

Harper is wearing some kind of under armour, probably an RCMP issue bullet proof vest, He must think someone wants to waste a bullet assassinating the asshole.

ya, his suit did look funny, like its bulging in the front. either he has a very bad tailor or he is too fat. Loved the Mexican senator's comments.
Nothing was achieved in Mexico. It was a waste of money. Can't blame the Presidents of Mexico and the U.S.A. for disliking oil can stevie. He's not nice, he's not fun, he's not bright. he just isn't good company.

hi anon...I'm sure Big Oil must be having some real doubts about their man Harper. Because a dispassionate study of his record can only show that for all his bluster and his bullying he's not only got nothing to show for it, he's stirring up trouble where ever he goes. Big Oil lasts to keep things oily and behind the curtain. But Harris is right, Harper has no emotional intelligence. He's a clinical psychopath who lacks certain receptors.That's why he obsesses over polls. Because only the can tell him what he could ever know. And of course the way he has irritated Obama by joining with the Republicans to pressure him is absolute madness. Obama is a lame duck President looking for a legacy, while Harper is a man fighting for his political life, while looking for a pipeline to sell Oil to China. Who do you think is going to win that one?
Hey, if I was a Big Oil cowboy, I'd put my boots on my desk, light up a cigar, and fire Harper TOMORROW.... ;)

hi Ron...is that armour or insulation? But yes Harper is paranoid. I've had the misfortune to see his armoured convoy whiz past me a couple of times, and I swear is bigger and even more sinister than Obama's, which I have also seen a couple of times. I also remember seeing Pierre Trudeau walking up the hill to his home next to the McGill medical building with not a bodyguard in sight. And all I can say is that Harper has neither the courage nor the class to walk in Trudeau's shadow...

hi e.a.f..... yes the stress of all those scandals has caused Harper to reach for the cookie jar again and he has put on a fair bit of weight. But then after this hideous winter he isn't the only one. Ahem. ;)
But yeah it was a pathetic summit, he burned his bridges before he got there, and managed to alienate the two big countries that share the continent with us. Even though the U.S. is our biggest trading partner, and Mexico is also a rising economic giant. As we say in Quebec, more stupid than that and you die...