The Harperland Winter and Pete Seeger's Message to Progressives

Well I have to admit it was a pretty grim week in Harperland. It was really cold and dark in the place where I live, and even the lights on the ferry dock couldn't brighten the gloom.

Not when Lord Harper is back from his bloated junket to remind me how much I despise him and his foul Con regime.

Not when Julian Fantino is going around beating up on veterans, and making me want to put a fist through a wall, I hate bullies that much.

And not when the great Pete Seeger died. Which made me so sad.

So you can imagine how I felt when I read this story.


If everyone who voted in the 2011 election cast their ballots for the same political parties in 2015, the Conservatives would pick up 22 of the 30 seats that are being added in a riding redistribution, Elections Canada calculations show.

It was enough to make me want to stagger out into the frigid cold, dive face first into a snowbank... 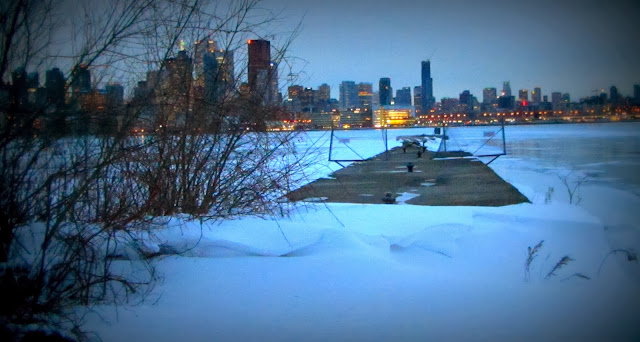 And tell people not to wake me up until summer arrives.

Until I remembered that Canadians aren't going to vote the same way they did in 2011. And that according to the latest polls, Harper and his Cons are down a full ten points since the last election.

Their fundraising advantage isn't what it once was.

And most importantly, more and more Canadians don't believe that he is a Great Economist Leader.

The federal Conservatives are no longer the go-to party when it comes managing the economy, a new poll finds. The poll by Abacus Data, released exclusively to QMI Agency, finds that while a significant number of Canadians still believe that Prime Minister Stephen Harper's Conservatives are best for the economy, many Canadians are just as confident Thomas Mulcair and the NDP or Justin Trudeau and the Liberals could meet any economic challenges.

And without those phony economic credentials to shield him from all the scandals heading his way, they will slowly but surely consume him.

For as this picture from his latest propaganda video clearly shows, all that stress is already taking a HEAVY toll on him... 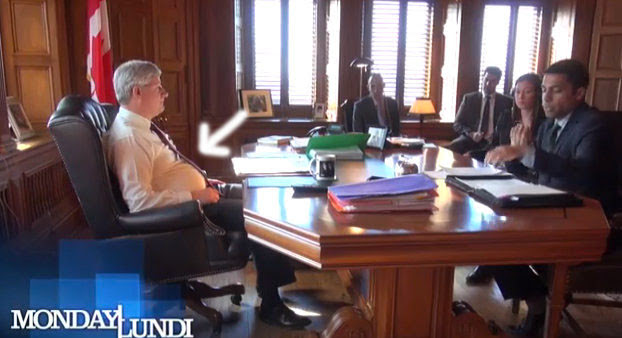 Because if that's as good as his fluffers can make him look you KNOW he's in trouble eh?

And then I remembered the great Pete Seeger. And his message to progressives. 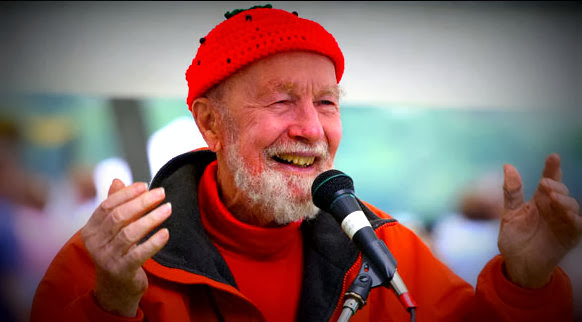 Pete sang truth to power through the epic struggles of most of the last century, for social justice, for civil rights, for workers, for the environment and for peace. His songs, his wise words, his legacy will resonate for generations.

And how he never gave up no matter how gloomy the situation.

Pete Seeger continued singing, for peace, nuclear disarmament and, most notably, the environment. When I asked him to sing We Shall Overcome, he did, saying: "Yes, that is something the human race needs to be reminded of. Don't give up."

And how after a lifetime of struggle he joined the Occupy movement in the streets, even though he had to march with the kids leaning on two canes.

I remembered how I used to play this song, one of the first my old guitar teacher taught me, while preparing to fight the bullies the next day...

And how I eventually defeated them all.

Just like these great Canadians will eventually defeat the bullies who have treated them so shabbily.

And together we will eventually defeat the bullies who stole our country.

So I thought I'd end this post by paying humble tribute to Pete Seeger, and playing this video that I made during the days of the Occupy uprising in this country.

With the Canadian version of one of the songs he made famous.

For as we rose up then, so shall we rise again...

And that IS the message. We are the change.

And if we really want it, we shall have it.

Oh yeah, one more thing. This winter may seem like it's gone on FOREVER

But at least the canal is frozen solid, and the Great Island Arena is back again !!! 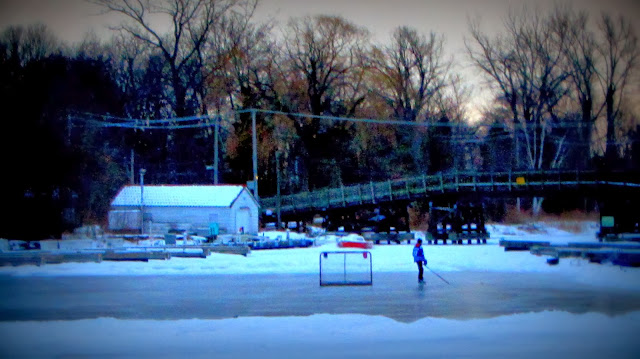 Hey, what more can I ask for eh? Canada still lives.

And we shall overcome.

Hey Simon, we lost a great man in Pete Seeger he will never be forgotten, I feel so humbly honored that he passed away on my birthday,... As for our Great Leader, elections Canada changed the boundaries in Provinces like Saskatchewan where Mulroney split all the urban vote so that rural would have the advantage. Almost 40 percent of Sask voted NDP but never received any seats He's not going to get any urban seats there, take 8 away automatically. The hillbillies will still support him regardless, they love the mini Harper, Brad Wall.

This reminds me of an interview with an Egyptian demonstrator who said Morsi wasn't really democratically elected because he got only 51% of the vote. The interviewer, presumably Canadian, asked why he didn't just wait for the next election and get rid of Morsi then. The protester replied Are you crazy?, then pointed out that giving Morsi the extra time would just allow him to manipulate the system to make it even more likely that he would be re-elected.

Harper got just under 40% of the vote.

Yes, Harper's tummy is disturbing, but careful with the fat-shaming, eh? I hate the guy, but lots of good working-class people are carrying around excess tummy weight. Just look at the additives in supermarket "food".

hi ffd...the situation in Egypt is so depressing I can barely bring myself to read about it. After all that struggle after all that hope, to find it back to where we started with another military strongman is almost more than I can bear...

hi lagatta...please, I am not trying to "fat shame" Harper or anybody else. I don't do that. I'm no saint, but trust me I'm better than that. In fact, I'm rather offended you would even suggest that. Especially since after a winter like this one I'm carrying around about an extra ten pounds. !@#!!!
I don't even think Lord Harper tummy is "disturbing." I just find the picture funny considering how the Con propaganda machine goes out of his way to portray him in the most flattering light. I guarantee you some Con is hanging upside down from his or her heels tonight...

P.S. And now I'm going to go and eat a JUMBO pizza all by myself, knowing I can work off the extra pounds on the frozen pond tomorrow. If it doesn't melt... ;)

hi 400ho...You're right about Pete Seeger who will live forever in the hearts of those who loved him. As for Saskatchewan I see the Cons have been trying to keep ridings gerrymandered in their favour, even going to the lengths of using robocalls. You'd think they'd know better eh? I have to admit that I am a bit discouraged by the situation in that province. I always used to think of it as the golden place where medicare was born, so I hate to see that there are now so many Cons, including that mini-Harper Wall. But I guess that's what can happen to people and places when they get rich, and I'm pretty sure that Saskatchewan will get back on track, as soon as we purge the Cons from power...