Elections Canada and the Revenge of Boss Harper 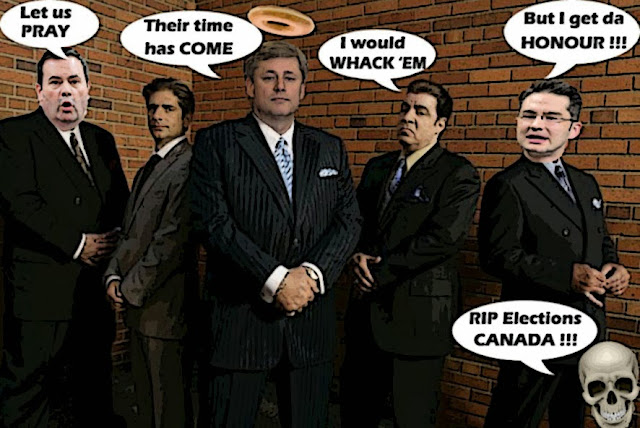 Well let's be clear, as he likes to say. Forget the smokescreen of fancy words, or the long list of minor changes, or the Orwellian name, the Fair Elections Act.

Baby Face Poilievre may have pulled the trigger.

But this was Boss Harper's revenge.

The Conservative government is overhauling the rules that govern how Canadians vote and run for office – cracking down on rogue robocalls that have embarrassed the Tories and increasing by 25 per cent the maximum allowable contributions to parties.

The government unveiled legislation that will also break up Elections Canada by stripping the agency of its role in investigating and prosecuting electoral wrongdoing. This policing function will be moved to the lower-profile office of the Director of Public Prosecutions, leaving Elections Canada with only one task: administering federal ballots.

The emasculation of the Chief Electoral Officer Marc Mayrand for daring to criticize  the Con mob's attempts to kneecap the robocall investigation. 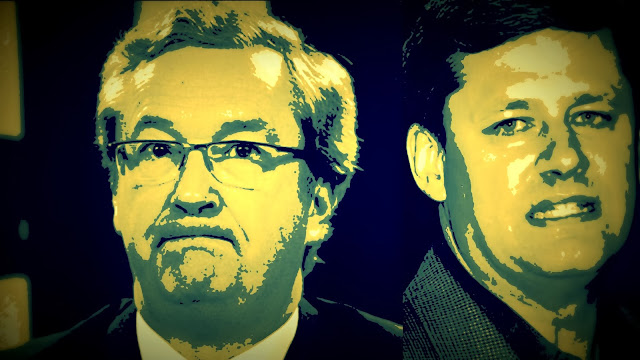 The disembowelling of Elections Canada, which did not get the powers it had requested.

A major problem with the bill is that it does little, other than stiffening some penalties and creating a call registry, to help investigate the most serious infractions of the law. Mr. Mayrand’s top request was for the elections officials to be able to compel testimony and demand to see parties’ financial records. That was ignored.

And must now warn suspects they are under investigation.

There is a special soft-touch provision for politicians: The new law requires the commissioner to inform people right away, in writing, if he starts to investigate them – unless he has reason to believe it will impede the investigation. Who else, apart from politicians, gets a statutory heads-up when an investigation into penal-law offences is started? It’s “not common,” an official admitted.

Which as you can imagine, almost ensures that there will be no further robocall charges laid before the next election.

As for preventing a similar scandal from happening again, the Con plan to create a mandatory public registry for robocall companies is also just a smokescreen.

As even Michael Sona, the only person charged in the robocall scandal points out...

So nothing has really changed, it could happen again.

And these are just weasel words.

It doesn't make it harder to break the law. It doesn't shutout big money. It allows for even more money to to be spent on elections and robocalls. It doesn't empower law enforcement.

But it does, and this is something the MSM seems to have missed, prohibit Elections Canada from putting out ads encouraging people to vote.

Because the Cons depend on voter suppression to win, that's what the robocall scandal was all about.

And it does make Stephen Harper feel really good, because it has been a blood feud for a very long time.

“The jackasses at Elections Canada are out of control.” In 2001, Stephen Harper was president of the National Citizens Coalition. That was his opening line in a fundraising letter. His loathing for the election overseers was almost pathological, recalls Gerry Nicholls, the conservative commentator who worked with Mr. Harper at the NCC. It was a “blood feud,” he says, one that appears to be “never ending.”

Which at the end of the day leaves me wondering, where is that maniac is taking us?

Is the MSM sleeping or blind?

Are we still a functioning democracy?

And of course, will it happen again?

harpie gets away with this shit because of asshats like rick salutin making excuses for the likes of him and frod and softballing hard issues into the kinds of mind pablum the oldsters can handle as in one syllable words and apologies and the need for our approbation for their heinous tactics. The m.s.m. in this country is almost as big a joke as it is in the u.s. It is already controlled by corporate money. The CBC is already dead. You can see it in the kind of "programming" changes they've already made. Now the changes in the new "law" that hit Elections Canada almost insures a larger con majority after the next election. Maybe harpie can make the koch brothers senators too. He has appointed every other fucking crook he knows.
The Canada you speak of, Simon, is in its death rattles right now. I think, like Thwap, that the time for redemption has already passed us by. We let the cons take us past the critical mass point some years ago. The cons have stacked the courts with right wing fanatics that will do their bidding so that, even if we did get off our lazy asses and mount a challenge to some of the sick shit harpie calls "laws", we would be summarily handed our asses in the courts anyway. papa bush and reagan and thatcher taught harpie a lot about how to build his "perfect government" and while he may be a psychopath, he isn't a stupid one and he was/is paying attention. Don't be too surprised if, like Gingersnap said the other day, there is no next election.
R.I.P Canada. Hello NWO and NAFTA and NAU and TPP.

Where is corporate media you ask? I'll tell ya. They're too busy hobknobbing with oil and gas companies.

Once again, 'anonymous' (if that is his real aka)_ insults anyone that fits into his category of 'oldsters' by assuming that we are all drooling idiots who will do and say anything to support the Consters..wrong and FAIL!
If asshats like him and his younger pals (and everyone knows, stats bear me out) would have gotten off their collective butts and actually voted, instead of whining, after the fact, ad nauseum, then perhaps Harpster and his merry band of thieves and crooks wouldn't be in power..it's just so much easier to blame somebody, anybody...instead of looking in the mirror.

"It's also putting a greater public emphasis on defence and arms exports with the development of a strategy "to support international sales opportunities."

The only drooling idiots I'm referring to are you and your fascist friends who elected harpie in the first place, you old fucking fuck! And I'm 63 years old and I resent mealy mouthed, weak minded old fucks like you and all of your goddammed rightwing, sniveling, groveling semi-senile pals who believe in fucking idiots like don cherry, conrad black and sun news. Try and remember that on election day and do the right thing this time grandpa! With friends like you, Canada doesn't need any enemies.

hi anon...I don't blame you for feeling that way. The situation is bleak the Cons have never been so ghastly. It is a nightmare. But I think you and my friend Thwap are underestimating the strength of this still young country, and the built up anger of so many of its citizens. It will be a hard struggle to dislodge those scumbags from power, and after that we will have to pressure a progressive government or coalition to start fighting back at the globalization conspiracy which won't be easy either. But we can't give up, our country and future generations are depending on us. And starting sometime in 2015 we can start the rebuilding process...

hi CK...it certainly seems that way, and now not just because of desire but also because of necessity. The Globe and the Star have also had layoffs, people who are desperate do desperate things, and I wouldn't be surprised if Big Oil is circling over them all like vultures. I'm afraid that after reading that Postmedia presentation I can't help feeling that the editorial integrity of their operation is fatally compromised. What we are going to have to do is support any progressive MSM outlet we cad find, and of course become more of the media ourselves...

hi warring parties...look as I said I understand how everybody is angry and the good news is your both right. Both the young and the older generation are to blame for the situation we find ourselves in. But I don't want the generations to fight themselves because we need to unite both of them to fight the Cons. And as I saw with my own eyes during the Quebec student protests, when they do unite NOBODY can stop us...

hi Hugh...yes those little rats go about on tip toes changing our country by stealth in the most ghastly manner. The last I heard they were peddling arms all over the Middle East and to some of that region's most repressive regimes. You know, the more I think about I think we're going to have to put them all in prison... ;)