Mike De Souza and the Buying of the Media 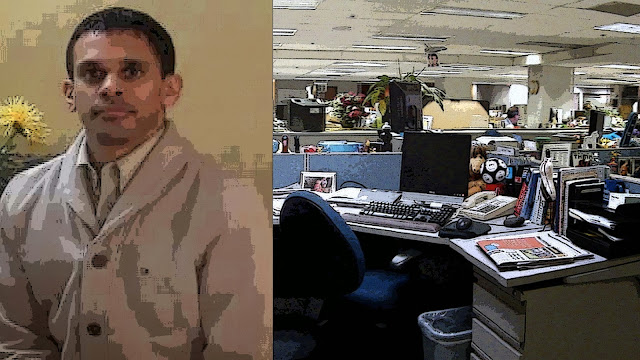 Mike de Souza is arguably the best MSM environmental reporter in Canada. A hardworking newshound who has exposed many grubby dealings between the Cons and Big Oil. And is no doubt a thorn in the sides of both of them.

Or should I say he was.

Because today along with a number of Postmedia reporters he was laid off.

Which is depressing enough, because if any country needs good environmental reporters it's Stephen Harper's sinister petrostate.

But what makes it really disturbing, is the just revealed apparently intimate relationship between Postmedia and Big Oil.

According to Postmedia's proposal, newspapers would work in partnership with CAPP to put the spotlight on Canada's oil industry. "What really drives Canada's economic engine? Energy, of course," the presentation says.

"While Albertans may be acutely aware of this fact, the rest of the country often fails to grasp the fundamental role the energy sector plays in building and sustaining economic prosperity. Postmedia and CAPP will bring energy to the forefront of our national conversation."

Because it can't help but make me wonder whether De Souza was laid off because Postmedia is desperate to save money? Or because he didn't fit into these pretty pictures? 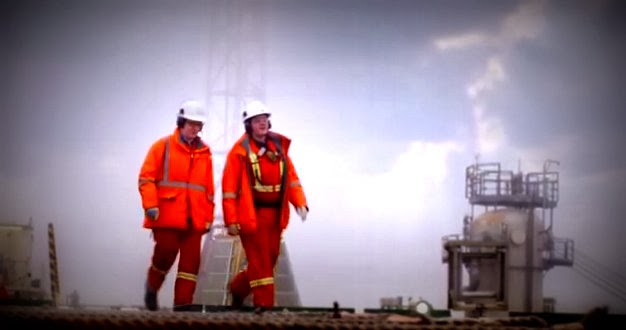 And the larger and even more troubling question is, whether at a time when so many newspapers are struggling to survive the transition to digital, they are becoming more and more vulnerable to being manipulated by big corporate interests?

Because it's not just Postmedia and Big Oil doing the tango together. The other day I went to watch a video by the Toronto Star's Rick Salutin, on the controversy over Porter Airline's plans to allow jets to land at the Island Airport.

But before I could watch it I had to watch a Porter ad plugging its proposal.

And the problem is that nobody has deeper pockets than Big Oil. You can't put on a TV set without being hit by one of their ads, which pump millions of dollars into struggling television stations all over the country.

Even as the Cons spend hundreds of millions of dollars of OUR money on similar ads, suppress reports, muzzle scientists, and burn books... 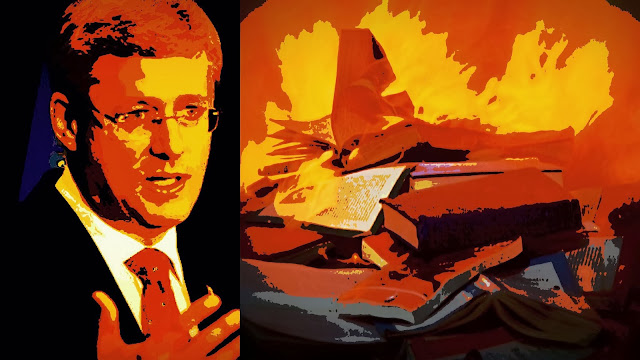 And if you think that the CBC, the public broadcaster might save us, think again.

Because thanks largely to the savage cuts the Cons have inflicted on the corporation, they're also desperate.

An internal memo to CBC employees warns of "dark clouds on the horizon" for the state broadcaster, QMI Agency has learned. CBC president and CEO Hubert Lacroix sent the ominous note last Friday.

We are working hard to confirm the bottom line," he said in the memo. "However, it's clear that tough and more fundamental decisions will have to be made to establish a longer-term, sustainable, financial model for our corporation."

So they're not likely to bite the hand that feeds them, not when the Cons have tightened their control over the corporation.

And then watch this video to remind yourself what happens to those in Harperland who dare challenge Big Oil's agenda.

And what kind of country we are becoming....

Because if you remember, that was the ad the CBC refused to run.

And then fight Stephen Harper and his Cons harder than ever.

And shout out the questions others won't or can't ask.

Before the lights go out.

And we are lost in his mad darkness... 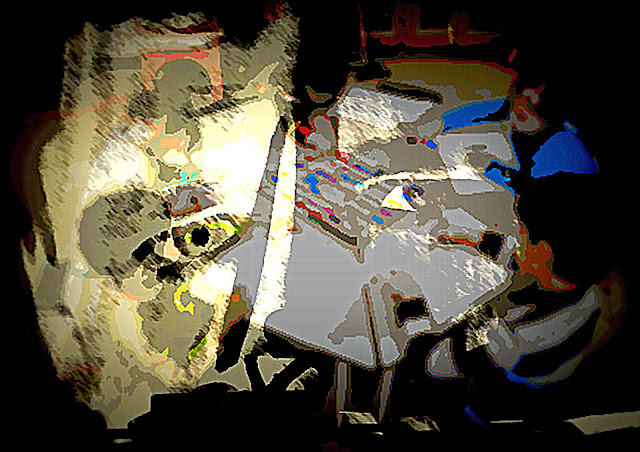 “"The memo from CBC president Hubert Lacroix, obtained by Sun News, warns of “dark clouds on the horizon” as the broadcaster faces financial problems due to low ratings — a situation made worse by the CBC's loss last year of the NHL broadcast contract to Rogers."

Give Harper one more majority term and the CBC take down will be complete.

The Preston Manning doctrine is unfolding as it should.

That doctrine mandated that the Oil Cartel in Alberta could seize the Federal government and keep Conservatives in power continuously, as has their provincial counterparts -- they had to take down the CBC to do it.

Conrad Black's control over 53% of the Canadian print media kept the Mulroney Conservatives in power for two terms, until the angry voter wiped them out in 93.

Harper needs the media to be controlled and an alliance has been put back together.

Quebecor and Power Corporation now control this alliance that includes the Canadian Press -- Mulroney is on the board at Quebecor and his law firm works for Power.

It was the Oil Cartel and their bankers in NY that steered the NHL towards Rogers.

Harper is feeding CSEC acquired intelligence through to SUN Media who is using it to strategically rip apart CBC.

Harper can now stack the CRTC panel which will bring SUN News into the mainstream.

CBC is wounded, their-out-of-date and time is short.”

hi anon...that is a bleak scenario, but they are clearly trying to seize control of the media, and the struggling media has never been so vulnerable.After re-reading Lacroix's statement I'm also concerned he will start further privatizing the network. However on the positive side it will only encourage progressives to become more of their own media, and Sun TV will NEVER be mainstream because they're too bush league...

Anon - there was plenty of gloom and doom - didn't need your comments too!! LOL. And of course today (6th) the news continued - as it has - mostly bad, now about EC and changes to the Election Act. Guess I have to say it again - Had enough yet Canada? This shit is enough to throw everyone into a deep depression!!
We need to put our heads together and rid ourselves of this prick and his nasty little thugs! If you aren't actively fighting this sham govt. - start! If you are fighting it - Good, fight harder!! We need a revolution and we cannot wait until 2015 and another fixed election! Start talking to everyone about all the crap going on with this sham govt. In my opinion, they don't really have any power - they are illegal, so why pay any attention to the crap they do. Sorry, my rant for the evening!

One more thing - tell DaSilva to take a look at the Vancouver Observer - they are doing a series on the tar sands, they may be looking for a good man!