Stephen Harper and the Con Plan to Steal the Election 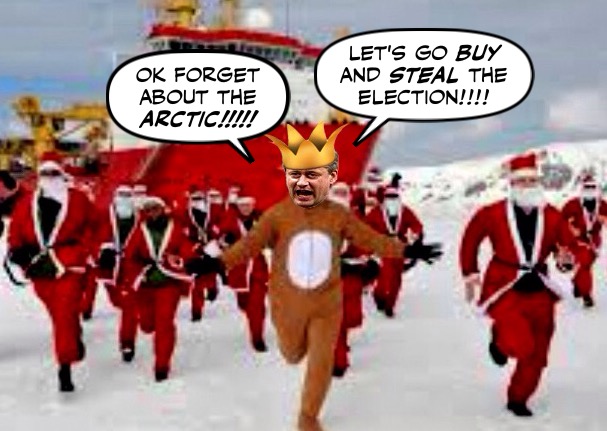 It was a day of good news and bad news on the election front yesterday.

The good news is that now that we know that Stephen Harper is cancelling his annual trip to the Arctic, we know that he is almost certainly going drop the writ much sooner than expected.

So we can be ready, and try to foil his plans to buy the election.

And the bad news? A judge has approved his devious plan to try to steal it.

A bid to stop a key provision of the Conservative government’s Fair Elections Act from being implemented in this fall’s election has been denied by the Ontario Superior Court of Justice.

Justice David Stinson ruled on Friday that a request by the Council of Canadians and the Canadian Federation of Students for an interim injunction against new rules for voter identification could not be granted.

Which could disenfranchise as many as four million voters, and make saving our Canada even harder.

But strangely enough I noticed that neither Harper nor his mini-Harper Pierre Poilievre, the one who cooked up the Unfair Elections Act, were celebrating today... 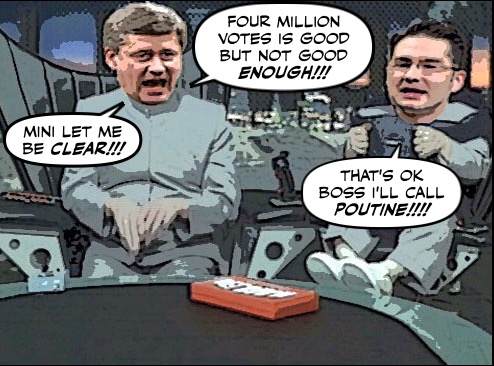 And not just because they don't want to draw attention to what they are doing, but also because the Cons are still desperate.

The economy is still sinking along with the loonie.

The scandals are still mounting.

And this must be giving them all nightmares. 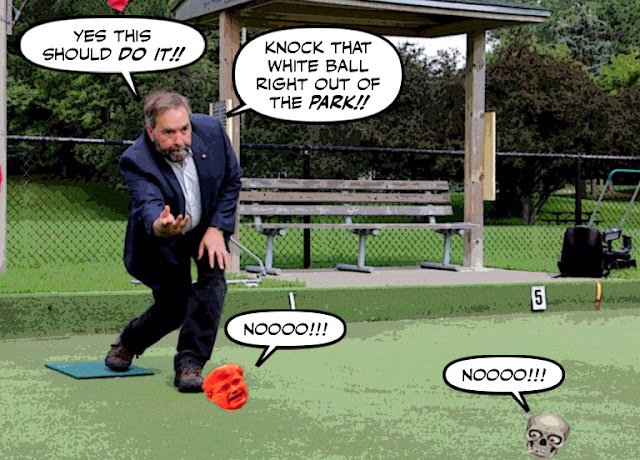 The federal NDP has now moved into sole possession of the lead in public support, according to new poll results from Forum Research. The survey, conducted Sunday and Monday, has 34 per cent of Canadian adult voters favouring the New Democrats in the federal election, which will be held Oct. 19.

Thirty-four per cent would be enough to give the NDP a minority government, the poll numbers show.

Especially since they're still spending all their time attacking Justin Trudeau.

But of course for all of us, whatever party we support, the challenge is to stop Stephen Harper from stealing the election, by suppressing the vote... 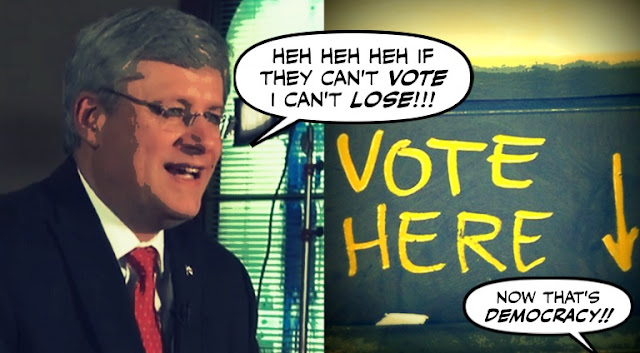 By making sure that progressives turn out to vote in record numbers.

And this is a good place to start.

Make sure that you have all the documents you need to vote. E-mail that Elections Canada guide to all the progressives you know, especially the younger ones who could be voting for the first time.

Or print up a bunch of copies and hand them out or paste them up on walls all over your neighbourhood.

And above all stay calm and focused, and never lose hope that we ARE going to defeat the Cons.

Even if you have to stick this on your fridge as I have... 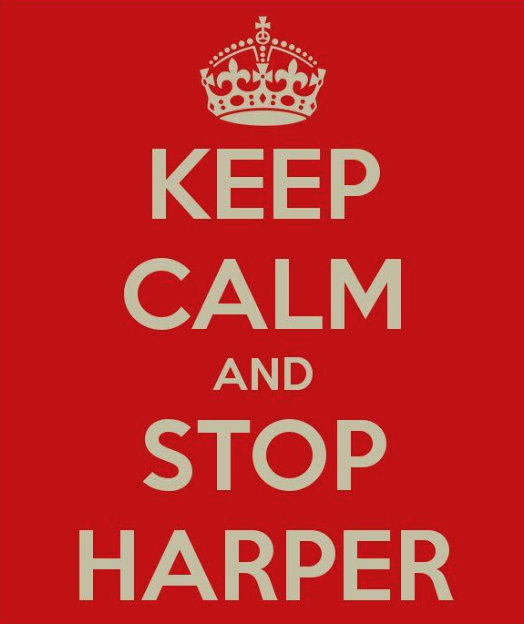 To remind me that at this time in Canadian history NOTHING is more important.

You know, the other day somebody on Twitter unearthed an old post that I had long forgotten.

Where I earnestly explained that in the rebel highlands of Scotland where I frolicked as a boy, it's so much simpler than it is here to get things going.

As soon as we hear the sounds of the pipes and the drums we all run down into the valley or the glen, and prepare to do battle.

And since that post contained a video that I had also long forgotten. And it does have pipes and drums, and it's a cover of the song "Don't Stop Believing."

I thought I'd play it again...

Yup. Whenever the time comes we will be ready. Never stop believing.

The Cons are scummy liars and thieves, their leader is a politically depraved monster, and they are trying to buy and steal an election.

But we are more, we are better, we are stronger than them. We are fighting for the survival of our country.

And we ARE going to defeat them.

Was that judge a harper appointee?

Let me be clear:

The ONLY thing that will prevent this guy from winning again is strategic voting.

If the Left blow their votes with petty infighting again, we get another Harper majority.

Please, Simon, help get the word out.

hi anon...I tried to look that up. but couldn't find any information. And to be fair I don't blame the judge. He was left in an impossible situation with an election almost upon us. The blame goes to Poilievre and his master Harper, who rigged the Elections Act, and made it even easier to steal an election. Hopefully one day they will have to answer for their actions...

hi anon...although there are risks associated with strategic voting I tend to agree with you. At the very least we should vote intelligently and not throw our votes away by voting for someone who has no chance of winning. If only for once in our lives now is the time to put our country before our favourite parties. I was stunned yesterday when a Liberal supporter on my twitter feed came flying at me for that playful photo shop of Mulcair bowling. Claiming that she would rather vote for Harper than vote for the NDP. That kind of blind partisanship can only lead us to disaster. And thank you, I'm glad you like my little blog. It loves you back... ;)

I'm going to see if I can get a reduced price if I order 50 mugs with:

Kristen t • 2 days ago
The "Fair Elections Act" was never about ensuring fair elections. The unilateral changes to election law contain measures that have absolutely nothing to do with enhancing the integrity of our elections.

If fair elections were the goal the Harper Government would have given Elections Canada the additional powers they requested, restored the budget cuts and increased their budget.

The CPC under Stephen Harper's leadership has had issues in every election since 2006. The changes to election law were devised well in advance of the 2015 election in order to further erode the democratic process and tilt the balance in favour of the CPC.

Canadian democracy is not well served by a PM who abuses his office to enact legislation that for all intents and purposes entrenches the ability to contravene election rules into law.

well perhaps the act will be challenged after the election. now that could be fun. people denied the right to vote, sue, get through the courts and win. I do believe deceiving steven will try to 'steal' then this up coming election. It isn't as if they haven't cheated before. that little meeting with Scott Walker must have been an interesting little gathering. Seems stevie likes those meetings, first with bennie, now with scottie.

hi David....I might try to make myself a t-shirt, although while I like the STOP Harper part, I don't know it would be honest to ask others to stay calm, when the Con regime enrages me almost every day of the year... ;)

hi David...the fact is the Cons have done every they can to rig the election process, and goodness knows what they might be planning in October. I consider them a rogue regime, with no discernible moral compass, so they are capable of anything...

hi e.a.f...yes hopefully the Elections Act will be changed, to make it easier to vote rather than more difficult. And of course if the progressive parties combine to scrap our first past the post voting system it would change everything....

I'm not surprised harper cancelled his Arctic photo op....because in the end, that's all it ever was. He knows he's in HUGE trouble in that riding (or at least he should know).....and now his true colours emerge. People there are frustrated over food prices which this government has done NOTHING about as well as the whole arctic drilling issue. I do find it interesting that he won't return to Nanisivk given that the accomodation he stayed at in nearby Arctic Bay has gone out of business....I used to live just down the road from this place and actually knew the owner. But anyhow, I'm hoping the polls as they are stand up. While I have ideological issues with both the NDP and the Liberals, I will categorically state that there is no way in hell I will vote for or support the Cons....ever.