Stephen Harper and the Issue that Will Destroy Him 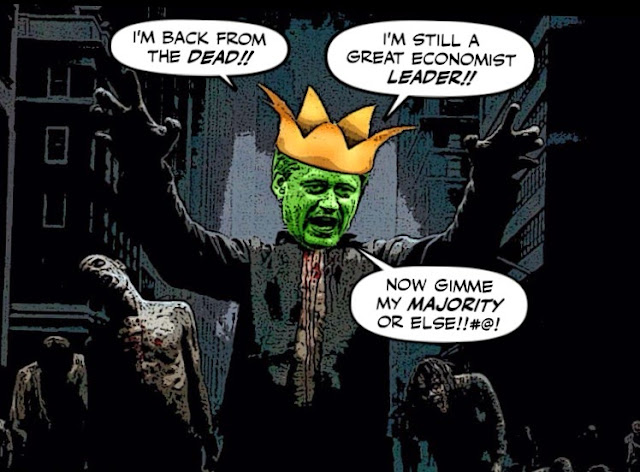 Gosh. What a difference a day makes. Yesterday I wrote about that nightmarish Ipsos Reid poll that suggested that Stephen Harper had risen from his political grave, and was heading for another majority.

And I said that I couldn't wait for another poll, to see if the numbers were more encouraging.

And whether the sagging economy might take him down with it.

And in that regard the news couldn't be better.

The Liberals have a small but significant lead, and they have led in every poll we have conducted for well over a year. They have a very important lead in the critical Ontario market and they have strength throughout the country, and with some key voting groups like those more educated and the huge boomer cohort.

Justin Trudeau's Liberals are back in the lead. And although the Cons are still a deadly threat. 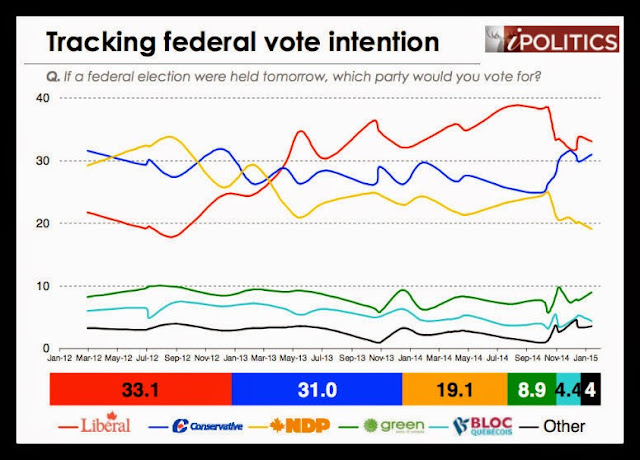 The extremely unpopular Stephen Harper is only mildly so now and the base that provided a majority in 2011 is returning to the fold. Strikingly, the critical senior vote has shown a net 20 point turnaround and is now squarely in the Conservative camp.

Throw in the advantage of a well-resourced and practiced political machine and those 31 points — the Conservatives’ highest polling in two years — seem to point to a fourth victory for Prime Minister Harper.

The terrorist scare that he helped fuel from the safety of his cowardly closet is fading... 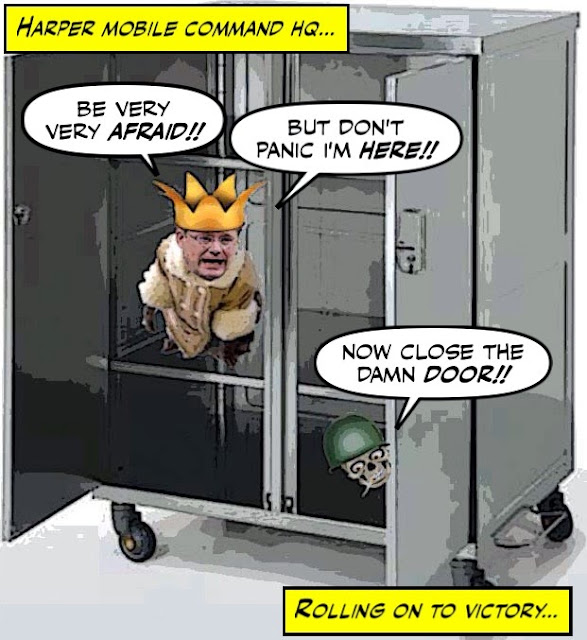 And the economy is now the biggest threat to his future.

What is mildly surprising and quite important to note is that the very real security bounce that put the Conservatives in a virtual tie with the Liberals in late November seems to be weakening — not strengthening.

In fact, the more we look at the numbers, the more convinced we become that this election will be about the economy and the government’s role in managing it — not security.

Which explains why the Cons are panicking, and why Oily Joe Oliver prorogued the budget... 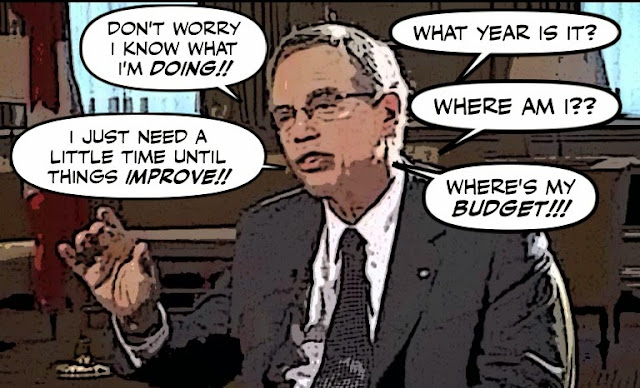 Desperately hoping for an economic recovery that may not arrive in time.

Private-sector economists who will supply key forecasts for Finance Minister Joe Oliver’s upcoming budget say a delayed delivery makes sense, but there are few signs the economic picture will be much better three months from now.

“They’re looking to see if stability emerges – or some type of stability,” said Mary Webb, Scotiabank’s director of economic and fiscal policy. “It may not emerge. And I believe we’re all worried about that outcome.”

And if the economy doesn't miraculously recover, Stephen Harper will come under increasing pressure to explain why he blew the surplus before he had one.

The changing landscape is leading some to second-guess Prime Minister Stephen Harper’s decision to announce major retroactive tax cuts for families in October – outside of the budget process – that will reduce federal revenue by $27-billion over six years.

And why after spending all those billions to try to buy the votes of some Canadians, he still has the nerve to call to call himself a Great Economist Leader?

Instead of Great Buffoon Leader.

Even as this other buffoon threatens to flatten him... 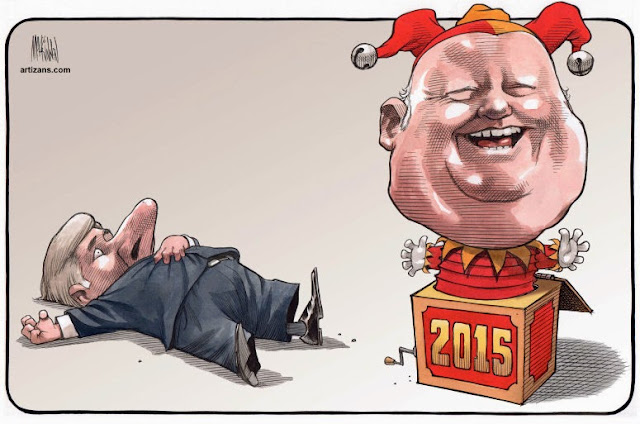 Which all things considered, is just about as good as it could be right now.

For time is still his enemy, and if the scandals don't condemn him, his lousy economic record will.

He didn't know what he was doing.

He is the most corrupt, incompetent, and morally depraved leader this country has ever known. 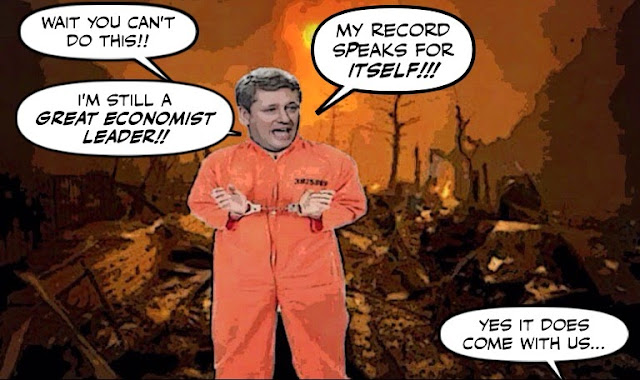 Now isn't THAT a great way to end this scary week?

I got a phone call at 9:15 last night that may be the prelude to a robo call to dissuade me from voting whenever Harper comes out of the nice safe warm closet to drop the writ.

I live in Nova Scotia and am ashamed to have slimy scotty arsestrong as the cons dissembler. The call was from a Charlettown PEI number, 902-620-0798 identified , quickly and somewhat unclearly, as from the boiler outreach centre for Stephen Harper. The question was " do you intend to vote for Stephen Harper, Scott Armstrong and the concervative party. During the last election similar calls were used to identify targets for calls lying about changed polling stations . It looks like the setup for the full poutine is in place.

I don't know how they got my unpublished phone number, but they asked for me by name. I hung up without answering - without a recording , even with one, Elections Canada is useless.

Found it ! Thanks Google and Wikipeadea. Its " Voter Outreach Centre " which is exactly the language used by the con voter suppression committee in the last election. They used the Responsive Marketing Group for some of the robo call work . Coincidentally, Responsive Marketing Group has a Charlotown office at 1235 Bay St, 902-892-5109. Not even bothering to change any of the language speaks to the frighteners they have put on Election Canada

Will we see Michael Sona in the Senate ?

rum that is outrageous. I have been called before too and asked if I was going to vote conservative I hung up.

We know they are already seeing if disgraced former B.C. premier, el gordo, Campbell is "trustworthy". Perhaps he and Sona can both be anointed to the Senate.

it was nice to see "hide in the closet harpers' former buddy is being brought back to Canada to stand trial for fraud. Just another nice case to use along with Duffy's trial.

When "the great economists" is "giving" $27 Billion to the "entitled" in the way of income splitting you can rest assured he will be hacking up our national health care plan. Now if the other 3 parties might want to start the discussion on that little point, they may win the next election. There are 2 things Canadians care about; its polar bears and their health care system. In declining economic times that health care system will be critical to many. They won't be able to pay for private health care and they know it.

It is of no surprise to us? It is not beneath Harper's dignity to cheat to win and most of us expect him to cheat. It wouldn't be Harper if he didn't cheat.

Harper is so revolting and repulsive, anyone supporting him have no self respect nor honor.

I've made a recipe that Harper will find perfect for when he "cooks the books" this spring:

Throw all ingredients into a toilet shaped pot greased with 10w30 and stir heartily for 10 minutes(clothes hangers will work).
Shape the results into a bloated omnibus budget, place in oven at 400F and cook for 20 minutes.
Now foist it upon Canadians with your dead-eyed grin and a sprinkle of contemptuous lies.

I think I'll eat before he serves this up.

The same number came up on my caller ID, but I did not answer because I didn't recognize the number.......this was on Thursday, Jan.15th at 8:18 PM. I also live in NS.

call the police, call the UN do not let this sit

Anonymous 4:41 PM you have me Rolling On The Floor Laughing [ROFL] brilliant my man brilliant. I have a recipe for Harper too are you ready?

Seven pounds of paper bullshit about the "economist" PM.
Throw in the boys in short pants in the PMO.
Topped by all the trained seal cons.
Throw into a giant blender.
Add bitumen.
BC lie-beral leader Christy Clark.
Next Jim Prentice and Alison Redford.
Blend well then throw Harper in for good measure and blend more.
What did I forget oh Harper's Red Chinese friends.

I'll throw the cocktail ingredients into the giant blender and I'll invite Vladimir Putin to push the button...

hi rumleyfips...that is indeed interesting. For it not only shows that they may be setting things up for another robocall run. But it also may show that we are closer to an election than most people imagine. For why would they be calling now for an election in October? And yes, good question. How did they get your unlisted phone number and your name? And are they trying to intimidate you? It's horrible that one should have to ask such questions. But it is yet another reason why we simply must get rid of them...

hi Kathleen...if they phone again, I would ask them as many questions as you can, and if you can try to record the conversation. It could come in useful later...

hi rumleyfips...I don't think we'll see Sona in the Senate, but we need to keep on top of those Cons so we can prevent them from stealing another election, and send them to the place they deserve...

hi e.a.f...the Cons are trying to cover up the scandal of their income-splitting plan for rich people, by focusing all their propaganda on their childcare payments. But the opposition should expose that sham, because it has the potential to do the Cons a lot of damage. And yes, the future of medicare is another issue that can also hurt them big time, so it should be front and centre in the next election campaign...

hi anon...no it is no surprise, but all the more reason for us to get organized, and make sure we defeat them...

hi anon...hmmm...tasty. But are you added enough baloney? May I suggest you double that and the steaming bullshit...;)

hi mogs....hmmm...that too looks tasty. But you may have to use a giant cement mixer instead of a blender, to fit them all in... ;)

That would work Simon but I was trying to avoid any leftovers :)

Hey Mogs, better get Vlad to bring a few gallons of vodka to wash that mess down or it'll be "toughski shitski".

Simon ya cement mixer and anon 12:49 maybe a barrel of the finest Russian vodka? Then we can drown the rats before we start the cement mixer truck. The problem is though where to dump the load?