Dean Del Mastro and the Barbarity of the Cons 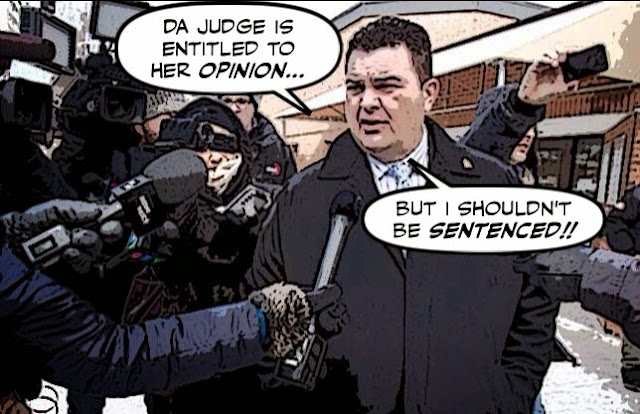 Well I'm sure it's just a coincidence that on the day Dean Del Mastro appeared in court for his sentencing hearing.

And demanded a mistrial.

Former MP Dean Del Mastro is asking the Ontario Court of Justice to dismiss his Oct. 31 guilty verdicts related to overspending in the 2008 federal election campaign and declare a mistrial.

After having told the judge that her guilty verdict was just a matter of opinion:

The Cons would choose this day to let it be known that they're all for harsh sentences.

The Conservative government is developing legislation that would mean some murderers will have no hope of release from prison.

The new penalty would apply to several categories of those convicted of first-degree murder: killers of police and jail guards, anyone who kills during a sexual assault, kidnapping or act of terrorism and for especially brutal murders.

Even though that makes absolutely no sense. Dangerous criminals can already be kept in jail for life under our existing sentencing laws.

Even though it would eliminate yet another thing that makes us different from the Americans.

And even though it has been called "the other death penalty" or "death by incarceration" and is yet another assault on our Canadian values. 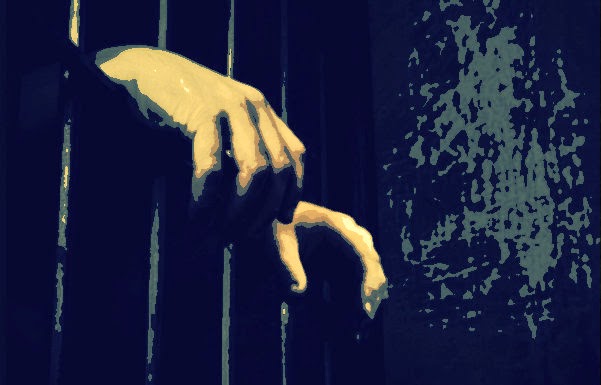 Canada does not need automatic life without parole. It is a cruel punishment that risks failing the constitutional test of being proportionate to both the crime and the criminal. It is also self-defeating, in that a person who murders one police officer or one kidnap victim would get the exact same sentence as the person who murders five, or 10, or 20.

Worst of all, it undoes the progress Canada made when it abolished the death penalty in 1976. Canadians have struggled with the fact that the alternative to the finality of capital punishment is the perpetual obligation created by rehabilitation and parole. But that was our choice, and it was a good one. Since the end of the death penalty, the murder rate in Canada has been cut in half.

But then it does explain what Stephen Harper was really doing at that Mountie' s funeral on Monday... 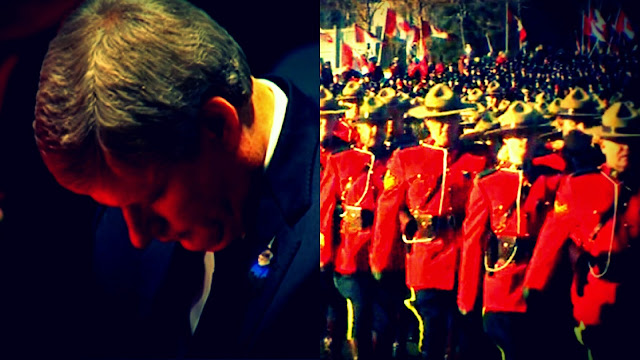 The departments of Public Safety and Justice, which are working together on the new bill, were told to speed up their work after a man shot two Mounties in St. Albert, Alta., on Jan. 17, killing one. The bill is expected to be introduced within a couple of weeks of a new terrorism bill coming on Friday, the source said.

And it does make it clear that he will do ANYTHING  to win another bloody majority.

Even if that means appealing to the mob, and the lowest and most bestial instincts of humanity... Take us back to the barbarity of the Middle Ages, or the Old Testament. And make us less Canadian.

And yes, Ralph Surette is right. The Cons are out of control.

What's going on under the radar -- where it's kept thanks to the Harper government's expertise in propaganda and manipulation -- is the rodent-like gnawing at democratic process and the country's fundamental legal structure.

Here's merely the latest example. The government has been firing researchers in the Justice Department because the facts they were coming up with didn't square with the party line, especially on their regressive prisons policy.

And we can't get rid of them and their depraved leader soon enough.

The "agenda" is to yoke every important national function -- the law, the courts, the tax system, the civil service, important offices like the Chief Electoral Officer, and every aspect of government policy, notably science -- to make them serve the function of keeping the Conservative party in power. These are the natural instincts of dictators.

But may I suggest that the new progressive government keep the life without parole law on the books for at least a year after the Cons are defeated.

So that we can charge them with crimes against Canada.

And give them the sentences they deserve... On the Jan. 27 edition of REVUE POLITIQUE (not webbed yet)

one guest said that if you passed a bill stating that if took away a prisoner's right to at least have a parole hearing in the future, he may say to himself "I've got nothing left to lose" and try to attack and kill a guard or fellow prisoner.

Typical con clown bullshit at the still point of destruction....

Read in the Ipolitics morning brief some wonderful news:

Two of my favourite books are being "launched" TODAY at the Pearson Centre in Ottawa............namely

I'm surprised he hasn't legislated the "Get out of jail free card" for his convicted MP's and buddies yet. It would help unclog the court system.

There are currently enough laws on the books which prevent very dangerous criminals from ever being released. what this new law will do is bring Canada into line with americans. Why would con harper do that? If you have a look at the American prison system you will note it is mostly a private corporate run system which is listed on the New York stock exchange and makes a great deal of money. Some of these corporations, in their contracts with various states will demand the prisons be kept "full". they want a min. of prisoners in their prisons. Its not about law and order, its about profit.

Do not be surprised if the cons will shortly be announcing new prisons and they will be run by "private corporations". B.C. already is building new prisons and they are Private/Public partnerships. the Americans currently have over 2 million people in jail. they highest in the world, 600 thousand more than China. HEALTH care in American prisons is almost non existent, food is terrible, prisoners go into jail and come out in debt--they get charged for all sorts of stuff. While in jail prisons are required to work at jobs which make money for the corporations, so it is simply a new form of slavery. so welcome to harper and his cons new "dream", slavery and profits. The problem is harper's cons maybe the new guest of the queen at .... oh, right, they will be guests of corporate entities from America.

Criminologist Jean-Claude Bernheim: "An inmate who has no hope of getting out, he has nothing to lose, and if he was convicted of murder, there's nothing to stop him from committing another murder because he's got his sentence..."

Criminologist Jean-Claude Bernheim criticizes the government’s intention to consider eliminating the possibility of parole for some murderers even after they have served 25 years.

Even some of Harper's fellow Christians have had enough with his "tough on crime" agenda:

Check out this article, "Tough on crime is tough on people". Click forward to pages 42-47:

hi David...yes that is another reason why the life without parole idea is crazy. It will make life more dangerous for other prisoners and guards. Our prison system works on a reward punishment system, and if you take away hope there is no incentive to change your behaviour. It is just an appeal to the mob, and unfortunately there are many Canadians that are susceptible to that call of the jungle....

hi mogs...yes that is the consolation. They are hauling the most abominable things out of Harper's closet of horrors, so they must be desperate....

hi Omar...thanks for the link. I'm glad to see that more books are being written about the depravities of the Harper regime. The more the better...

hi anon...he doesn't have to, because even the convicted are being stroked rather than punished. Take Michael Sona for example. He's appealing his NINE month sentence for trying to steal an election. While his co-conspirators aren't even being investigated. It's a total farce, and yet another sign that something is terribly wrong in this country....

hi e.a.f...yes, one of the things that distresses me the most about the Harper regime is that they are constantly working to erode the differences between Canada and the U.S. Differences that are essential if we are to survive as a truly independent country. But the Harper hates this country with a passion, and his Cons are just our Republicans...

hi David...thanks for those links.It's good to see that even some Cons are offended by Harper's machinations. And I noticed that Jason Kenney has been speaking up about the new anti-terrorist legislation, and warning that it must be delicately balanced. And I'm sure that the libertarian wing must also be troubled. In Harper's desperate attempt to shore up his rabid base, he may end up hurting himself...