Stephen Harper: The Not So Great Economist Leader 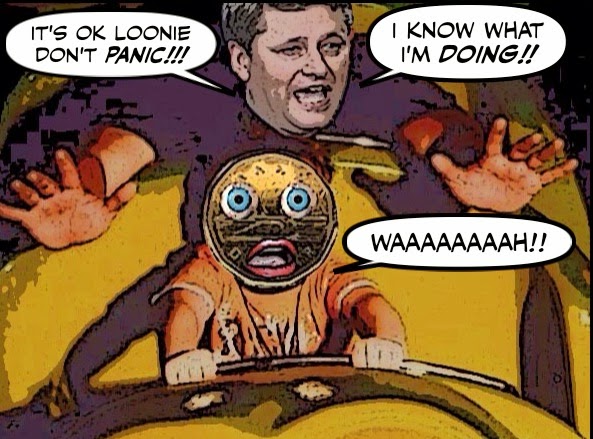 Well as you know, Stephen Harper is desperately trying to convince us, and our falling loonie, that everything is under control.

And that he is STILL a Great Economist Leader.

The Canadian dollar is sinking ever deeper, hitting its lowest in almost six years, amid the ongoing rout in the oil market and increasingly “dovish” central banks.

Because now the poor loonie is the Harper Peso. And we're all a little poorer.

But then why should we be surprised eh?

When all his claims that he knows what he's doing, are turning out to be FRAUDULENT.

He is after all no Great Tax Buster.

Or no Great Tax Biter. 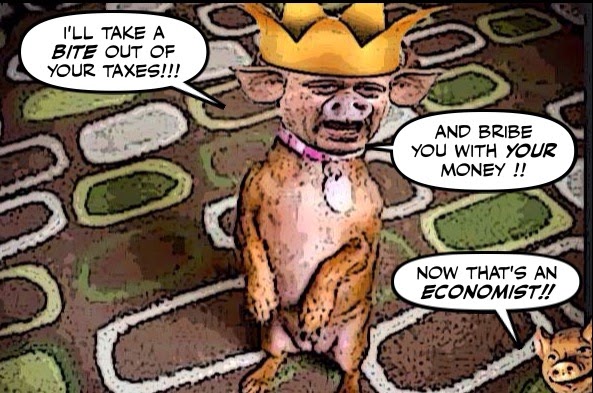 Data tabled in the House of Commons this week shows a variety of tax changes and the elimination of old tax credits will rake in $3.4 billion more for the federal government in 2015-2016.

Just a dogged doggy hypocrite, who would put his paws in our pockets without us even knowing, and steal our money while claiming he's making us richer.

He is also no Great Money Manager

The Harper government spent more than $180,000 last year to run the office of a corporate social responsibility counsellor for the Canadian mining industry — even though there was no counsellor.

Just a shabby Con artist, and a shameless whore for Big Business.

And his extravagant claims that he is creating gazillions of good jobs, are turning out to be somewhat less than truthful.

New Statistics Canada data shows that the quality of Canadian jobs has declined since 2006 -- the year the Conservatives took office -- with low-paying jobs seeing growth and high-paying jobs suffering a decline.

The long-term job data doesn't help the Conservatives either. It shows that the quality of Canadian jobs has declined since they were elected in 2006 -- with employment trends for low-end and high-end jobs going in opposite directions. That seems to contrast with the "overwhelmingly full-time, high-paying, private-sector jobs" Prime Minister Harper trumpeted creating on Sunday.

And as I pointed out the other day, his attempt to reinvent himself, or mutate from Mr Oil to Mr Manufacturing, was never going to be easy... 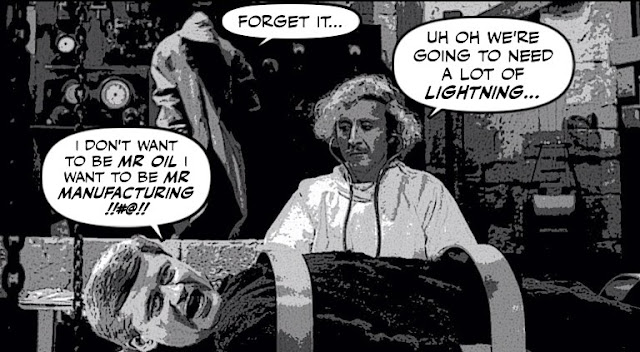 And is in fact, as Rick Mercer points out, an absolute farce...

But let's give credit where it's due.

Harper is the guy who spend the surplus before he had one. The one who put all our eggs in one oily basket, with disastrous results... 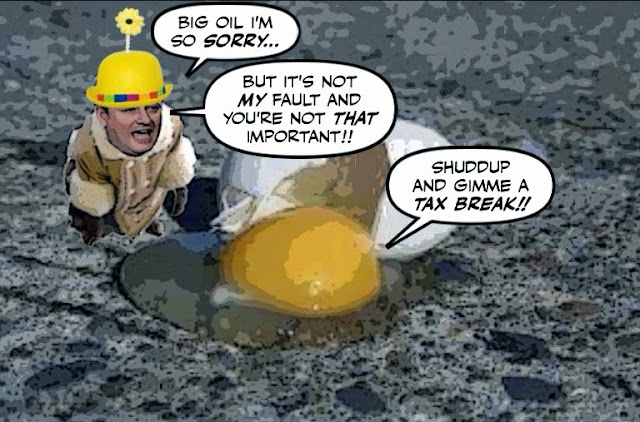 The one who's now trying to pretend he had nothing to do with that eggy mess.

And the one who gutted the census so now, like him, we're ALL stumbling around in the dark.

The cancellation of the mandatory long-form census has damaged research in key areas, from how immigrants are doing in the labour market to how the middle class is faring, while making it more difficult for cities to ensure taxpayer dollars are being spent wisely, planners and researchers say.

The bumbling fool who didn't see it coming, doesn't know what he's doing, and is making it up as he goes along.

And we will use all of that against him in the next election campaign.

In fact, I can hear it now eh?

And no Great Economist Leader... 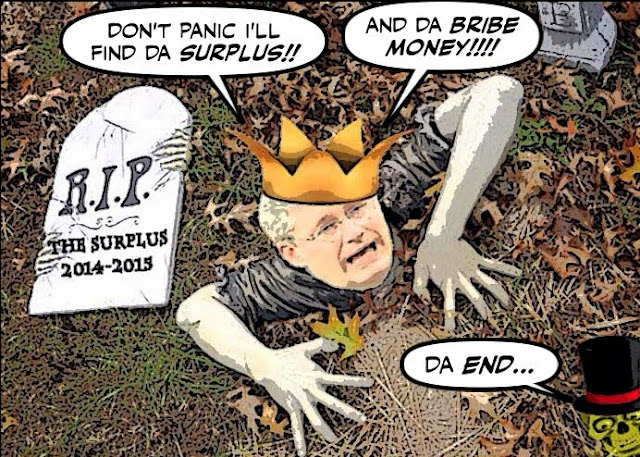 Going to be another interesting day on the Hill !

The complete ignorance to manufacturing that harper and his incompetent snake oil salesman have displayed these last few years is astonishing to say the least. Hundreds upon thousands of good paying jobs down the toilet and not a peep out of these people to find out why. Some really obvious questions need to come harper's way to find out why a government would put all their eggs in one basket and leave the country so vulnerable. Rick Mercer says it best, with the exception of Ottawa, Ontario Schmario until last October. The ridiculous praise on Oliver's decision to delay the budget is something we should be paying attention to because it has zero to do with good fiscal management, as Rick says so bluntly, it's all panic and complete lack of vision thats brought us to this point. The emperor indeed is stark naked.

He printed his own press pass in NewFound Land and would interview Federal politicians when they came to St. Johns with the most hilarious quires you could think of and they took him seriously for a while and gave back some very telling answers. Rick is gay as well he is a very intelligent and humorous individual I appreciate him and I love his rants they are most brilliant.

He skewers politicians better than any I love the man.

Well it's his aim in the first place isn't it? To turn us into a low wage economy. I have a young friend in Mexico who tells me there are lots of jobs. But the pay and hours are so poor he can't save enough in the summer to afford to go to school. Sound familiar?

Classic Rick " ...commercials on TV telling us paid by us that our economy is the envy of the world." Yo Rick yo bro. And what Harper-cons refuse to advertise is they alone made us enemies of middle eastern states who in response to the Harper-cons bombing campaign in countries we had no quarrel with dumped a shit-load of oil on the market to tank Canada's economy. Oh and Harper meanwhile claims to be a brilliant economist and strategist? He's a donkey's ass...

The problem with globalization is that most stuff we purchase is made somewhere else.
So with a low dollar, everything is more expensive.
We should be making more of the junk we buy!
It would mean more manufacturing jobs for one thing.
I have two excellent guitars made in Quebec for example.
That's my rant. Cheers.

the loonie has fallen and many blame the decline on oil prices. However, the oil/gas industry is just a small part of the Canadian economy, less than 5 or 10%. Perhaps the real reason the loonie is falling so fast and so low is the international community sees what many of us see, a P.M. who is not an economist, a P.M. who can't even keep the country "afloat" and has recklessly spent money on things which were not necessary for the good of the country, i.e. income splitting.

having one of the lowest corporate tax rates in Canada means the government is being defunded. That isn't what smart business people do.

P.M. Harper is spending a lot of Canadian $s in the middle east, at $90K per bomb. In tough economic times smart people don't do that.

So perhaps the real reason the Canadian $ is dropping so fast is the international community no longer has faith in Canada as an economically stable country. Sort of more like "putin", Harper, "putin' the country through unnecessary economic stress.

the lack of clean water in many areas in this country is not what you see in first rate countries, and we have a lot of dirty water in this country and a lot of communities which don't have running water at all. Sort of like putin Russia.

When you compare Canada to Russia or Putin to Harper perhaps we can see why the international community no longer has faith in Canada/P.M. harper. It has little to do with oil/gas declining. it has more to do with the leaders running the country as their person fiefdoms.

Harper is going to use the $3 billion from the contingency fund and possibly more cuts to the provinces to "balance the budget". But of course, as Mulcair pointed out, there is no way to actually PROVE Harper will balance the budget until 2016. It's such a sham anyway. It's misdirection--"Oh look at our balanced budget!" (and don't look at the BILLIONS we've added to the federal debt since 2006)

Simon - what are your thoughts on Paul Hillyer's economic theories?

The Law Suit against The Bank of Canada is proceeding. COMER acronym for Committee On Monetary And Economic Reform that Paul helped found hired a powerful Toronto Lawyer who is not to be fooled with. Among his many other accomplishments he forced the Supreme Court of Canada to slap down Stephen Joesph Harper's appointment of Marc Nadon to The Supreme Court of Canada. He is Rocco Galati Nadon was not qualified according to Constitutional law Steve was breaking the law of the land again that he does as often as he takes a piss. Hillyer was a defense minister for the Canadian government long before it became "the Harper government' I believe Paul Hillyer.

I can't speak for Simon though...

hi Kathleen...the CBC pays his salary. And they can't give him a raise because the Cons have cut its budget, and they still have to pay Rex Murphy for stinking out the airwaves. But yes Rick does a great job of socking it to the Cons....

hi bcwaterboy...I completely agree with you, the Con handling of the economy has been appalling. For not only did they decimate or manufacturing sector, in all the years they have been in power they have failed to come up with an industrial strategy to take us into the heart of the 21st Century. It's criminal negligence, and the only good news is that we will make them pay for it...

hi mogs...thanks for the link to the video. And I agree with him, it's good to be polite Canadians, as long as we are not passive. And along with Michael Harris, I'll second him for the Progressive Order of Canada....

hi anon...it sounds very familiar. It seems hard to believe, but Harper would turn us into a low wage economy, and then claim he's a great economist. Th situation is desperate and he's deluded...

hi Hugh...yes globalization has been an absolute disaster for working people, shipping their jobs to the lowest wage countries, making the rich richer, and leading the rest of us on a mad race to the bottom. The Americans have had some success recently in getting companies to return to the U.S. But in this country the Cons apart from their auto bailout, have done nothing to keep good jobs here. And thank you for buying three guitars in Quebec, my people are grateful... ;)

hi e.a.f...one of the main reasons the loonies is falling so fast is indeed that the Cons made it sound like the oil sector is us. So when it goes down the world assumes that our whole economy is tanking. And don't forget that the TSX is heavily weighted in favour of energy stocks, so that doesn't help either. If the Cons had really done a good job with the economy I wouldn't hesitate to give them credit. But they haven't, they have no vision, no strategy, and they are leading us to disaster...

hi David...yes it is a sham, and to make it even worse I read somewhere that they are planning to release their budget just before the Easter break so there will be no chance to debate it in Parliament,. It is really scandalous and they really should be arrested...

hi Liberta...to be honest I don't know enough about him or his theories to offer an opinion. And although I am convinced I must have come from another planet, I find his UFO musings a little disconcerting... ;)