Stephen Harper and the Whispering Way to War Golly. What a difference a day makes. On Wednesday Stephen Harper was loudly taunting the opposition.

And all but inviting the terrorists to attack us.

But yesterday he was suddenly more subdued, as if realizing what might happen if they did attack us. And Canadians blamed him.

So he was barely whispering as he met with security officials, and prepared to turn Canada into a police state. 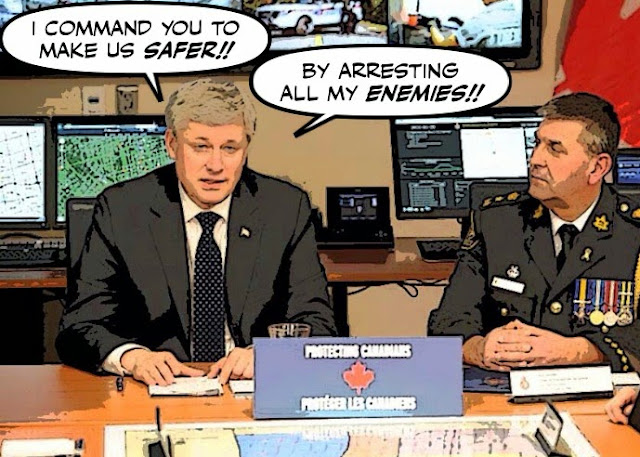 Canada’s spy agency will be granted the authority to intervene and disrupt threats to national security in a massive expansion of its powers as the federal government tries to make it easier to thwart terror plots at home and abroad, sources say.

The new power would lift a fundamental restriction on CSIS’s activities and gives the agency a measure of authority that’s currently reserved for police forces.

So now if you oppose his sinister agenda, you too can be a terrorist.

The legislation is also expected to: criminalize the advocacy or promotion of terrorism; lower the threshold for preventative arrest or detention of suspected extremists; relax the requirements necessary to prevent suspected jihadis from boarding a plane; grant government departments explicit authority to share private information, including passport applications, or confidential commercial data, with law enforcement agencies; make it easier for authorities to track and monitor suspects.

While making sure he won't be in Parliament to answer any questions.

The legislation is expected to be tabled around midday Friday, and Prime Minister Stephen Harper will address it from a community centre in Richmond Hill, Ont.

And trying to make sure that neither will the opposition. 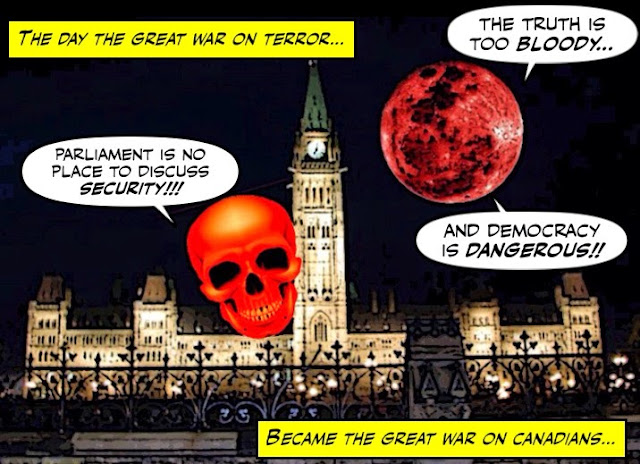 A briefing tomorrow for MPs regarding the government's proposed anti-terror legislation is set for a rather inconvenient time: the middle of question period.

Public Safety Minister Steven Blaney's office sent an invitation to MPs on Wednesday to tell them the briefing on the latest anti-terrorism measures will be held at 11:30 a.m. Friday, just down the hall from the House of Commons.

Because he'd rather nobody asked too many questions about that badly flawed bill.

Prime Minister Stephen Harper said last weekend that new anti-terror legislation to be introduced on Friday will, among other things, “criminalize the promotion of terrorism.” Such a move, however, could have a chilling effect on freedom of expression in Canada and would not necessarily contribute to effectively fighting domestic extremism, according to legal experts.

Which isn't really needed, and could actually end up helping rather than hurting the terrorists.

"Sometimes these things can become wins for extremists and terrorists," says Scott Stewart, vice-president of tactical analysis at Stratfor, a U.S.-based private intelligence and consulting firm.They are trying to provoke further attacks and if the response reinforces their perspective on the state of the world, then it ends up helping their cause."

And because as Michael Harris points out, he'd rather whisper his way to war. 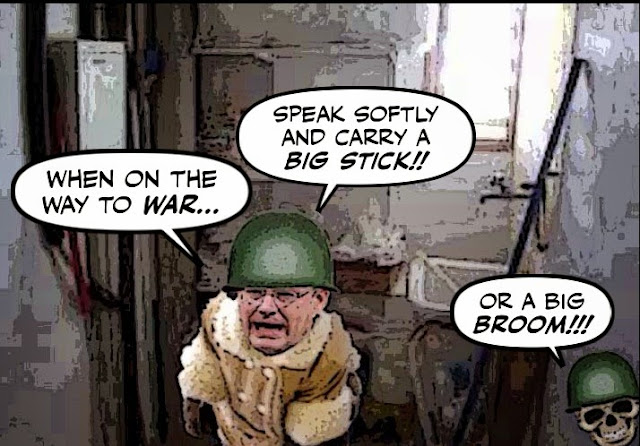 True to form, Stephen Harper has not declared himself in an open way on Canada’s disputed military mission in Iraq. He has slipped a blindfold over the eyes of Canadians and hoodwinked Parliament — going to war on a lie. And now that he has been outed, he is trying to cover himself with the last refuge of scoundrels: jingoistic patriotism. He is turning Canadian politics into a bad Kipling poem.

Mr. Harper politicizes everything he touches. Now he is playing politics with war. Playing off the Charlie Hebdo atrocity, he will stir the pot, fear-monger and falsify to leave the impression that war is inevitable — that only he knows how to practise “hard power,” to save Canadians from jihadists bent on decapitation.

So he can turn the country into a police state, turn himself into George Bush.

While the PM morphs into George W. Bush on his publicly subsidized weekly political infomercial, 24/7, Canadians are reminded once more that truth is the first casualty of politics in Harperland.

And murder the truth.

And the good news? It's all a little too obvious. Canadians have seen this story before. Seen all the mistakes the United States made in its Great War on Terror.

His fascist bill which will do nothing to make us safer, will allow him to keep trying to provoke a terrorist attack on Canada, while claiming he did everything to protect us.

But it will also make a lot of Canadians, including some of his own libertarian supporters, wonder who is a greater threat to our freedoms, the terrorists or Stephen Harper?

And in the process of trying to destroy his enemies and the truth.

He could end up destroying himself... 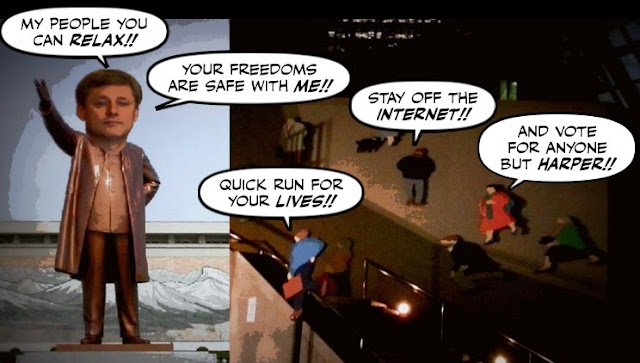 There is a defence group in government that funds all these defence research groups at universities and these groups provide all the pro war panelists and commentators we see on TV. They are conservative mouthpieces. And we pay for them to talk us into war. Can't remember what the government group is called exactly. I have it written down and when I find it I will let you know.

Jack Harris' formal complaint against Harper for misleading the House of Commons was completely ignored by Power and Politics and Don Martin yesterday.

The Government is signing agreements with powerful foreign countries which allow foreign corporations to sue Canada over our laws and regulations they don't like. This fills me with fear for the future of Canada. I could say I'm TERRORIZED by agreements signed by my own insane Government.

Can anyone say "Okhrana"?

Oh this ought to be fun. Terrorism, as defined by whom? Oh, right con harper and the rest of the cons. so do you think Del Mastro, Sona, and Duffy, or Arthur pORTER will ask the cons to declare the police a terrorist organization. well being tossed in jail can't be that much fun. The cons had better be careful with that legislation, they could be defined as terrorists and be give the toss.

If we go back a couple of years wasn't it some con cabinet minister referring to environmentalists as terrorists? How will that play out?

This is just another e.g. of how con harper plans to whip out opposition. first he audited charities which didn't agree with him, now he is going to declare those who are opposed to him and his Putin style dictatorship as terrorists.

All of this is very Putinish. Perhaps we ought to start calling harper by a new name, besides "the great economist", hide in the closet P.M., the dress up P.M., the drag queen gone bad P.M., how about: Putin Harper, putin' the boots to democracy.

We have enough laws on the books for the police and CISIS to do their jobs. Harper just wants something so he can spy on his opposition. I can hardly wait until they decide to wire tape opposition M.P.s

Harper wants to enshrine his paranoia in legislation, to make sure his rapidly escalating delusional state is catered to by the laws his poison pen drafts.

This is all extremely terrifying, any one of us could be branded a "terrorist" under Harper's proposed legislation; I can only hope it dies in courts under challenge after challenge on rights violations.
Though the cost of freedom shouldn't come in court costs to challenge the government.

"They want to harm us because they hate our society and the values it represents."

What are some good nicknames for Harper?

David you got me Rolling On The Floor Laughing [ROFL] well done my man well done a most exquisite list. Only you left out # 25 Mr afraid of cows and # 26 Mr afraid of horses # 27 Mr afraid of ranches and farms oh and I almost forgot # 28 Mr afraid of bunny rabbits eh? Oh and drum roll please # 29 Mr afraidey cat and finally # 30 Mr chicken shit warrior...

hi anon...yes I was surprised to discover about a year ago what an extensive military industrial complex we have developed, under the stewardship of out militaristic Cons. Who would blow hot air out of every orifice, and claim they they are a principled government. While selling weapons to some of the worst dictatorships in he world...

hi anon...I am not impressed by either program these days. Martin is Martin, and Solomon is becoming more comfortable and complacent with every passing day. So sadly I'm not surprised...

hi Hugh...yes, and the worst thing is that the Cons are so eager to collect those deals, so they can brag about them during the next election campaign, they are rushing them through, and making one concession after the other. I bet most Canadians haven't a clue what's in those deals, and how much of our sovereignty the Cons have give away...

hi jrkrideau...I hadn't heard of the Okhrana, but now that you mention it, I believe Jason Keney is its leader in Canada... ;)

hi e,a.f...yup you hit the nail on the head. That's my biggest problem with the proposed Con bill. How can we trust the Cons when they have called environmentalists terrorists, and would also define terrorism as anything threatens the "economic stability" of Canada. Which needless to say could be used against just about anyone. But I'm afraid we're going to have to defeat Harper before we can arrest him. We are the progressives who believe in human rights and justice. But his day will come....

hi Noah...I think you're right. I think this anti-terrorist fever is not just motivated by crass politics. I think Harper was stung by his closet experience and is both paranoid, and trying to over compensate. Either way it is a freakish show, and he is good to go....

hi Hugh...yes Harper is channeling Bush and the tea baggers these days. It couldn't sound more absurd or less Canadian...

hi David,,,,that is a good list and I must say I LOVE Dear Litre. Now just half a litre and leaking badly... ;)

those names are oh so funny! gave me a great laugh. thanks for sharing. it just so describes stevie slime. our hide in the closet P.M. he really needs a new make up artist because that shade of lipstick is not good on him, lip liner is not supposed to show like that, nor are the 4 coats of pancake make-up. He looks like a drag queen gone bad, no offense to all the great drag queens out there.