The Harperland Winter and the Madness of Stephen Harper 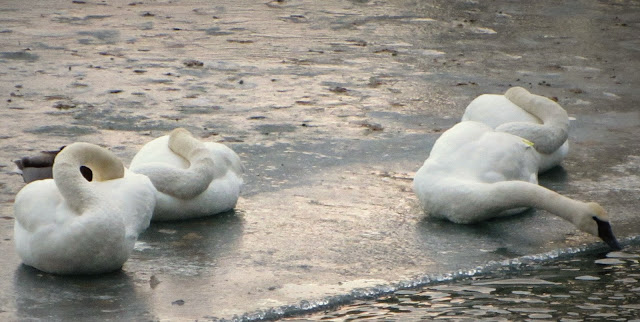 It's getting grim out there. It's winter in Harperland. The bay has frozen over so the swans are back looking for food. Like we'll all soon be doing if the Cons keep tanking the economy.

I haven't come across a cheery progressive since Christmas Day, and they were drunk.

I'm haunted by Michael Harris' line in his story I linked to yesterday:

The kiss that will awaken Sleeping Beauty is the promise of a land that is so much bigger than the single issue of the economy.

But on the other hand, when I think of what the state of the economy is doing to that other Sleeping Beauty, I feel so much better. 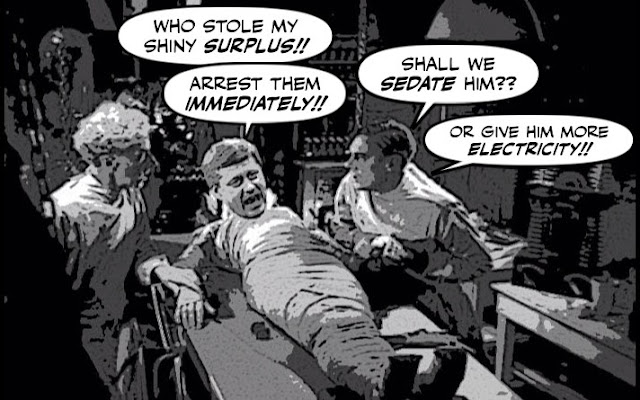 Because it must be driving him CRAZY.

It’s a cliché, of course, but it bears repeating here: One definition of insanity is doing the same thing over and over and expecting different results.

The Harper government turned deficit elimination into a potent political symbol, tied forever to its carefully-cultivated image as a sound, steady manager of the economy. Nothing else — not growth, not job creation — has played a larger role in the government’s fiscal messaging. Now that narrative threatens to collapse, and the government’s reaction to date suggests nothing but alarm and confusion.

He didn't see it coming, he didn't know what he was doing.

Prime Minister Harper looked into his magic mirror back in the fall and decided the time was right to announce major tax cuts. And as in 2008 — when he was calmly telling people that the accelerating recession offered investors an opportunity to pick up some cheap stocks — Mr. Harper has once again demonstrated his bent for letting wishful thinking infect his fiscal forecasts.

Now he's looking like a buffoon, or a maniac who would try to make us believe only he can fix the problem he helped create... 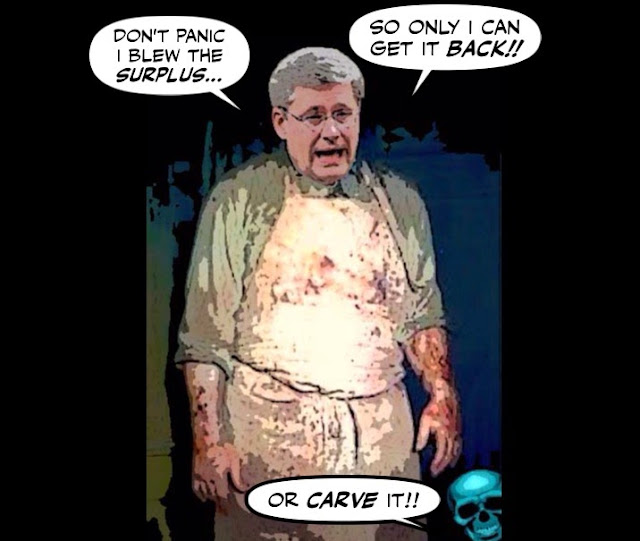 And judging from the comments I'm reading in the MSM, not fooling too many Canadians.

We have caught this Conservative dodging act before. Remember 2008/09 when they said everything was wonderful and repeatedly refused to consider stimulus spending until they were faced with non-confidence from the opposition? They then seized it as their own Canada-saving idea, cranked up the spending, and along with it cranked up the despicable Economic Action Plan advertising.

I guess the one certainty we can foresee this time is: “An April budget (maybe), part of Canada’s Economic Action Plan.”

Give them a couple more months, and by the time the election arrives so many will be so angry, he'll have to spend much of the campaign, in his favourite place... 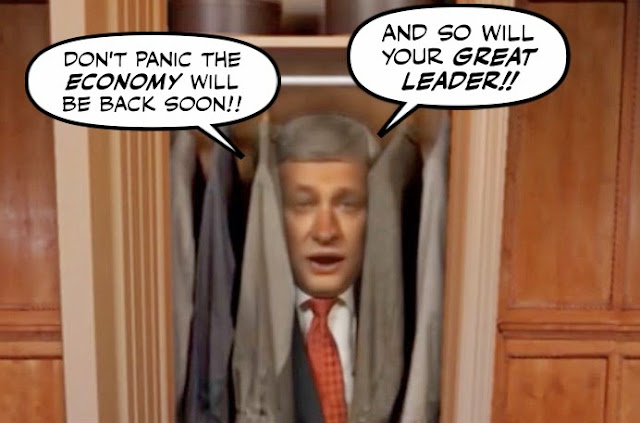 Especially when they find out that contrary to what Jason Kenney said, the Cons may raid the rainy day fund.

A federal official is distancing the Conservative government from Jason Kenney's public musings over the weekend that spending cuts might be required to balance the budget.

The official — who wasn't authorized to discuss the matter on the record — also hinted that the contingency reserve is indeed in play, given the unforeseen nature of the recent plunge in oil prices.

On the weekend, Kenney described the contingency reserve as out of bounds in that regard, and suggested the government would rather cut spending than dip into its rainy-day fund.

Which must be driving Kenney as crazy as his Great Leader... 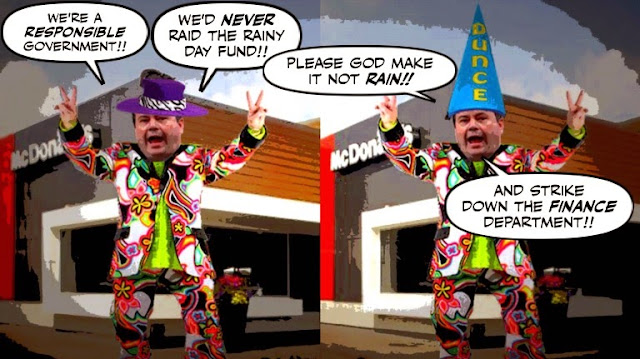 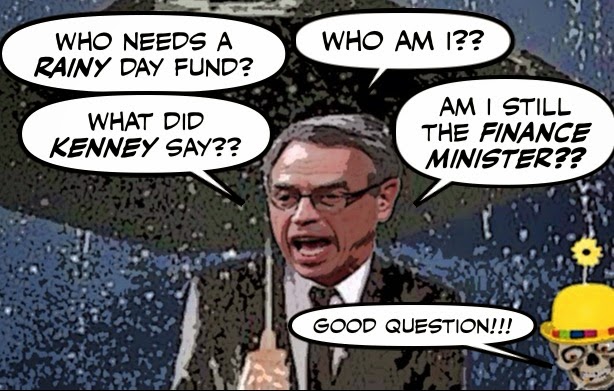 And is even more evidence that the Cons don't know what they are doing.

And when I look at the big picture, and smell their desperation in the morning.

I say to myself that it may be hell out there eh?

But Stephen Harper is going crazy.

The Con regime is on thin ice.

And the wind is in our sails... 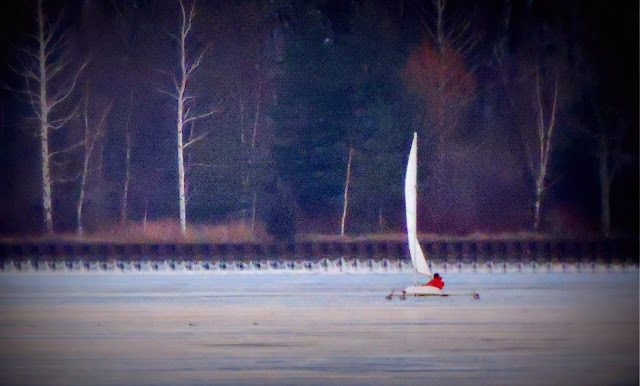 Thin ice indeed. Oiley Olly and Emperor (with no clothes or economic clues) Penguin Harper are really in a pickle having self-tarred and feathered their budget and election future.

All your eggs in one basket is clearly not sound economics. How reckless and dumb can this be... well hang on ... the Cons are now even more desperate and floundering. Sadly it can only get worse for us all as they slash and flounder. Many Canadians that were complacent and comfortable under this regime will face and now be forced into reality. The oppositions will start looking a more attractive solution to solve all these problems and hopefully the Cons will be abandoned. Too bad Canada was hijacked and forced to ride this nightmare roller-coaster. If people now wake up can have a much brighter future. Cons begone!

Harper has sold off nearly all Canada's physical gold reserves. Germany and Netherlands are repatriating 100's of tonnes of gold held for WW2 "safekeeping" in the US, but our Economist PM sells ours off for worthless US$?

Could it be that Harper sold our gold to the US so the US had some gold to give the WW2 gold back? US physical gold reserves have not been independently audited for at least 50 years, maybe longer... Interesting that the Germans and Dutch melted and re-cast the returned WW2/US gold to ensure it met "purity standards"... given the Kiev junta recently "discovered" a lot of the few bars left behind by the US-post-coup-looters were actually painted lead.... really.

The Economic [non] Action Plan grates me. On Highway 3 in BC I saw a giant billboard announcing another action plan project helping Canadians in BC. It pointed down a side road where there was supposedly a major development of some sort funded by this lie. Well most traffic on Highway 3 would not have the time to do what I did. I went down the back road that dead ended at the Kootenay river no bridge no nothing except a ranch on the right and a farm on the left normal rural. This blatant lying has got to be stopped I urge everyone with any courage not to pay taxes this year. Do it legally have them deferred there is a variety of reasons you can do that. My main goal is to quit funding the Harper-con clown show but you don't tell them that. Speak with a tax expert to see how in your situation you can do it legally. If we choke their funds it will give the other parties a better chance to defeat the rotten lying cheating criminal scum Harper-cons.

@ Anon 12:41 the infamous famous USA some years back sold some gold to China. China wanted to test the quality of the gold bars as well. They drilled bore holes through a shipment of gold bars from The Americans and guess what they found? Are you ready? Tungsten bars plated in gold because tungsten is identical in weight to gold per troy ounce. American leaders will do anything to undermine another countries economy but cry like babies when it happens to them. And the fat cats on wall street keep getting fatter fed by the Fed's illusionary paper currency as well as the big banks.

What's most disgusting is that now that Harper's total incompetence is starting to sink in to the uninformed, ass*ole will be wasting millions or perhaps billions of our dollars to spin an unprecedented web of lies to fool the electorate who are too dumb to see him for what he his. But, if the MSM start reporting all his transgressions as they should, then it's bye bye Harpo.

hi Bill...you're right about the Cons they really have made a mess of things, for us and themselves. All we need is Groucho Marx running around with an air horn, and we'd have a hit comedy show. If the joke wasn't on us, and we didn't have to pay for it. But the good news, as you point out, is that it will force some Canadians to confront reality, and hopefully that will lead to the Cons being evicted from power in the next election. Won't that be a glorious day?

hi anon...Idon't know anything about the gold situation, but since the were caught selling off the silver in some government department or other, I'm quite sure they are capable of ANYTHING....