Stephen Harper and the Ghosts of Scandals Past 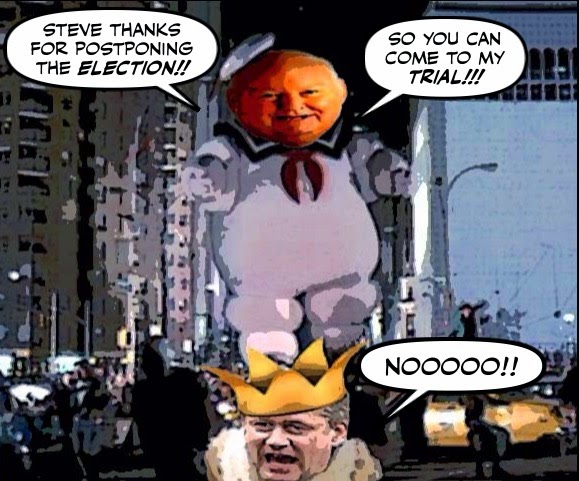 By proroguing the budget until April, and presumably cancelling any plans for an early election, Stephen Harper has guaranteed himself a visit from the Ghosts of Scandals Past.

And I'm not just talking about Mike Duffy, or Dean del Mastro who will be sentenced later this month.

Or his old friend Bruce Carson who will also have his day in court on corruption charges... 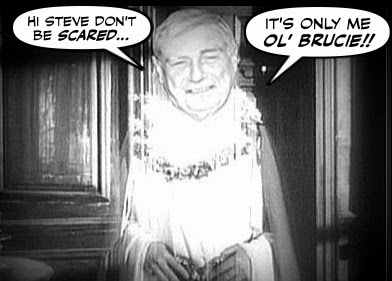 Or even a possible appearance by the ghost of Pamela Wallin.

Because now he's also facing the prospect of having to confront the ghost of Arthur Porter... 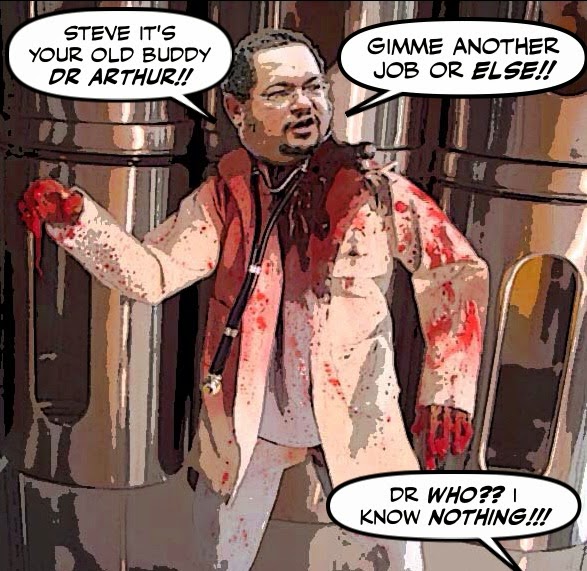 Who may be coming to visit him soon, all the way from the Big House in Panama.

Panama and Canada have reached an agreement for the extradition of former McGill University Health Centre director Arthur Porter, according to Radio-Canada. He has been in a Panamanian jail since May 2013 when he was arrested at the Panama airport on an international warrant. Porter is being extradited to Canada to face the corruption charges against him.

You know, his good buddy Arty... Who has been threatening to haunt him, or embarrass him, ever since he was arrested.

The former head of Canada's spy-agency watchdog, who received prestigious appointments from different levels of government and was nearly honoured with a street in his name, has been arrested abroad on fraud charges.

For Stephen Harper will have to explain why he was such good friends with him, and why he rewarded him so handsomely.

Porter became head of the Security Intelligence Review Committee, which monitors the work of CSIS, two years after he was appointed to the watchdog by the Harper government in 2008.

Or had him monitor those who would monitor the terrorists, and read our e-mails.

And although Harper is, as usual, claiming that he knows NOTHING... 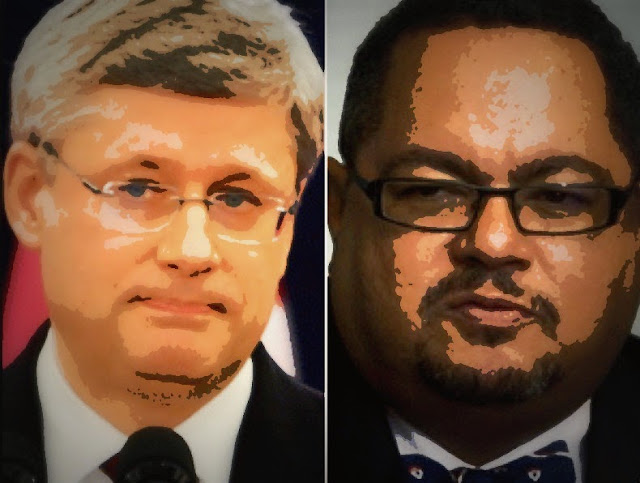 Prime Minister Stephen Harper has said Porter's alleged criminal acts had nothing to do with the work he did for the Government of Canada.

It can only remind voters of Great Leader's appalling judgement...

And his foul Con regime's ghastly record of corruption.

Which couldn't come at a worst time, just when him and his political gangsters are trying to dodge their ghastly economic record.

And Harper and his oily stooge Joe Oliver are already panicking.

Despite a slowing economy, massive layoffs, declining oil prices and general volatility, Federal Finance Minister Joe Oliver would like Canadians to know that it is definitely not time to panic. Unfortunately, even though that’s what he’s saying, almost everything Oliver is doing suggests panic has already taken root in Ottawa.

Having acted like Con artists themselves, by blowing the surplus to try to buy votes, before they even had one.

And are now clearly demonstrating that they didn't see it coming, they're making it up as they go along, and they don't know what they're doing... 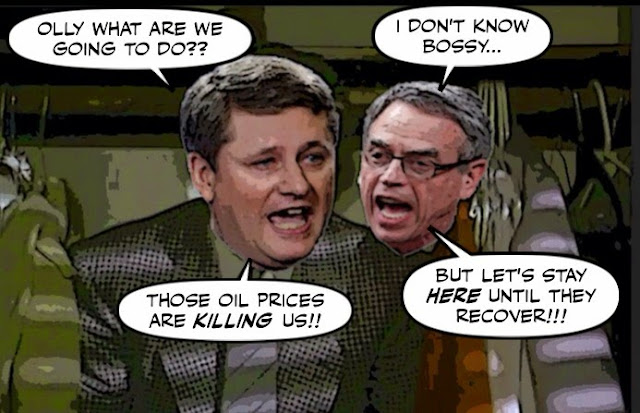 Oliver may have been looking for a respite from the normal pre-budget tension by delaying the tabling of the federal budget, hoping for a couple of additional months for oil prices to stabilize, if not rise, along with predictability on fiscal matters going forward.

What he may find is that the one thing he fears most now — instability — is the only thing he will find in greater quantity come April.

And when you add it all up, and take a look at the big picture, and combine all that incompetence with all those scandals, something else is also clear:

He can run as fast as he can, and he can deny as much as he can.

But he will not escape his monstrous record.

And as I've said so many times before.

It will DESTROY him... 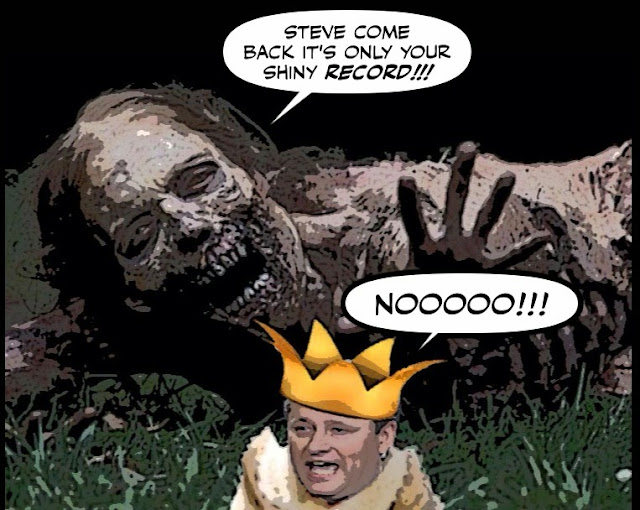 What's so alarming about all of this is just how powerful these harper appointees are, the likes of Arthur Porter in charge of the country's security is deeply troubling as are the self-entitled parade of perps that Alison so eloquently put together for us.

What a great group photo of "The Harpranos" criminal group. The scary part is it's probably only a tenth of what's out there doing Harpo's dirty deeds for him.
I swear the day we boot him from office, I will drive by 24 Sussex all day with "Good Riddance" written all over my vehicle and if he comes out of his closet, I'll salute him with both birds flipped.

In reference to Joe Oliver's explanation for delaying the budget. Is there anyone, as old as I am, that was not instantly reminded of Don Knotts' stand-up routine on the Steve Allen Show , back in the stone age of TV ? Try You Tube and see if anyone has put up a sample; you will see what I mean. Yours truly, Granny Betty

Suncor Calgary based oil company and bitumen developer just laid off 1000 people how is Harper/Oliver going to explain that to Calgarians? I suppose in their fundamentalist view god is punishing the 1000 for trespasses against Stephen Harper's fundamentalist terrorist heaven or is it haven?

Oh boo hoo Mr. Prime [not] Minister hah. That is a thousand extras that will not be voting for you!

hi bcwaterboy...you are right about the threat posed by some of those Harper appointees, like that new judge he appointed for his anti-gay views. There were warnings about Porter even before he got the job of supervising that new super hospital in Montreal, a project I was very interested in, since it replaced among others the Royal Victoria Hospital a place I know well. So I really can't believe that a man like that should have ended up in such a powerful position supervising CSIS of all things. It's absolutely mind-blowing, I feel that there are things we need to know about the Con connection, and I'm looking forward to Porter's trial. As for Alison's perp list, there is no better one, and only one Alison....

hi anon...yes it is a great list, and the brilliant Alison has had to work hard to keep it up to date. As for celebrating the day the Con regime, I once made the foolhardy vow to run naked down St Catherine's street in Montreal the day it did. But I am a bit older and wiser now, and I think your celebration sounds more reasonable. ;) I will however party for days or until I collapse from exhaustion for it will be a glorious day....

hi granny Betty...I'm not familiar with the clip but I will try to look it up, and Joe Oliver's explanation certainly was a comedic routine. Nothing can hide the fact that they are desperate, and they are making it up as they go along. But hopefully most reasonable Canadians will see it for what it is, and they will make the Cons pay for it when the time comes....

hi mogs...in my previous post I did say that I hoped that some Albertans might realize that the Cons have led them astray, and stop voting for them so religiously. A couple of my friends have mercilessly mocked me for being so optimistic, but all things considered I'd rather live my life that way in this sometimes gloomy country. And who is to say there isn't a pony under that heap of manure or bitumen? ;)

hi David...that's a good question, and I believe the answer is because electoral fraud isn't taken as seriously as financial fraud. Not that it's taken that seriously either. But Elections Canada has neither the laws or the tools to properly protect our democracy, and that is an absolute scandal...

Simon I still love this it is one of my favorites:

"Why is everybody all bitchin' bout the bitumen?
Don't you like rich men turnin' into richer men?
Solomon, whose agenda you followin?
Typical liberal lamestream politics!..."

And Simon I love to see that blow up in EZ and Harpers face hah.