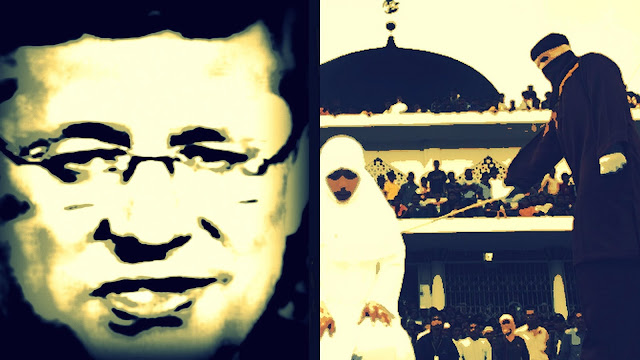 Yesterday he declared that an "international jihadist movement" had declared war on Canada.

And claimed that only he could save us.

But who will save us from his good friends the Saudis? The beating heart of the jihadist movement.

A Saudi Arabian blogger has been publicly flogged after being convicted of cybercrime and insulting Islam, reports say. Raif Badawi, who was sentenced to 1,000 lashes and 10 years in jail, was flogged 50 times. The flogging will be carried out weekly, campaigners say.

Because for them and Great Closet Leader, who would call himself a human rights champion, it's just business as usual. 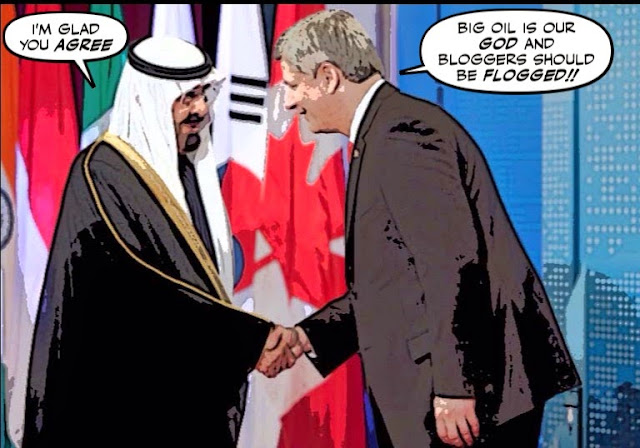 The federal government has helped secure a $10-billion US deal for a Canadian company to sell armoured vehicles to Saudia Arabia, a country widely condemned for its human rights abuses.

Despite the corruption of the Saudi leadership, and its appalling human rights record.

Saudi Arabia permits beheading and stoning as forms of criminal punishment for murder and rape, alongside social crimes such as adultery. Homosexual acts are also punishable by death, flogging and imprisonment, as is drug use. Saudi Arabia is also regularly condemned for its treatment of women, who will earn the right to vote in 2015, but who will still be disallowed from driving cars — or armoured vehicles, for that matter.

Or the fact that Osama Bin Laden and most of the 911 terrorists were Saudis, and that backward kingdom is the biggest backer of violent jihadist movements all over the world.

Still our Harperite cult, and its sorry stooges like John Baird, would prostrate themselves before them. 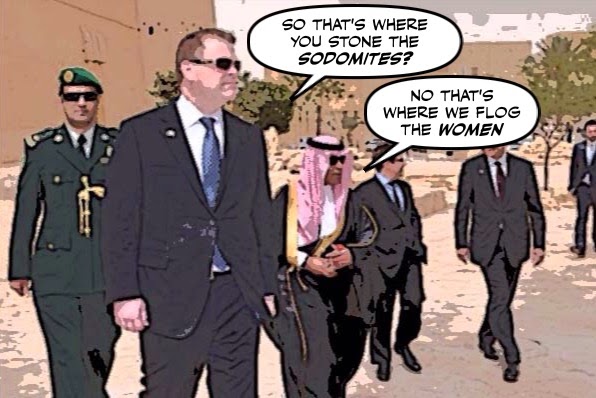 Ottawa hasn't hidden its affinity for the Saudi royal family. Baird praised a deceased prince for "dedicat[ing] his life to the security and prosperity of the people of Saudi Arabia" and another as "a man of great achievement who dedicated his life to the well-being of its people."

"I am very bullish on where the Canadian-Saudi Arabian relationship is going," Ed Fast told the Saudi Gazette in August. On his second trip to the country in less than a year, Canada's International Trade Minister boasted about the two countries' "common cause on many issues."

And this is the bottom line: the Cons are in bed with the most reactionary barbarous Islamist regime in the world. The ones who created Al Qaeda and ISIS, the ones who fund terrorist groups all over the world. And anything the Cons say on that subject just reeks of hypocrisy.

As does anything they say about democracy.

And if we believe in freedom, and are all Charlie. 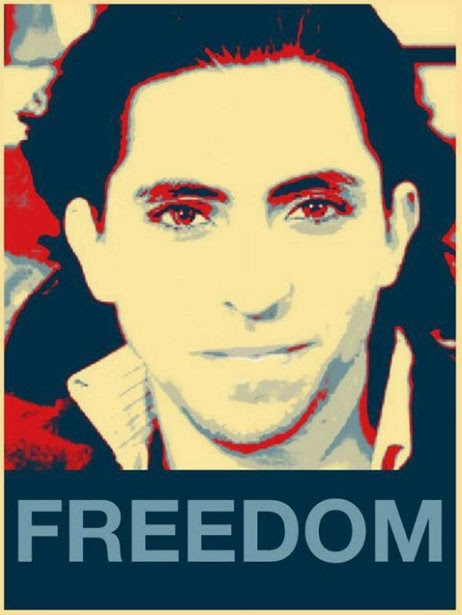 And don't forget the bloodthirsty, insanely barbarous zion regime that harpo and bairdy-boy suck off every chance they get. Talk about three of the most monstrous and sadistic regimes the world has ever seen and there you'll find the cons making sure their bread is buttered on both sides because of their 3-faced associations with China also.
I can't believe we've let harpo take us this far down in the eyes of the world let alone our own people who seem to sleep through every new outrage and atrocity he commits. WTF??? Thwap's right. Fuck us. We deserve evreything harpo can do to us because WE LET HIM!

hi anon...I think I've made my feelings about Netanyahu and his reactionary war criminals pretty clear. All those fascists are cut from the same cloth, brutish, ignorant, and violent...

It's amazing what you'll condone from a family that just inked a deal for $15-billion worth of democratic-dissent suppression light armoured vehicles. You'll happily cozy up to an outfit that flogs women for the crime of driving or beheads individuals for sorcery and enforces the death penalty for aposty. That these same people also funded 9/11, al Qaeda and ISIS really is no big deal between two petro-states.

Simon: we can choose whether or not we want to support this by looking at where the production is occurring, not where it's going. Most of the GD vehicles are made in London, Ontario. What are we doing to ask our neighbours why they condone this?

The Raif Badawi story has really hit me hard, harder than most stories of insanity, and I don't know why.

I was actually despondent all day Friday after reading that the whipping had occurred and will go on as scheduled.

Other than a letter (e mail) to the fucking Cons I don't know what else I can do.

hi Mound...it is indeed amazing and disgusting. Our "freedom loving" Cons in bed with the Saudis. One of the most brutal and reactionary regimes in the world, that has funded more jihadist groups than one can count. I can never forget how the Saudis funded the savage bombing campaign in Iraq that among other things killed one of my greatest heroes the UN's Sérgio Vieira de Mello, who could have done so much to help make the world a better place. And of course the ironic part is that it is the Saudis who have chopped
the legs off the Cons precious oil industry, And still our dumb Cons would genuflect before them...

hi anon...I realize the vehicles are being made in London, in an area that has been hard hit by closures of auto industry factories. And I certainly would hate to see Canadian workers hurt. But the arms industry is not one I could ever support, and if the Cons had an industrial strategy we might have found other jobs for them. And as for selling arms in the Middle East to the most reactionary governments, I find it both criminally irresponsible and totally obscene...

hi anon...I share your horror. I can't imagine a more brutally depraved punishment. It absolutely sickens me and I feel for him and his poor family. But don't give up, write to your MP, sign the Amnesty petition. I intend to keep covering this story as long as is necessary, and if I find other ways we can put pressure on those beasts I will be sure to share them...

I put a short story on Daily Kos Sunday and I had to link to your blog.

I can not explain as to why the story of Raif Badawi has hit me so hard, but it has.

I had read of his sentencing in the past (May 2014) but hadn't given it much thought until Friday.

As a French/Irish Canadian some may think it odd that I would feel so demoralized over the enforcement of this sentencing but I can't get the picture of him being whipped, for something all of us wouldn't hesitate to do in a millisecond and the helplessness of my meager protest by signing the Amnesty Intl Petition, or the one I signed to our Conservative Government.

I must reflect to another Canadian blogger who may be expressing my anger better.

“We don’t think he can survive this,” said a tearful Anne Sainte-Marie, a Montreal spokesperson for Amnistie internationale Canada francophone, one of the groups working to free Badawi.

But despite this the Harper Cons have remained totally silent.

“His wife and children have received tens of thousands of cards and letters of support from around the world, and this amazing solidarity gave us hope that we could get Raif released from prison before this punishment started,” Sainte-Marie said.

“But no. Our government has not condemned vigorously enough Saudi Arabia’s recourse to extreme corporal punishment. It is beyond outrageous that this country, one of our trading partners, is imprisoning and torturing a blogger.”