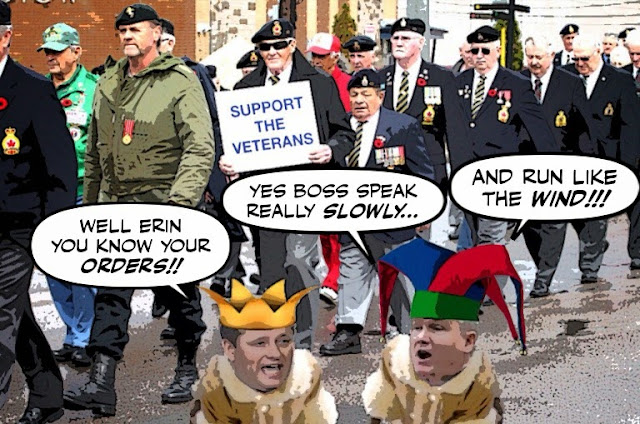 Last week I predicted that Erin O'Toole, who replaced Julian Fantino as the Con Minister of Veteran Affairs would turn out to be no better than his predecessor.

Or just another Harper stooge.

And sure enough it hasn't taken long for him to show his true colours.

Newly-appointed Veterans Affairs Minister Erin O’Toole has informed an advocacy group for wounded and psychologically injured veterans that it is no longer a stakeholder adviser to the Veterans Affairs department.

Mike Blais, who helped launch Canadian Veterans Advocacy in 2011 to advocate for veterans and serving Canadian Forces members who did combat tours in Afghanistan and their families, told The Hill Times that Mr. O’Toole (Durham, Ont.) gave the bad news to the group in a voicemail he left on Mr. Blais’ phone service Jan. 7.

Last June, Mr. O’Toole said in the House of Commons that Canadian Veterans Advocacy is run out of the Parliamentary office of NDP MP Peter Stoffer (Sackville-Eastern Shore, N.S.).

“As a veteran myself, I have been quite offended by some of the work that group does. It is not sincere. It is not based on sound policy. I understand, at committee, that they have acknowledged that their funding has come from unions,” Mr. O’Toole said on June 2.

Mike Blais, who has served our veterans and our wounded warriors admirably, couldn't be more right.

“We have been a leader at that table for the voice of the wounded and now Mr. O’Toole is cutting us out of the loop because he doesn’t like, or suspects or whatever, that we have union ties and that we do not speak for the wounded. That’s crap,” Mr. Blais said.

And as for me, I'm predicting the O'Toole story will end the same way as the Fantino saga did... 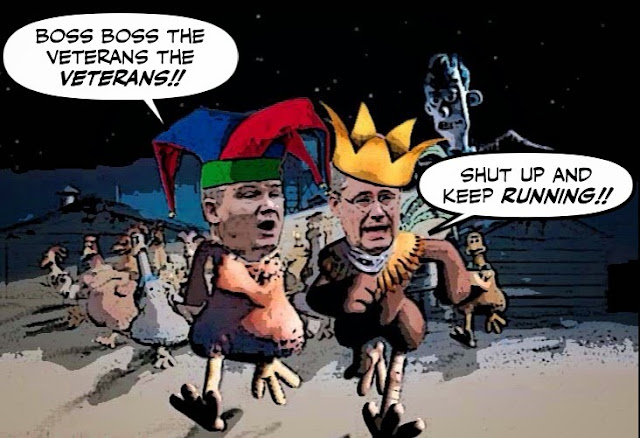 They can run, but they can't hide.

And we'll meet them on the campaign trail...

If Harper can not find someone new to throw under the bus for this latest slap down and the Veterans stay united the Cons will have to retreat again. Harper hates to lose and has proven he will out corrupt his nemisis, secret mentor? V.Putin to stay in power.

Highlighting Harper's massive transgressions and ruthless "party of one" rule by Veterans groups and other coalitions will be his and the Cons undoing.

It was mentioned in the media when he was appointed that O'Toole was a staunch supporter of the Conservative line on veterans. That being said, why bother with changing Ministers. Such sleight of hand isn't likely to work.

BTW - I find it interesting that the Harper Cons expect the members of the Canadian armed forces to fight ISIL, or whoever, for them, and then once they are "veterans" they can basically go to hell.

Won't Get Fooled Again --The Who:

"Meet the new boss
Same as the old boss"

Right across Canada, at all levels of government, we have corrupt politicians! Man's Greed will destroy us all......sooner or later!

Fear-mongering and the creation of false flags are just tools to "keep down the masses"!

David you got it man!